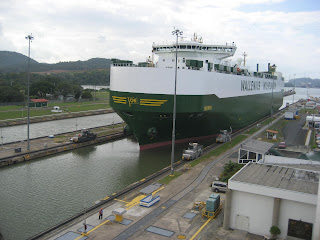 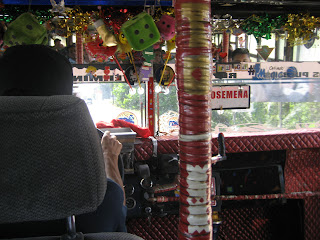 We've been in Panama City for a couple of days. After arriving at the airport instead of taking a taxi into town, we got darring and found the bus. So instead of a $30 ride it cost us all of .50 cents. The first day, we just had time to get the lay of the land.We took a long walk around town and the shoreline and had dinner and a bottle of wine from Argentina.
Today we went to see the canal. Very interesting to see huge ships go through the locks with a spare 2 feet of room on each side.
Tomorrow we've got one more day in Panama City and then we're off on a short plane ride to the San Blas Islands on the Caribbean side where we'll stay on several islands for four nights.
Posted by George at 7:16 PM 1 comment: 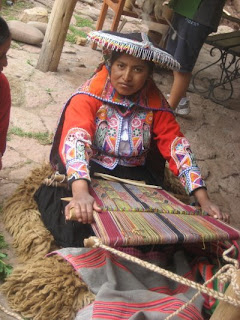 No, this is not Diane - but it is Peru, near Lake Titicaca. 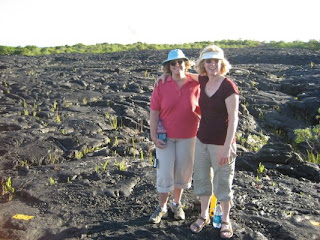 Jill and Diane standing on lava flow on the Big Island in Hawaii.
Posted by George at 8:05 PM No comments:

Email ThisBlogThis!Share to TwitterShare to FacebookShare to Pinterest
The Mission near Tucson, Arizona 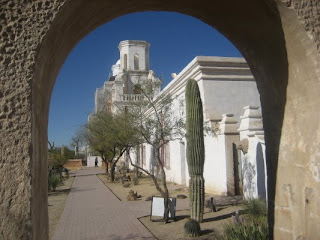 In Quebec near the Frontenac Hotel and along the St. Lawrence River 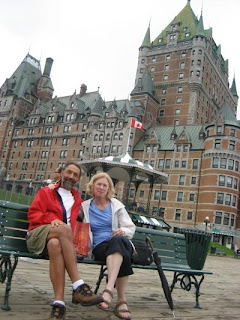 In Montreal at the Int'l Jazz Festival 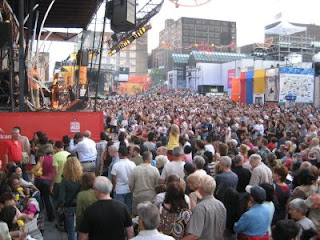 Anthony, Alison, Diane and I 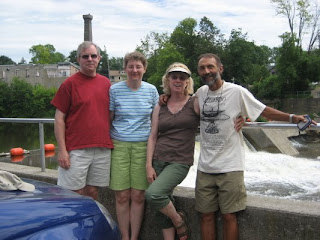 Moira, me and Diane in Toronto 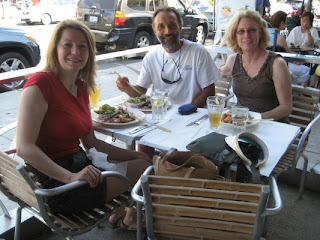 Posted by George at 7:58 PM No comments: 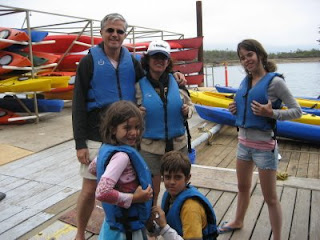 Gys, Paloma, Julia, Diego and Marina in Los Osos after kayaking in the bay. 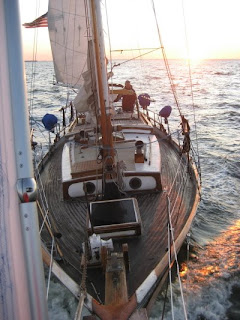 Sailing in the Chesapeake 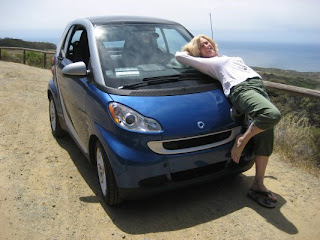 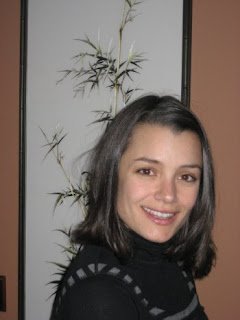 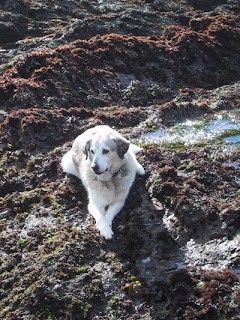 Sydney at her favorite beach spot
Posted by George at 7:46 PM No comments: 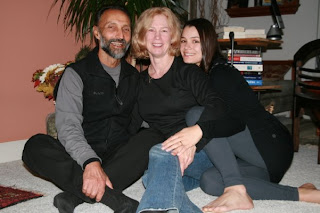 In keeping with the spirit of winter, the California Central Coast actually complied and got down-right cold this past week. We've seen temperatures dipping into the low 40's - Californians consider that well below freezing and a perfect time to curl up with a book in front of a cozy fireplace.

Let me begin with a brief recap of the year. Diane definitely had the upper hand in trips this year. First, she got a chance for a special spring trip that took her to Peru. She and our friend Nelly, who teaches high school Spanish, took several of her students to visit Machu Picchu and Lake Titicaca. I was reluctant to go because the thought of traveling with a bunch of teenagers in combination with rigid tour schedules wasn't my idea of a vacation. As it turned out, the kids behaved wonderfully. And having Nelly there (a Cusco native), proved to be very advantageous. Diane had a fabulous time and looks back on it as an experience of a lifetime.


Later on in the year Diane took a trip to Hawaii to visit Jill, a friend of ours from our sailing days. Jill lives in Oahu right on the water. Needless to say, it was a nice diversion for Diane. For a little weekend R&R they set off on a plane ride to the Big Island where they had a chance to see hot lava flowing into the ocean.
For our 2008 vacations, we stayed closer to home more than we typically do, venturing out only as far as Canada and Arizona. Our first trip in January was to visit our friends Alan and Patsy in Palm Desert. We then set off to Arizona to visit Paul and Hank. One of the interesting sights they took us to was the historic Mission San Xavier del Bac., dating back to the late 1700’s. Later on in the year, Paul and Hank visited us, staying on to look after Sydney as we left for Canada.

Our first stop was Quebec to visit long time friends, Pierre and Claire. This trip had been in the planning since 2000, when we were visiting and Pierre mentioned that we should plan to come back and partake in Quebec's 400 year celebration in 2008. With Pierre and Claire's hospitality, we were able to easily enjoy Quebec's summer festivities, celebrations and simple walks along the St Lawrence River boardwalk and throughout the cobble stoned streets of Vieux-Quebec.

From Quebec we left for Montreal via train. We spent a couple of exhausting days there at the International Jazz Festival. Not that we're real jazz aficionados, but this truly is a unique festival. Montreal closes off several blocks in the midst of the city, converting it into a wonderland of jazz and off-beat music. Our favorite group we listened to was the Mystery Trio, a drummer and two highly accomplished guitarists. They played a blend of jazz infusion and then they’d tear into breath-taking guitar riffs.

The rest of our vacation was spent in Toronto and Mississauga, visiting with family - Moira, Alison and Anthony, and Elsie. We spent time touring, eating and talking (not necessarily in that order). We always enjoy Toronto’s eclectic neighborhoods and the lake walks that we take in Mississauga.

During the latter part of the summer, we had a brief visit from cousin Gys, Paloma and children Diego, Julia, and Marina. They were over from Spain, touring the U.S. from coast-to-coast. We enjoyed having them over and getting to know their children. Particularly fun, was Diane's idea of having our friend Tom give the kids a surfing lesson. What could be more Californian? The water was cold, but the kids didn't seem to be bothered in the least by it.

In September, I flew to Philadelphia to visit my friend, Wes. For a few years now we have been sailing together on the Chesapeake Bay, first on his 30’ sloop Blue Fish and now on his 41’ ketch, Belle Hellen. This year we took ten days and put many miles under the keel. On a typical day, we would sail around the bay during the day and find a nearby anchorage at night. Our ports of call were such exotic places as the Sassafras River, Annapolis, Baltimore, Oxford, and Solomon Island. Aside from shredding the headsail and running aground a couple of times, the adventure was picture-perfect.

Another highlight for us this year was November 4th. Yes, it did happen to be my 59th birthday! But of course this year it was more exciting because the day happened to coincide with the presidential election. It was absolutely astounding to experience the Obama win!!! We celebrated until the wee hours of the night.

But Mr. Obama was not to be the only one to be voted in as president. This year Diane was instated as the new president of the California Community College Health Services Association. It is quite an honor and a well deserved culmination to her career as a college nurse. The drawback to all these accolades is that she's finding that the responsibility of running the college health center and being president of the nurses association involves a whole lot more hours than there are in a week!

This year, Diane decided to splurge on a new car. We had driven this model several years ago in Europe and were really impressed with its handling, room and, above all, smart looks. When Diane heard that they were going to start selling them in the U.S., she felt compelled to have one.

Meredith too has been hard at work. She continues to chip away on her master's in public health at UC Berkeley and will be graduating in May 2009. She's been fortunate to get scholarships to help pay her tuition and has been working as a teaching assistant. This is not just wiping the blackboard for the professor after a lecture. She teaches an undergraduate class of 70 students, grades papers and tests and must keep office hours. Also, Meredith has been involved in researching policy issues and how they can foster and promote healthier life styles for a population. She is using the Netherlands as a model.

The only sadness that we dealt with this year was the loss of a long time companion, our dog Sydney. She was with us for nearly 16 years, always making each day just a little better. Her gentle spirit will not be forgotten.
In conclusion, we hope that 2009 brings you all a lot of joy and health. We are looking forward to new adventures and hopefully will meet up with some of you along the way.
Posted by George at 7:04 PM 1 comment: