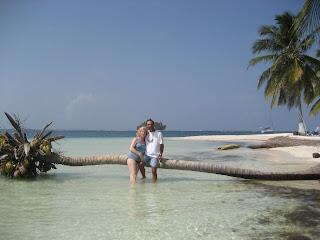 The San Blas Islands (Kuna Yala) are beautiful and unique. That said, they're not for everyone. The accomodations are primitive but provide shelter, a crude bathroom (toilet is a place to sit at the end of a dock with an opening to the water below. The shower is a barrel of rain water with a half a coconut to pour over yourself).

The typical deal in the San Blas Isles is that you go to an all inclusive hotel on an island. This also includes a snorkel trip to an outlying island. Some people just hang out at the beach and sun themselves while others explore and swim. The hotels do this mostly because their island's shore is not clean enough to swim in or it has been overbuilt and there is no room for beaches.

We moved to another island almost daily. One we went to had a typical Kuna village on it. Again, they were very welcoming and got us a room quickly. Mind you, even though these rooms tend to be very primitive thatched roof and walled places, in which you can hear your neighboring room guest snore. At times it was like an echo when several guests were snoring. Rooms are not cheap. They tend to run $40-60 per night per person, including the basic meals.

One bothersome thing is that the Kuna indians expect to be paid one dollar when you take a picture of them. I was taking a picture of a group of people dancing when some kids jumped up and started demanding $5. So I put the camera away and walked on. I wanted to take a picture of what one fisherman caught, and he asked for a dollar!!! I just turned around.

At one of the hotels we talked until late in the evening with a German about kuna culture and got lots of input from Eliese, a Kuna, who runs the hotel and is the principal of the school too.

This morning we were awakened very early in the morning (5am) by Elise. Without so much as a cup of coffee, we got our clothes on and grabbed our bags and jumped on the boat. It was still dark outside though it was a starry night with the Southern Cross clearly visible. We bumped out of the area where the boat was docked hitting some reefs along the way. But soon we were well under way clipping a nice 20 knots or so with even higher speeds when we got help from a swell. Having been a blue water sailor for many years, it occurred to me what a tenuous situation we were truly in. There were not navigational aids to speak of aside from the stars and one antenna that could be seen. We had no lights on the boat and only had a 15 horse outboard. No life-jackets. No compass. Just an old wooden boat, a crew of two and four passengers. If a swell capsized us, the only thing we would have going for us is that the water was warm. Needless to say, my worries were unwarranted. We made it with plenty of time to spare.

The rest of the day we spent flying to Panama City, then catching a cab to the bus terminal, finding a bus to Santiago for a 3 1/2 hour ride. When we got to Santiago, we found the bus for Santa Fe. It was only 54 km away but took 1 1/2 hours because of all the stops he made.