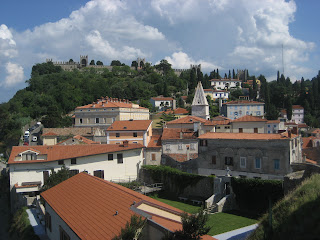 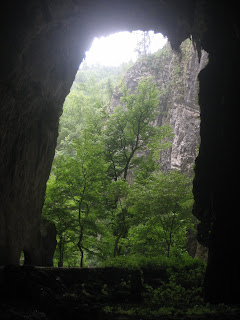 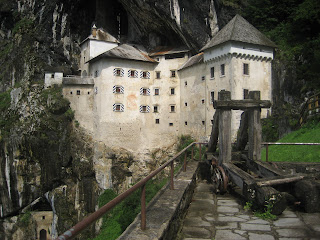 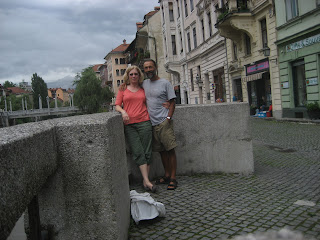 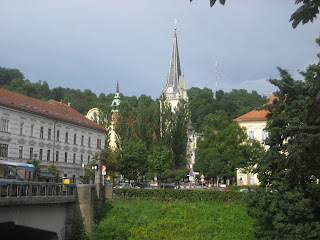 We took an early morning train from the Prien station, near Bernau. Our first stop was Salzburg, Austria. The train then headed onward past idealic Alpine mountain villages in the Austrian Alps, along emerald green rivers and waterfalls, verdant meadows and other villages, some that were in the clouds. Truly quite spectacular. We both got a little sleepy but I tried to not shut my eyes not wanting to miss any of the grand scenery. At one point, a number of passengers got off. It was at Bad Hofgastein, which looked like a ski village (sans snow). We changed trains near the Slovenian border at Villach.
We arrived in Lubljana in the pouring rain. Diane waited at a bus stop with our baggage while I checked a few places for rooms. They were booked. We ended up finding a nice youth hostel (H2Ostel) right along the Lubljanica River, very near the old city center. Lubljana sits on a site that has been inhabited since the Celts and the Romans. There are beautiful bridges along the Ljubljanica River. One of the bridges is the Triple Bridge, or Tromostovje, that consists of a main bridge and two parallel bridges originally intended for pedestrians. There's also the Shoemakers' Bridge that once was a gathering place for the city's cobblers. Very noticible is all the construction that's going on and the beautification projects. You really get the feel that this city is on the upswing in trying to attract tourists and their money.
In the morning we took the funnicula up to the castle. It was a scenic ride up but the castle itself was not much since they mostly they are busy restoring it. There are lots of sidewalk cafes along the river, ice cream venodors, bars, restaurants and shops. We noticed that at 5-6pm, they are all pretty much empty. But by 8pm things start picking up. Here, people only start going out later in the evening, much like in Italy or Spain.
We booked a tour for Thursday to the Adriatic port town of Piran, which included a visit to a castle and a cave. Our tour guide was Sabina, a young Slovenian woman who spoke good English with an easy going personality. We were picked up with a large van - a total of five of us. Good group. Our first stop was the 700 year old Predjamski castle. It is a dramatic castle shoe-horned into a limestone cave. The story goes that the man who built, Erasmus Leuger, stabbed a relative of the emperor. He then fled and along the way started robbing many of the wealthy. At that point, the emperor (one of the Habsburg's) got the governor of Trieste to have him arrested. It took a year to capture him because the castle was pretty secure. But the job was finally done when they were able to cannonball Erasmus as he was sitting on the toilet. As always, a servent had betrayed the master.
Our next stop was the Skocjanske Jame (Caves). After we started going into the cave, it looked like some of the others we had seen with the typical limestone columns of stalegtities and stalegmites. But after we entered the second large chamber we started hearing the roar of water. It was an underground river. At first we saw a bit of the river from afar. But a few minutes later, the roaring river in this cavernous space was fully evident. It was a Lord of the Rings setting. We walked on a bridge and looked nearly 500 feet below to the roaring river. Our guide told us that the river entered the cave just up ahead and went underground all the way through Croatia and part of Italy to dump into the Adriatic Sea about 75 miles from where we stood.
After coming out of the cave, we had to walk quite a ways back up. But the views continued to be spectacular. It was an awesome experience, comparable to that of the Grand Canyon.
On our way to Piran, our tour guide told us that the road we were on was once known as the Amber Road. It was built by the Romans almost 2000 years ago. Before that, this area was occupied by the Celtic tribes.
Piran was a typical Italian or French quaint Mediteranean harbor town. Very charming. Diane and I walked all through the small cobble stone streets and ended up at the church of St. Georg, which had a panaromic view of the entire harbor area. After a bit more walking, we finished our tour at a local pub, sitting down with a glass of the local red wine, Refosk.
Earlier on we had tried Terano, which is the same grape that's used to make the Refosk, but is grown in a red clay soil about 30 miles north east. The Refosk tasted a little fruitier with more body and structure, which may be because of the warmer climate. I did enjoy the Refosk more. Undoubtedly this will require more research.
Tomorrow we're off to the town of Bled. It has a story book castle on an island in the middle of a lake. Stand-by.
Posted by George at 1:55 PM No comments: 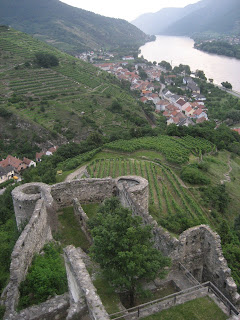 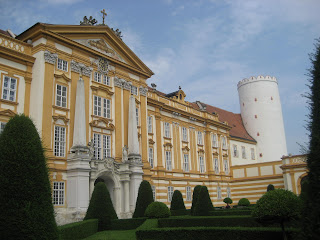 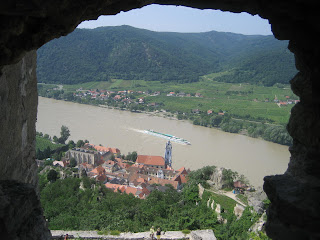 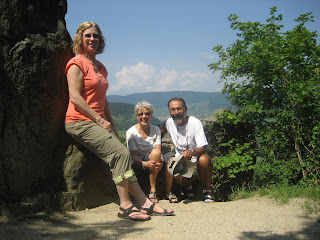 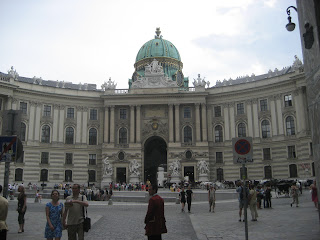 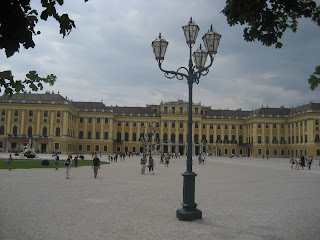 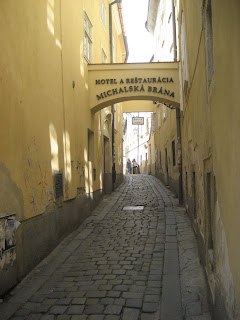 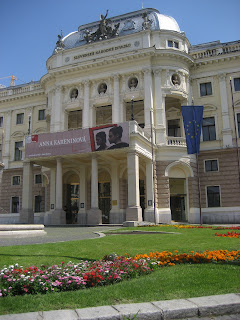 Per plan, Erika was there to meet us for the drive to Bernau. After our traditional walk at the Chimsee Lake and a day of rest, the three of us were on our way to Vienna. Our first stop in Austria was Spitz, a smal town along the Danube River. We found a small winery and tasted nice white wines (Gruner Veltliner, Weissen Burgunder and Riesling). We also tasted a light red wine called Zweigeld. We stayed in a small Gast Hause (guest house) near the winery. After getting settled, we went for a walk to the ruins of a castle that dates back to the 1200 and overlooks the Danube. Quite spectacular.
The next day, we back-tracked a few miles to cross the Danube to the Melker Stift. It is a huge monastary built in the 12th century that rooted its teachings St. Benedict and was later turned into a monestary and a school (which is still is today). After the visit we continued on the Danube wine trail and spent the night at another guest house in Weissenkirchen in Wachau. Our room had a panoramic view of the area and of the Danube.
When you meet an Austrian, he or she will typically greet you with a "Gruss Gott", which means Greet God. I started saying it too but got some interesting looks when a couple of times I mixed up the main vowels and said "Gross Gut". I tried. Diane just said "hello."
Vienna is a cosmopolitan city with wide boulevards, beautiful parks and lots of coffee houses. It's the home of Mozart, Strauss, Beethoven, Haydn, Schubert, Wagner, the Waltz and of course Apfel Strudel. The ubiquitous coffee houses are viewed as an extention of the Viennese living room. Vienna dates back to the Celtics and the Roman Empire. But most of today's beautiful architecture is due to the the Hapsburgs and others who ruled the area for latter centuries.
Some interesting facts we learned: Beethoven lived at eighty different addresses, mostly because he liked to play piano until late at night and he often didn't pay his rent. Napoleon occupied Vienna twice before being exiled to Elba. He married the daughter of the Austrian emperor and she bore him a son who the Viennese were very proud of. Unfortunately he died from a lung disease at twenty-one. The Danube is very important in this region because it was strategic in trade and transportation between the West and the East. It also marked the bounderies between countries. Vienna is the home of Freud and psycho-analysis. Freud's couch, however, now resides in London. Vienna is the only European capital that grows grapes and makes red and white wine. The Third Man, with Orson Wells was filmed here, part of the scenes being filmed at the ferris wheel.
One of the more impressive palaces we saw was the Schonbrunn Palace, the home of Emperor Franz Joseph and his wife Maria Theresa. Both were interesting people in that he considered himself to be the people's public servant and worked tirelessly towards that goal. She in her independent approach to her position as a dutches. Together they had 16 children, in which the daughters were always married off to build strategic relationships between countries.
After Vienna, we went to Bratislava (Slovakia) for the day. Also on the Danube, Bratislavia is the capital. We only went to the old city - nice, compact with a lot of charm, but nothing out of the ordinary. After seeing so many charming towns, one can get dispassionate to the sight of yet another cute town square, a majectic castle, a beautiful cathedral or yet another ornate "rathause" (city hall).
Tomorrow we are taking the train to see some of the countryside of Slovania, ending up in its capital of Ljubljana.
Posted by George at 2:33 AM No comments: 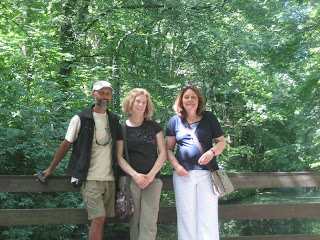 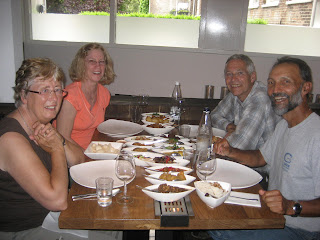 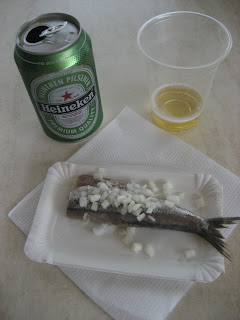 Diane and I flew to the Netherlands separately, she from California and I from South Carolina. We met at the Central Train Station in Den Haag. We each had a walkie-talkie, that we used to find each other.
Den Haag is a comfortable city. It's easy to get around and we know it well. We stayed at the Centrum B&B, a short walk from the train station - nothing fancy but very convenient. We toured the city center, took the tram to the Schevenigen boardwalk and enjoyed a fresh herring at the harbor (downing it with a Heineken). On our second day we met with my Dutch cousin, Anke, walked the Den Haag Woods to her apartment and had a traditional "rijsttafel" dinner together near Anke's home. Unfortunately, we didn't abide by the saying that you don't eat Indonesian food at a Chinese restaurant (and visa-versa). At best, I would say that dinner was mediocre and lacked Indonesian authenticity. Live and learn.
In Amsterdam we stayed with our friends Maria and Maarten. Together we went into Amsterdam to the Rembrandt Museum's exposition of Jan Lievens, a friend and colleague of Rembrandt. Afterwards, our friends' son, Geert, picked us up in his small steel-hulled skiff to cruise the Amsterdam canals. We stopped along the way and stocked up on Heinekens and chips. A perfect way to spend an afternoon in Amsterdam. After the canal cruise we had a fabulous and more traditional Indonesian "rijsttafel" at the Blau restaurant. There must have been twenty or so dishes, each with a unique flavor. We devoured the entire meal as if we hadn't eaten in a week. Afterwards we met up with Geert and Fanilla for an after-dinner drink at their home. All-in-all, a nice way to conclude our visit to Amsterdam.
The following day Maria and Maarten were kind enough to drop us off at Schiphol for our flight to Munich.
Posted by George at 2:12 AM No comments: