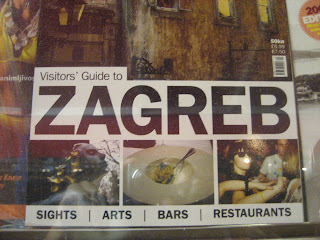 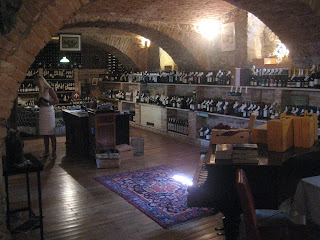 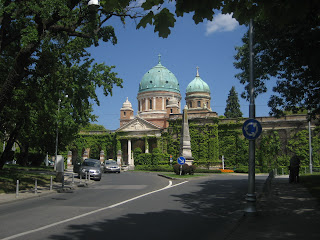 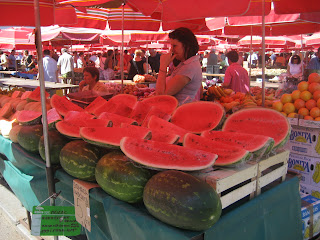 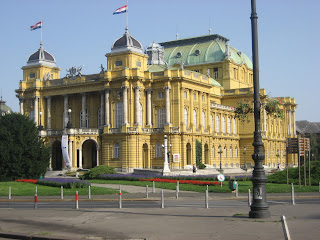 We arrived in Zagreb in the early evening. After finding a couple of hostels with no vacancies, we decided to check into a 3-star hotel for $110 a night - not usually our style, but it was getting late and we were tired of looking.
After getting settled in, we walked along a beautiful series of parks and buildings about one kilometer long towards the main square in town (Trg Jelacica). Past that there are dozens of outside bars and restaurants. It seems that people here really enjoy sitting at an outside cafe/bar with a beer, a coffee or what ever - often it is a couple of young women. There seem to be many more women around than men.
The following day we called a youth hostel run by an Austrian lady. It was a tram ride away from the central city, but was quiet and inexpensive.
Zagreb is full of squares, parks, historic buildings, monuments, museums and churches. Architectually, it is a beautiful city that wreaks of history. The old part of the city has a cathedral with two tall splindly spires that looks very similar to St. Stephan's Cathedral in Vienna. One of the more interesting places we ran into on a covered street corner had a distinct religious feel to it, with candles burning and people praying at a small prayer area - it turned out that it was a site that the Virgin Mary had been spotted. We actually met an Israely couple who are touring the world with the primary goal of visiting and documenting the sites where the Virgin Mary has been seen.
We found a wine shop that turned out to be the area's oldest wine cellar. The man running it was friendly and gave us a taste (more like two glasses) of some Malvacia produced on the Istra peninsula. Very nice, dry, good balance, with a hint of grapefruit. We ended up buying a bottle of it and a bottle of Palvec, a zinfandel clone, that we didn't get to taste. But he assured us that it was a good, full-bodied red.
The Dolac market is right in the center of town and is very colorful, with a myriad of bright red umbrellas, many varieties of fruits and cheeses and souvenier shops. One floor beneath the market contains all the meats, more cheeses and fish.
On of the more unusual places we visited was the Mirogoj Cemetary. It sort of reminded us of the Pere Lachaise Cemetary in Paris, where the likes of Chopin, Oscar Wilde, Edith Piaf, and Jim Morrison are burried. The entrance to the cemetary is quite grandeouse, looking more like a castle than anything else. The main mausoleum has some very ornate graves. Most of the headstones have the word Obitelj on it followed by the family name. It seemed that the word was related to "obituary". But we later found out that it is the word for "family".
This is our second time in Croatia and we have yet to make it to Dubrovnik and to Plitvice Lakes National Park, a Unesco World Heritage site. From the photos I've seen, it is full of waterfalls and turquoise lakes, many that are interconnected. I suppose we'll be saving this for the next time.
A couple of things we noticed in Zagreb is that graffiti artists have tagged every available wall in the city with the exception of some government buildings. It just seems to be an accepted form of expression. The other thing we've noticed (and not just in Croatia) is that half the people smoke. The evil tobacco companies have really done their marketing job extremely well here.
In the morning we got a tram to the train station and found our way to the train to our next stop - Budapest.
Posted by George at 10:47 PM No comments: 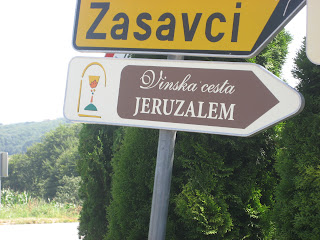 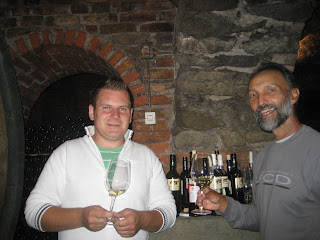 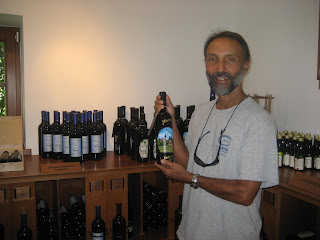 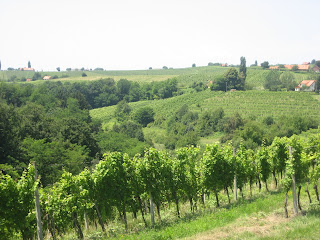 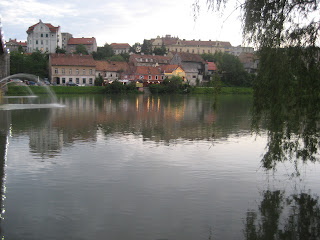 We took an early morning bus out of Bled to Ljubljana and then a train to Maribor, the eastern part of Slovenia. What's nice about Slovenia is that the distances are not that great, so most train and bus rides last only one or two hours. Maribor is on the Drava River. There's nothing much special about Maribor. We came here to taste some of the wines they make in this region.
After touring the city, we opted for renting a car because there were no available winery tours. It's pretty much a do-it-on-your-own sort of a thing. In the morning we got our car and headed off to a place called Jeruzalem - these people are very religious about their wines. We drove about an hour in a pretty flat area. Then the terrain turned into lush green hills, Jeruzalem lies about 200 meters above sea level and has about 20 wineries.
After talking to a woman at a local "vinotek" (and tasting some of the area's white wines),she suggested the Puklavec guest house/farm/winery. It didn't take us long to find it. Puklavec sits on a knoll and has a 360 degree view of the valley. With fruit trees and a view of rows of grape vines, it's quite the place. Blusch, the wine maker, makes Chardonay, Muskat Otonel, Sauvignon (Blanc), Rose Modri Pinot (a wonderful rose from Pinot grapes) and a wine that is only produced here called Sipon. Sipon got its name from the days of Napoleon. As the legend goes, the wine and its grape had no name until Napoleon had a taste. After drinking it he repeatedly said "Se Bon!". So the wine makers began to call the wine Sipon (pronounced shi-pon). Another wine Blusch make is ice wine, but only if it freezes.
In the evening we had a farm-like dinner served family style. It was simple but tasted delicious. Even Diane could not resist eating some of the home-made sausage. Needless to say, the meal was acompanied by plenty of wine. After dinner, Blusch took us to his cellar where I got to taste some barrel samples. One of the wines he was aging was a Chardonay. It had a nicel crispyness to it with a touch of carmel and honey. Very tasty. He told me that he and hiis family grow about 60,000 vines on 15 hectares. From that he makes and produces about 5000 cases of wine. He figures that each vine he has produces one bottle of wine.
The following day, we got up and had a hearty breakfast and drove back to Maribor, where we got on a train to Zagreb.
Posted by George at 9:27 AM No comments: 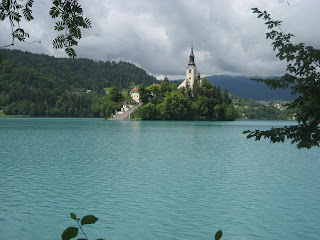 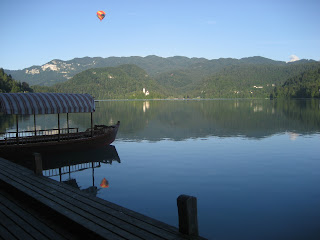 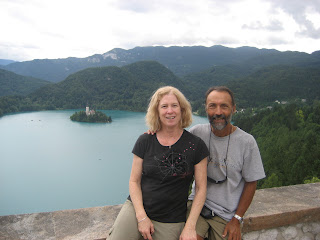 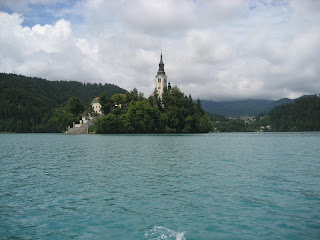 It was about a two hour bus ride to Bled. One can't resist getting the camera out at first sight of the turquoise-colored lake. In the middle of the lake there is a small island with a very picturesque church on it and on one side, there is a dramatic view of a castle on a sheer cliff with a church by the lake. It's really a fairy tale setting. After a little search, we found our hotel - the Mayor Pension.
When we got to Bled, fortunately the weather began to clear a bit. The jagged peaks of the Julian Alps (named after Julius Cesaer) became more visible. We spent one day hiking around the lake, renting a row boat and rowing out to the island church in the lake, and hiking up to the castle that dates back a thousand years. The next day we took a bus to Bohinj and its lake. We then hiked to Savica waterfall, a splendid sight (the name for waterfall here is "slap"). It's a dramatic sight because the water rushes out of the middle part of the sheer granite cliff falling several hundred feet. On the way back, I noticed some interesting sail boats that looked like miniture versions of 12 meter racing boats. There looked about two meters.
At night after dinner at a more upscale "gostilna", we stopped at a vinoteka where were able to taste Slovenian wines. We met the owner and some really nice Slovenian wine affecianados and ended up spending far more time there than we had anticipated. It didn't make it easier to get up the following day when we were taking the bus to the eastern part of Slovenia.
With its fairy tale setting, Bled appears to be a popular spot for weddings. During our short stay, there was one wedding at the island church and another one at the casle. I believe both involved Americans.
Some comments about Slovenia - we find it to be a very clean country, with not much litter (not even cigarette butts in spite of a number of smokers). We drink the tap water right out the tap everywhere. It tastes great. Public transportation is efficiently run, well organized and not expensive. Slovenian people are very friendly and helpful. Most speak reasonably good English (thank goodness, because their language doesn't come easy to us). We are lucky in that there are not that many tourists here. From what we've been told, that's partly due to the cold and cloudy weather and due to the economy around the world. Of the wines we have tasted the white wines fare better then the reds. The only reds we have liked are from the western region near the Italian border.
We have now arrived in the eastern part of Slovenia, known for its excellent white wines. We are staying in the city of Maribore, will rent a car and tour some of the wineries. Ciao.
Posted by George at 1:14 PM No comments: