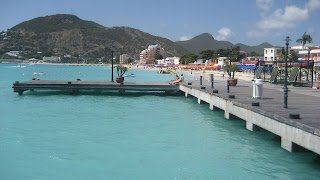 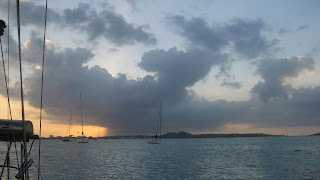 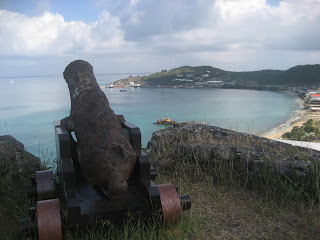 February 11 - St. Martin
I had confused the spelling of this island a number of times. The crux of the problem is that half of the island is Dutch (the southern end), while the northern end is French. The Dutch side is called Sint Maarten and the French side is St. Martin. The island was split many years ago in a peaceful manner. Dutch settlers liked the southern part because of the salt ponds, while French settlers grew tobacco and sugar cane in the north. Today, all they really have is tourism, yachting and duty-free shopping.
February 13 - St. Martin
We’re still in Marigot Bay. It’s a comfortable and low-keyed kind of a town, with lots of restaurants and shops. We took the “dollar bus” to Philipsburg (the Dutch side) and were not impressed. Very touristy along the beach and mainly attracts the tourists that come from the cruise ships.
Back in Margot, we hiked up to Fort Louis, which offers a beautiful panoramic view of the area. The fort has an interesting history. Built in the late 1700’s, it was once attacked by a British flotilla consisting of some 200 men. The French garrison only had about thirty men in total, but fought the Brits off, sending most of them scurrying back to their ships and imprisoning others. Interestingly, the Dutch also came to the fort’s rescue and had snuck around the fort to catch some of the other British troops.
Enough history - in the afternoon, Dave and I went by dinghy to the airport to pick up Kristi. Rob stayed behind because he wasn’t feeling well. To get to the airport by dinghy, we needed to go under one of two bridges that lead into Simpson Bay. Luckily, we found a bar that was located right across from the airport with a dinghy dock.
At the airport, Kristi’s flight already had landed by the time we got there. As we waited, all the passengers came out except Kristi. Apparently something had gone wrong.
We headed back to the Lahaina Roads. As we passed under the bridge leading to Margot, we noticed big swells coming in. Then we saw a large tender being hit by a breaking wave. It was a bit unnerving to see huge swells (some breaking) in the harbor.
When we got to the boat, it was rolling violently from side to side. The anchor chain was being jerked hard with each passing swell. It was going to be a rough night. We decided to move in a little closer to the marina where there was more protection from the swells. We checked to see if there was an available slip in the marina, but they never got back to us. I’m sure they were full.
Needless to say, it was a rough night. None of us got much sleep with all the violent rolling the boat did all night. This morning, things are a little more settled. We’re again attempting a run to the airport. Hopefully, Kristi will turn up this time.
Posted by George at 7:09 AM No comments: 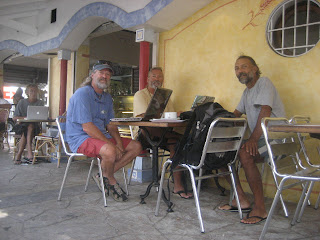 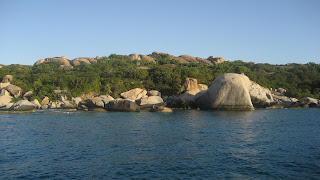 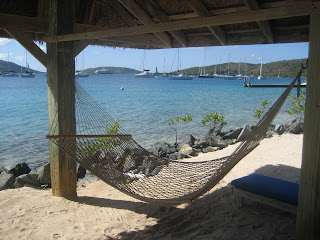 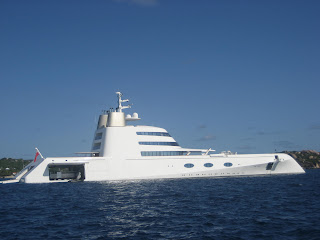 February 6-8 - The Bitter End
The Bitter End is on the north side of Virgin Gorda. Apparently, Columbus thought the island resembled a plump woman lying down and saw fit to call the island Virgin Gorda. The spot we were anchor at was beautiful and reminded me somewhat of the South Pacific. Surrounded by hilly islands, palm lined beaches and reefs it looked idyllic. The water was crystal blue.
The hotels have done a good job developing their resorts without overwhelming the surroundings and the environment. The buildings fit in neatly and the bars and restaurants neatly adjoin the white, sandy beach. From one end to another is a brick promenade. It’s a bit touristy and attracts many charter boats, but it’s nicely developed.
We snorkeled at one of the reefs and saw a colorful variety of soft and hard corals, turtles, long, spiny sea urchins, tiny crabs, eels and lots of fish. Apparently, there were some canons in the area too. But we missed them.
In between two islands lies a sandy cay named Saba Island. It’s really tiny consisting only of a large waterfront restaurant/bar and a small resort. We hung out at the bar for happy hour one evening because they had a good wi-fi connection. Later in the evening, after dinner, Dave and Rob went in to watch the Superbowl game on a large outdoor screen at one of the other pubs.
The following day we motor sailed back to Spanish Town to formally check out of the BVI and prepare for our night crossing to Anguilla and St. Martin. After dealing with immigration and stocking up on some provisions, we anchored out to the island of Fallen Jerusalem (I don’t have a clue where the name came from). Like the area of the Baths, the anchorage had huge granite boulders along the shoreline.
On the way to the anchorage we passed by a huge, 200 foot, ultra-modern yacht. It looked more like a space ship than a yacht that had just landed on the water. When nightfall came, the yacht had lights all along the hull that brightly lit its surroundings. Definitely ostentatious.
After dinner we headed for Anguilla.
February 9-10 - Overnight Crossing to Anguilla
Often times, from what we read, the crossing from BVI to Anguilla is not an easy one. The chances of big seas and high winds are high. We got lucky. The crossing was an uneventful thirteen hour motoring journey, under a beautiful starry sky.
For Rob it was exciting because he had never made an overnight crossing. We did our standard shift routine of one hour on, two hours off, which seems to work well for us. 'We encountered some shipping traffic during the night and in the morning light saw the outlines of Anguilla, a low profile island with no mountains. A couple of hours later we anchored in Road Bay.
After preparing to go to shore, though, we had a change in plan. The harbor looked pretty dismal - same old bars and restaurants lining the shore. Dave suggested just pulling up anchor and heading out to St. Martin, just five miles to the south of Anguilla. Otherwise, we'd have to go through all the formalities of customs, immigration, fees, etc just for a one night stay.
An hour later we were anchored in Margot Bay, on the French side of St. Martin. And now, in the morning, we're sitting at a French café, having a café American with a baguette with butter and jam…and internet. Ah, the good life.
Posted by George at 5:44 AM 1 comment: