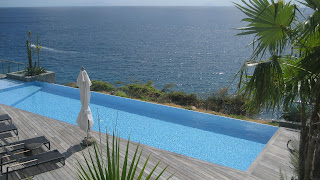 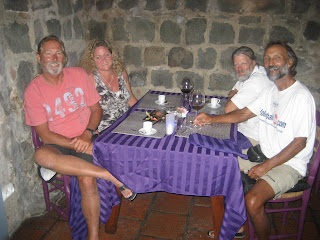 February 18-20 - Saba to St. Barts
At first it started out like it was going to be a good sail from Saba to St. Barts. We hoisted all of Lahaina Roads’ sails, including the mizzen and were doing over five knots in the right direction. Well that soon changed. The wind dropped and pretty soon we were not making much headway - about two knots. We started the engine.
We got into Gustavia Harbor in St. Barts early in the afternoon. We anchored amongst a number of boats in the outside harbor. The big boys (the super yachts) were visible inside the harbor and we knew there were moorings in there too, but the likelihood of finding an available one, was remote.
We took the dinghy in to register at the port captain’s office and to check out the town. It’s a very charming U-shaped harbor with tidy buildings surrounding it. You can instantly see what the old salts liked about this harbor - a beautiful anchorage that’s relatively safe. As is typical around these islands, the Spanish, French and Brits all fought over this place. Also, the Swedes got involved when the French gave it to them in exchange for free port rights elsewhere. But then many years later they in turn sold it back to the French - which is what it is today.
On Friday, we took a hike up to Fort Gustav. We headed up a windy and narrow road that runs from town up a small hill. Lots of cactus and other dry-climate vegetation, including a very huge and gnarly looking tree. At the top, there wasn’t much of a fort. A couple of fake canons and a functional lighthouse. But the view was panoramic. In the distance, you could see from St. Martin all the way south to St. Kitts, with a number of islands in between.
On the way back, we went through town and walked up towards what we thought was another fort. It turned out to be a working garrison, not open to visitors. We continued onward walking down the street and saw some of the spectacular villas with infinity pools and views that were spectacular. No other adjective would do these views justice. Looking out from the pool was an azure blue sea with nearby rocks, islands and reefs. What a view.
During our walk, we ran into a British couple (Dick and Mary) who also were cruising the Caribbean. We later met up with them at Le Select, a local hangout known by the cruisers as one of the more affordable bars in town.
When we got there, next to us, was a gregarious group of Americans, who we struck up a conversation with. After a brief chat, we found a number of coincidences in our lives. Like Dave, Larry was a private pilot. The other couple they were with were Whitby 42 owners and were cruising the Caribbean (Dave‘s boat is a Whitby 42). Larry’s niece had been in the Peace Corp in Nicaragua (Kristi‘s son was in the Peace Corp in Honduras). Larry‘s son works in San Francisco as a wine importer (do I need to say that I like wine?) and lives in the East Bay in the Oakland/Berkeley area (very near to where Meredith lives). And the best part - we found out that Jimmy Buffet owns a home here, keeps a boat in the harbor and when in town, often ends up performing informal sessions at a local bar (I don’t think Dave meets the criteria of a parrot head, but he does own most of Jimmy’s albums).
I think that one of the best parts of traveling is meeting people. It’s so refreshing to find people our age leading such full and exciting lives. For example, the one couple lives in St. Barts part of the year, the other part they divide between Philadelphia and New Jersey (Hhmmm….must be grand kids in those other places - I’d live here a majority of the time). Dick and Mary divide their time between England and the Caribbean. Tough life.
That evening the four of us went out to dinner (which we don’t often do) to a French restaurant. We had been told by Larry (who lives here), that it was one of the best and most reasonably priced restaurants. “B4” turned out to be a great find.
On the dinghy ride back to Lahaina Roads, we scooted past one of the super yachts and peeked into a series of elongated portholes - inside was a large weight training room with all sorts of equipment. Although a bit on the conspicuous consumption edge, it would be nice to have a workout room during the cruise.
Incidentally, if you’ve been following the blog, you saw a photo I posted of a wild looking Captain Nemo super yacht that we saw at the Baths in Virgin Gorda. It turned up here. I researched it on the internet and found that the Hamilton belongs to a Russian billionaire who reportedly maintains a fifty man private security cadre on board to ensure his safety. Its earlier sightings were in the Mediterranean. Apparently, it gets around.
And speaking of posh, Dick, told an interesting thing about the word’s origin. It actually is an acronym meaning portside out/startboard side home. When the wealthy traveled by steamer from England to the USA, they preferred their cabins to be on the sunny side of the ship. Hence, they requested cabins on the portside going west and on starboard going home.
Today we're heading to a small anchorage on the north side of St. Barts. After that it's back to St. Martin to drop off Kristi and Rob. After that Dave and I are off to Antigua.
Posted by George at 7:44 AM 1 comment: 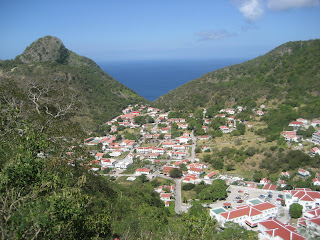 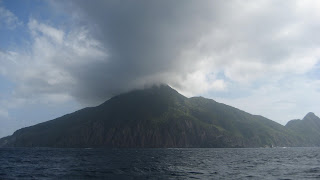 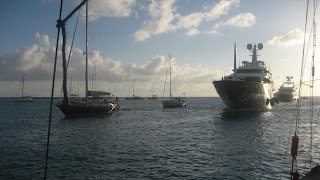 February 14-17 - Kristi Actually Arrives
The airport scenario was strange. The video monitors stated that flights were on time and announced that flights had landed, when in truth, the flights never even had left their points of origin. In Kristi’s case, on our third adventure trip to the airport, the monitors stated that her flight was on time. Soon afterwards, the monitors announced her flight had landed. In fact, her flight was still in the air and did not land for another half hour. But her flight did indeed land and Kristi did, in fact, arrive.
As soon as we got to the boat, we decided to get out of Margot harbor and sail to Grand Case, a quaint beach town with shops, French restaurants and bars along the beach. We ended up anchoring near Lisa and Renz’s catamaran, a couple we had met earlier in Margot. That evening, we had cocktails on their boat and afterwards went out to dinner at one of the beach-front restaurants (not to be confused with the fine French restaurants that were there but were a bit too spendy). The cruising life can be so grueling, at times.
The next day, we sailed to the Dutch part of St. Martin to spend the night in Simpson Bay. The plan was to position ourselves for a sail to Saba Island the following day.
To get into Simpson Bay, you need to go through a bridge that opens at particular times. We planned our arrival and queued up. At 5pm they had the outbound vessels exit. At 5:30pm, as an inbound vessel, it was our turn.
At first, some boats that had appeared to be at anchor, were now starting to move towards the bridge. It was like a race - all the boats started to head for the gate - large and small. We lined up with some of the super yachts, who ended up right behind us.
The bridge is not a huge one - allowing for a maximum width of about a 56 feet. We went through just fine and at the other end were greeted by revelers at a bar that happened to be positioned well to see the boats traverse the small channel.
The following day, we listened to the weather - SE winds of 15 knots, with gusts up to 20 knots. Not a bad forecast. Again we went through the bridge. When we got out of the harbor, the winds were a little bit stronger than had been forecast, but not bad. We reefed the main and unfurled a little bit of the headsail. Soon we were cruising at about 5.5 knots, on a beam reach and had Saba in our sights.
It’s interesting to sail around here. Once out, you can see a number of other islands 30 or 40 miles away that are other countries. Right now we’re sailing to Saba Island. In a few more days we’ll sail to St Barth’s, Nevis and Antigua. All, relatively short distances.
As we approached Saba, it looked like a foreboding island - a big rock jutting out of the ocean with side wings that dropped straight into the sea. We found an available mooring, tied up and relaxed for the evening.
In the morning we dinghied over to the small harbor and found a taxi to give us a tour of the island. Billy, the taxi driver, was a local, born in Saba. He was a bit of an oddball, but in a nice way. He took us to the towns of Bottom (the capital), Windward and St. John’s and showed us a bird’s eye view of the small airfield.
Saba’s history goes back to you know who - Christopher Columbus! He discovered it on his second trip to the new world and didn't think to much of it. The Spaniards claimed it anyway. But eventually a group of British sailors claimed it for England, after they were shipwrecked in Saba. Then later the French claimed it in 1635. Shortly afterwards, Holland sent people over from the neighboring island of St. Eustatius to take up residence in Saba. Finally, in 1816, Holland formally took control of Saba and it has since remained a part of the Dutch Antilles.
Historically, Saba was a seafaring island with various nationalities. Today, Saba still has a variety of people who make it their home, including Brits, Scots, Dutch and blacks. It’s a neat and tidy place. We found out from Billy that you can paint your house any color as long as it is white with green trim. All houses must have red roofs. Saba has a medical school and the tourist trade going for it. It has a rain forest, beautiful hiking paths, diving and eco lodges with beautiful ocean views.
We had lunch at Scout’s Restaurant. We had a table that was on in a room at the edge of a cliff with a spectacular view. It was a bonus that the food happened to be tasty too. Of course with that view, anything may have tasted good.
After we got back to the boat, we went snorkeling. We enjoyed it, but the waters were deep - more suitable to diving. But I still got to see a turtle and some nice coral formations. We truly enjoyed our day-long excursion of Saba.
Tomorrow we off to St. Bart’s.
Posted by George at 6:08 PM No comments: