St. Barts to St. Martin and on to Antigua 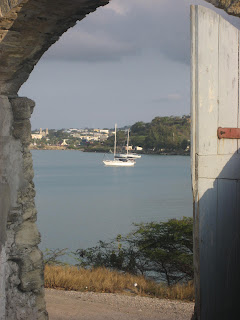 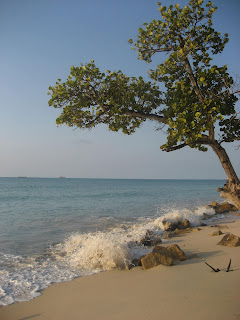 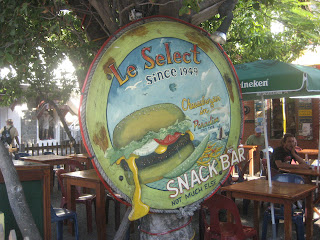 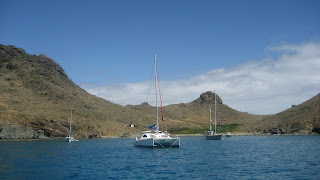 February 21-22 - St. Barts to St. Martin
The following day we didn’t leave St. Barts until 3pm, mostly because of errands we still wanted to do but also because we had opted to stop at Le Select bar. We ended up spending more time there, talking to more cruisers and meeting other tourists.
It only took a half hour to motor to Anse de Colombier, a small beach on the north side of St. Barts. Although there were supposed to be some good hikes around the area, we never got off the boat and in the morning left for St. Martin with one stop-over along the way.
Ile Fourchue was a small, barren-looking island, a few miles north of St. Barts, right on the path to St. Martin. It made a great stop. A mooring was available, so there was no need to bring out the anchor. The snorkeling was excellent. We saw a variety of fish and coral, including a shark, barracuda, what looked to us as a dying, but good-sized, lobster and lots of colorful reef fish.
After our snorkeling we continued onwards to St. Martin. This time we headed for Oyster Pond, a small, peaceful, protected lagoon on the southeastern side of the island. The lagoon is surrounded by large hotels and private homes. One side of it is Dutch, while the other side is French. We splurged by getting a slip at the Captain Oliver’s Marina. We were here, as a way to get Kristi and Rob to the airport Tuesday morning.
February 22-23
Kristi rented a car after we got docked. We decided to circumnavigate St. Martin by car. We weren’t too impressive with the infrastructure and the housing that we saw. A lot of it was run down. The big fancy villas were behind gates. Certainly there were the moments of beautiful panoramas. But otherwise, the island is made up of the more ramshackle buildings in various states of disrepair, poor roads with huge holes and in some areas, dangerously open sewers along the shoulders. What I did not see, were all the iron bars on houses that were so typical in Puerto Rico. These people must steal less - was my conclusion.
During our circumnavigation of the island we got errands and shopping done too. It was the last evening for Kristi and Rob, so we decided to eat out at The Dinghy Dock Restaurant and Bar. Their happy hour is unique - they hand you the bottle of liquor and you pour your own drink. We each needed only one drink. Dinner was exceptional, particularly for a bar-type restaurant. The seared tuna steak that three of us had was the best.
I had an interesting conversation with a Dutch couple later on who went on to tell me that they had sailed a lot when they lived in New Zealand. The funny thing was that they mentioned that one of the sailing ethos they have in Holland is (and he said this in Dutch) - “The time to reef is when you first think about it.” Interestingly enough, that’s been our motto all along and one I‘ve lived by for most of my sailing years. I suppose from that conversation one might conclude that sailing theories are pretty universal.
The next day, we all got up very early and took Kristi and Rob to the airport. It’s always hard and yet emotionally awkward to see friends off at an airport. In a way it’s seems so superficial. But the flights looked like they were on time, so they each checked in and Dave and I returned to Lahaina Roads. Soon were underway to St. Barts in heavy seas and twenty plus knot winds.
On our crossing to St. Barts (as a stop-over to Antigua), Dave and I saw some whales breaching and making a big fuss! They were a quarter of a mile to starboard, so it didn’t make sense to take pictures of the event, but it was pretty special to see those giant mammals come to the surface, perform and then dive.
When we got to Anse de Colombier, we found out that each day we cruise, we continue to learn. Today’s lesson was - tie the solar showers down on deck before leaving port. We had lost our large eight gallon solar shower overboard. Darn!
February 24 - On to Antigua
We left Anse de Colombier on a blustery late afternoon day. The wind was gusting and the swells were steeper than normal. We’d had a rough night, not particularly restful. The boat had continuously rolled back and forth.
As we got out, the good news was that the wind was southwesterly. With Antigua lying southeast, it made for a decent sail. We continued on our course for about two hours and then the wind started to clock around and eventually became light. We started the engine and motored for most of the rest of the crossing. We even got rained on
We entered St. John's right along two large cruise ships that were coming in at the same time. We found one of the three spots to anchor in the harbor and got settled. Darren Kraker, a friend of mine from San Luis Obispo and Cal Poly, will be joining us here for a week.
Posted by George at 7:44 AM No comments: