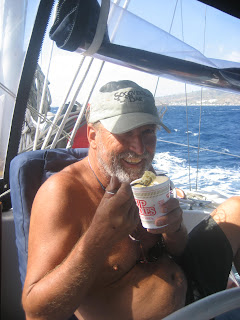 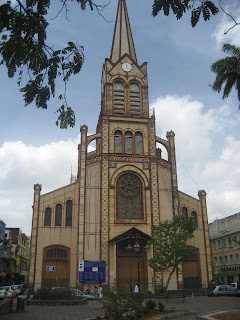 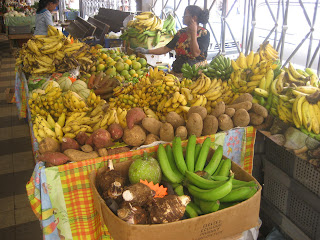 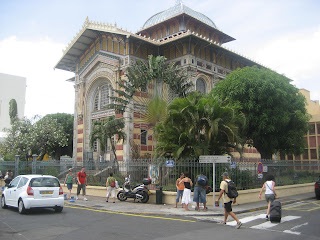 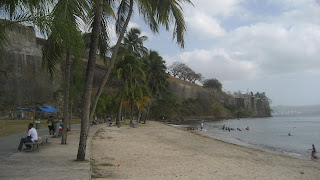 March 16-17 - Roseau to St. Pierre and an Abrupt Departure to Port-de-France
I’m certain that in our visit, we slighted Dominica. It would have been great to rent a car and see more of the interior, where the rain forest are and to see Dominica’s eastern coast, which we missed totally. Next time.
I do think that even with the short time we spent there, we changed our earlier view of a “dangerous” place. The people we met were all very friendly and pleasant folks. We never felt in any sort of danger and heard nothing to the contrary from other cruisers.
We left Roseau early in the morning for St. Pierre, Martinique. Wind and sea conditions were zilch We didn’t have a long way to go - about 38 miles. Slowly, the wind starting picking up from the south east. After a couple of hours it clocked around to come from the south, just where we were going. Within a half an hour of that it was blowing 20 knots with gust to 29 knots and seas to match it. Uncanny! The wind knows just where we want to go.
Along the bouncy way we had lunch. Styrofoam cup-of-soups continue to fulfill the needs of a hungry sailor with their savory bites of peas, carrots, corn and high salt content. They’re easy to warm up in rough seas and the noodles provide that warm, filling sensation in the stomach. We ate it to the last kernel of corn. Hhmmmm….
We finally got into St. Pierre and found a spot to anchor among the other yachts on the south side of town. We decided against going into town to check in. We’d do that in the morning.
At 6a.m. sharp we were awakened by male voices and knocking against the hull of the boat. Local fishermen were telling us in French that they wanted us to move because they were going to be casting fishing nets in our area. Crap!!!
Sleepy-eyed and all, we got the anchor up and moved to the opposite side of the anchorage and dropped the anchor. No sooner had we gotten everything in place when other fishermen approached us and said that we’d have to move - they were going to be putting out their nets here. #&$%@&!~@!!!!!
That was the last straw. We pulled up anchor and as much as we wanted to see St. Pierre, we headed south to the capital of Martinique, Fort-de-France.
St. Pierre has an interesting history in that it was a place that the Spanish, in the mid- 1600’s killed off the last of the Carib Indians. In the slaughter, the Indians cursed the French in revenge. Mt. Pelee would retaliate.
It took a few years, but indeed, in 1902 the volcano erupted with little warning and killed most of its 30,000 residents. And we still could see much of the lava flow that had gone down the hill. Incredible.
After so rudely having been awakened by the fishermen, we went southward another thirteen miles to Fort-de-France. We were anchored snugly in front of Fort St. Louis in a couple of hours.
Fort-de-France reminded me a bit of the New Orleans French Quarters. Among the sights we saw were the fresh produce market, the fish market, the St. Louis Cathedral, Fort St. Louis and the Schoelcher Library. The cathedral is not anything like the ones I've seen in Paris - much more utilitarian, making use of exposed iron in its architecture. The library, a very unique looking building, is dedicated to Victor Schoelcher. Apparently, Schoelcher fought hard against slavery (unlike Napoleon’s wife, Josephine, who was a supporter of slavery and influenced Napoleon himself on his views on slavery). Her statue in the city park was beheaded a few years ago. Coincidence? Maybe not.
Next, we plan on sailing across the bay to a place called Troi Islets. Perhaps today, perhaps tomorrow. Afterall, we ARE retired.
Posted by George at 10:45 AM 1 comment: 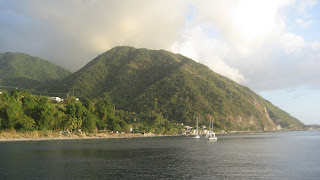 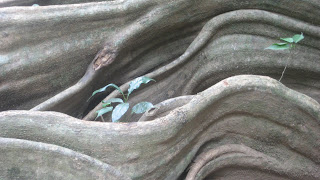 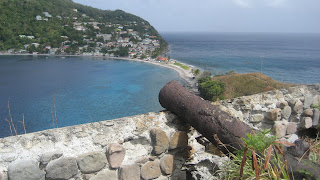 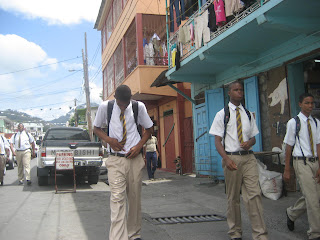 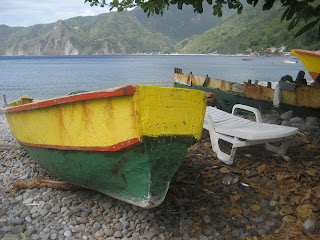 March 13- 14 - Portsmouth, Dominica and onward to Roseau
We signed up with Martin for an Indian River tour. The following day he was there to pick us up on time and off we went. As we got to the river, he switched from using the outboard motor to oars (mandatory since it is a national park). He told us a bit of history, about the life of the Caribs along the river, how Columbus and his men went up this very river to meet with the Carib Indian chief and also to fetch water for his ships.
As we progressed up the river it turned into the quintessential jungle riverboat adventure (sans Humphrey Bogart and the African Queen) . But this was the real thing. It was a bit swampy, with large crabs on the sides of the river, bloodwood trees with their curved and spooky roots along the river bank, vines hanging into the river and the sounds of numerous birds. Reassuringly, Martin stated that no harmful animals exist in Dominica. No poisonous snakes, spiders, malaria, crocs and so on.
At the upper end of the river trip there was a small primitive restaurant. I went in to the river for a dip in the cool water. It was refreshing and quiet, to just lie in the water and listen to the birds chirping. It was an adventure in spite of not being a unique one, since both Dave and I had been on jungle river trips. (Dave’s trips had been more exciting. They occurred back during the Vietnam war (or what the Vietnamese today refer to as the American war) when there were people shooting at him.)
In the evening, we took a long walk looking for a Creole restaurant. There were none to be found that were open, even though it was early Saturday night. We ended up at a tiny restaurant called “Nora’s”. Nora stood outside barbecuing chicken legs and thighs. They smelled delicious. The chicken was THE dinner (and a beer). Nothing else was served. It was a sparse yet tasty meal.
That night was a terribly rolly night for us. Winds were out of the south and the swells came from the west. The boat rolled furiously from one side to the other most of the night. With little sleep and bleary eyed, as soon as we got up, we prepared for our departure to Roseau.
Soon, we were underway to the capital of Dominica in the southwestern part of the island. Not much more than an hour had passed, while motoring into hefty seas and winds that were blowing from the south, when we noticed the engine suddenly getting hotter. Dave went down below to check on the engine, while I shut it down and got a sail up. The fun started.
It turns out that the fan belt which turns the water pump got shredded. Being that this is a boat and nothing is ever easy, to change the belt Dave needed to undo the coolant hose, draining a lot of the coolant into the bilge. Anyway, it all got taken care of and soon we were back pounding into the wind and seas.
We got into Roseau early in the afternoon and were approached by one of the boat boys. Already we knew to ask for Pancho. The boat boy directed us to one of Pancho’s moorings and helped get us set up. We were moored in 45 meters of water - happy not to have had to anchor at this depth.
Pancho, a pretty hip looking rasta fellow, came by the following morning to check if we wanted to do any tours (that’s where they make their money). The typical greeting here is to ask if “everything’s alright”, and he did just that. We agreed to a morning snorkeling trip to a marine reserve called Champagne Beach, which we had heard some good things about.
One of his boys came by soon afterwards and picked us up. It turned out to be a unique snorkeling trip. The area, known for its bubbly water from underground lava vents, emits small fizzy bubbles. There also was lots of varieties of coral (some looking like small volcanoes craters) and various fish and eel. I was on the lookout for seahorses, but didn’t have any luck finding them.
In the afternoon we walked into the town of Roseau. A busy place with a typical third world feel. Lots of small grocery and apparel stores, cafes, bars and a few restaurants. Illegal copies of DVD’s and CD’s were on practically every corner.
Next we got on a bus (a van) and went to the most southern part of Dominica. Scott’s Head is a marine reserve and has a small fishing village alongside. The bay consists of an extinct volcano crater. We didn’t bring our snorkeling gear, which was unfortunate because it looked like a great spot with a wall-like structure.
On the way back, the bus (again a van), happened to stop along the beach by some fishermen. Some of them had just returned from a successful day of fishing. The driver and we negotiated for fish. We ended up with a small but nice looking tuna.
And so ends another day in the life of cruisers. Assuming no major weather change, we are planning for a crossing to Martinique tomorrow.
Posted by George at 3:17 PM 1 comment: