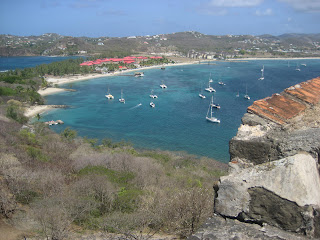 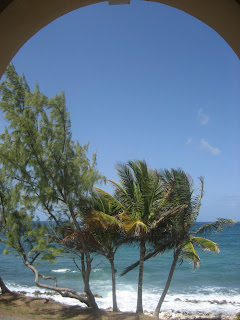 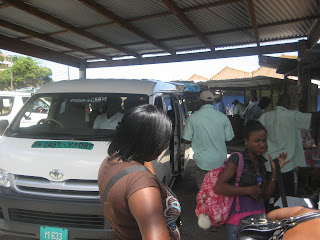 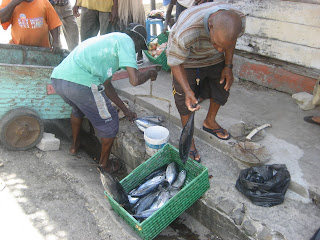 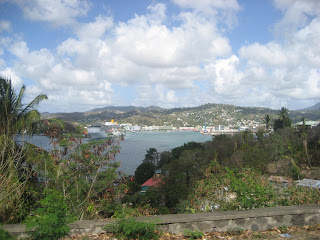 March 23 - Onward to St. Lucia
We were underway out of St. Anne’s harbor by 9 a.m. St. Lucia was a little over twenty miles south. We put a double-reef in the main and unfurled the headsail only a tad. The winds were out of the east (nice direction for a beam reach) and were steady at twenty six knots. As we got into open waters the seas were 7-9 feet with an occasional higher one.
We soon decided that we didn’t even need the reefed main. A working jib was plenty to make 5-6 knots. Otherwise, it was a pretty comfortable sail being that the weather was all abeam. Had we needed to go straight into the wind and seas, it would have been a different matter. But as it was, four hours later we were anchored in Rodney Bay, St. Lucia
March 24-25 - Rodney Bay to Castries
On the northern end of Rodney Bay is Pigeon Island and the remains of an old fort. Inside the bay there is an inner harbor with a marina, shops and restaurants (with wi-fi). The area is non-descript, with a typical sort of marina look. The bay is wide with white sandy beaches and numerous resorts and hotels.
One afternoon we took the dinghy to Pigeon Island (really more of a point) to where the fort is located. It had a small museum with historical displays of battles that had taken place between the Brits and the French off the coast of St. Lucia. Apparently, the island changed hands eighteen times between them. Interestingly, it was not even they that discovered St. Lucia - it was the Spanish!
Originally, the island was settled by the Arawak Indians. But after 800 years of peaceful farming and fishing, the warring Carib Indians came in and wiped them out (actually, they executed the men and kept the women). Yeas later, the Europeans proceeded to wipe out the Caribs. It makes one reflect on land ownership - I suppose that the biggest guns end up as the owners. Aside from the “minor” issue of whether it is just, it makes sense even today. Take for example, Tibet.
Enough history and grand-standing. Today, St. Lucia is an independent nation but remains part of the British Commonwealth.
March 26 - An Exciting Bus Ride to Vieux Fort
We left Rodney Bay in the late morning and motored four miles south to Castries. As we entered the harbor we saw three large cruise ships docked and one anchored outside. Apparently, Castries is a little bigger than Rodney Bay.
The following morning we headed to the Castries bus station. Many of the buses are fifteen-passenger Toyota vans. They don’t run on a schedule. Instead, when the bus fills up, the driver takes off. Our destination was Vieux Fort, in the south of the island. The route the bus took was to go east across the island along the rain forest, then drive southward along the coast. Our main objective was to see the east side of the island, since we were only sailing on the western coast.
The bus driver appeared to be in a hurry, passing up slower vehicles on the windy and narrow mountain roads. It would have been nice to have blinders. Up in the mountains it was cooler and the terrain looked typical of a dense rain forest. The edges of towns we passed had banana farms and lots of mango and breadfruit trees. They also have an unusual looking fruit called a calabash, a perfectly round, green gourd-like fruit. I’m really not sure if the fruit is even eaten. I do know that they make bowls out of its hardened shell.
Vieux Fort was just another ram-shackle, dusty looking town. We did find an excellent little restaurant that we happened upon on our walking tour. We had a fresh salad, vegetables, pasta and roasted chicken with a Piton (the island’s beer), all for less than six dollars each.
While at lunch, I made an observation - here we were, a long ways away from home in a very different environment. Yet some cultural similarities were glaring. There were a few people standing in line, one was a local businessman in very typical business attire (a dressed shirt and pants, dark tie and a Blackberry strapped to his belt. Behind him was a young woman in tight jeans totally immersed in a conversation on her cell phone. But finally, someone stood out that looked culturally different- some real Caribbean color. He was a Rafta-looking brother, bright colorful shirt and pants, sandals, with hair piled under one of those hot, woven caps.
To complete the scene, a few steps outside of the restaurant at a very shabby corner store, some local fishermen were on the sidewalk selling freshly caught tunas (no ice in sight). A few feet away, a posted sign read “No peddling of fish”. I was reassured that we were in the Caribbean!
The ride back to Castries was as exciting as on the way over. The driver had two speeds - full bore and stopped. It must have been sheer luck, but we made it back safely. On our walk from the bus station to the boat, we stopped at the local fruit and vegetable market and bought our produce. We felt like locals.
One last observation. Where in Martinique we noticed very little obesity, particularly in Fort-de-France, St. Lucia seems be more like other Caribbean islands, in that a number of the locals have significant weight issues. This area is ripe for an in-depth nutritional research study.
Posted by George at 7:59 AM 1 comment: 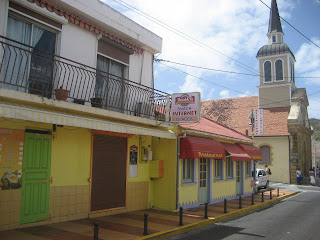 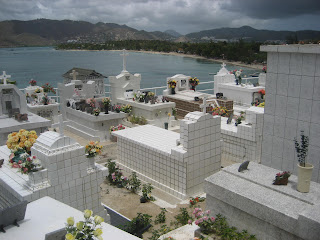 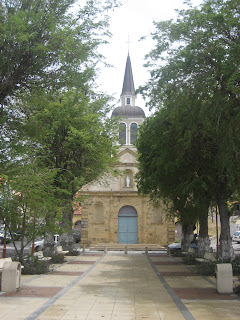 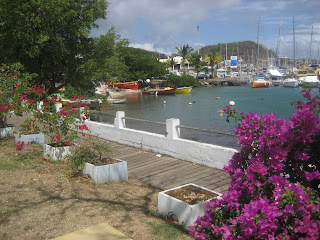 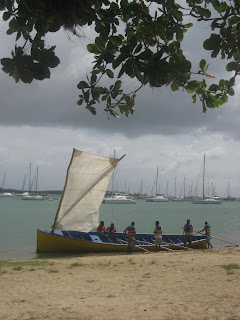 March 22 - Sainte Anne - Lots of rain and lots of wind
Squall after squall came by during the night. In the morning, we were in no mood to make the crossing to St. Lucia. Instead, we opted to take the dinghy in to Marin. (For those of you who live in Marin, CA, here the pronunciation of it is like this “mehrung”.
Dave really enjoyed the “marine store” ambiance of Marin and bought a few things to make for a nice afternoon’s project - a spendy new two-speed winch to control the headsail roller furling. Indeed, it will make life easier and safer when dealing with the headsail. The rest of Marin was ho-hum. Sainte Anne’s was a much prettier and cozier place.
March 23 - Onward to St. Lucia
We were underway out of St. Anne’s harbor by 9 a.m. St. Lucia was only about twenty miles south. We had a double reefed main and unfurled the headsail only to a working jib. The winds were out of the east (nice direction for a beam reach) and were steady at twenty six knots. As we got into open waters the seas were 7-9 feet.
We soon decided that we didn’t even need the reefed main. A working jib was plenty to make 5-6 knots. Otherwise, it was a pretty comfortable sail being that the weather was all on the beam. Had we had to go straight into the wind and seas, it would not have been pretty. But as it was, we were anchored in Rodney Bay, St. Lucia four hours later.
Posted by George at 8:03 AM No comments: 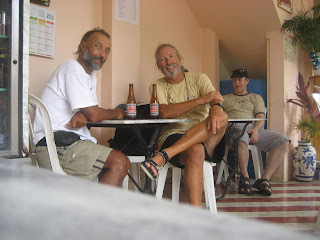 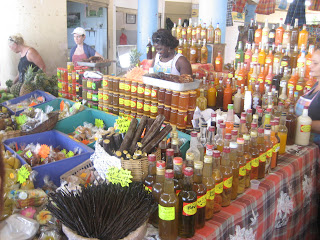 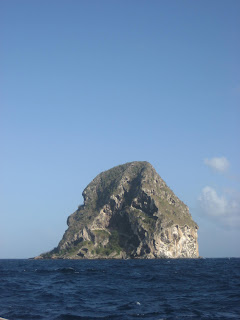 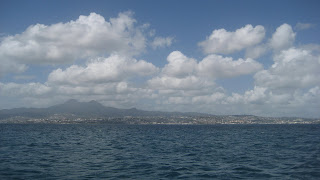 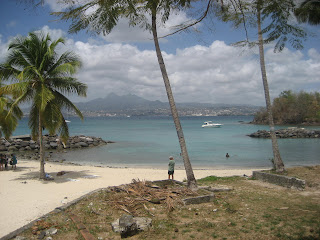 March 18-21 - Trois Ilets and On Southward
Across the bay (“anse” in French) from Fort-de-France are several good anchorages. Early afternoon, after having had lunch. we got inspired to make a move. There was no need for our normal preparation because Trois Ilets was only a hop-and-a-skip away. We were soon on our way.
We anchored in six meters depth behind one of the small three islands (hence the name Trois Ilets) that lie off the small village. As soon as we got settled, the wind started picking up to twenty plus knots. We considered taking the dinghy to shore but decided against it - it would be a wet ride in.
The wind pretty much blew hard all through the night. In the morning, in spite of the wind, we went to shore. Trois Ilets is a quaint and peaceful village. Many of the buildings have red, fish-scale tile roofs giving them a rustic and gingerbread cottage appearance. Very handsome. We walked passed an elementary school and as we did, I took a couple of photos of the kids playing. One of the women watching over the kids came out and started yelling at me in French for five minutes even when I was giving her my best puzzled look and spoke only English back at her. I was considering showing her that I would erase the two photos I had taken, but she was in such a tizzy that I just ended up walking away. But I learned my lesson - no more photos of kids on playgrounds.
The following day we motored a mile or two further and plunked our anchor down in Anse Mitan. Most of the area is on a peninsula, with a touristy village on one end and a marina with shops and restaurants on the other. At the tip of the peninsula, with spectacular beaches and views of Fort-de-France there is a large boarded-up hotel. Really strange that a place like that would have gone out of business.
We got back to the boat by 1 o’clock and again had the urge to move on - this place wasn’t doing it for us. We decided to try and make it to Marin, which is in the far south of the island, about fifteen miles away. With the strong easterly winds, it would be a snap.
At least that’s what we thought. We had a nice broad reach sail for a short while but it soon turned into a 25 knot southern wind. We dropped the sails and motored. The seas picked up and with the strong winds, it was slow going. We passed by some interesting bays and beaches and went in between Diamond Rock, a historic rock just of the coast.
Apparently, Admiral Nelson, back in the early 1800’s commissioned Diamond Rock as a British ship. Incredibly, he had his men climb to the top of this rock and haul up canons and supplies so they could shoot at French ships moving around the island. Needless to say, that didn’t please Napoleon too much. He sent ships to take care of the problem. But the British hung in there raising a raucous for eighteen months. When we sailed passed the rock, I couldn’t even imagine climbing it, much less hauling canons straight up.
We got into the Marin area a little too late to navigate into the harbor, so instead, we opted to pull in to the nearby village of Sainte Anne’s. In the morning we took the dinghy ashore to St. Annes. From the moment we stepped ashore, it had a comfortable feel to it - not so touristy, a working village, but still cute. It had a tree-lined central square (actually a rectangle) with a church on one end and stores and restaurants on each side. On the east side of town, overlooking the harbor, there was a beautiful, mostly white, cemetery. Back at the town square, we were quite surprised when we found out we could get free wi-fi sitting on one of the benches in the square.
While we walked around, a sudden rain surprised us. Luckily, it was after noon - we stopped at a nearby café and had a beer. It was only a one-beer shower. We returned to Lahaina Roads and had our lunch.
Posted by George at 3:27 PM 1 comment: