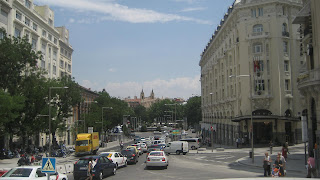 Driving in to Madrid was wild. It certainly is the big city. A place of five million people (the city and its periphery), we immediately got into horrible traffic. Yet slowly but surely we managed to find our way to my cousin Gys’ home.

We knocked on the door of their pink villa and were greeted by Gys and the kids (Paloma was still at work). We had a fun reunion and settled in. Later on after Paloma got home from work, she cooked up a wonderful paella.

In the morning, Diane and I took the bus into Madrid (the subway metro was having a wildcat strike, so traffic was horrific and the bus was jam-packed with people). Driving the car in to Madrid would have been nuts. 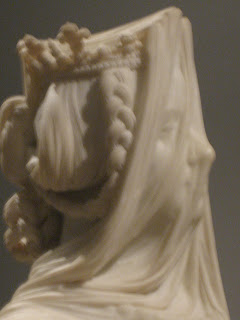 Once in Madrid, we toured the Prado Museum, a huge world-class museum with art from medieval times (lots of scenes of the crucifixion) to paintings from the present. Naturally, the museum’s focus is on Spanish painters, including Spain’s best known painters Velasquez, El Greco and Goya. It took us the better part of the day to tour the museum.

The strangest thing happened to us when we were on our way back home. We were waiting for our bus, when another bus stopped and out walked a former colleague of mine from Cal Poly. He was in Madrid with his two sons to celebrate his grandfather’s 90’s birthday. In a city of millions, we wondered what the odds were of meeting someone from tiny SLO! 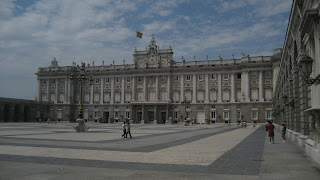 The next day we took the bus back in to Madrid to visit the Thyssen Museum, a more compact but impressive art museum with more of an international flare from medieval times to modern day. Dutch renaissance, French impressionists and modern art - it‘s all there. Afterwards, we walked through the older part of Madrid and saw the palace and Plaza de Mayor.
One evening, Gys took us to a superb wine store - Lavinia. A huge, high-end store with wines from around the world and prices from Eu 5 to Eu 13,000. A young lady took us around the store, showed us their selection of Spanish wines and told us all about the various regions. Needless to say, we stocked up on a variety of Spanish wines. 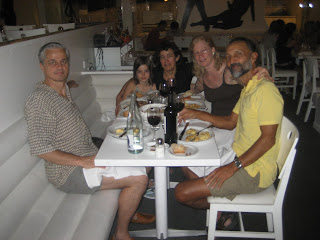 By staying with Gys, Paloma and kids Julia, Diego and Marina we not only got to experience family life in Madrid, but saw first hand the interactions of a blended Dutch-Spanish family. It was common to hear three languages spoken all at once (Spanish, Dutch and English). But when a discussion heated up, they usually resorted to the fast, loud staccato of Spanish.
Also of interest, like most of Spain, the family all seemed to be a bit sleep deprived, staying up really late at night and getting up relatively early in the morning (of course, this is summer). 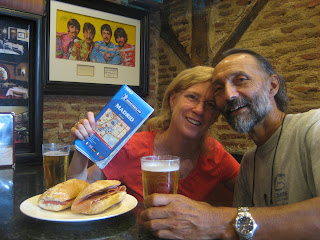 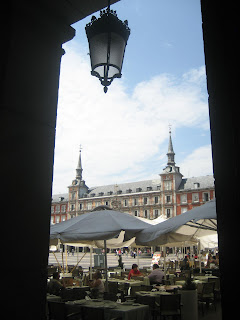 July 2 - Off to the family mountain home in Lozoya 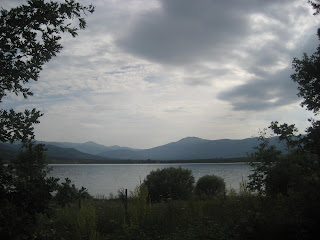 About an hour north of Madrid, Gys has a beautiful home in the mountains overlooking a lake in the village of Lozoya. We spent several days there relaxing in the cool and tranquil setting. We took some short side trips to the village of Rascafria, where there is an old monastery, played “folo” tennis (it’s played on a short court with a paddle and a special ball) and went on a mountain bike ride (just Gys and I) that went straight up the mountain. We ascended from around 2800 feet to just over 6000 feet. I required frequent breaks and ended up having to walk part of it. But I made it! Going down was fast and exhilarating.
July 2 - Side Trip to Segovia
To get to Segovia we took the narrow and windy mountain road from Lozoya. It only took about forty minutes. Our first sight was of the Roman aqueduct that spans the entrance to Segovia. Built in the 1st century, it’s over a mile long, made of granite rock with no mortar and was operational until just a few years ago. That’s not bad for something to be functional for two thousand years!!! The arches are exquisite. One cannot but marvel at the engineering feat of how they constructed the massive arches.
We then wound our way through the narrow streets to Plaza Mayor, peeking in at the ancient Gothic cathedral on the way to the Alcazar Castle. The castle was quite a sight and had a majestic view of the surrounding hills. Although it looked like something out of Disneyland, one of our tour books stated that it was used in the movie Camelot (with King Arthur and Sir Lancelot).
On a Sunday afternoon, the typical Spanish family goes out to eat. The feasting can last  for hours. We drove to a huge, local restaurant and did our part. We sat on the veranda and feasted on some local dishes comprised of pork, lamb, salad and yes, wine. Very tasty and filling.
A couple of things I haven’t touched on. During our stay with Gys and Paloma, she prepared some very nice Spanish dishes for us. The first evening she prepared the quintessential Spanish dish - paella, prepared with a variety of sea food. Other dishes she made included a typical Spanish omelet made with eggs and potatoes; gazpacho, a cold, soup-like dish made with tomatoes, green and red peppers, onions and garlic; a rice dish, also eaten cold, made with white and wild rice, tuna, sardines, capers, olives and tomatoes.
The other thing is that we’ve been watching a lot of soccer - football to the rest of the world. Spain and the Netherlands have been doing well. In fact, there is a chance they could be in the playoffs. It’s been a lot of fun watching all the excitement.
Posted by George at 1:32 AM 1 comment:

The Windmills of Consuegra 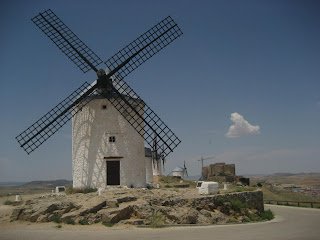 June 29 - Consuegra and on to Madrid

On leaving Toledo, we decided to double-back a few miles to the small town of Consuegra because we wanted to inspect the classic La Mancha windmills up close. 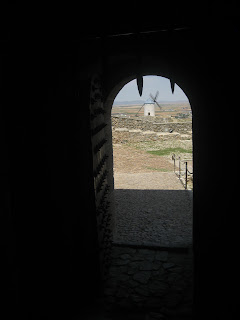 Winding through these hills one can really imagine Don Quixote riding past these windmills (here they’re called molinos de viento). We stopped at a tourist office housed in one of the mills. The two men working there were among the friendliest and most helpful people met at tourist offices in Spain. They told us all about the history of the windmills and even of the origin of the word Califonia. According to them, it came a Cervantes novel that described a place that he called California. To the Spanish, the far western part of the U.S. turned out to be very similar to the description by Cervantez, so the Spanish ended up calling what they saw California. 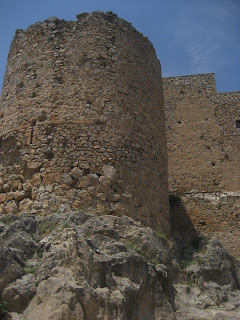 Getting back to the windmills in Consuegra, there was a medieval castle that sat atop of the hill where all the windmills were situated. We toured the small castle, which offered great panoramic views of the area. As we entered the castle, we could see that the perimeter walls were five meters thick! The castle itself was in the process of being restored but still offered unique insights on how the knights lived back in the 12th and 13th century. As in so many of these places we‘ve seen, again, it was the destructive Napoleonic forces that unleashed all the damage done to these old buildings.

In the end, we were glad we had made the effort to come to see where Don Quixote had ridden. 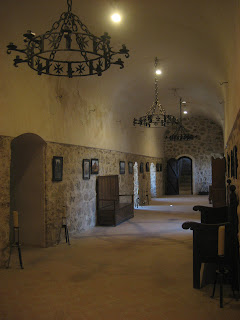 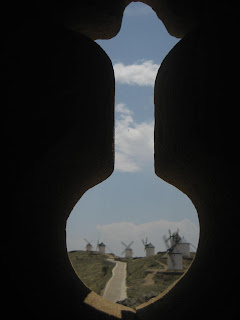 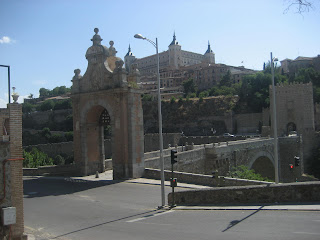 It took about three hours to drive from Cazorla to Toledo, retracing some of our steps past the towns of Ubeda and Baeza. One of the amusing oddities you can spot along the highways are huge black silhouettes of bulls. In the U.S. I’m sure they’d have company logos on them. Here not. Just big and black. 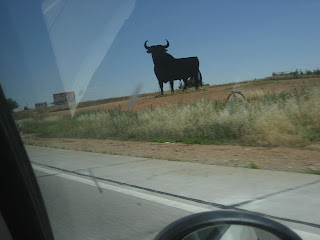 Toledo is in La Mancha country, where there is something other than olive trees - we started seeing fields of grape vines all around. On approaching Toleda, we saw some of the famed white windmills too and were pretty sure we got a glimpse of Don Quixote riding on his horse.

Toledo is on a hill and is one of the old ,walled cities. We crossed the Tagus River and then entered through a large, arched gate. This the town of the famous painter, El Greco.
We found our hotel, Alfonso VI, quickly and were able to park right next door. The hotel was in the middle of the old part of town, opposite the Alcazar. 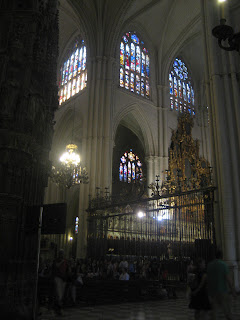 After settling in, we visited the main cathedral, and walked what we thought was the El Greco museum. We paid the entry fee only to find out once inside, that it was the Iglesia de Santo Tome, a famous small church that houses one of El Greco’s most famous painting - Burial of the Count of Orgaz.

Toledo was pretty typical of the old, walled medieval towns we had been visiting. During our stay in Toledo, we followed some of the winding, narrow streets to find tiny plazas and nooks with cafes, bars and stores carrying ceramics, knives, swords and the kind of armor knights used to wear. I don’t know who buys that stuff - maybe some of the throngs of Japanese tourists we saw wander through the streets.

We walked through the Jewish quarter and down to the Tagus River and got a glimpse of Toledo from the other side - a view that El Greco used to paint one of his paintings. But I think he must have gone a bit further out. The view we saw was good but not as dramatic. 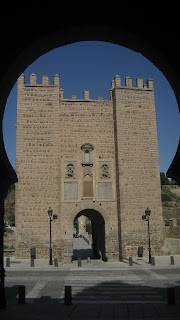 One Toledo’s main plazas, Zocodover, was very near our hotel. It had a lot of granite benches to sit and people watch. On the outskirt of the plaza are restaurants and even a Mc Donald’s. We checked the menu, and yes, it sold wine and beer.
We often make do with tapas for dinner because restaurants open so late at night. It still is hard for us to eat at 9pm or later, when the typical Spanish are starting to head for the restaurants. Our routine has consisted of having wine and cacahuetes (peanuts) in our room in the afternoon, heading out for a walk and ending up at a tapas restaurant for an (early) bite to eat. 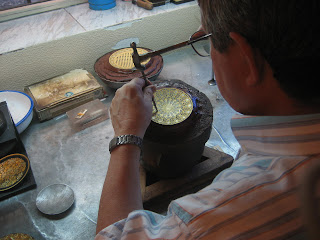