Aranda de Duero and back to Madrid

Aranda de Duero and back to Madrid 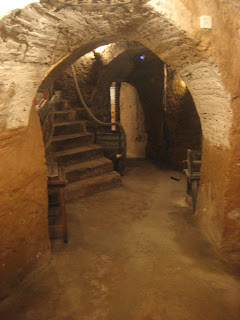 We drove south to Aranda de Duero and checked into Hotel Julia, in the center of town. Aranda is not known for anything particular, though tourists do come here for the lamb roast, reportedly the best in Spain. Also, like Laguardia, it too had underground wine caves, of which we visited one. We just came here as a pit stop between Rioja and Madrid. But surprisingly, we liked the town. 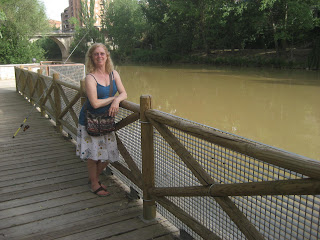 Aranda has a nice river running through it and a city park abuts it. We settled into a spot in the park near the bar (which is right next to the kiddy playground). Young mothers can have a glass of wine while they watch their toddlers play. Very cultured.
The park truly exemplified Spanish family life. Families, eating, playing, fishing and otherwise enjoying the park. Several dads were walking around with their young toddlers. Diane spotted some young parents smoking around their babies at times blowing smoke near their faces. That kicked in Diane’s anti-smoking campaign. She marched over to the young parents and gently scolded them in Spanglish. They all reacted with surprise as if they hadn’t thought about the impact of the smoke to their babies. I think she did some good, at least making those parents think twice before blowing smoke into the faces of babies. 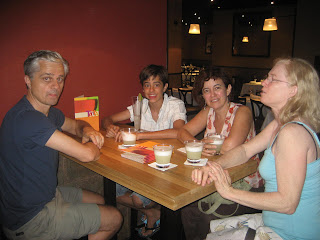 We drove back to Madrid the following day with a detour to a city that was at the center of Islam in medieval days - Guadalajara. We visited the Gothic Palacio del Infantado, a relatively plane looking palace from the outside with a beautiful façade courtyard. We had lunch near the palace, on a park bench, munching on a bagget, cheese, ham and fruit.
Later that afternoon we arrived back at Gys and Paloma’s pink villa in Madrid. Of the three kids, only Diego was left home - and he was off to the north of Spain in the morning for surf camp, Marina and Julia already were at their activity camps. 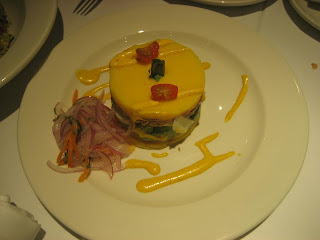 In the evening the five of us set off to a nearby Peruvian restaurant. We started off with a strong Peruvian drink, a Pisco Sour, made of egg white, limes, sugar and Pisco. That was followed by several exotic appetizers ranging from a ceviche, to a baked dish with potato and octopus. I was about full from the appetizers, when dinner arrived - for me, a lightly cooked fish with yet another type of potato (Peruvians have over a hundred types of potatoes). Luckily, a couple of good bottles of Rioja wine enabled me to consume the dinner too. It was  a scrumptious meal. No room for dessert, though.
On our last day in Spain we stayed at the Madrid Airport Hilton, since our Easyjet flight to Amsterdam was an early one. The hotel décor was ultra-modern, nothing like the hotels we’d been staying at. But our room was roomy and comfortable, the pool, nice. In the evening at dinner, we watched Germany beat Uruguay 3-2, in what was a fun and exciting game to watch.
Posted by George at 11:16 AM No comments: 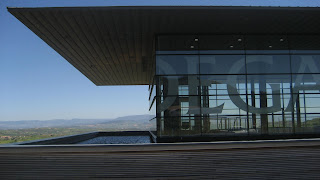 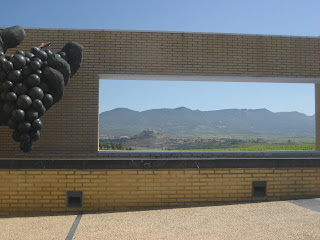 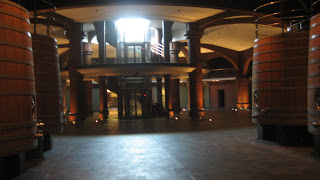 On Wednesday, after a superb breakfast at our inn, we drove to the nearby town of Briones where the bodega Dinastia Vivanco has a wine museum.  It’s an amazing museum, in that it details the entire history of wine, the process of wine making and all its related functions, such as the making of barrels, bottles, corks and even cork screws. It took us a full two hours to get through it (at a quick pace). Afterwards, we took a tour of the Vivanco Winery, which was good yet disappointing, in that it was all in Spanish. 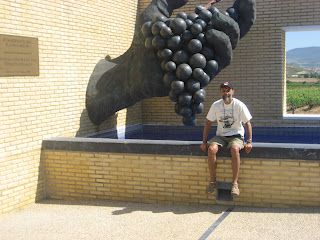 When we got back to our winery/hotel, Jesus Puelles, the owner, was ready to give us a personal tour of the winery - in English. The Puelles winery dates back to the early 1800’s and, though not nearly as big as Vivanco, it’s impressive. They follow organic vineyard practices in growing their (mostly Tempranillo) grapes. They only use estate grown grapes in their wines and produce about 200,000 bottles a year. 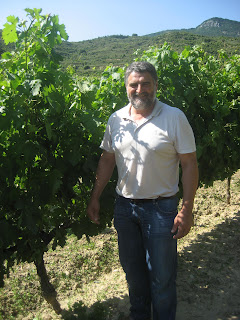 Jesus told us that in Rioja, wineries typically produce a crianza, a reserve and grand reserve. Mostly all are made of Tempranillo. Other red varietals grown in Rioja are Grenache, Mazuela and Graciano. White varietals are Viura and Xarello.The Rioja DOC controls these types of wines by mandating them to be aged as follows: a crianza must be aged in oak for one year; a reserve must be aged in oak for two years and bottle aged for one year; and the grand reserve must be aged in oak for three years and bottle aged for an additional two years. A little different from what we do in California where the winery may tell the prospective buyer to age the wine for a year or two before opening the wine.
One of the ways Jesus sells his wine is through his wine club. Members pay as the wine is made. First they pay up front for the cost of a barrel, then pay for the grapes, lastly for the bottles. In the end, a member gets 300 bottles of wine for about $3 per bottle. Not a bad deal for a good quality wine. But you have to like Tempranillo.
Later that evening, we watched more world football (soccer) action - Spain against Germany. To us it seemed like a pretty even game, not many fouls, played in a very gentlemanly manner. In the second half, Spain got a break and from a corner kick, headed the ball in for a goal to win the game. It will now be Spain and the Netherlands - and we’ll be in the Netherlands for the title game!!!
After our two-day stay at Bodega Puelles, we reluctantly packed our suitcases and hit the road. We visited, Laguardia, an ancient walled city known for its many underground (cave) bodegas and spectacular views of the area and the Pyrenees. We only stayed for a short time.
Posted by George at 10:57 AM No comments:

Into the wine country


On our drive north of Madrid, we began to see many vineyards. Our first winery visit had been set up by Gys. He knew the owners, Alonso and Maria. Vinedos Alonso del Yerro http://www.vay.es/  is in a small town of Roa, west of Aranda de Duero and lies within what arguably is the premier wine region in Spain known as Ribera del Duero. It took some serious searching but after a couple of misguided turns we found it.

Maria was waiting by the house and greeted us. She spoke excellent English and showed us the vineyards, talked about their vineyard philosophy and then took us inside the winery. A couple of interesting things I noted from the tour: 1) they have had the soils of all their acreage analyzed and mapped then parceled into different vineyards from which they make their wines. Soils that were not that healthy, they had the soil amended to improve the grape quality. 2) they’ve named each vineyard parcel after one of their four children; 2) they adhere to organic farming techniques, don’t use pesticides and don’t irrigate; 3) one of the things that surprised me was that they fermented the must in huge 5000 liter vertical French oak barrels (they only have Tempranillo) .

After a while, Maria’s husband, Alonso, met us at the house. He spoke little English, so Maria interpreted much of the conversation, but also we practiced hard on our halting Spanish. Alonso background is the pharmaceutical business. He was the CEO of a family-owned company and in his mid-forties decided he needed a career change. In the late 90’s he quit the family business and bought an existing vineyard and started the AY winery.
He began by hiring top people - one of France’s best wine makers, a soil expert and later an enologist to help get things going. Needless to say, it’s not a winery run on a shoe-string. After the tour, Maria and Alonso invited us to lunch. We enjoyed a fabulous meal prepared by their chef on white linen table clothes served by one of their helpers in the dining room overlooking the vineyard. Each course was served with a different AY wine and culminated with their top wine, appropriately named Maria. Dessert was a delicate and rich chocolate ice cream served in a crystal bowl, followed by an espresso coffee, chocolates and more wine outside. Not a bad lifestyle, I thought.
After our visit with Maria and Alonso, we drove off to nearby Santo Domingo de Silos, a tiny village known for its Gregorian chants by monks from the Benedictine abbey. We stayed at an old inn, the Hotel Tres Coronas, which is situated in the town’s main plaza, across from the monastery.
This is another one of these ancient places. The Visigoths were here as far back as the 7th century. The courtyard of the cloister has a beautiful evergreen tree that we were told by two of the monks, was over 100 years old. Apparently, the cloister has an excellent Romanesque art collection, but we never had a chance to see it.
In the evening, at 7p.m. we went to the cathedral to listen to the monks chant. About thirty monks walked in, candles were lit and the chanting commenced. It was interesting but not as moving as we had anticipated. It went on for about 45 minutes, after which they formed a line and walked passed us on the way out.
The next morning, after breakfast, we drove north towards Burgos and then eastward to Logrono. Our destination that day was nearby. It was the micro village of Abalos, in the heart of Rioja wine country. We were staying at a hospederia, in this case, a winery/hotel. The Bodegas Puelles is a family run winery that has been around for nearly two centuries!
We knocked on the door after which an elderly Spanish lady stuck her head out of the window on the second floor. After some discussions (that we weren‘t all that clear of), she decided to let us in. She showed us all the available rooms and told us that we had our pick. She also showed us the pool, the Jacuzzi, sauna and breakfast room. We could get used to this place. 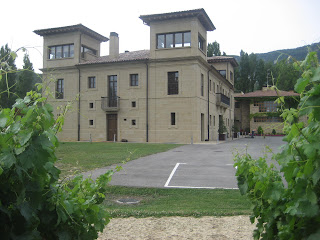 After settling in we took a drive around to find a place to eat. It was 4pm and everything was either closed or the tapas bar offered a selection of day-old sandwiches (that we would not have offered a dog). No open grocery stores either. Even the bodegas were not open. It was a very frustrating afternoon food hunt. But once back at the winery, our luck changed.
Anna, the bookkeeper at the winery, greeted us and took us into the winery’s tasting room. She spoke good English and offered us a taste of most of their wines. Afterwards, she told us that if we wanted, we could sit outside and have more of any of the wines. All we had to do was ask. Needless to say, we took her up on the offer and stayed put for the rest of the evening.
Posted by George at 10:38 AM No comments: