To The Netherlands and Home 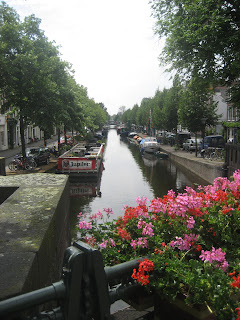 July 11 - To The Hague, Netherlands then Home

I couldn’t leave the blog unfinished. So here’s the last installment….for now.

Very early in the morning we left for the airport to get on our (Easyjet) flight to Amsterdam. Everything went like clockwork until we got in the air and the pilot announced that a cockpit warning light detected a problem with one of the rear doors. We would have to return to Madrid and have it checked out. Darn.

We landed safely without any incidence. The door problem was corrected but some other issue surfaced preventing us from taking off. It too was resolved. But then the pilot reported that he was having problems getting another flight plan approved and it would be a little longer before we took off.

About two hours after returning to the Madrid we finally got back in the air. This time everything went smoothly. We arrived in Amsterdam an hour later. Schiphol is truly a world class airport. It has lots of good shops, restaurants, hotels and great ground connections by train and bus right at the airport.

We got train tickets and made it to The Hague in no time. We had reservations at a small hotel in Scheveningen, Hotel Corel. It was a big, stark change from the Hilton in Madrid. Small, two old twin mattresses, shag carpeting, a broken toilet seat and an (intrusive) view of apartments next door (and they to us, of course). This was a three star hotel? However, the breakfast next morning was superb and its proximity to the boardwalk area of Schevenigen was excellent. 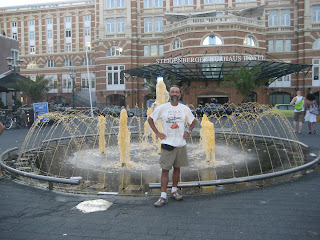 Holland was getting ready for an epic World Cup soccer championship game against Spain. Fountains were spewing orange water and lots of people were walking around with orange clothes. Excitement was building. Incidentally, orange is the color of the Dutch royal family - the House of Oranje. But today, the color orange mostly symbolizes being Dutch.

We ended up just walking around visiting familiar spots, sipping coffee or beer at cafes and enjoying the sights for two days. After that we took the train to our friends Maarten and Maria in Amstelveen (near Amsterdam). We stayed with them for another two days. We ate a special dish Maarten cooked up - pulpo (octopus). They had brought back from Spain after their son had spearfished it. Very tasty. We helped M&M plan their upcoming trip to California and went out to eat at the Blauw Indonesian restaurant in Amsterdam to have rijstavel, a very typical Indonesian dinner consisting of about twenty separately prepared dishes. Delicious. 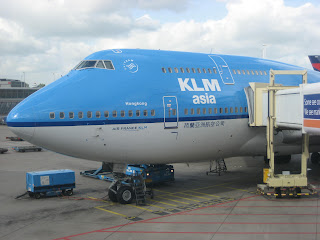 In the morning, M&M took us to the airport to catch a KLM flight back to LAX. Vacation was over.
Posted by George at 10:26 AM No comments: