Dave and I left Lahaina Roads in April of this year on the hard at the southern end of Grenada at the Spice Island Marina. The plan for the sequel to our Caribbean adventure is to sail westward to the Dutch Antilles, Colombia, the San Blas Islands, Panama (and through the Canal) and up the west coast of Costa Rica to Golfito. Barry, a friend of Dave’s from South Carolina, also is joining us.

The flight from LA to Miami went without a hitch. But as soon as I landed, I noticed that my flight from Miami to Grenada (via Barbados) had been cancelled. Not good, I thought. I went a couple of rounds with American Airlines agents, stood in various lines for long times and finally got some results They re-routed me through Puerto Rico to get to Grenada at about my original time and on the same flight as Dave and Barry. Nice. 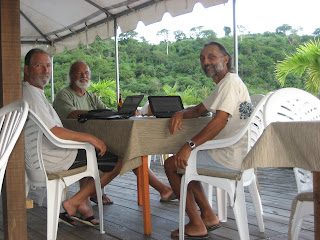 The flights went as planned and all three of us arrived in Grenada on time. Even my bag was waiting for me - in spite of all the re-routing it went through. I deemed it a miracle.

By the time we got to the boatyard from the airport it was dark and nearly 10pm. After getting past the guard at the gate we started to look for the boat. It was an odd sensation meandering around all these boats sitting up high out of the water. When we had left Lahaina Roads there only had been a few boats. Now it seemed crowded.

Finally, we found the boat, climbed up the ladder and opened the hatch. A musty, damp and earthy smell permeated throughout the boat. Some things in the aft cabin were thoroughly wet. But for the rest of it, the boat looked pretty much as we had left her. We crashed and all had a good, yet steamy-hot, night’s rest.

In the morning, after coffee, we got to work drying the gear and clothes and got the sails out on deck. The rest of the day was spent getting the main and the sail bag on the boom, the same process with the mizzen, and getting the dodger in place. We called it a day and went for a beer at the conveniently located marina bar.

The next couple of days were spent on more tasks in preparation for being put back in the water. The boatyard was a beehive of activity, with owners arriving daily, preparing their boats, boatyard crews doing last minute repairs and painting the bottoms of boats and the sound of the tractor as it maneuvers the boats towards the crane, where the boat is placed in the water. 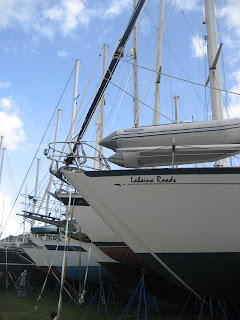 On Monday, since Barry had not been to Grenada, we decided to go to St. George, the capital of Grenada.. To get there, we made use of Grenada’s handy bus system. Comprised of nine-passenger vans, it’s efficient, inexpensive and frequent. The mini-buses have a driver and a helper, who’s job it is to locate possible riders and to take the money (although once he gets the money, he passes it on to the driver). The drawback to the mini-buses is the loud rap-reggae music that one must endure and the risky NASCAR driving techniques that are often employed by the drivers as they try to maneuver through the hectic traffic.

Be that as it may, we’ve used the services every day and found the mini-buses a great way to get around. St. George was far better than the first time Dave and I visited it (a Sunday - when nearly everything had been closed). On this day, it was bustling with people and activity. The adventure culminated with a large Carib draft beer at one of the local joints along the waterfront.

Tomorrow morning we're scheduled to be put back in the water. Another day of excitement.
Posted by George at 2:20 PM 5 comments: