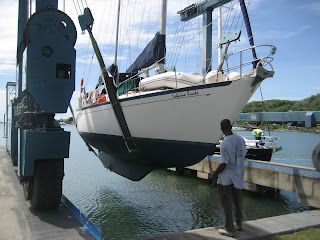 After the preparation for getting the boat back into the water was complete, the boat yard crew expertly moved us back in to Prickly Bay. It was good to be afloat in the bay again, feeling the gentle rocking motion of the sea instead of being high up in the air on the hard. Now all that was left to do was refueling and food provisioning.

Early Saturday morning, under a clear blue sky, Lahaina Roads was ready for a sail. We pulled up anchor and proceeded out of Prickly Bay into the Caribbean Sea. Soon we were under sail with a full mizzen and genoa, heading due west. Isla Blanquilla was about 160 miles west of us. If everything went as planned, we'd be there the following day before sunset. 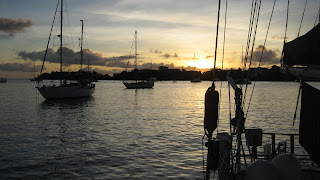 The sail began as a classic downwind run, the boat yawing a little to port, then to starboard, while the autopilot worked feverishly to correct and keep the boat on a fairly straight course. We relaxed, popped a can of beer and enjoyed the ride. What could go wrong.

By the afternoon we first noticed that the refrigeration system was running unusually warm. After checking it out, it appeared that the compressor was malfunction. There went the cold beer!

As the evening drew near we had a cocktail, followed by a steak dinner with a small glass of Cabernet. As Barry put it, "We were living large."


One hour long watches started at 9pm, which gave each of us a two hour cat nap. We encountered some ship traffic throughout the evening, with one ship passing off our bow by just a half mile. A little too close for comfort. But the rest of the night was uneventful and warm with a starlit sky and a new moon.
Sunday morning, our second day out of Grenada, we decided to hoist the main. The Honda generator was busily topping off the ship's batteries, when it revved up and slowed down in an unusual manner. A burning odor began to come from below, soon followed by dense black smoke belching from the portside cockpit locker. Not a good sign!
Barry immediately went down below to check the engine room. After determining it was safe to open the engine room door, he discharged the fire extinguisher in the engine room, which fortunately contained the smoldering fire.
After the smoke cleared, it appeared that the battery charger had shorted out causing it to overheat, burning its plastic casing and the wood panel. We were lucky - any fire aboard is not a trivial matter. And fortunately, the rest of the afternoon didn't provide for any more adrenalin-filled events.
In the evening, we sat down to dinner and had pork chops, salad, mashed potatoes and gravy with a half bottle of Cabernet. Good food, good company and a spectacular setting. All in all, not a bad ending to an exciting day.
On the second night out, we decided to switch to 1 1/2 hour shifts, giving each of us three hours of sleep. By morning we all agreed that this was a better way to go - we were all well rested. 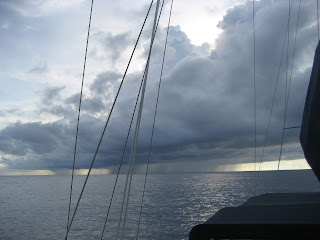 An occasional squall now was passing through. During one of the more intense squalls, we got out the soap and took a shower on deck. Needless to say, timing is everything - you don't want to be caught fully lathered and have the squall pass you by. 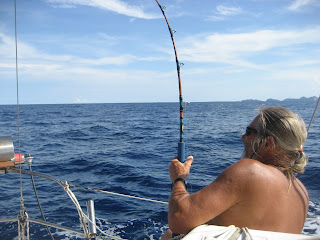 For once, fishing was good - that is to say, the fish were biting, for nothing came to the table. Dave was trolling with two lines, when suddenly one of the reels screamed in a high pitch alerting us of a hefty strike. Soon we spotted a big marlin jumping out of the water. It was not happy! Wow, that was something else! The marlin acrobatically jumped out of the water once more to fight for its release. It succeeded. I think we were all a bit relieved because it was too much fish for us to bring aboard; too much fish to try to eat. So it was best left in the ocean to have a chance to fight another day. And for us we'll leave it as the big one that got away. Pheewww!!! 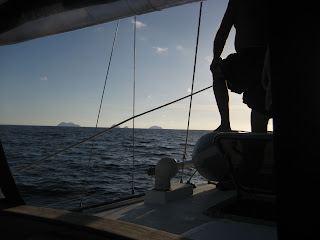 We passed several island groups that would have been worth a stop. But with the problems we had encountered, we decided to forgo the stops and continue onward to Bonaire. By mid-day on Monday, we had passed the Los Roques group, while sometime at night we were along side of Aves de Barlovento and Aves de Sotavento. These would have been outstanding places to observe birds and hang out on the white sandy beaches. Our guidebook wrote of those islands having over 200 species of birds.
In the morning, Bonaire was off our starboard bow. When we approached the southern end, we were greeted by a large flock of flamingos flying by - strange seeing them over the ocean. They were very sleek looking birds, intent on finding something out there or so it seemed.
We rounded the southern end of Bonaire and motored to Kralendijk, the main town on Bonaire. There is no anchoring allowed in Bonaire since the entire island is a marine park. So we picked up one of the many available park moorings. We had arrived. 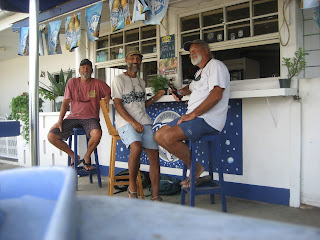