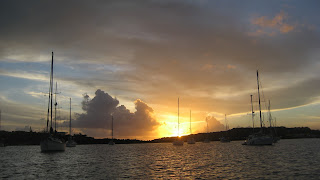 The sail from Bonaire to Curacao was all too familiar to us - it entailed  motoring. But it’s somewhat understandable in that October and November are months of transition with weak or non-existent trade winds and squirly currents.

From Bonaire to Curacao is about 35 miles - an easy day sail. By mid-afternoon, we rounded the southern tip of Curacao and spotted the low-lying island of Little Curacao to our south. We headed up the western coast of Curacao to Spanish Waters, a well protected anchorage south of the capital city of Willemstadt.

With a tight and narrow entrance, Spanish Waters is easily navigable during daylight hours but certainly not at night. We located a spot among other vessels and dropped the hook. With a backdrop of a steep rocky hill, it was a very tropical setting. Time to have a beer and relax. 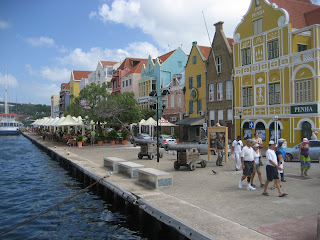 The following day we took the bus into Willemstadt. We found the customs building quite easily. But finding the immigration office seemed more like one of those rally games where you get little hints that get you closer to your objective. It took us nearly two hours to find immigration with lots of help from a friendly staff at a law office. But once there, our luck improved. We met a British fellow, Peter, who offered us a ride back to our anchorage and offered us lots of local tips. We finished up the day with a round of Heinekens at Mermaid’s.

While anchored in Spanish Waters we’ve had a number of rainy days. The squalls come and go quickly, sometimes raining so hard that we’ve had opportunities to go on deck and take showers. We’ve also had time to see a bit of Curacao. Willemstadt is a picturesque city made up of an older part, Punda, and the newer district across the Anna Bay known as Otrobanda. Connecting the two districts are two bridges - the Queen Emma Bridge, a pontoon pedestrian bridge that opens for shipping traffic, and the impressively high Queen Juliana Bridge for car traffic.


Although Punda’s architecture is quite fascinating being distinctly Dutch and unusual  here in the Caribbean, the stores are touristy and mundane. Gucci, Benetton, Ralph Lauren and Calvin Klein are some of the headliners. But we did find a nice little bar that served very cold beer and Dutch crockets. 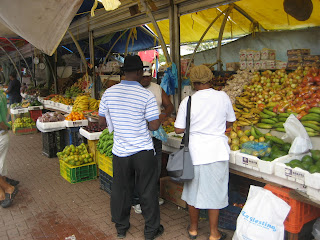 There’s a colorful street along one of the quays that’s home to the Floating market. Made up of Venezuelan fruit, vegetable and fish vendors, on one side they sell their goods while on the sea side, lie the small wooden boats that they live on. We also dropped in to visit the Maritime Museum, housed in an old 18th century building. But we decided to leave it for another day. 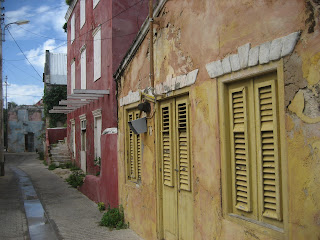 Otrobanda (which literally means “on the other side”), does indeed lie on the other side of the Punda neighborhood. We walked across the pontoon bridge and followed a walking path tour described in one of the guides. We walked through twisting little alleyways and passages and found interesting old structures, many in a decrepit state.

We ended up walking to another touristy area in Otrobanda that had a hotel-resort,  more high-end retail stores, bars and a quay for a cruise ship. While there, we watched hundreds of pink tanned tourists pour off the ship for their two hours of shore leave. Didn’t look real fun to us. We had lunch at a local corner dive that had an unusual menu - you could order many of the dishes in several sizes, each with it’s own price. We ordered a plate of stew, salad and fried potatoes. Tasty.

One afternoon, we took the dinghy into a small bay near us to check out a snorkeling spot we had heard about. We walked across a narrow path to the ocean side and found a beach with some shacks next to a huge,  anchored oil drilling platform. We found out from some people there that the snorkeling area we were looking for was just a hundred yards off shore.

It turned out to be a great spot with a sunken tugboat in shallow waters and many types of fish and coral, including bright yellow trumpet fish, Christmas Tree worms, soft tubular coral and much more sea life. We really enjoyed the snorkeling. On our return there were small sabots with young kids in them racing around the anchorage. It was a lot of fun watching the kids sail. 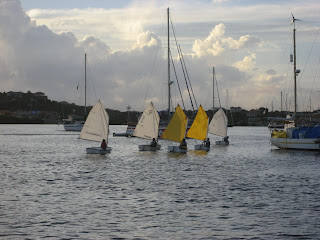 Grocery shopping is easy here. The grocery store sends a free bus to the dinghy dock at ten each morning. It waits for an hour at the store and brings you back. The store is a typical grocery store and has lots of local, American, Dutch and Indonesian foods.

Our current plan is to check out in the next day or so, head up the coast to Santa Cruz Bay and anchor there for a couple of days. From Santa Cruz we’ll head for Aruba and pick up Marty for our sail to Cartagena, four hundred miles away.