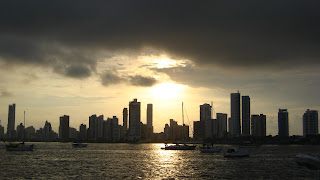 Our stay in Santa Marta was short. Surely we missed opportunities to see some in unusual  things, including the Tairona National Park, the Sierra Madre and a place they call the “lost city”, a Kogi Indian civilization that was discovered in the mid 1960‘s. It’s not getting there, though. A couple of backpackers we met had made the sojourn - it took them five days of dense jungle hiking and traversing rivers. Today, the Kogi Indians live in the Sierra Madre range. To read more about their interesting culture google them. Here’s an example of one of the readings I found - http://www.labyrinthina.com/kogi.htm

We had good winds out of Santa Marta and were fortunate to sail most of the way to Cartagena. But it was an uncomfortable sail with the seas coming from the quarter. The winds and seas were choppy and lumpy. The boat felt like a little cork bobbing in the water from one side to another. To even just sit, we had to hold on. But we were thankful just to be able to sail.

On a sailboat, the last few miles to a destination always seem to take forever. We could see the numerous high rise buildings of a Miami-like Cartagena as soon as the sun came up. But it took several more hours to make the approach and come though the long channel. The entrance of the bay still has the sentry forts from the old Spanish colonial days (circa 1500), protecting the city from Sir Francis Drake and his cronies. 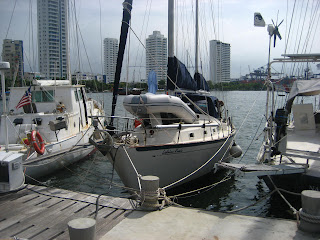 Once inside the bay, getting situated at the Club Nautico marina is no simple matter. It’s Mediterranean-style berthing, with a twist. A swimmer needs to swim out and tie either your bow or stern lines to an underwater line. This is all happening while you squeeze the boat in between two other yachts. But in time, we got Lahaina Roads snuggled in between the boats, with her bow facing towards the dock.

Club Nautico marina has seen better days. The docks are in a state of disrepair, the showers are a make-shift set of stalls next to the office and the docks are full of booby traps - you really have to watch your step wherever you walk. Construction seems to be occurring but not at a frenetic pace. Like many other boats, we extended a plank from the dock parallel to the boat (like a diving board), to get on or off the boat. It’s fun and exciting.

At Club Nautico, happy hour starts in the late afternoon. Cruisers who are docked, as well as ones who are anchored, bring their drinks and trade stories on the cruising life, tips for getting things done in town and things to do in Cartagena. It's a fun and dynamic group. Composed of people of various ages, the people are from a number of countries with some being relatively new to cruising while others have been at it for many years.

On one of the days we took a walk to the old walled city. It is not something that can be seen in one day - it’s enormous. The wall itself is four miles long. We stopped for lunch and a very tasty beef steak, rice and beans (con cerveza) at a local restaurant for $4 each. I can see why expats may want to live here! 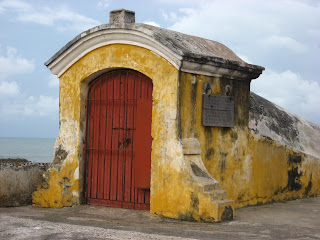 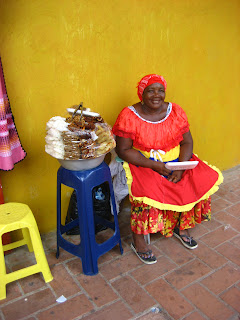 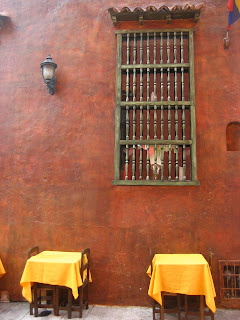 The buildings in the walled city are colorful, with a distinct Spanish colonial architecture. There are fortifications, sentry stations and canons in various areas. We found lots of markets selling tourist trinkets, local tasty treats, cold beers and Colombia’s famous stone, the emerald. It was a lively introduction to Cartagena.

On Saturday, Marty, who had sailed with us from Aruba, took a flight back home to California. 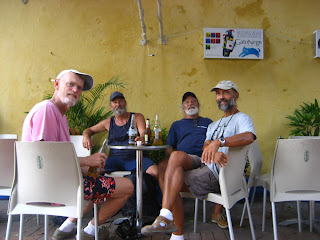