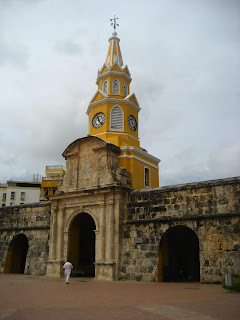 We have now been in Cartagena for quite a while and we can happily report that we‘ve been enjoying the city but are ready to move on. Club Nautico has been fun, specially the happy hours.
We've enjoyed meeting all the members of the cruising community and, it sure has been rewarding to get lots of good information on Cartagena as well as places we are planning to visit.
We’ve put a lot of footsteps in the city’s old quarter, so much so that we can pretty much find our way around all the tiny, circuitous streets. Among the sights and museums we visited were the Museu de Oro and the Museu Naval, which in spite of not having much English posted, were very enlightening. We also toured the huge and impressive fort of San Felipe de Barajas.
The history of this area goes back thousands of years. Some of the indigenous cultures actually thrived right up until the Spanish arrived living along the coastal areas. They were sailors, fishermen, farmers and goldsmith (the latter was probably their downfall when the  Spanish found out). In the Museu de Oro we saw samples of what they were capable of making - they hammered out very intricate ornamental objects out of gold and platinum. 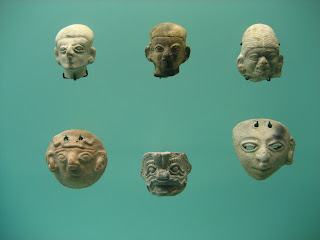 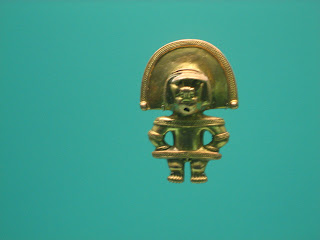 The colonial history of Cartagena goes back to 1533. That‘s when Pedro de Heredia founded the city. Apparently he waged a very successful campaign of plundering the Zenu Indians, including their “Mogote graves” after he found out that the graves often contained substantial amounts of gold.
The future of the young city looked pretty good. But due to its success, only thirty years into its youth, the city started getting attacked by pirates and the English. After a few of these invasions and raids, the Spanish got wise and began to build forts to protect the city. That idea resulted in all the fortifications we see today (not that they always were successful in keeping out the invaders).
One last mention of the history of Cartagena is regarding a figure one often sees depicted here - Simon Bolivar. I don’t know much about him, but apparently he is viewed as a hero who led a number of the countries in South America to independence.
Enough history.
A few days ago, Dave and I picked up Diane and Kristi at the airport. It was almost midnight - way beyond our bed time. But it all went like clockwork. We’ve since showed the girls around the city.
Barry, on the other hand, has been seeing a very nice Colombian lady who he met here at Club Nautico. They’ve hit it off real well, such that we haven’t seen much of him since we’ve been here.
The weather has been warm and a bit humid. Thank goodness for the fans we have in the boat and for the shower that Dave set up on the aft deck. Each evening we all go back there (separately) and cool off and get refreshed. The people here say that this is the nice weather - the hot weather is in May through July!!! Ouch!
One thing that is quite evident here is that there are a number of people who desperately try to eek out a living anyway they can. There are the fruit vendors, the coffee vendors, juice vendors, sunglasses vendors, bracelet and necklace vendors, and so on. They all have their little niche. I don’t know how much they can hope to make in one day, but it can’t be much. One of the vendors I used a lot was the coffee vendor - they sell a tiny cup of strong, sweetened coffee for 200 pesos (about a dime). Very addicting indeed. But wow, how many cups must they need to sell each day to earn a living? 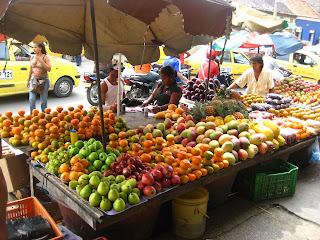 Tomorrow we are leaving Cartagena for an anchorage south of here called Cholon. We plan to spend Christmas there and then head off to the Kuna Yala Islands otherwise known as the San Blas Islands. I doubt that there will be any internet there, so we may not be in touch until we reach Portobelo, Panama. With that, the crew of Lahaina Roads extends all you who follow the blog happy holidays.
Posted by George at 8:01 PM No comments: