Dinan is yet another walled medieval city, with steep cobblestone streets that lead to its port along the river Rance. Our hotel, Hotel de France was located just outside the wall near the train station.


We got registered at the hotel and lugged all our baggage up several flights of stairs. Once ready, we began our exploration of Dinan, passing through its gated towers and into a beautiful wide square. From there we weaved our way through narrow streets, lined with half-timbered buildings and started our descent towards the river. The streets were narrow, the buildings hung over the alley-width streets and the roof-tops protruded numerous “Mary Popins-like” chimneys. 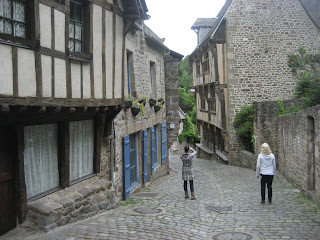 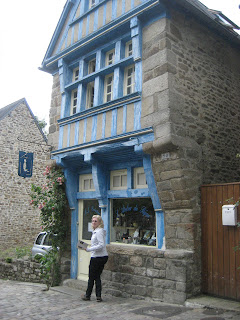 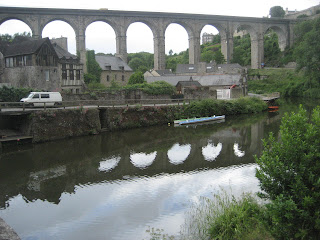 The scene along the river would inspire any painter, but we just came to eat. We settled on one of the restaurants overlooking the river and ended up having a delicious meal and a great view of the river with a background of a modern bridge built with high Romanesque arches.
The next day we drove north to inspect Saint Malo and Dinard. St. Malo is along the Brittany coast and historically has been an important port town. A walled city, it has a fort on a small island that we could walk to during low tide, which we did. Our guide book mentioned that in WWII much of the city was destroyed but later rebuilt with such care to detail, that it is difficult to discern the new from the old. We never saw any evidence of the reconstruction.
After walking along three quarters of the ramparts of the old city wall, we descended back into the town, had lunch and got back on the road, heading for Dinard. 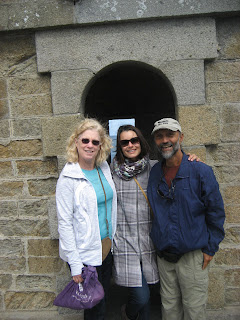 We really enjoyed Dinard. It exuded a rich, nostalgic feel to it as we walked along the seaside promenade gawking at the imposing cliff-top mansions that line the area. The wealthy elite made Dinard their summer home in the late 1800’s. Apparently, they’ve moved on because many of the mansions now appear a bit disheveled.
After having a drink in the park near the beach, we headed home to Dinan.
Posted by George at 11:57 PM