Yet another medieval walled city, Vannes was mentioned in our guide as a “must-see” city in southern Brittany. After getting settled in, we took a “wet” and quick tour of the walled area - superb! With its Gothic architecture, half-timbered buildings, the mote, the bridge, the cathedral of St.Pierre (which is both unique and dramatic), and the waterfront area (Port de Plaisance) where there is a yacht harbor was a pleasant area too. Vannes to me was pretty exceptional.


The following day, we took a short drive to the port town of Carnac, where there is a huge number of alignements that were built by Neolithic people about 4000B.C. We first meandered through the touristy beach area, eventually getting into Trinity Sur Mer, a big yachting harbor with some big yachts. 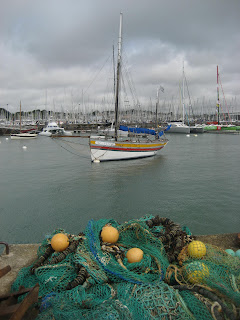 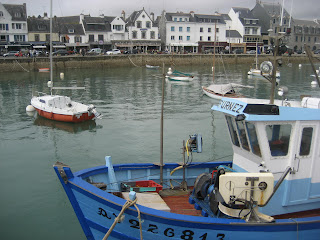 After an espresso “alonge”  (meaning that they add a little hot water to it), we drove to the area of the alignemetns. Our first glimpse of them didn’t impress us - they weren’t much to look at. But when we saw dozens of these stones all aligned and in order of height, it was quite a dramatic sight. 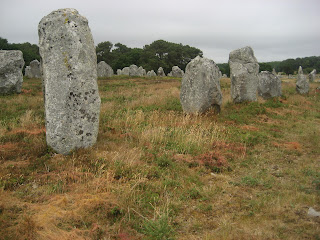 There is no conclusive evidence that has determined what these people had in mind when they built these monuments. But most anthropologists believe that as these people became more settled, they became more ritualistic in their burial practices, therewith erecting stone blocks in commemoration of their dead. We visited several of the sights and were in awe.
We got back to Vannes late in the afternoon. After a rest and a glass of wine, we ventured back out to find a place for dinner (I think we’re back to being hunter-gatherers). We found a small restaurant (La Pomme de Terre Gourmande) with a Brittany-styled menu. Not a sole was in the restaurant as we ventured in. We got great service and had a wonderful meal for all of Eu 38, including wine!
After dinner we made one last walk around the walled city and headed back to our hotel. Tomorrow we are off to the Loire Valley.
Posted by George at 2:01 PM