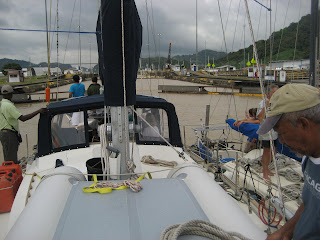 We left Shelter Bay Marina at 1:30pm, as soon as Dracula, our agent, brought our clearance papers and our line handler, Rudy. We headed out of the marina for the “flats“ - an anchorage where we were to meet up with the canal advisor.

We got to the Flats and met up with a smaller sailboat, Carmen San Diego, who we will be “nesting” with (tied up to) as we transit the canal. At that point, Fernando, the ACP (Authority of Panama Canal) advisor, joined us.


We soon were moving towards the first lock 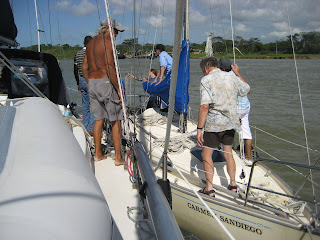 We knew from the advisor that we were going in to the locks behind a large freighter that was moving along the same corridor. The smaller sailboat, Carmen Sandiego, was behind us about a quarter of a mile.

When we got to the lock, the freighter was already getting situated. We did a 180 degree turn to pick up the smaller sailboat and side tie to it. We had to make sure that the ties were sufficiently strong to keep us together when the locks started to fill.

We moved into the first lock tied to Carmen Sandiego. The line handlers on the canal side (four of them) threw us a messenger line with a monkey fist. We caught the lines then attached them to our 7/8” heavy duty lines. The line handlers on the locks then pulled their messenger lines (and ours)  back, and tied them on to bollards on the lock. By the time it was finished, we were situated in the middle of the lock, about 100 feet behind the freighter.


We heard a bell go off, after which we noticed the water starting to churn up around us - the lock was beginning to fill. From what I could tell, the water was filling the huge lock at a rate of about a foot each twelve seconds. Rudy and I manned the two lines on the bow, while we had another crew manning the two stern lines. As the boat rose in the lock, our job was to pick up the slack in the lines, thus keeping the boat centered - sounds easy but you had to pay attention because of the water forces at play. But about eight minutes later, the water settled - we had reached the top of the lock. All was good. 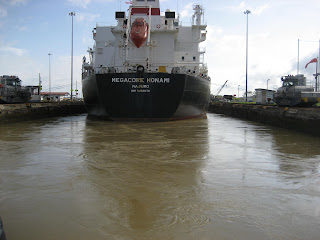 The freighter  soon started her engines. We could see the wake from her props swirl the water around us. She moved ahead towards the next lock.

By the time the freighter got settled into the next lock, it was our time to move. The line handlers on shore took our lines off the bollards but attached their messenger lines to it and fed it to us. We pulled in our four lines right up to the messenger lines and held on to them as the shore crew walked forward with the boat to the next lock (in behind the freighter again).

That’s how it pretty much went for the three Gatun locks until the last one, when we could look back and see a panoramic view looking downward to where we had been. Pretty mesmerizing. We had climbed quite a ways.
At the completion of the third lock, we motored out and untied Carmen Sandiego from us. We then proceeded to the anchorage in Gatun Lake, where the pilot boat came and picked up our ACP advisor. After that we tied up to a huge buoy for the night. It was time for refreshments. 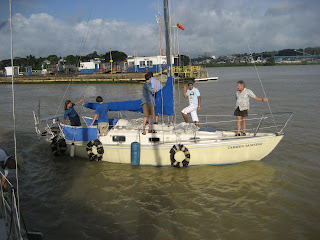 That night we dined on pork chops, salad, and couscous. Rudy, our line handler and guest was a fun guy. He spoke excellent English, knew a lot about the U.S. and knew more about American sports than I’ll ever know. All-in-all it had been a pretty exciting day.
In the night,, we had hoped to see crocodiles up close, but we only spotted a couple of them a hundred yards away from us. Howler monkeys were supposed to be around too, but with the building going on around us of the new canal locks, the monkeys weren’t to be found.
The following day, at 6:50am, the pilot boat delivered Fernando, our advisor, back to Lahaina Roads. We got the engine started and soon were on our way to Gamboa, a small town about 19 miles away. 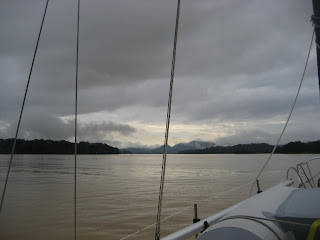 Motoring through Lake Gatun was bucolic. The rainforest comes right along the banks of the lake. Once in  a while, we encounter a freighter quietly skimming along the water steaming north. We spotted lots of birds but no croc sightings nor did we see the harpy eagle, an endangered Panama bird with a two meter wingspan that makes his home along the canal.
Now for just a spot of canal history - the French tried to build the canal in the late 1800’s to the early 1900’s but eventually gave up after losing over 20,000 people to malaria and yellow fever and bankrupting the company. Their design was based on the notion to build the canal at sea level without the use of locks. That type of design was much more difficult to build because of the need to dig very deep channels to get through the mountain passes.
When the U.S. took over the work (which is a whole other story), they decided to make use of the Gatun lake. Although that design required locks to reach the lake‘s 84 foot elevation (and another set of locks to get back down to sea level), it didn’t require nearly as much digging. The U.S. also took a very aggressive approach to controlling yellow fever and malaria.
As a result, the canal opened up in 1914. I think it was probably the last major project the U.S. government did that was completed under budget, earlier than expected and with no significant design or construction flaws - a pretty amazing feat.
Back to our transit - during the rest of the second day we passed through the Pedro Miguel lock and the two Miraflores locks. We went under the beautiful Puente del Centenario span bridge which is on the Gaillard Cut, a part of the canal that is on the Continental Divide.
We got out of the last Miraflores lock at 2pm. Shortly afterwards, we released Carmen Sandiego from our side after which a pilot boat showed up to pick our advisor, Fernando. We then motored to the Balboa Yacht Club and picked up a mooring. We were now in the Pacific Ocean and had successfully transited the Panama Canal. 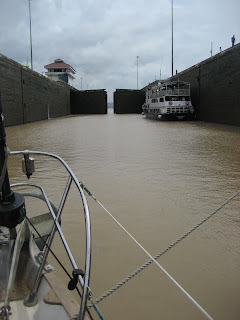 From here, Diane and Kristi fly back home and we venture off to Golfito, Costa Rica. Stay tuned for the next adventure of Lahaina Roads and the Tres Amigos.
Posted by George at 2:00 PM No comments: