After an easy flight over from LA, Jill met us at the airport in Oahu and took us to her home in  Kaneohe Bay. She and Rich in a lovely house live right on the water. They’ve made some beautiful upgrades to the house.

Waking up in the early morning offered a splendid sunrise view - their outrigger that’s berthed in front of the house made for the quintessential Hawaiian setting.


On one of the days, Jill, Diane and Erika went to the Hawaiian Cultural Center while Rich and I played golf at the Kahuku golf course, a small, nine-hole public golf course right on the ocean. Unfortunately, the spectacular setting didn’t appear to improve the marginality of my game.

After a couple of days at Jill’s, we took a twenty minute flight to Kauai. We picked up our rental car (a Ford Focus) and drove to Princeville, the northern part of the island. Located adjacent to the one-of-a-kind St.Regis hotel, our condo is right on the bluff overlooking the Pacific Ocean. From our living room we can watch boats, surfers, pods of whales playing and a chubby tabby cat perched along the bluff. He seems unperturbed with some chickens that meander past him. (Incidentally, chickens appear to be ubiquitous on Kauai. They’re on beaches, along the roads, parking lots and everywhere else we’ve been.) 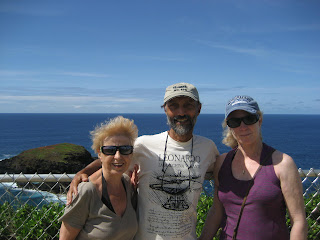 One of the more interesting places we visited was Limahuli Garden. Near Ke’e Beach, it is a beautifully restored garden that depicts traditional native plants and other plants that over the years were brought over from Polynesia. They’ve worked hard to re-create a natural Hawaiian habitat, by removing numerous alien trees to provide more sunlight and opportunity to promote the growth of native plants.


Part of the setting of the garden is the tiered  rock walls that comprise the terracing for growing therewith naturally irrigating such plants as taro and sweet potato. They use the stream that runs from the mountains and divert it into small canals to irrigate. They then manage to return the water to the main stream down below.


At our condo, we’ve really enjoyed watching the sparrows and brightly colored Cardinals dropping in on us for scraps of bread and crackers. They’re pretty brazen, flying right on to the table we sit at and even fly into the living room given half a chance.

On one of the other days in Kauai we enjoyed a trip south to Lihu’e. From there we went inland to the Wailua falls. At first it looked like we would only be able to see them from afar - in of itself a beautiful sight since they drop over170 feet downward. But after a bit of investigation, we found a path to the top of the falls and hiked in. It was a rewarding sight indeed.

Tomorrow we check out of here and head to Poipu, where we'll stay for another couple of days.

Posted by George at 1:12 AM No comments: