June 22 - To the Netherlands

It was a relatively quick drive from Gent, Belgium to ‘s-Hertogenbosch, Netherlands, a town in the south of the Netherlands. ‘s-Hertogenbosch lies in Braband, an area where my mom resided during part of WWII. The town has an old Gothic cathedral built in the 1500’s and a large and comfortable town square where we had lunch. Our hotel was just a little south, in the village of Oisterwijk, so after a brief visit we drove to our hotel and checked in.

Hotel De Leijhof had stately setting with a lush green lawn, a beautiful fountain and rod iron gates - quite a majestic entrance. It turned out to be a very friendly, comfortable and convenient hotel. The village of Oisterwijk also was surprisingly nice, in that it a number of the shops and restaurants were by a park giving it a European “Mayberry“ affect.
But for us ‘s-Hertogenbosch area only served as a quick stop on our way north. So after a big breakfast, we headed north to Elst, to visit with Ton and Marleen. With Google directions we got pretty close to their house, but in the end we succumbed to getting a little help from them. But we were pretty darn close.
Ton was standing in front of their house when we arrived and directed us in. After a short visit at their house, we walked to a restaurant at a nearby park. The restaurant was in an old, classic house. We started out in the veranda, but it became cold and rainy. So we opted for the warmth of the inside dining room where we had an exquisite lunch accompanied with a Spanish Tempranillo.
We were soon on our way again - this time to meet up with Marteen and Maria. It was a greater challenge to find their house in Purmerand (just north of Amsterdam) because of all the irregular, narrow streets in their neighborhood. We knew we were within a stone’s throw from them, but we again had to resort to the phone to get the final directions. Maria ended up riding her bike to where we were - it was simpler than explaining it.
Though we had been to their new house, we had only seen it from the outside, after they had made an offer on it last year. We had an excellent reunion and that evening were treated to a delicious Indonesian dinner at their home.


The next day we had a busy day touring the villages of Monnickendam and Edam (near the more touristy village of Volendam), had croquets for lunch, stopped by a second-hand store called the Kringloopwwinkel, where we bought three small hand-made Iranian carpets for the paltry sum of seven Euros each. Diane and I were elated. We then dropped in to see Marteen and Maria’s newest grandson, Kick, at Hanne’s home.
The following day was a busy one for Diane and I as we wanted to stop in Ede to check on my parent’s graves (which we did) before heading to Rotterdam to meet up with Meredith and Elliot. All went us planned. 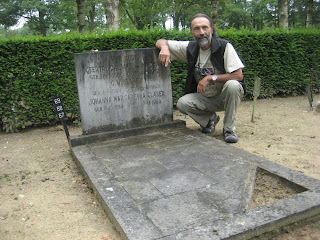 The Dutch have an interesting way of dealing with graves - essentially, families rent a grave site in increments of ten years. If a plot is not renewed, the remains are dug up and placed in a common grave and the plot received a new “renter”. It makes a lot of sense when a space is at a premium. We paid the fees (about $1100) to keep mom, dad and oma where they are for another ten year period. Then Diane and I visited the grave, spruced it up a bit and took some photos.
June 24 - Rotterdam
We arrived at Meredith’s in the late afternoon. Their apartment is located in the heart of Rotterdam. As Elliot was still at school (he’s pursuing an MBA degree at Erasmus University), Meredith gave us a tour of the neighborhood. The central market, the St. Lawrence Cathedral, bars, restaurants, the historic harbor area, the Maas River, the architecturally interesting cube apartment complex and much more is all within walking distance from Meredith‘s place. 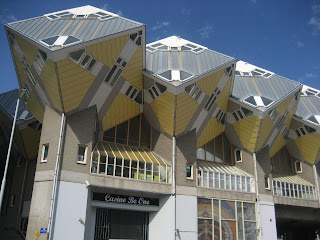 There were lots of bicyclists roaming the city streets. Here, however, bicyclists have their own dedicated paths that run adjacent to city streets. All these people on bikes and yet none wear helmets. Men in their suits riding to the office, mothers with toddlers in backseats and front seats (or sometimes on cargo bikes called a Bakfiets - check them out here http://bakfiets.nl/eng/
On one of the evenings, we went out to dinner at a small Italian restaurant where one of Meredith’s neighbors is a chef. We had not expected any special treatment. But it soon became evident as we were served the antipasto, that this was not going to be your average meal. We were served a huge plate of tasty, sun dried tomatoes, olives, slices of roasted eggplant, pickled onions, several cheeses and Italian meats. After seeing how much food it was, we immediately asked them to cut back on the main courses we had ordered (which they obliged). It turned out to be a  splendid and delicious dinner and a wonderful evening. On the walk home, in spite of being pretty stuffed, we each managed to enjoy a scoop or two of ice cream at the local gelato hangout.

We made some fun day trips while in Rotterdam. One was to the historical city of Delft, where the Delft blue porcelain originated and to the village of Kinderdijk. Although the weather was a bit wet, Delft was charming. With its canals, cathedrals, quaint bridges, a lively market and a picturesque town square, Delft is always a worthy visit. We sat in the town square, enjoying the scenery and had a cup of coffee - or was it a beer. 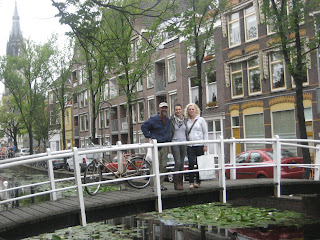 Kinderdijk is a short drive from Rotterdam. With its rows of quintessential Dutch  windmills along canals, we strolled passed them and took in the lovely scenery. It’s a popular tourist attraction, so we weren’t the only ones with that idea - lots of others walked and bicycled along the trail to enjoy the sights of the windmills. 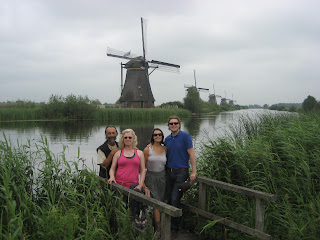 Meredith had made an appointment in Utrecht at a bridal store to try on some wedding gowns. So on one of the days, with her friend Anel, the four of us drove there. Utrecht turned out to be a very pleasant city. With a deep canal running through it, Utrecht has a comfortable feel to it with restaurants, museums, sidewalk cafes, bars and shops. The canals in Utrecht have a lower level right next to the water where there are bars and small, private weekend retreats right next to the water. It seemed pretty unique. 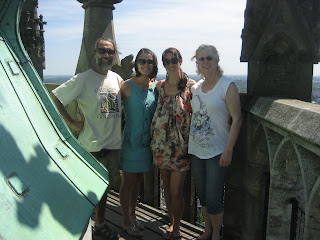 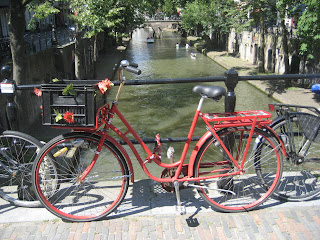 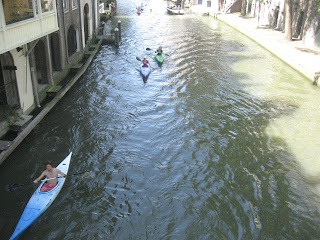 Being that it was a warm day, there were plenty of people making use of the canal by canoeing and kayaking on it. Others were taking canal cruises on larger boats that provided lunch while further on, some brave kids were jumping in the murky water from their inflatable rafts.
After lunching on crokets, dark bread and aged cheese, we took a tour of St. Martin’s cathedral. Started as a small chapel in the 7th century, the building that stands today is of Gothic-design. There is a tall tower, the transept and the choir. In between the tower and the choir there’s a gap in the cathedral where a hurricane blew building apart. The only part open to us was the tower, which we proceeded to climb - all 465 steps of it. Great view from the top, though.
After a couple of more enjoyable days in Rotterdam with Meredith and Elliot, it was time for Diane and I to go home. Our flight was from Brussels. Since Meredith wanted to peruse through the second-hand market in Brussels for old keys, she and Anel accompanied us back to Brussels.
Only about a two hour drive, we dropped off the car and took the train into the city. We were at the Place du Jeu de Balle market in no time and soon were bargaining with a vendor for his stash of old keys. We were surprised to fin out that he wanted far more for his keys than an antique shop owner wanted down the street on Rue Blaes. So we headed back to the huge store and proceeded to buy his entire supply of old keys. The store, Stephantiek is the largest antique store I have seen. Check out the store at their web site - http://www.stefantiek.com/
The four of us had lunch at a sidewalk café, near the Grand Place. Afterwards, we walked around the famous square while Meredith provided us with a few of its historical nuances. It was then time for Meredith and Anel to go to the train station and catch the train back to Rotterdam. Like we had done so many times before, we hugged each other tightly, this time parting in the middle of the Grand Place square in Brussels.
With flight delays and route re-scheduling, the trip back home was a long one. But we got home safe and sound after a 27 hour trip. Another adventure had come to a close.
Posted by George at 6:23 PM 1 comment: