After a long flight from NY, we landed in Istanbul - only to walk over to the domestic terminal and board yet another plane for a one hour flight to Izmir.

We met up with Jill and Rich, our friends from Hawaii. Rich was here for his 50 year high school reunion. They had arrived several days earlier, scouted out the city and found our hotel and rented a car. That simplified matters a lot.

In the morning, we drove out of Izmir towards the city of Selcuk but stopped along the way at the quaint and hillside village of Sirince, a place well known for its quaintness and fruit wines. We sampled various wines, mostly all mediocre to awful and felt compelled to purchase a couple of bottles of their dry, low-alcohol wines. 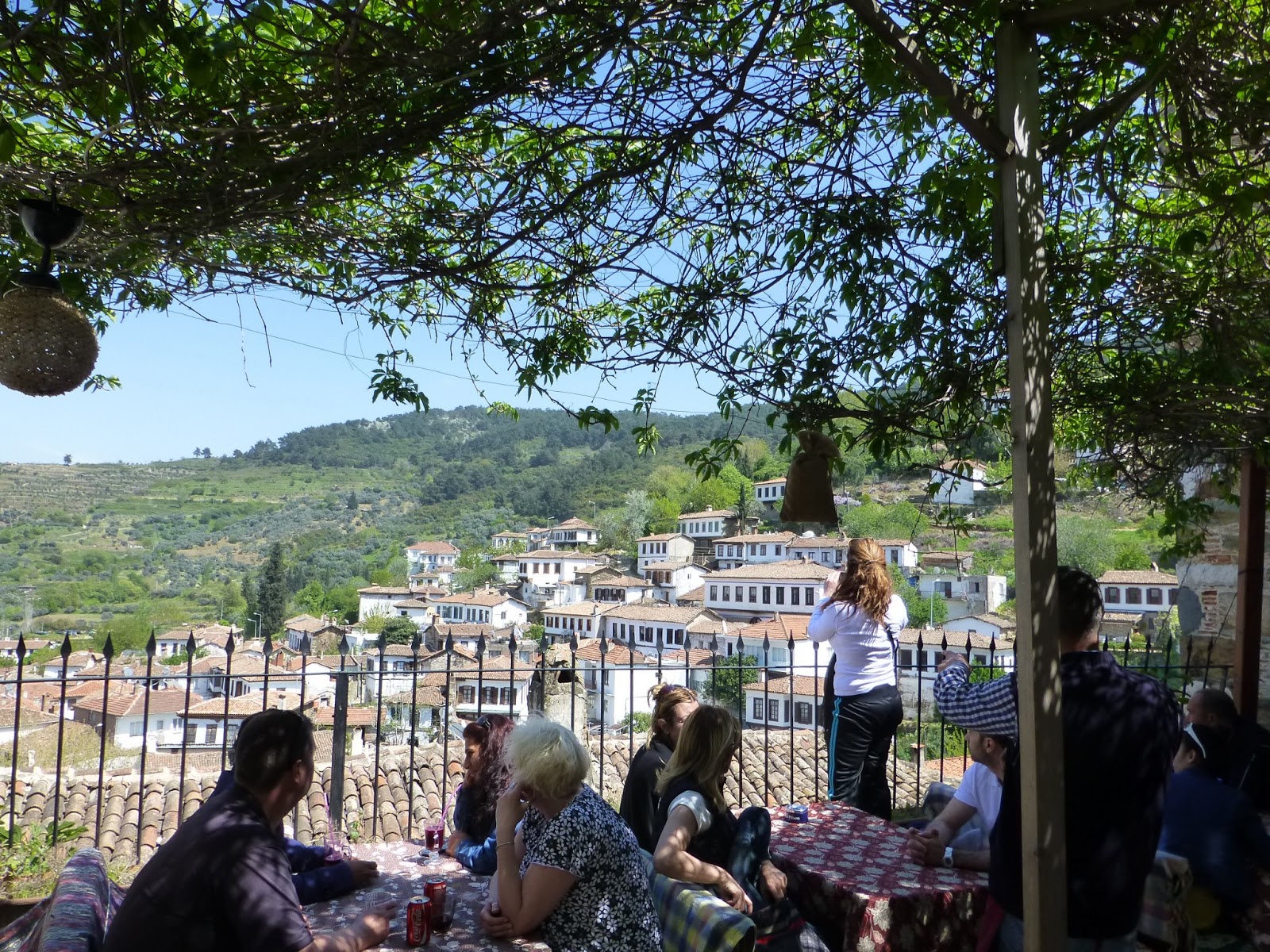 In Selcuk, we ended up staying at a very nice pension with the odd name of “Boomerang”. It was in the heart of town, very friendly folks running it, and was the gateway to our morning’s destination - Ephesus.

After a breakfast of bread, cheese, tomato, cucumber and a hard boiled egg (with coffee), we headed off to Ephesus. No sooner had we driven into the parking lot, when a friendly fellow offered us a free ride to the top of Ephesus, if we would stop in to see a government run carpet cooperative. We agreed.

It was an hour-long detour, but we learned lots of things about the art of carpet making that we had no idea of before. And the sales pitch was a very soft one. Soon, we were back on track and delivered at the top end of Ephesus, so that we only had to walk one way - downward to where our car was parked.

Ephesus is huge. Beginning from nearly 300 B.C. Ephesus was a vibrant city for many centuries even after a major earthquake occurred in 270 A,D. There are theaters, basilicas, lavish housing for elite Romans, fountains, squares, baths, gymnasiums, sports arenas, frescos, temples and lots of statues. But one has to fill in the void with some imagination to appreciate the grandeur of it all - particularly when you consider how long ago people walked along these streets. Really, the elite folks who were privileged to live here, even had running hot and cold water, with latrines that washed away their crap! Not bad for a couple of millenniums ago. 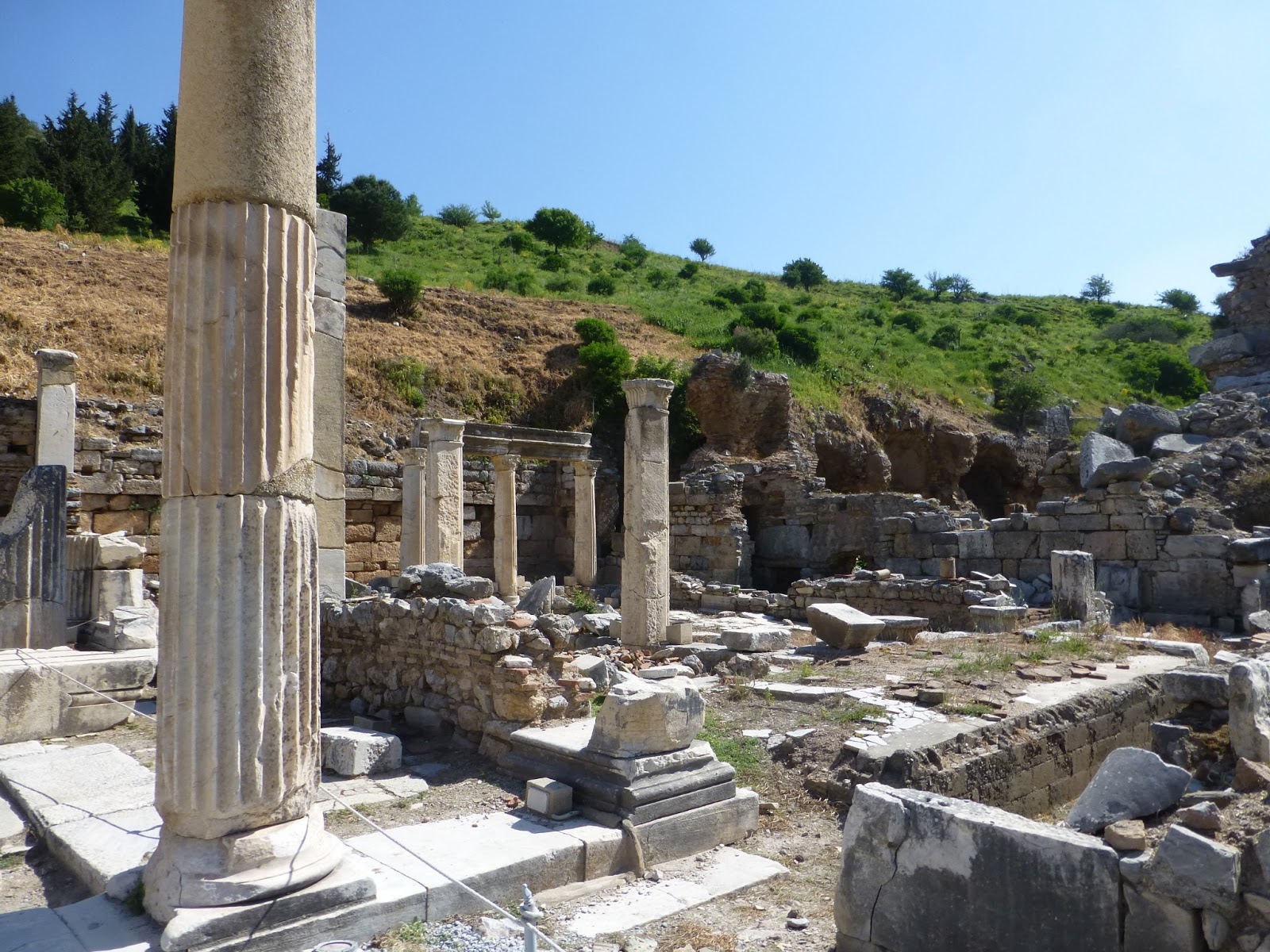 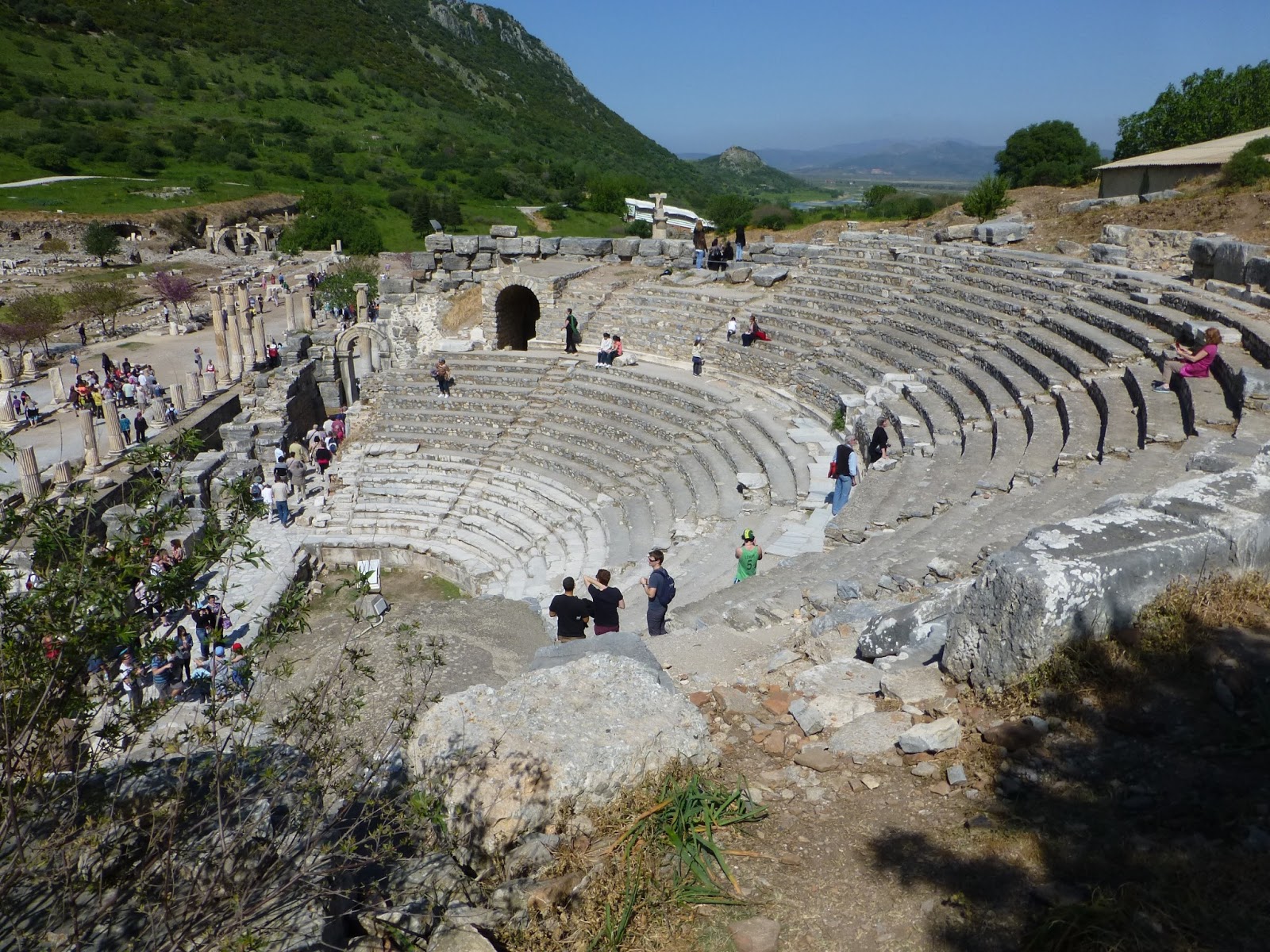 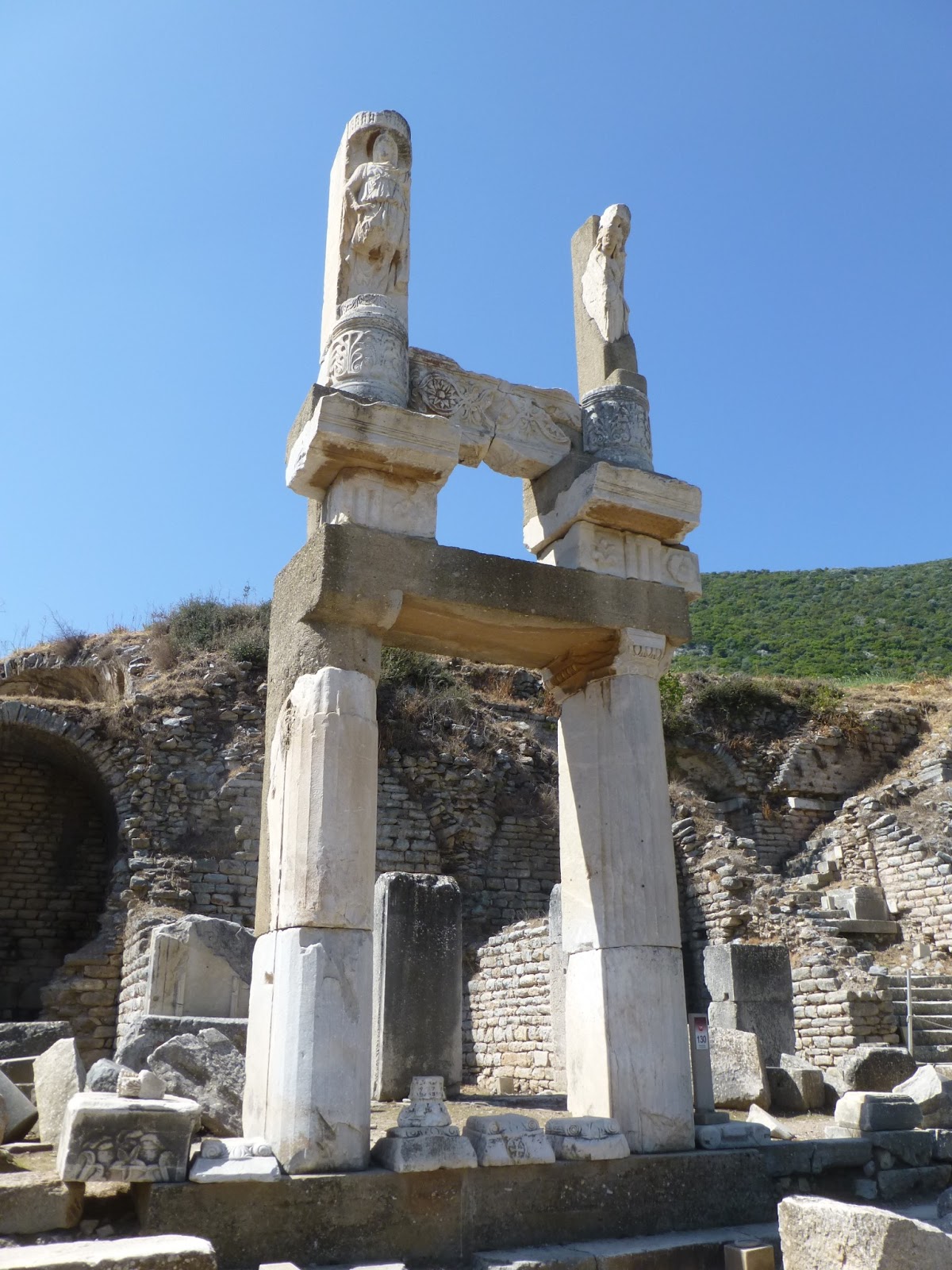 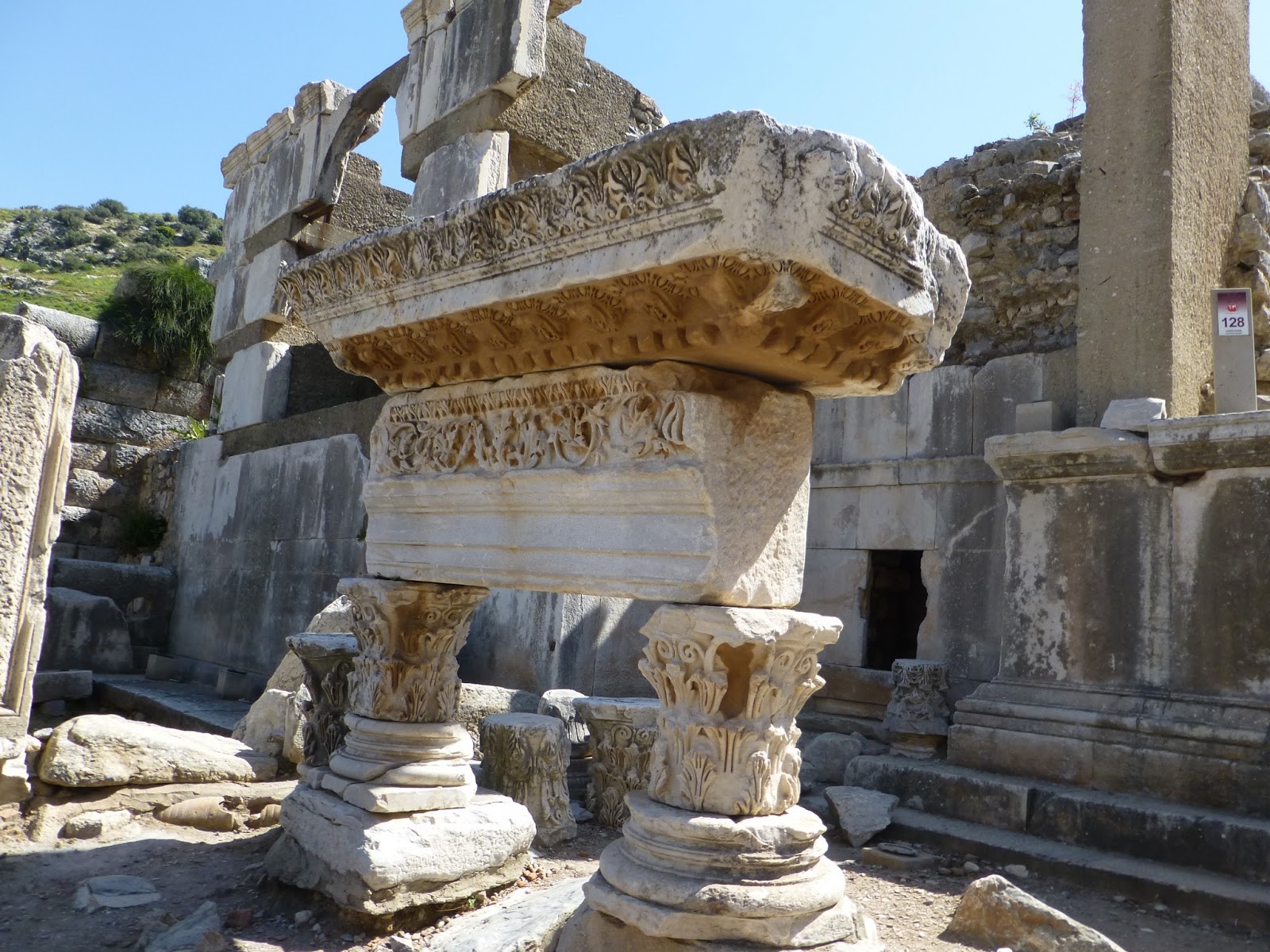 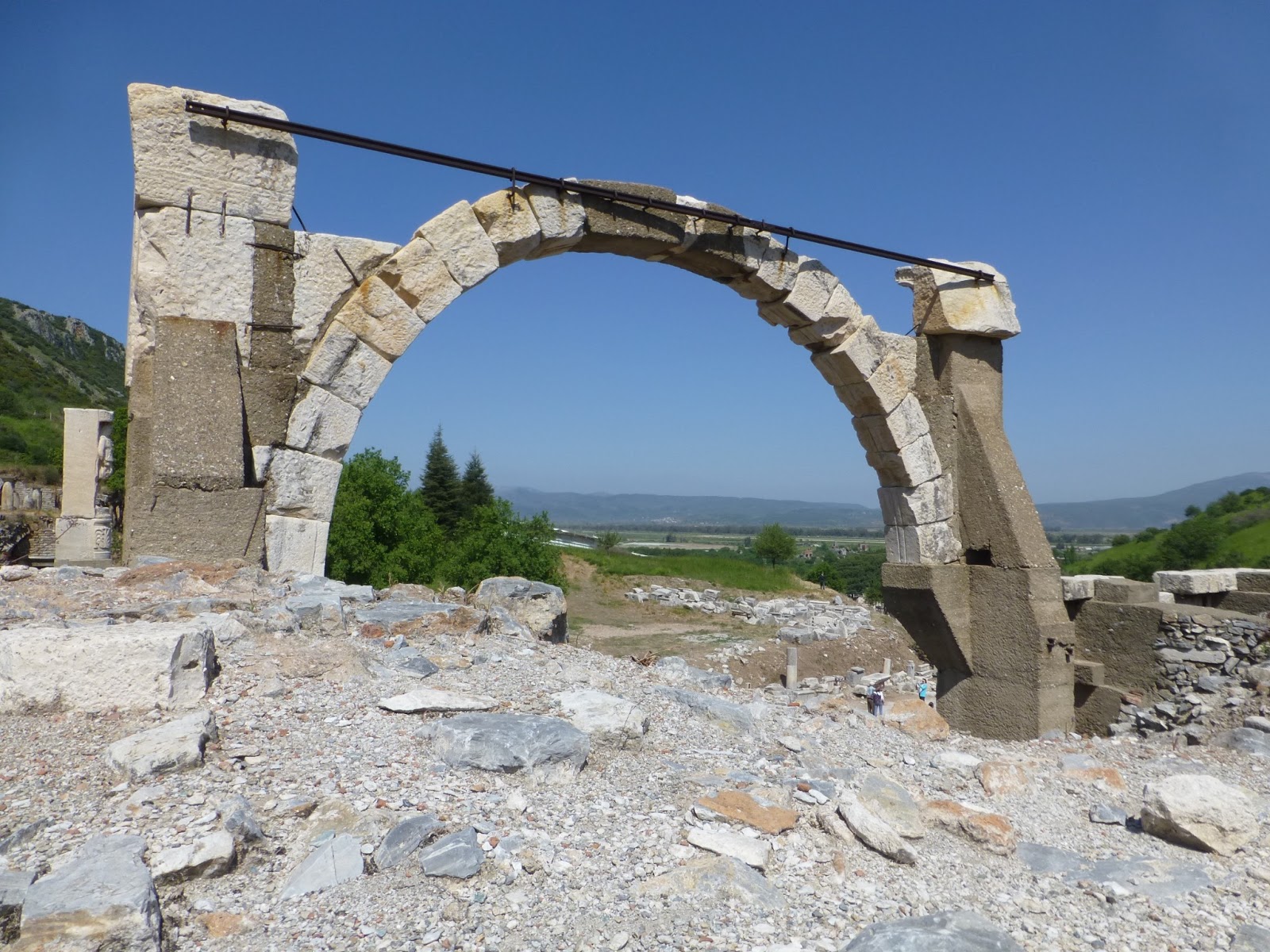 After our tour, we were off for a three hour drive to Pamukkale, a place known for its thermal pools and pure white hills covered with calcium deposits.

My expectations for Pamukkale were rather simple - walk around a group of pools composed of calcium deposits and warm springs. It turns out that there was far more to it that just that. Our hotel host was kind enough to drive us to the top part of the hill and drop us off at one of the entrances. What was most surprising was to see the impressive ruins of Hierapolis - and in a far less crowded condition than Ephesus. In many respects, I actually preferred Hierapolis to Ephesus.

Hierapolis lies along beautiful foothills lined with red poppies, yellow mustard flowers and other wild flowers. At one end of the ruin there is a spa pool that we took advantage of for a few hours. Afterwards the relaxing setting, we began the descent of the bowl-shaped travertine dome with the multi-layered pools.

The bright white reflective light was hard on the eyes even with sunglasses on. But the pools were magnificent. The walk downward had to be done barefooted to preserve the travertine.

Once at the bottom, we walked back to the hotel, packed the car and headed south to Dalyan, about a three hour drive. 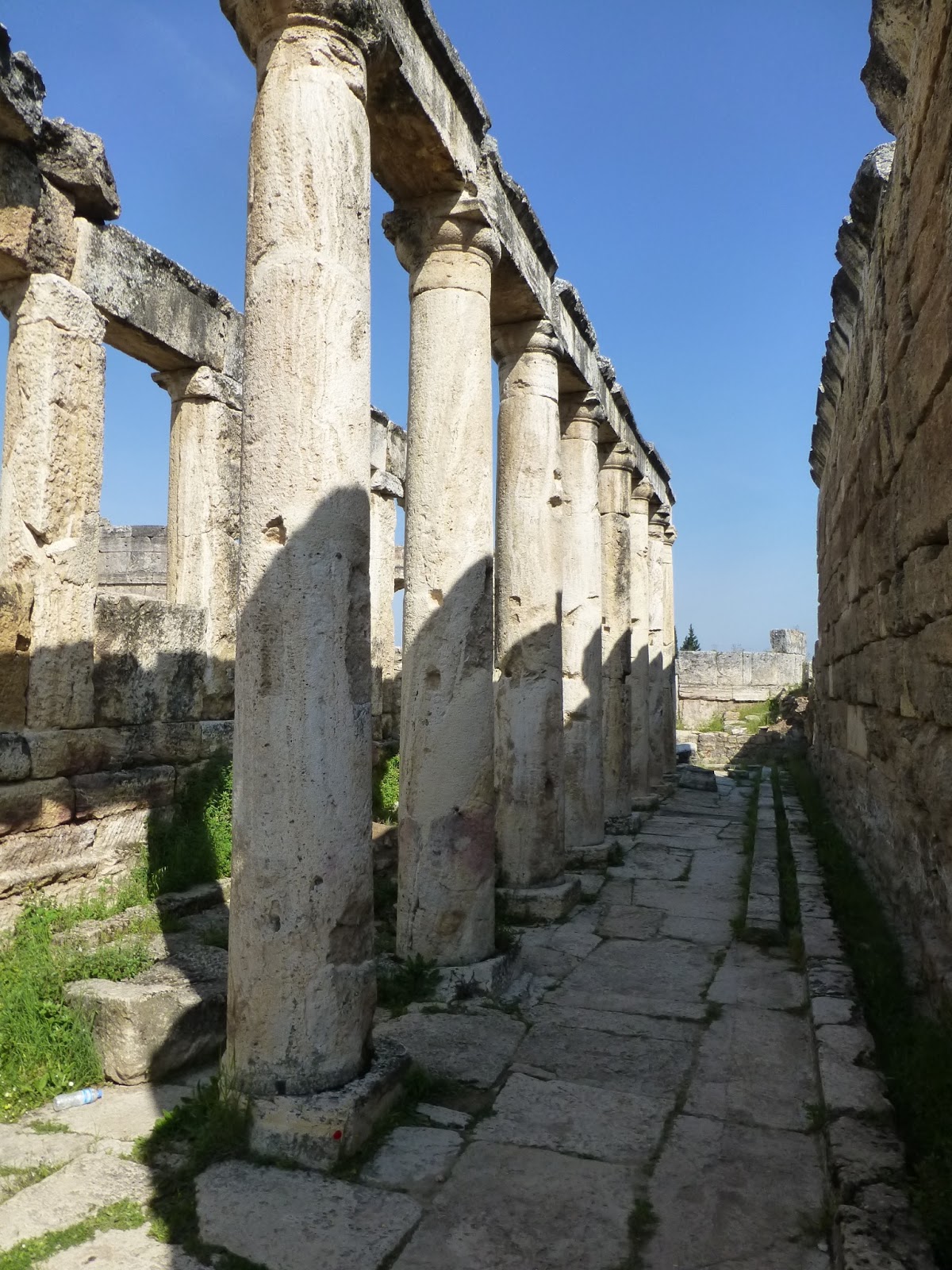 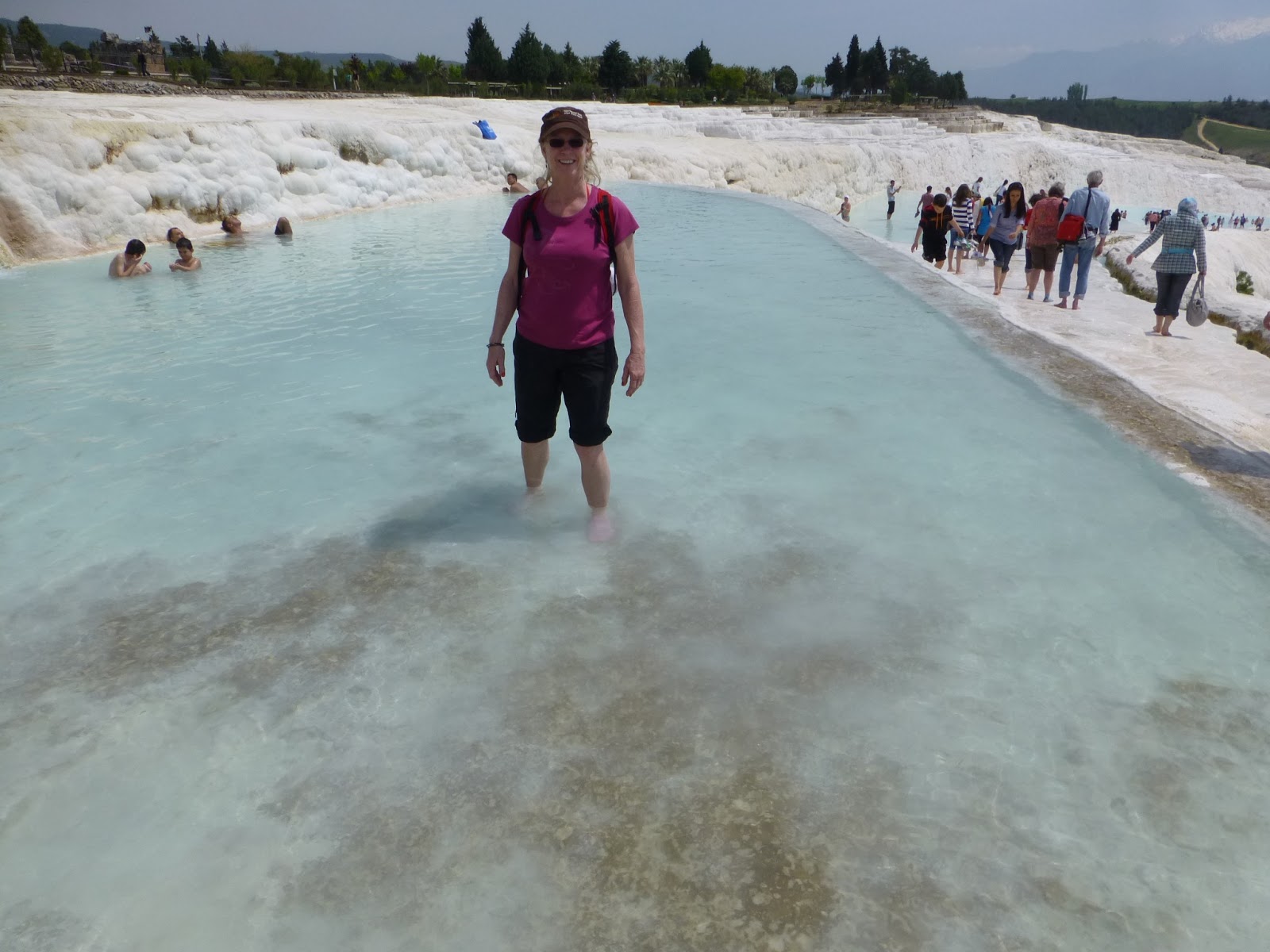 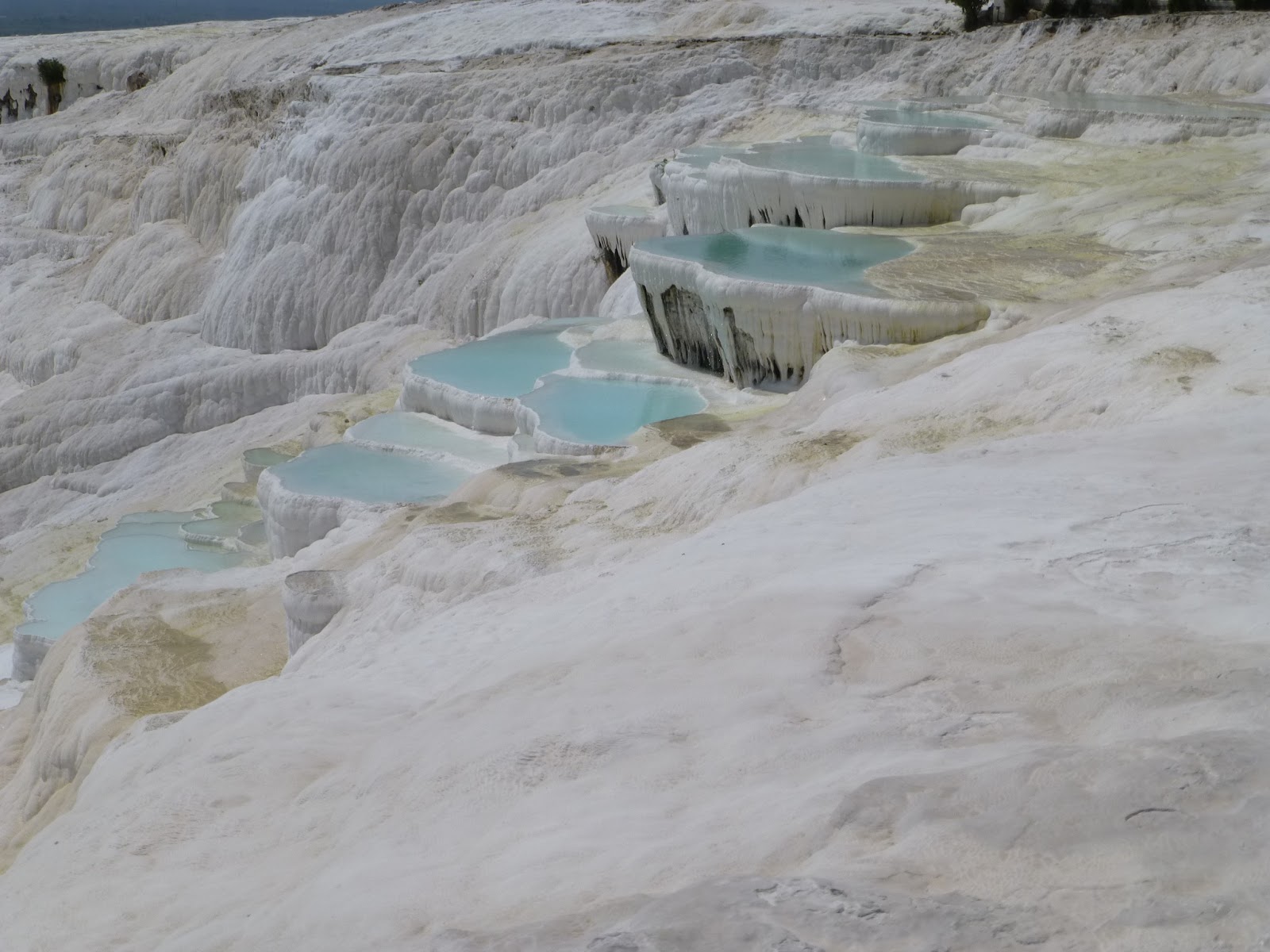 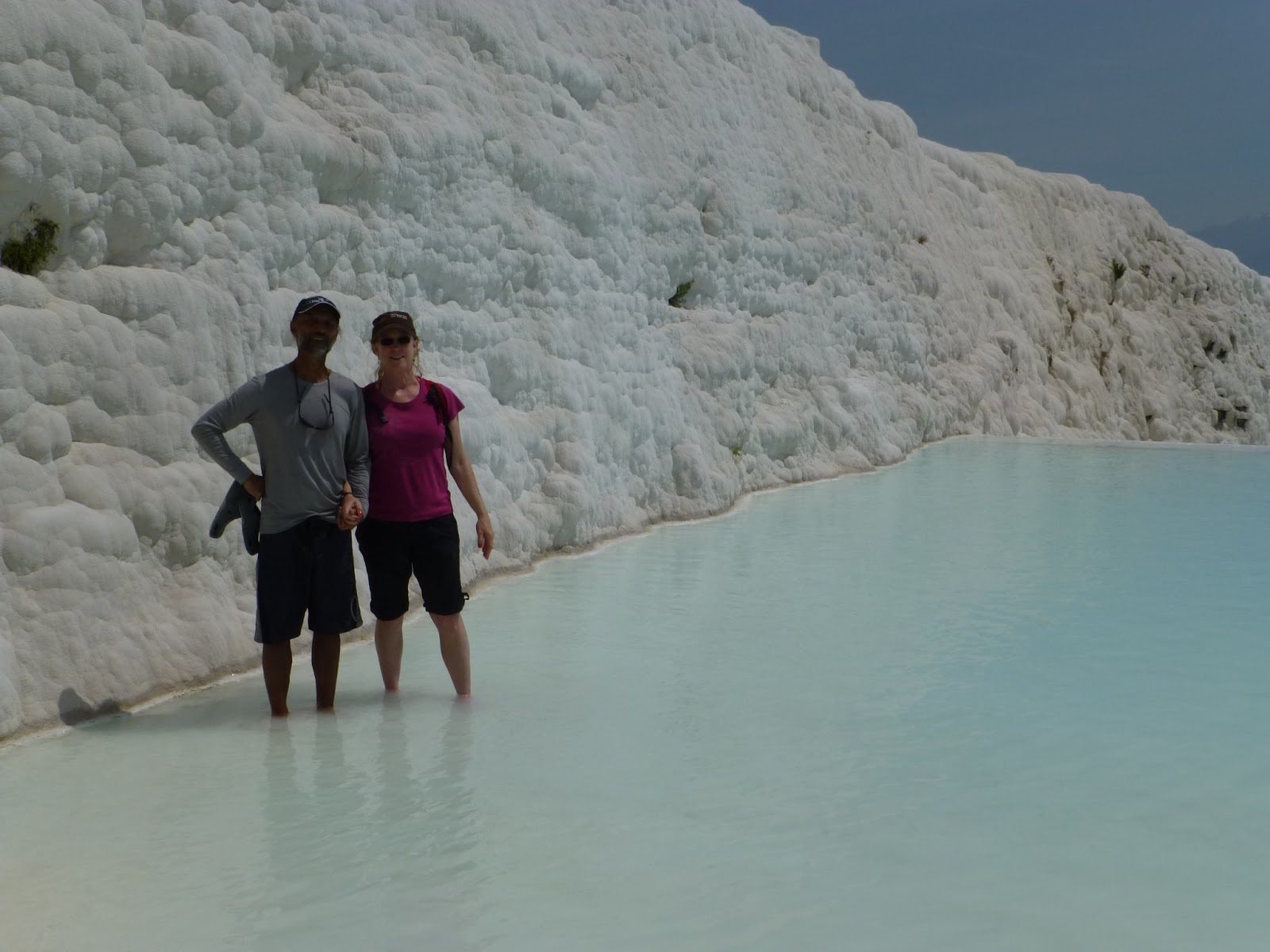 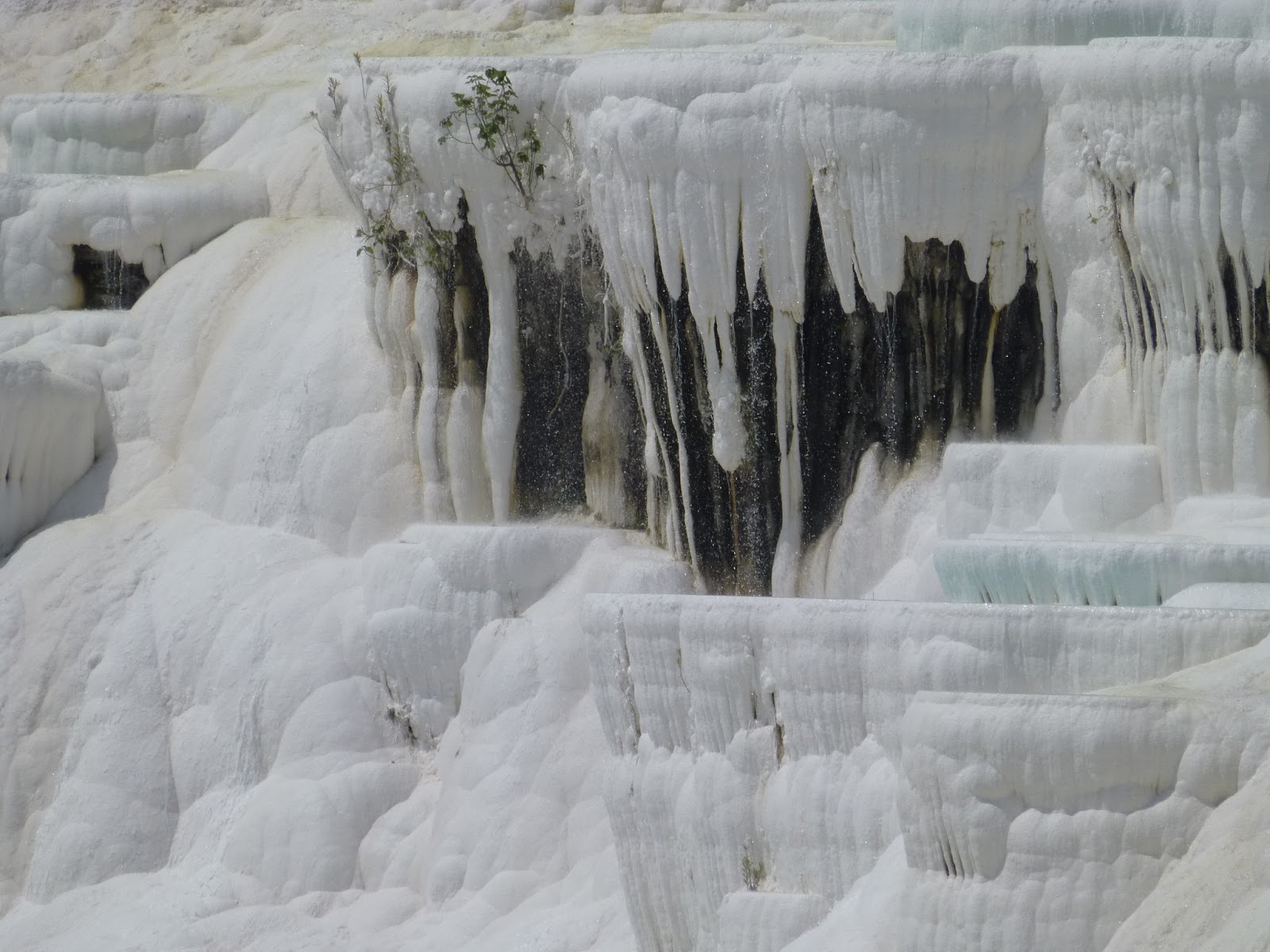