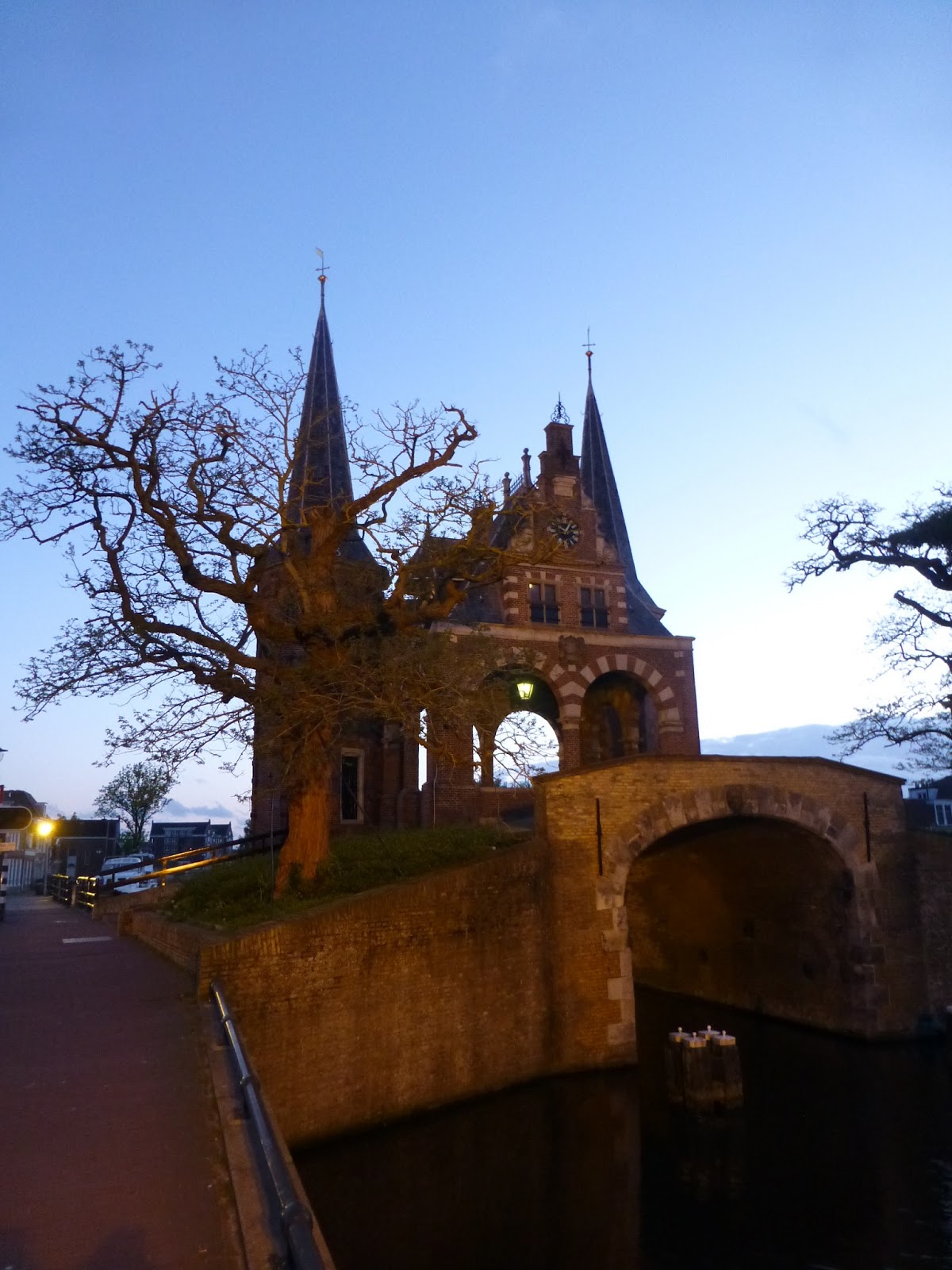 In the morning, we took a drive to one of the nearby lakes. About ten minutes away, Sneekermeer (Lake Sneek) generally is full of sailboats plying the waters back and forth. But today, with this kind of blustery weather, even the Dutch tourists stay home. There are a few private yachts out sailing, but everything else looks closed. I did spot saw a beautifully retrofitted canal boat for sale. It was more than I could afford. We proceeded to return to Sneek.

There isn’t a whole lot to do back in Sneek when it’s rainy and cold. Diane decided to stay in and give her foot a break and catch up on email and work. Maarten and I decided to visit the much touted model railroad museum of Sneek.


The museum is located at the town’s railway station and is quite provincial. We and a few others got a tour from an old railroad buff, who gave us a good history of the railroad in the Netherlands and in Sneek while pointing out miniature trains in a display cabinet. Upstairs there were some elaborate train displays where trains chug around miniature mountains, towns and so forth. After all, it was entertaining.

We walked around the village stopping by to appreciate the architecture of the Sneek Theater with oddly-shaped windows. It lies along a small canal with weeping willow trees that have a pleasant effect on the entire scene.


We then proceeded to the town’s historical water tower that was built in 1908 and afterwards walked through the Waterppoort Tower (Watergate Tower). This tower is the only part left of an old defensive wall that ran the circumference of Sneek. It allowed boats to enter the canal leading into the town’s center. We watched the draw bridge next to the Waterpport open for a boat to pass through. 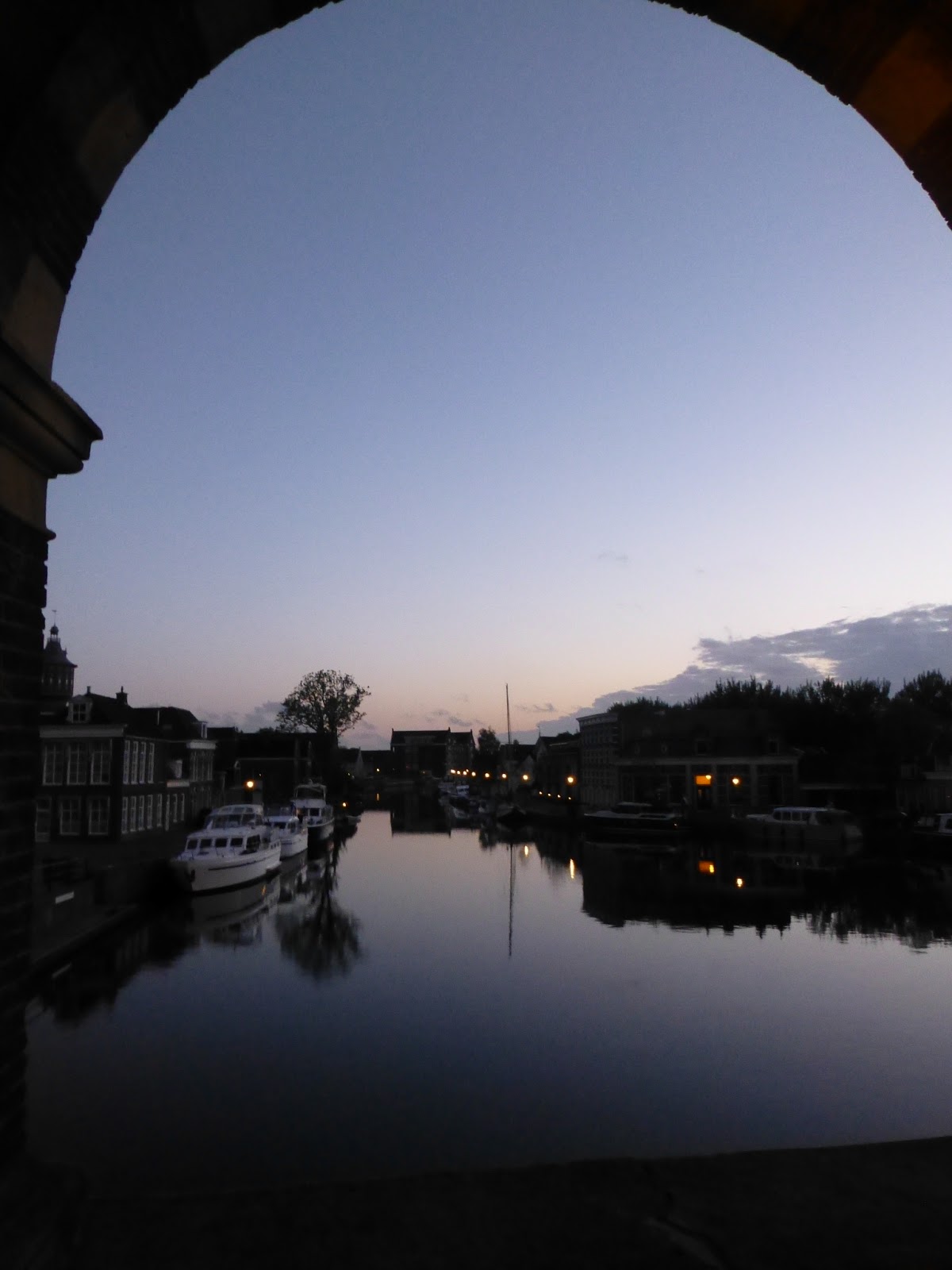 On Thursday, we went to the local maritime museum - the Fries Scheepvaart Museum. It turned out to be much more than just a maritime museum. Of course, there were model ships, boats, ship building, fishery displays and other things related to the maritime industry. But there were displays on period lifestyles, ceramics and a number of other items relevant to life in the 19th century in Sneek. We really enjoyed it.


After a light lunch back at our B&B we walked to the oldest gin producer in Sneek, Weduwe Joustra (Widow Joustra). The entry gives way to a comfortably arranged shop with wine casks, wine bottles on wooden shelves and Dutch gin (genever) displayed.


No sooner had we walked in when the shopkeeper asked us if we wanted to taste genever, to which we responded - YES! She pointed us up the narrow stairwell. Once there, we were surrounded by bottles of gin, sampling glasses and no host. The idea was to sample anything you wanted on your own. It became obvious to me that alcoholics had not discovered this little gem of a place! 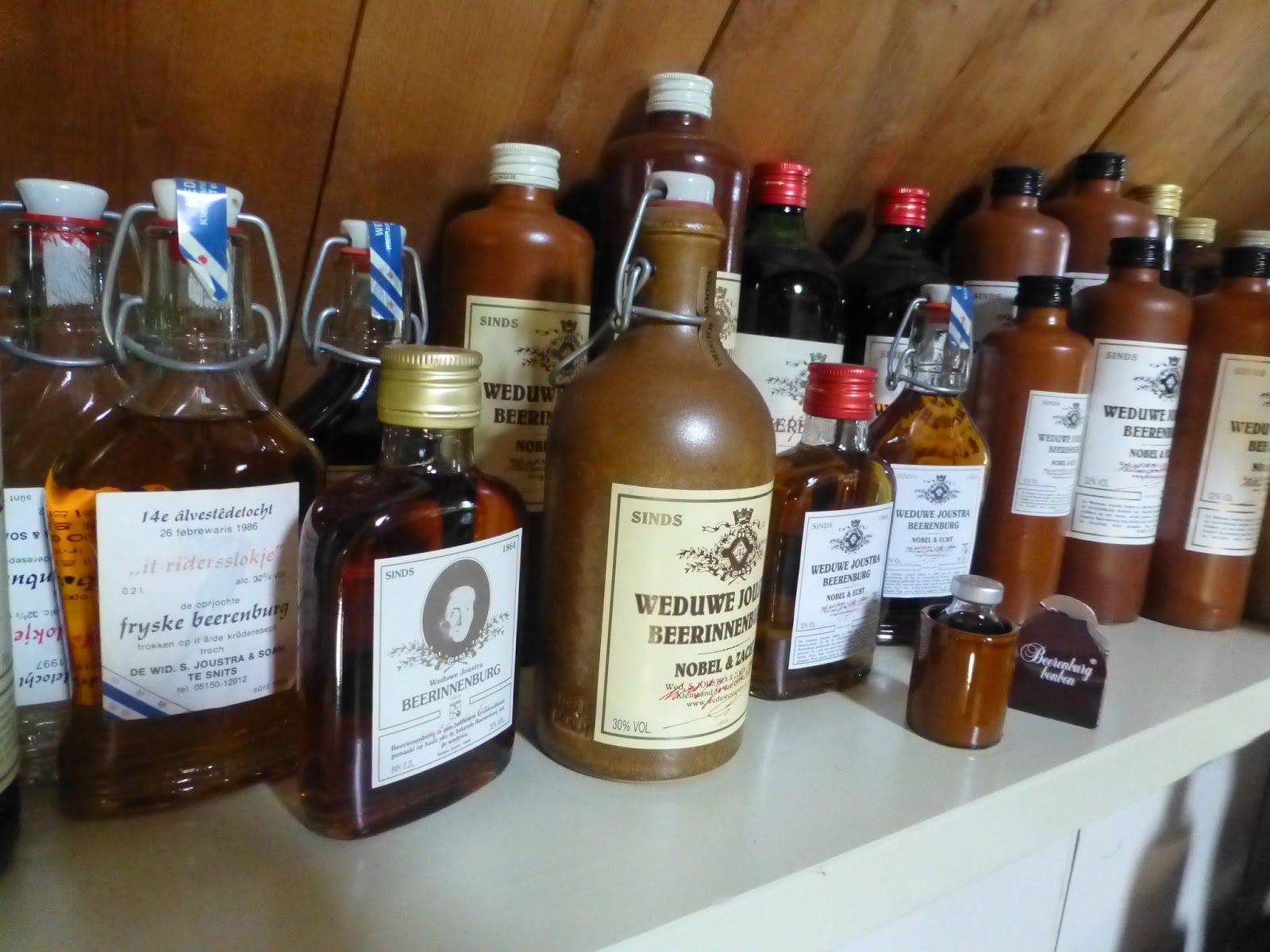 Needless to say, we had a fun sampling and tasting all the varieties of gins and then decided on our purchases. Definitely a worthwhile visit.


On our last day of our Friesland adventure we veered west to Workum, where Maarten had suggested going to an art museum by a Dutch contemporary painter - Jopie Huisman. Not only was the village quaint, but the work by Huisman was unusually good. Huisman went through various stages in his artistic career, including dealing with the consequences of WWII. At times he seemed to have a lot of fun with his paintings, but usually he chose more serious subjects from everyday life, often objects such as shoes, a coat or a hanging pair of pants. He also did various self-portraits that were very interesting. 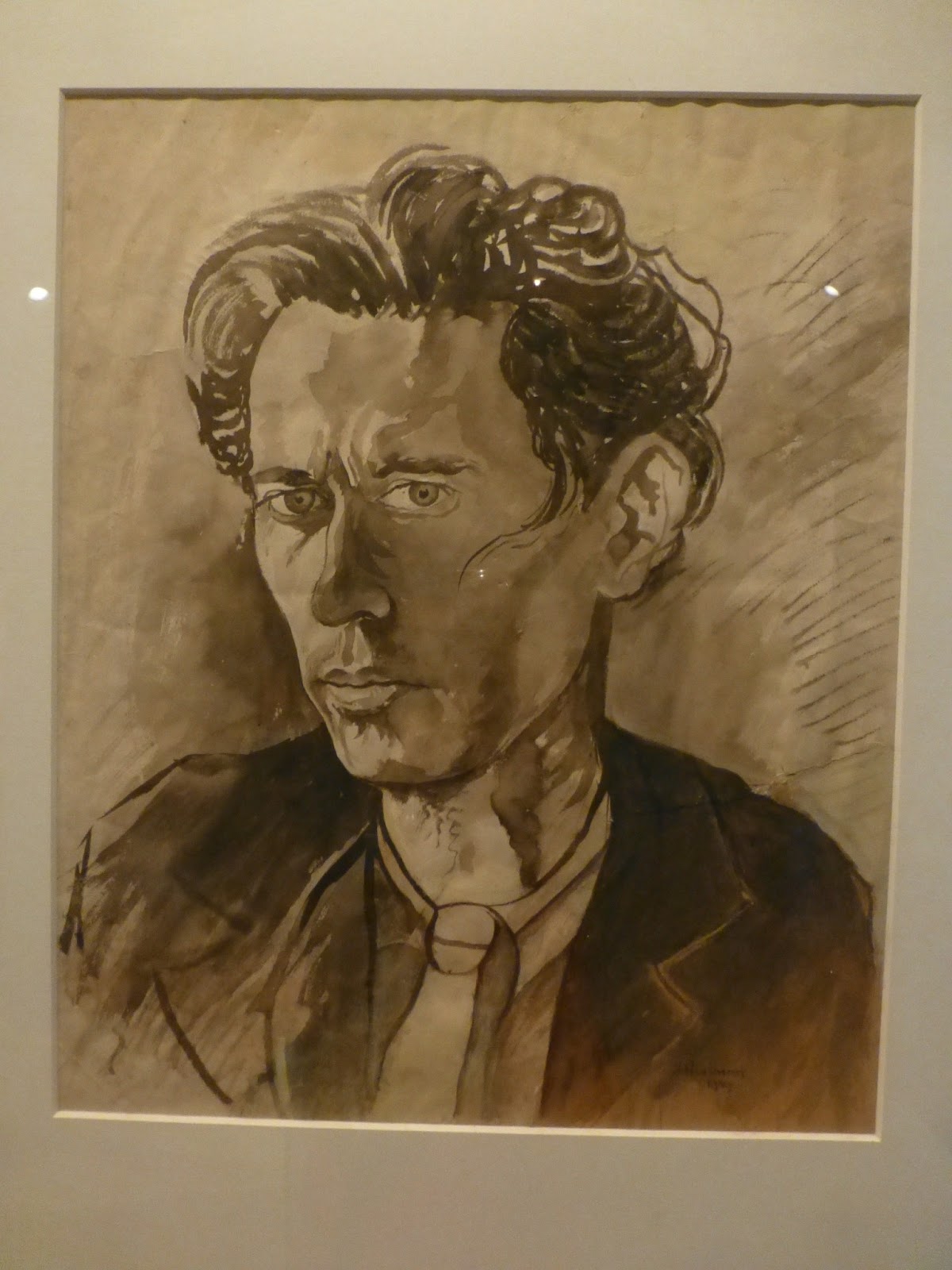 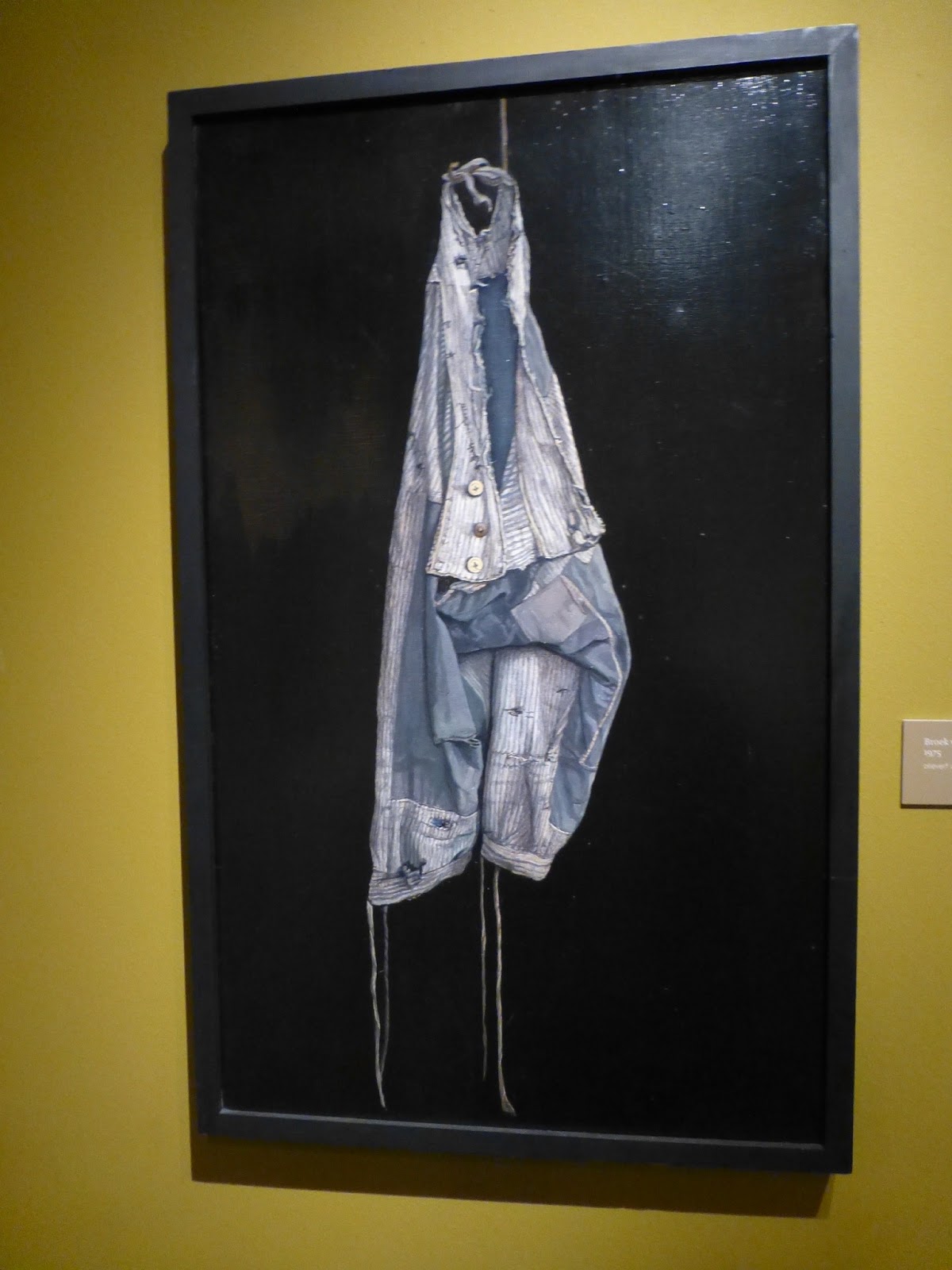 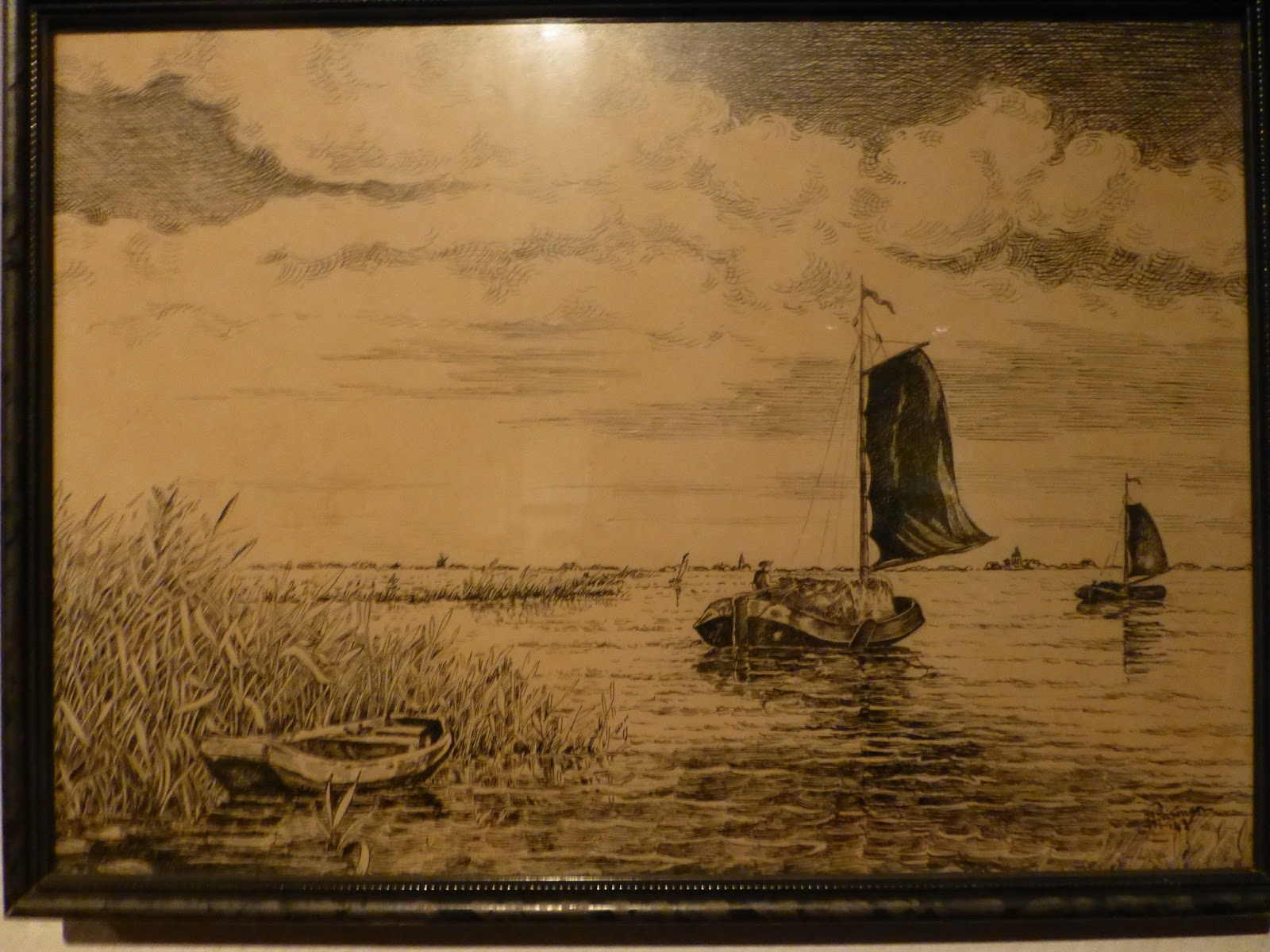 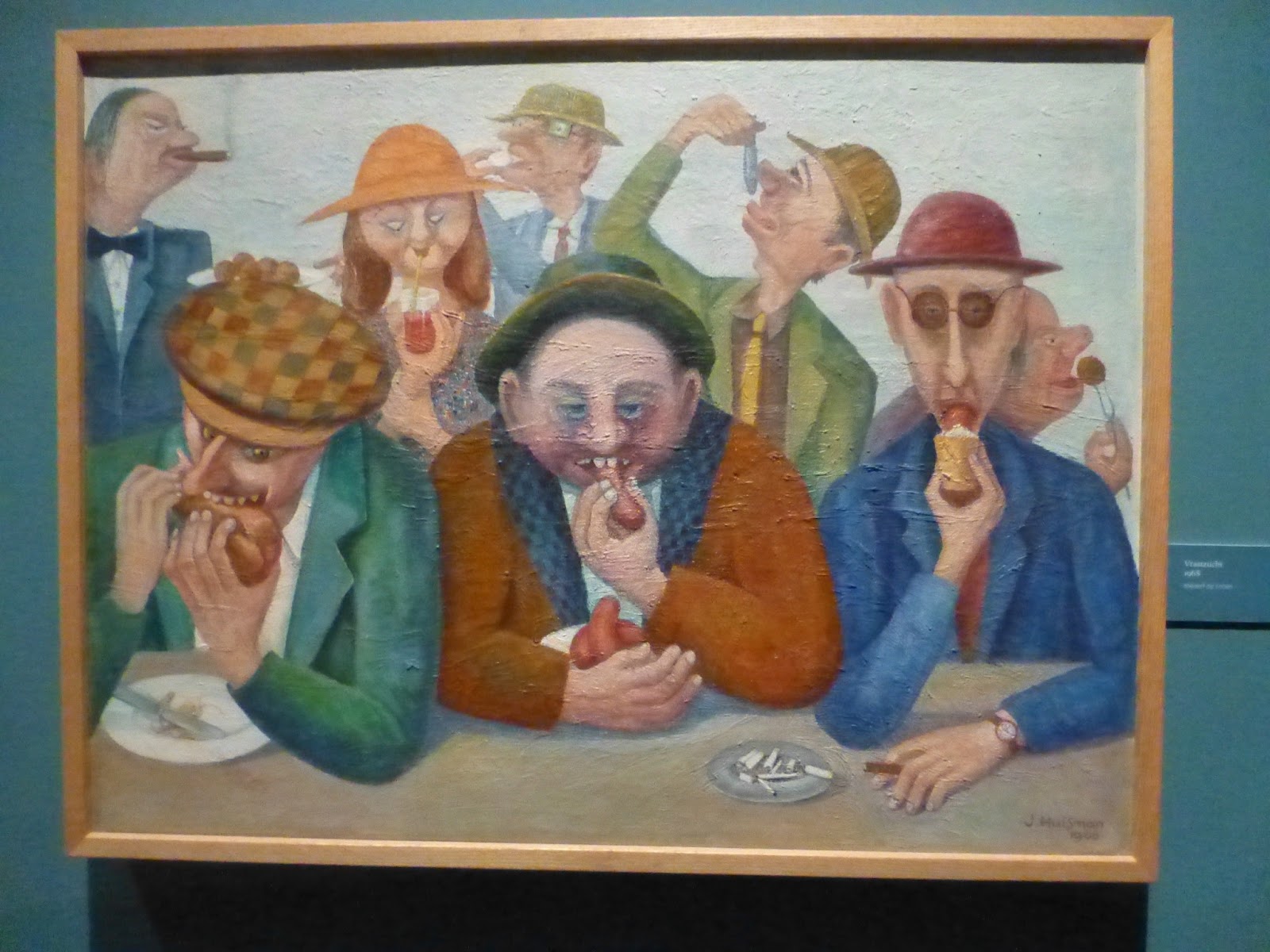 We drove through a couple of other villages, including the fishing village of Makkum and then headed over to the 30 km dyke to cross over to the western part of the Netherlands.

Our last stop was Medemblik, a small town dating back to the 1200’s with a leaning tower and a castle. The town has quite a history of warfare and strikes by pirates. Eventually, to better protect themselves, the citizens built a wall around the city. 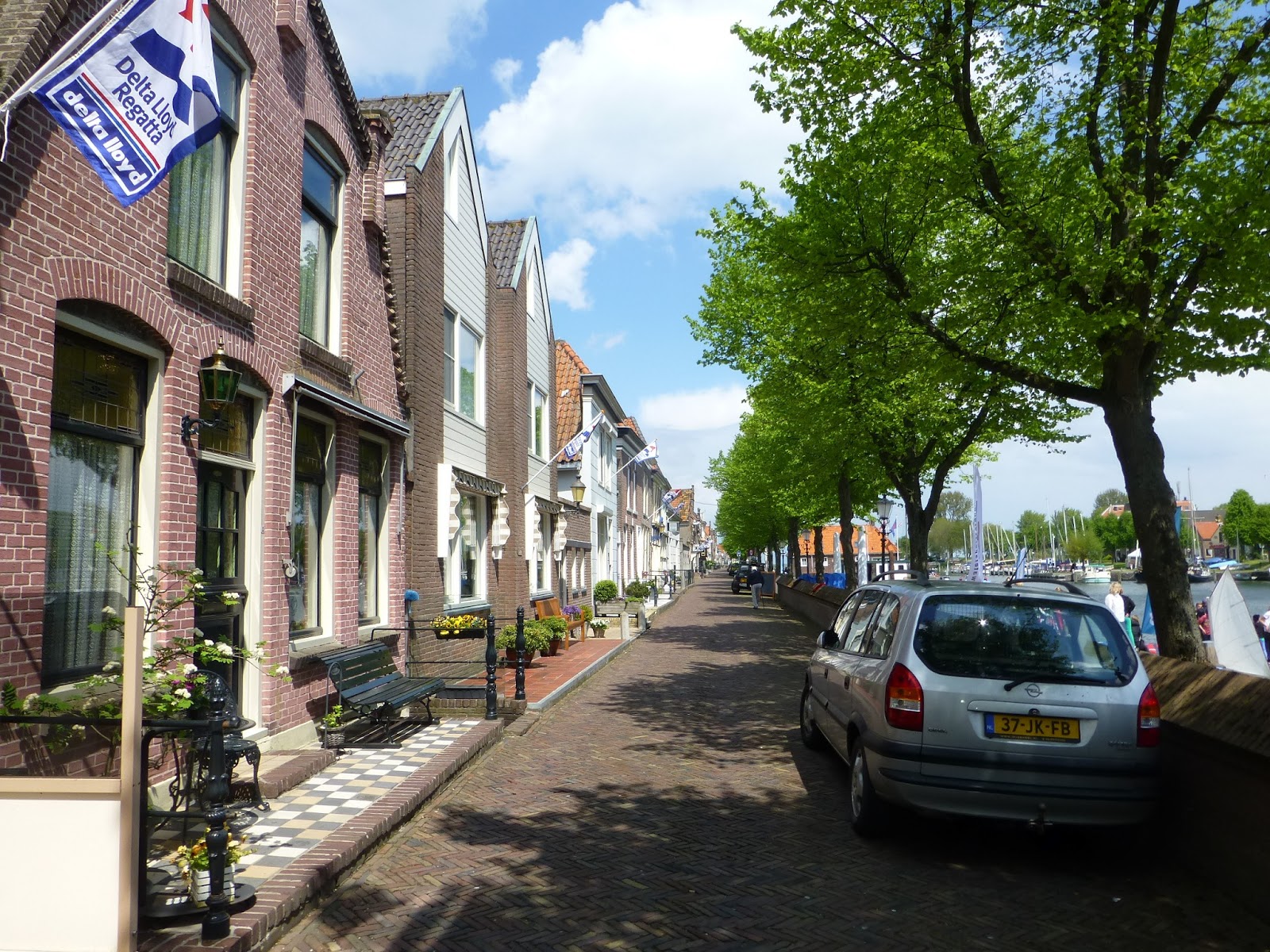 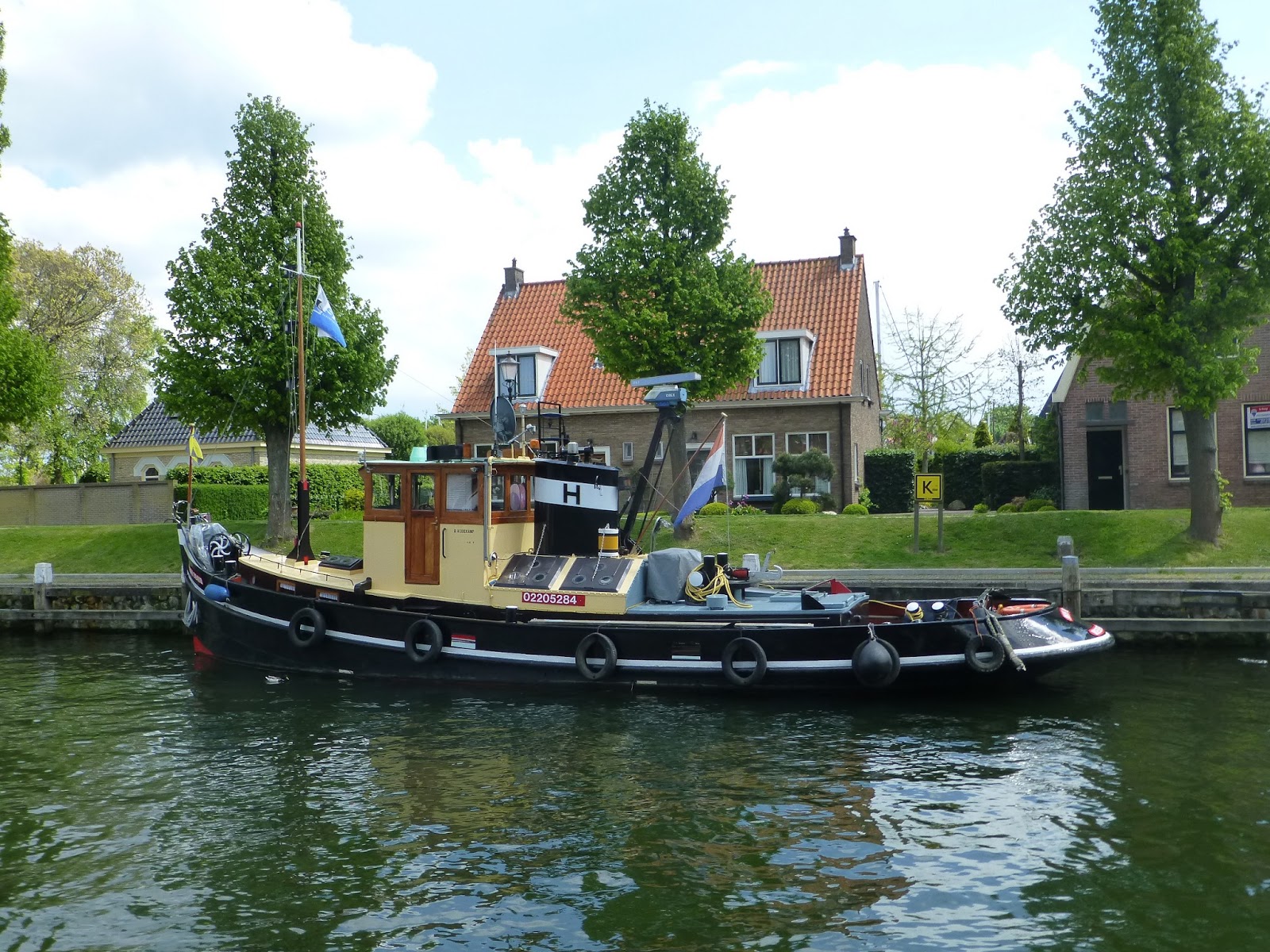 Today it is a tranquil seaside community with lots of yachts. We took a long walk, watched elementary school kids practicing sailing and kayaking and did a little shopping along the way. We headed back to Purmerend when it started to rain.

Posted by George at 1:31 PM No comments:

On Monday morning, after breakfast we drove to a WWII era concentration camp where the Germans and the Dutch held Jews in WWII before they were sent off to the concentration camps elsewhere. It was called Westerbork Transit Camp. It was from this camp that over 100,000 Dutch Jews were deported and later slaughtered with the collaboration of the Dutch citizenry. In fact, it is from this camp that Anne Frank was sent to her death in Auschwitz.

Like most of the memorials dedicated to the Holocaust, it’s an overwhelming experience to walk the immense grounds and try to imagine what it must have been like to be confined in that environment, not knowing what's going to happen to you and your loved ones. It’s a very chilling and sobering feeling.

Afterwards we drove to an area south of Groningen where there are ancient megaliths known as the Hunebedden that are over 5000 years old. Built of huge granite stones (some weighing over 50,000 pounds), they were moved to form rectangular stone burial sites. We visited only one of the sites, but there are a number of them spread out in this area of the Netherlands (and only this area) where otherwise, no boulders of any type exist. In fact, Maarten told us that The Netherlands doesn’t have any boulders in its landscape. 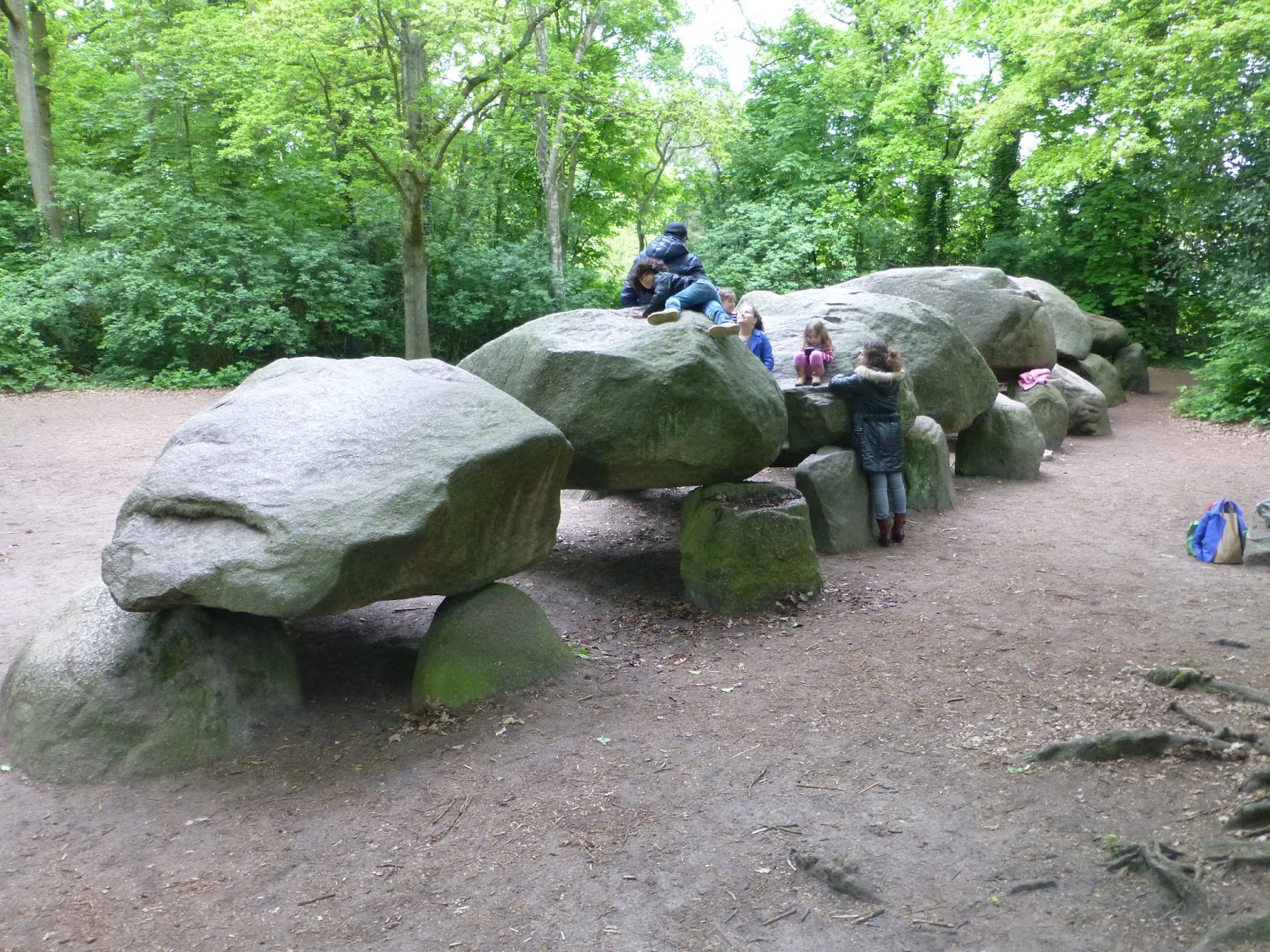 From the Hunebedden, we drove to the city of Groningen, a classical old city surrounded by a moat. One of the most distinct buildings in Groningen is the Tower of Martini. In the 15-16th century, it had been the tallest building in Europe. Unfortunately for us, today the town's square was being used to host a huge carnival, detracting from the surrounding area.


Otherwise, today Groningen mostly is known as a quaint university town with a mote and an impressive art museum. It is the largest city in the northern part of the Netherlands.

In the morning, we headed onward to Sneek (pronounced “snake”), a place known for its canals and proximity to many lakes. Along the way, we stopped at the small Friesland village of Poppenwier. It was very small, lush green, quaint and scenic. With only 184 inhabitants, it was easy to walk it from one end and back in a few minutes. We paused at the church, where there is a small memorial to twenty American WWII airmen who perished on December 16, 1943 to free the area.


We drove onward to a nearby eatery, the Blaue Tent (the Blue Tent), which is known to have really good pea soup. Unfortunately, pea soup was only served in the winter time. Onward we went - to Hindeloopen, a village recognized for its decorative painting style that they do on furniture and other types of objects.


By the time we arrived in Hindeloopen it was cold and beginning to rain. Things were pretty much closed and quiet. We took a brief and wet walk around town, checked out the museum (which was closed), and decided to pack it in. We drove to Sneek just a few miles down the road where our B&B was waiting for us.

Posted by George at 1:51 AM No comments: 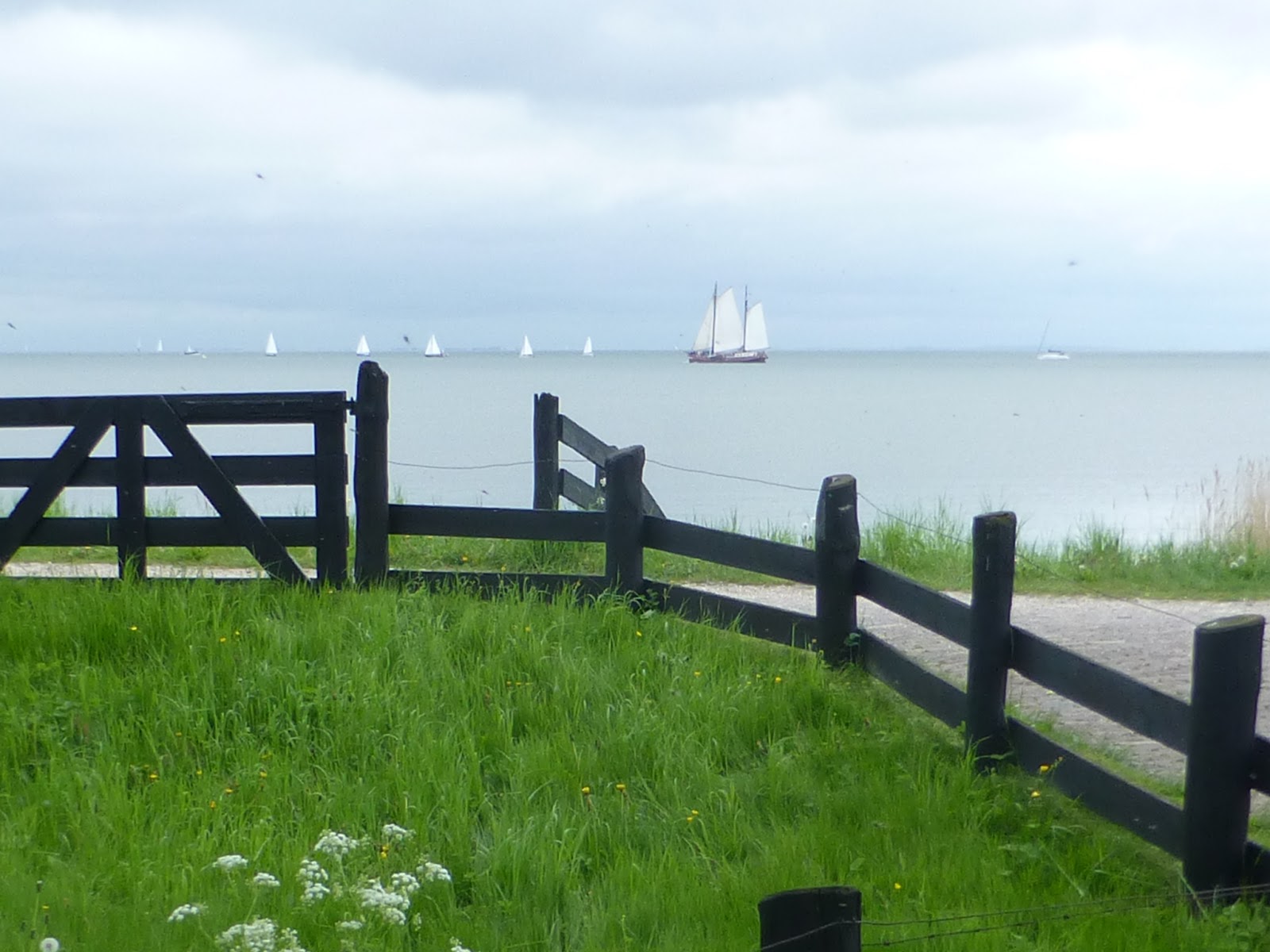 After a three hour flight on Turkish Air, we arrived in The Netherlands at Schiphol. Thankfully, our friend, Maarten, was there to pick us up - it was cold and rainy. Due to heavy, rush-hour traffic, it took us an hour to get to his home in Purmerend.

We took the following day just to relax and catch up, waiting until Saturday to begin our road trip through the north of the Netherlands. Our first stop was  Zuiderzee Open-air Museum in Enkhuizen, right along the waters of the Ijsselmeer. The Ijsselmeer used to be a salt water sea called the Zuiderzee, but years ago, the Dutch built a 32 km dam, drained out the salt water and made it into an enormous, yet shallow, fresh water lake.

The open air museum is fabulous. It is comprised of a replica of an old fishing village and an inside museum. The village consists of the typical houses and shops found in the 19th century such as a copper smith, a sail and rope maker, a boat builder, a fish smokehouse, a pharmacy and more.

What makes it special and unique is that there are volunteer villagers dressed up in the period clothes who you can talk as you stroll down the cobble streets,. Some of the women are busy with common household chores such as cooking, cleaning or sewing. At one of the houses we even were asked to join in for a light lunch along with a few other visitors.  She had prepared a dish that was commonly eaten - potatoes mixed with spinach and bacon. Savory and very tasty.


The displays of the old boats are excellent. There are fishing boats, an ice boat with a metal hull, a transport ship and an old Frisian hunting boat with a huge mounted musket and many others.

After finishing with the museum we drove another hour to Steenwijk, a sleepy village near to where we intended to rent a boat the following day. The inn was a very charming place that had been a iron smith’s store. On the bottom floor, a lot of it has been left in tact.

In the morning, breakfast was a feast of strawberries, orange juice, omelet, cheeses, cold cuts, yogurt, jams and  breads. Afterwards, we packed a lunch and drove to nearby Giethoorn, a village with few roads but lots of canals and a lake. The plan was to rent an old canal boat with a sail and a pole.

And that’s just what we did. We started out poling through the narrow canal, ducking under the bridges and making our way to the lake. After 30-40 minutes, we made it out to the lake, stepped the mast and put up the sail. Pretty soon we were moving smartly under sail crossing the lake. We tacked a few times and then entered another one of the canals.


Even in the canals we sailed because on the other side of the lake, with no housing development, there were no bridges on the canal - it was rural. We continued onward, sailing most of the way back, once in a while having to pole. The round trip took us just short of four hours.

Back in Steenwijk, in the evening we went to dinner and had a wonderful meal at Woody’s, a non-pretentious American styled restaurant with a mostly Dutch menu. 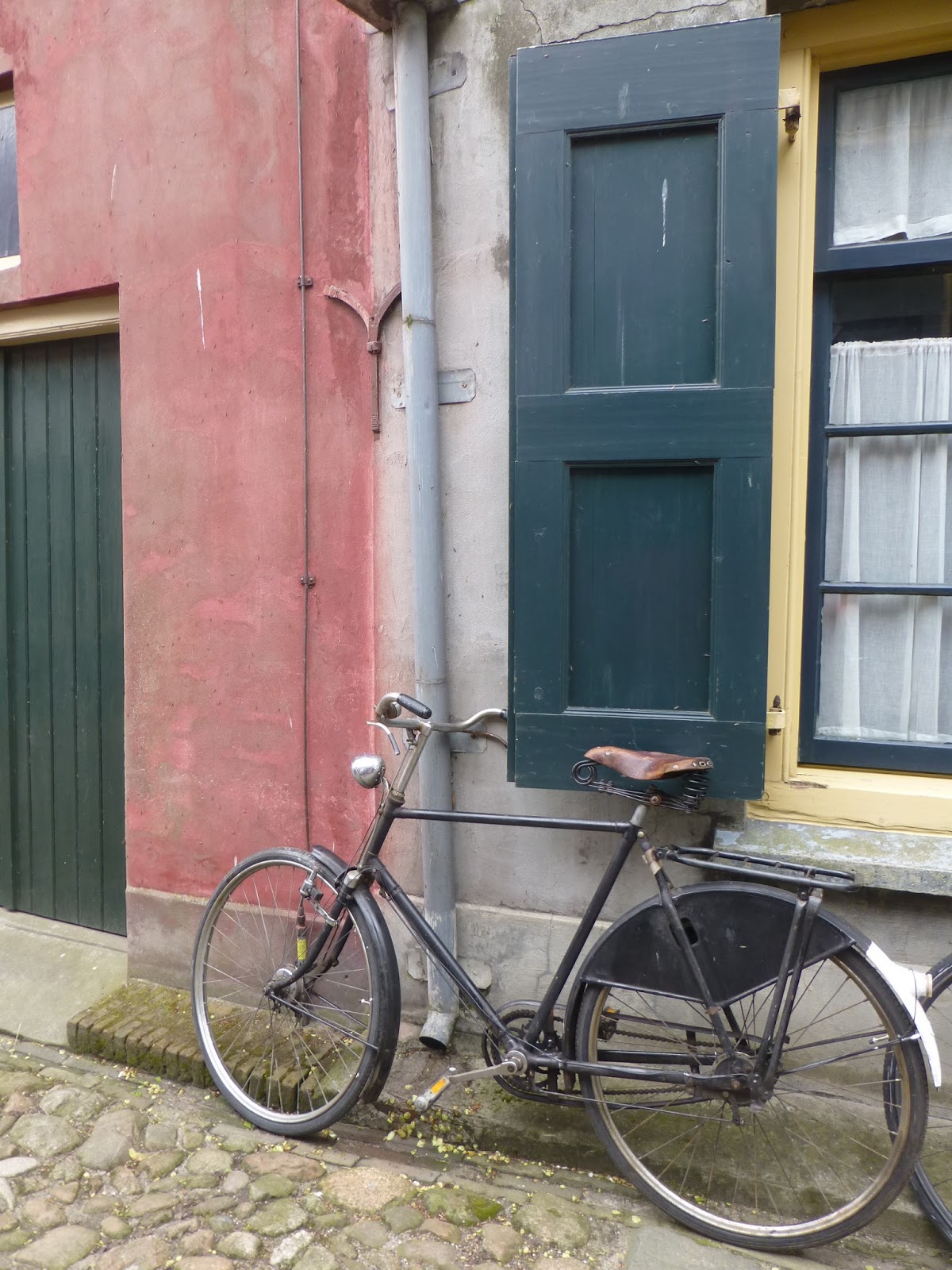 Posted by George at 1:39 PM No comments: