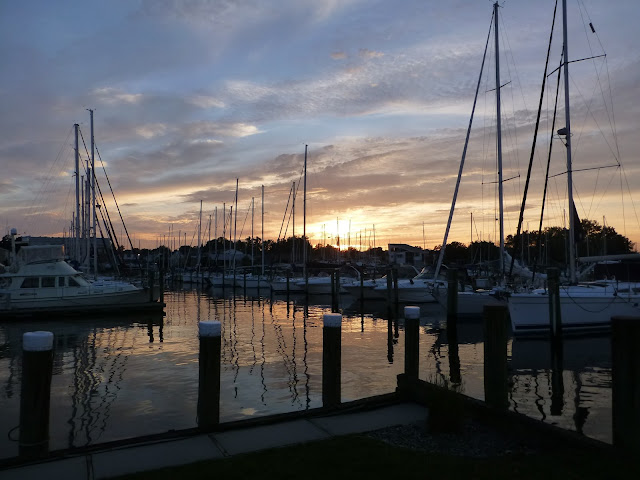 For a several years I’ve had the opportunity to sail on the east coast in the Chesapeake Bay with my long-time friend, Wes. This year, we chose to commence our cruise in mid-June. Although we had more time, we ended up sailing less due to warm and muggy temperatures, some rain, thunder and lightening, and a bit of a cranky diesel. We also had the enticing waterfront home of Wes’ friend, Susan, to keep us in Baltimore longer than we should have stayed. It was just too practical and much too relaxing to leave the comforts of her home.

On our first day out, we sailed from Havre de Grace and sailed southward. Heading directly into a southern wind forced us to tack back and forth for several hours until we came to the conclusion that if we were going to make any substantive progress we’d need to motor into the weather.

We motored until the engine started revving up and down and then suddenly sighed with its last breath and stopped. We made a few attempts to restart it, to no avail. We opted for the logical option, which was to hoist the sails and sail onward.


That evening we sailed into Worton Creek Bay and dropped anchor just like we knew what we were doing. We anchored in about ten feet of water. That night, just having starting dinner, heavy rain, lightning and thunder struck.

It rained several inches during the night. But in the morning the weather had improved. Thinking that the engine failure might be the result of a dirty fuel filter, Wes proceeded to replace it. Once again we attempted to restart the engine with the same result. Wes eventually got the engine running after replacing the fuel filter.

We stayed one more night in Worton Creek, taking the opportunity to relax, swim and plan our next move. In the evening we made a fabulous dinner, accompanied with a tasty red Bordeaux.


The next morning, we cranked up the engine, motored out of the harbor and headed for Annapolis. Fortunately, the wind had clocked around and was now abaft resulting in a great sail right up to the entrance to Annapolis.

We always enjoy Annapolis. Aside from being Maryland’s capital, it has a vibrant sailing community. Sitting at anchor in front of the Eastport Yacht Club gave us a perfect viewing of all the race activities going on in the harbor.


We stayed in Annapolis for another couple of days and were headed for Solomon’s Island when again the engine misbehaved. We eventually were able to restart it, but opted to return to Annapolis not feeling overly sure of the engine’s reliability.

Back in Annapolis Wes concluded that the problem we were having was related to the primary fuel filter. A quick visit to the local West Marine store resolved that issue. Otherwise we played tourist and attended the Eastport Music festival, a lively venue of bands, beer and babes.


The following day, with the weather looking a bit iffy for the rest of the week, we decided to go north to Baltimore. With not much wind, we tested the engine’s reliability. Luckily, the new filter seemed to have done the job. A few hours later we anchored in Baltimore’s inner harbor and walked over to Susan‘s home.

Susan’s home is sumptuous. On the top floor of a high rise building, what I found most extraordinary was that the elevator opened up into her home! The view of the harbor was not too bad either.


For several days, we traipsed around the Baltimore waterfront area including Federal Hill, attended an Orioles baseball game, had dinner at some of the local restaurants, had lunch at an indoor market, paid a visit to the unique American Visionary Art Museum that emphasizes self-taught artists and walked to a small farmer’s market.


No longer having any excuses to hang around the comforts of an air conditioned, waterfront home with no water leaks, Wes and I packed our bags and headed back on the boat to sail back to Havre de Grace.

Once in the main channel of the bay, we were fortunate to find a  south easterly wind that pushed us along quite smartly. Even the tide was an incoming one. In the late afternoon, the wind began to die just as we approached Worton Creek. That led us to an easy decision - we pulled in for the night. We also had spotted rain and lightening heading our way. 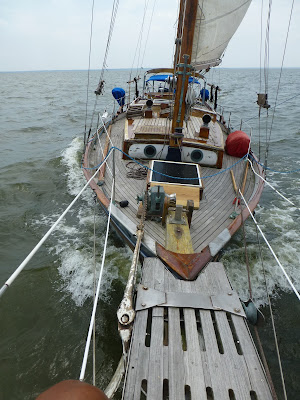 At anchor for the evening, we made dinner and enjoyed a bottle of red wine. It rained hard for a while; even a few leaks appeared in the cabin. But as luck would have it, the rain didn’t last long. We had a good night’s rest.

After a leisurely breakfast and a couple of cups of Wes’ espresso, we pulled up anchor and headed northward. The trip to Havre de Grace was an easy one. We motored for several hours, followed the channel markers in and arrived at Wes’ mooring by mid-afternoon.

After getting things squared away on the boat, we took the dinghy ashore and were promptly drenched by a squall. On cue, as we got into the car to drive back to Baltimore, the rain ceased.

Upon our return to Baltimore, we had a couple of more adventures including taking Wes’ new purchase, a BMW Z3, and his Suburban back to his house in Port Deposit. We also stopped by his lot, to see the vineyard he’s been tending and had lunch at a local biker bar. And that finished off another annual Chesapeake cruise - not a  typical one but as always, a lot of fun.