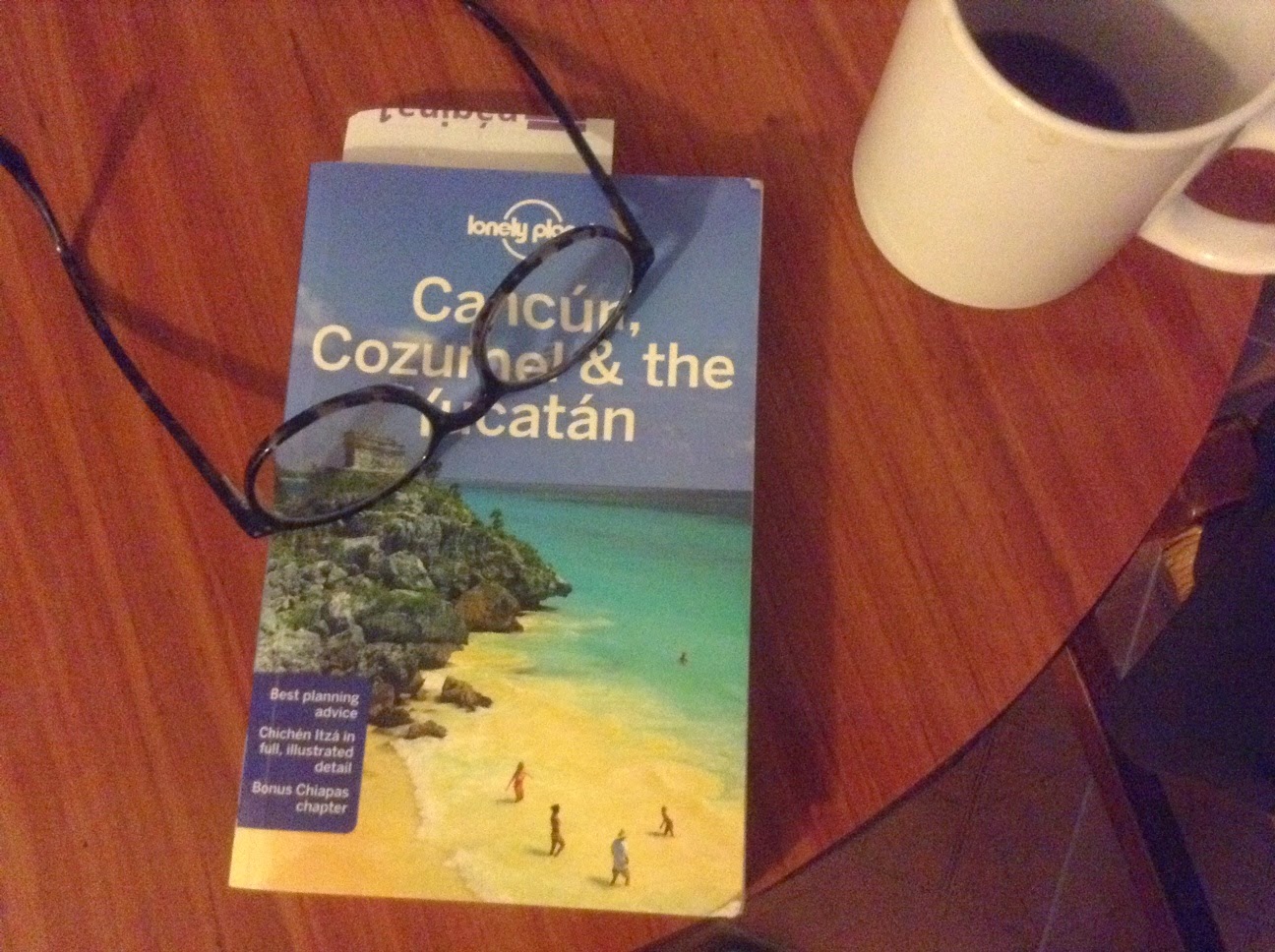 This year's trip, besides staying at the Omni for a week, we decided to venture out to Merida as well. In Cancun, we had a room on one of the top floors, with a good view of the white sandy beach below. It was great just sitting on the balcony listening to the surf and watching the clouds go by. But we did manage to take a couple of fun, day-long excursions. 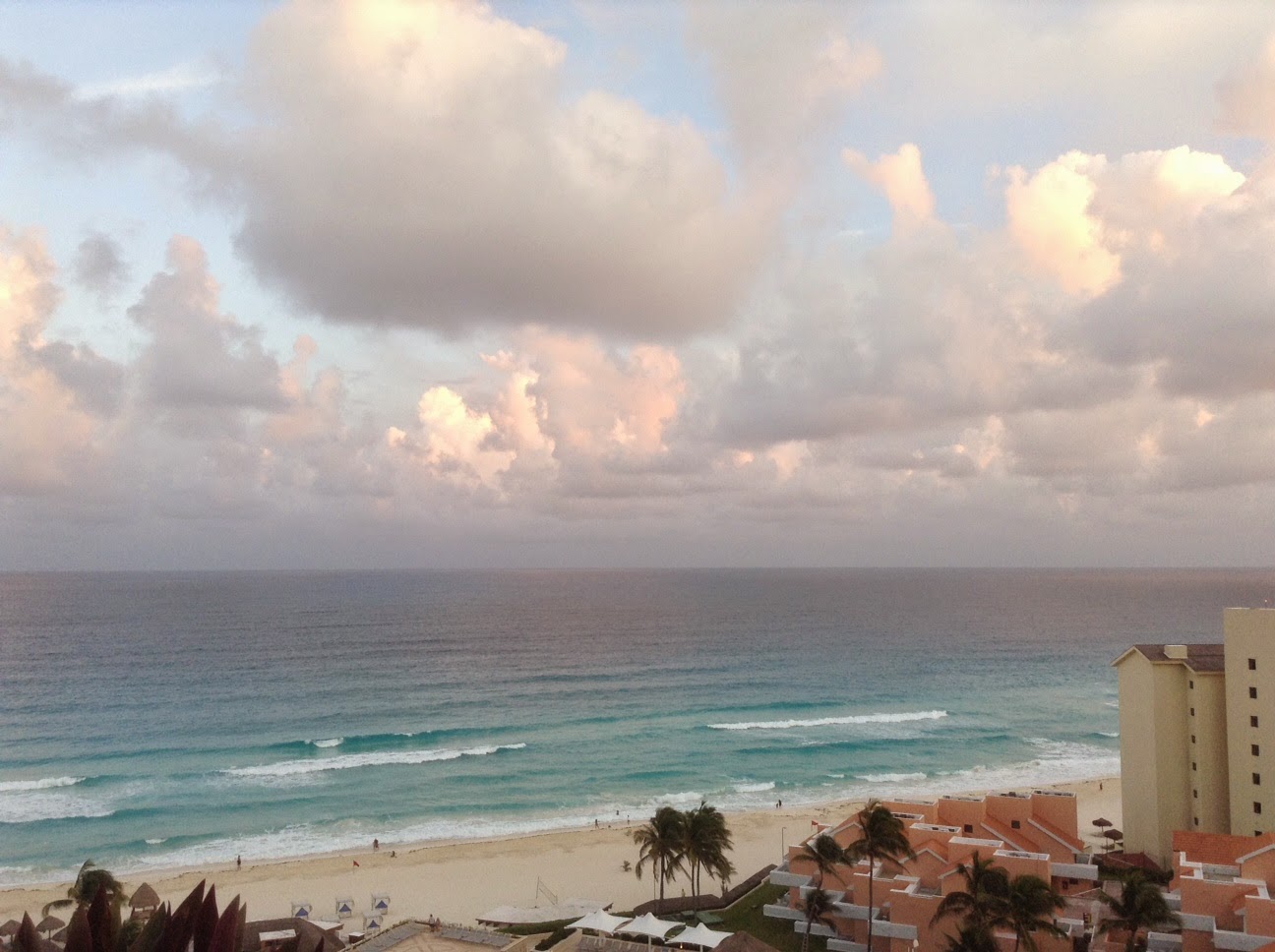 Rio Secreto was first. The secret river trip was thoroughly enjoyable and exciting. We planned it on our own, not with a tour operator. It required an early start from the hotel by public bus to the ADO bus station, downtown Cancun. From there we took another bus that dropped us off at the front entrance to the park. It did take a while to get there because the bus often stopped to drop off or pick up new passengers. In all, it took about two hours.


After checking in, we and several other tourists were driven inland to cabanas where we were furnished wet suits and booties. There was clean and comfortable dressing room. Once suited, we were given helmets with headlamps and, for those who wanted them, walking sticks. With our female Russian tour guide, we proceeded to walk through a jungle path for a couple of hundred yards and came upon a Mayan man, who performed a short ritual to the gods of the underworld, dousing each of us with a smoky, sweet smelling incense. We were now ready to proceed into the cave. 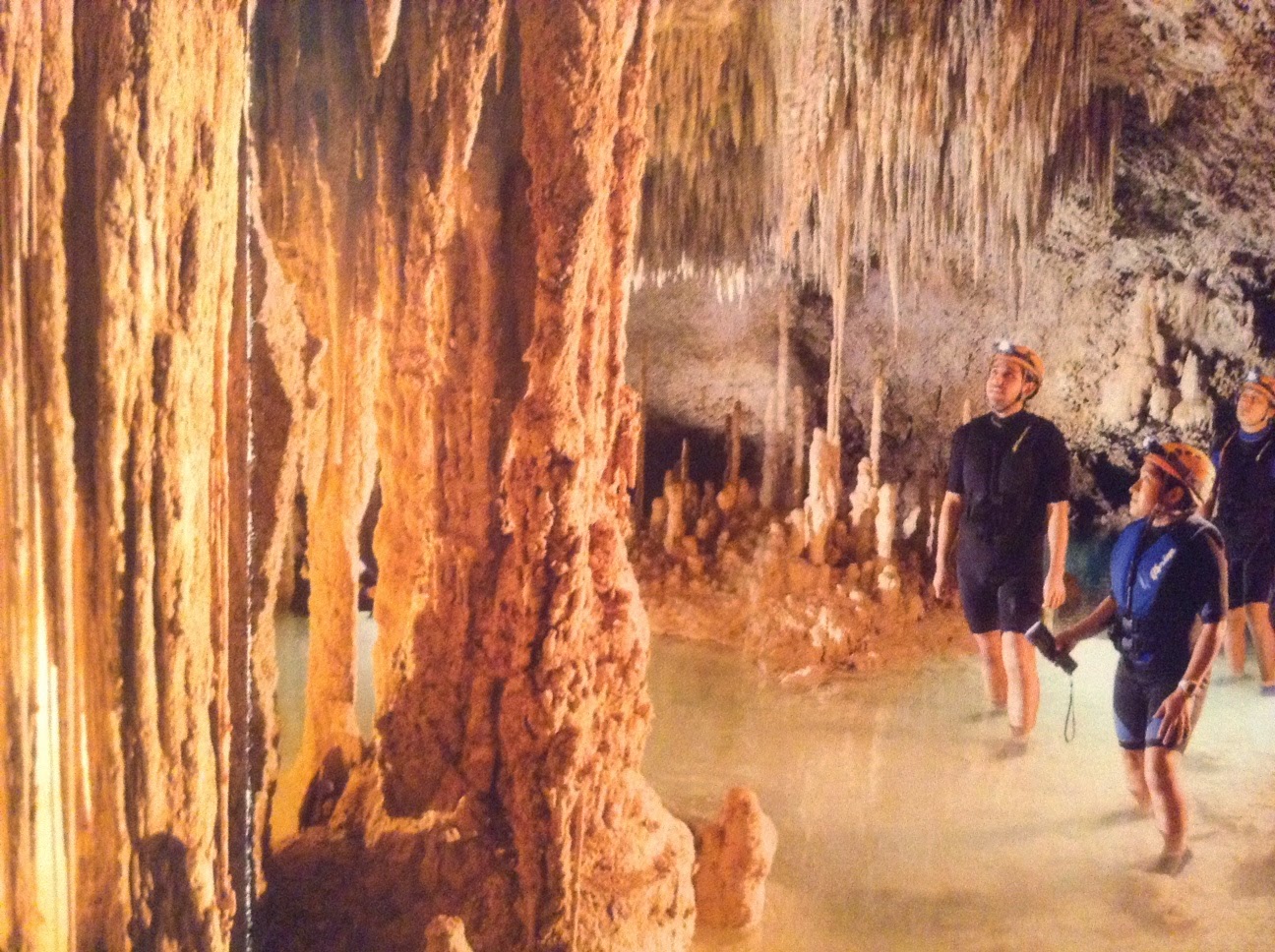 Shortly after entering the cave we encountered the ankle-deep water of the underground river. As we got deeper into the cave, the river also became deeper. The cave was pitch black with only our headlamps and our tour guide's flashlight.

We were soon surrounded by beautiful stalagmites and stalactites. Stalactites, the ones that hang from the cave's ceiling, look like icicles. Our guide explained that stalactites grow from water and calcium seeping through the limestone. Once inside the cave, the drips of water and calcium form a stalactite. It grows very slowly - about an inch every 250 years. Then, with water drops from the stalactites falling on the ground, the deposits create a stalagmite. Over time, some will form a cone-like shape high enough to meet the stalactite to form a what's known as a column. We saw several examples of the columns. 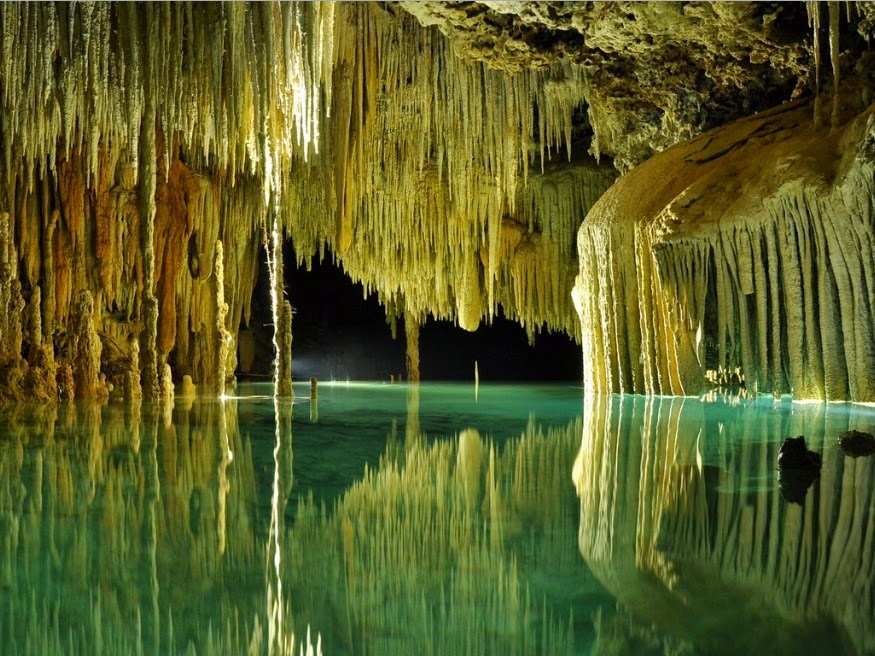 The tour only encompassed a small part of the twenty mile long cave. At times we had to swim through deep areas while at other times we walked on hard ground, always being cautious not to touch our delicate surroundings.

We spent about two hours walking, wading and swimming through the cave. It was a fascinating adventure. Afterwards, they fed us a tasty Mexican lunch comprised of chicken, rice, beans, a cactus vegetable and fruit.

The other tour we took while we were in Cancun was to Isla Contoy, a small island about an hour and a half north of Cancun. Isla Contoy is a marine reserve that has lots of bird life, as well as marine life.

The boat trip was pretty rough due to strong winds and choppy seas. For those daring the upper deck seats, we got a good soaking. But it was warm - no problema! On our approach to the lee of the island, we were greeted by pristine white sandy beaches and crystal clear water.
After docking we went for a walking tour of the narrow island. We visited one of the areas that frigate birds use for mating and nesting and saw some of the male birds with their engorged orange throat sacks that they use to attract the females. Another  interesting fact about frigate birds - they can stay aloft for a week with no food and water (and they are able to sleep while flying).


In the afternoon we lunched on barbecued fish, chicken, rice, beans, and salad. After the lunch settled a bit, we went snorkeling. Although we saw a variety of sea life, the highlight to me was seeing a 3-4 foot grouper that must have weighed hundreds of pounds.


Our return to Cancun was faster and smoother than on the way over. It had been another fun-filled adventure.

After spending a week in the Cancun area we headed for Merida. To get there we took the ADO bus. It was about a four hour trip. The bus was a luxury class and offered movies with head phones, drinks and bathrooms.

Our hotel, del Perigrino, was a twenty minute walk from the bus station, near the center of Merida. It was a friendly, comfortable and well located place, with a wholesome buffet breakfast. 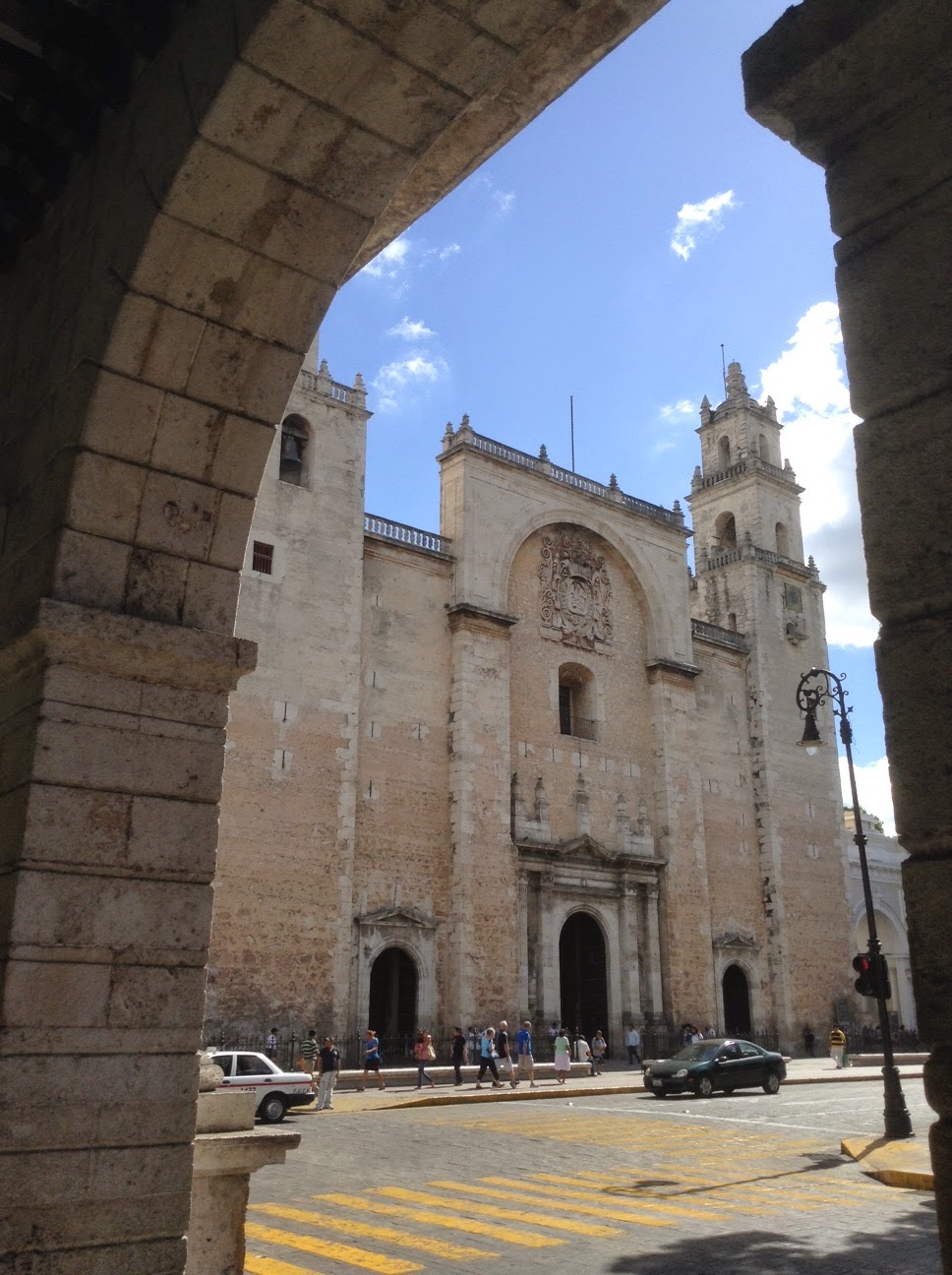 Besides being the capital of the Yucatan, Merida is central to the Mayan culture. Since we were there for only four days, we opted to spend our days in town, rather than go on day-long side trips. We visited museums, cathedrals, parks, mercados, the nearby beach town of Progresso and attended an evening Mayan cultural dance.

At the hotel, we encountered lots of friendly and interesting fellow travelers from the U.S., Canada, the Netherlands and Germany. After our four day stay, we took the bus back to Cancun. We stayed at a downtown hotel, El Rey del Caribe, where we had stayed before. The following day we flew home.

Posted by George at 5:50 PM No comments:

At High Speed on the Audubon 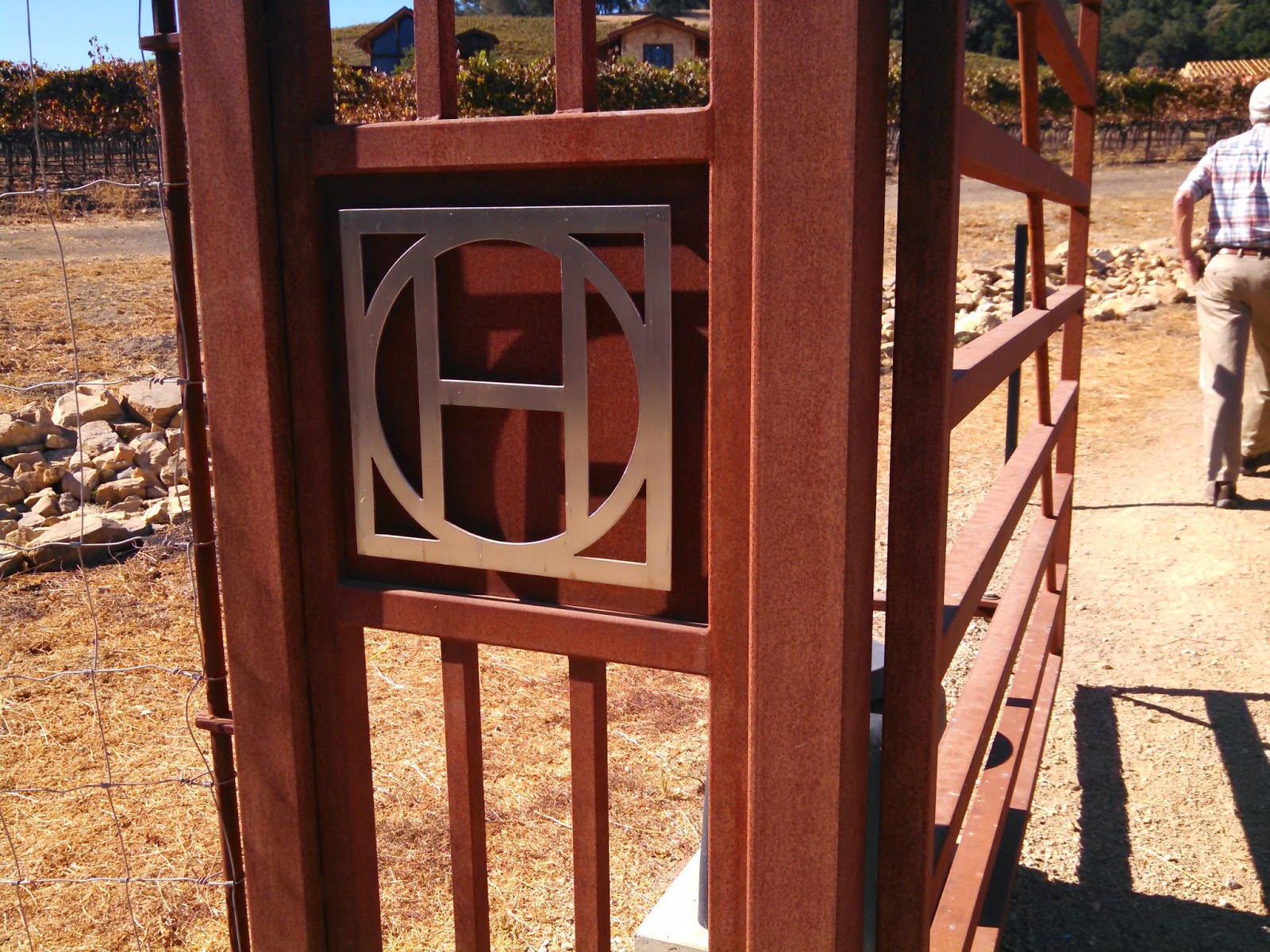 This past weekend we went to a fund raiser for the Audubon Society with our friends, Darren, Jen and her mom. The event was held at Halter Ranch Winery in Paso Robles and offered a tour of the winery and its caves, wine, food and an auction.

Surprisingly, the president of Audubon, David Yarnold, attended the function. He gave an inspiring, yet brief, pep talk about the organization's history and mission. It's all about birds - saving them from extinction, which dates back to over 100 years ago.

It was an inspiring evening with lots of good conversation, food and wine. The Halter Winery itself inspiring, offered glimpses into what can be accomplished when the desire and money are there to build a state of the art winery that uses sustainable farming techniques. 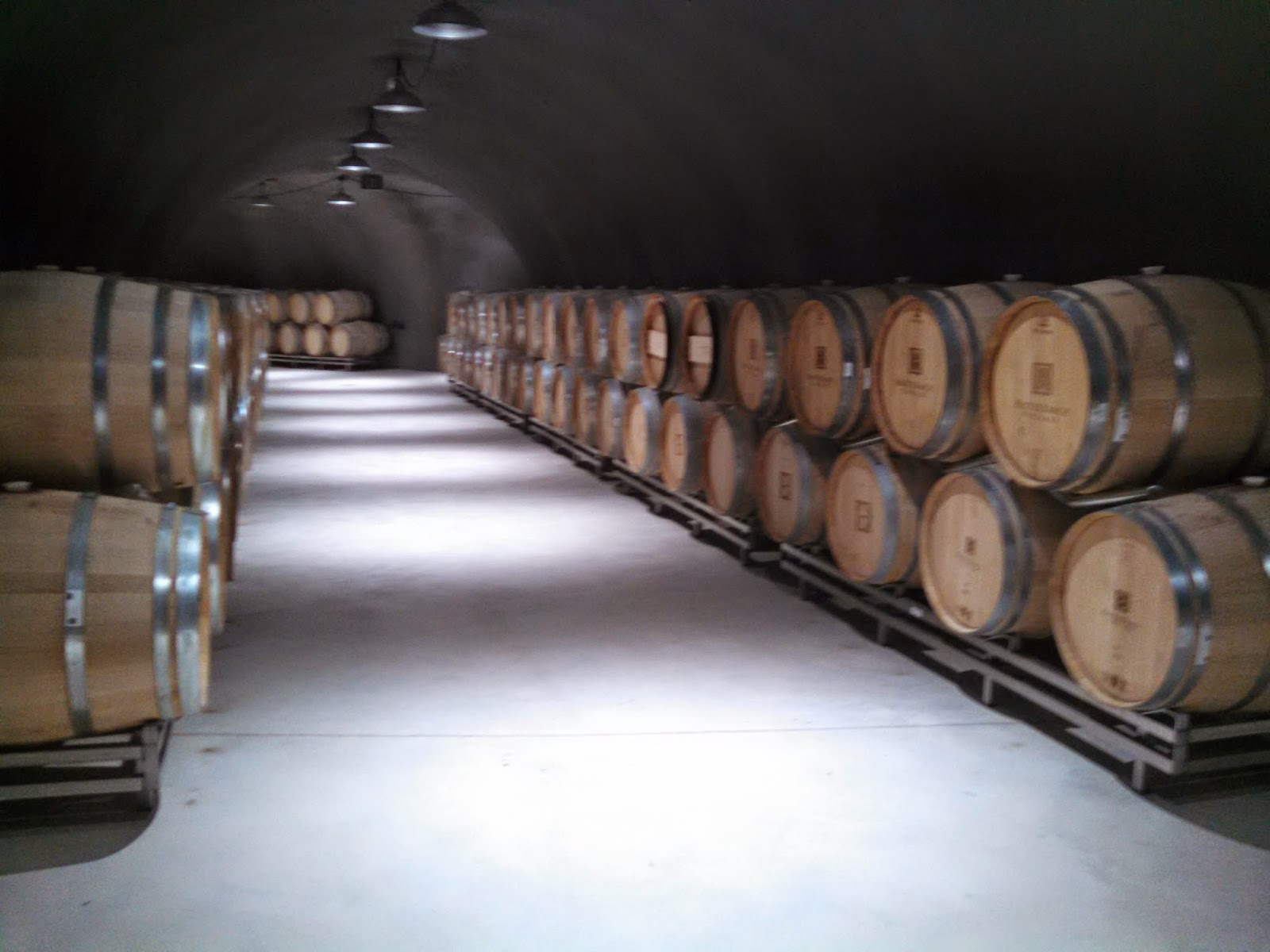 Their cave is state of the art and runs deep into the hills. 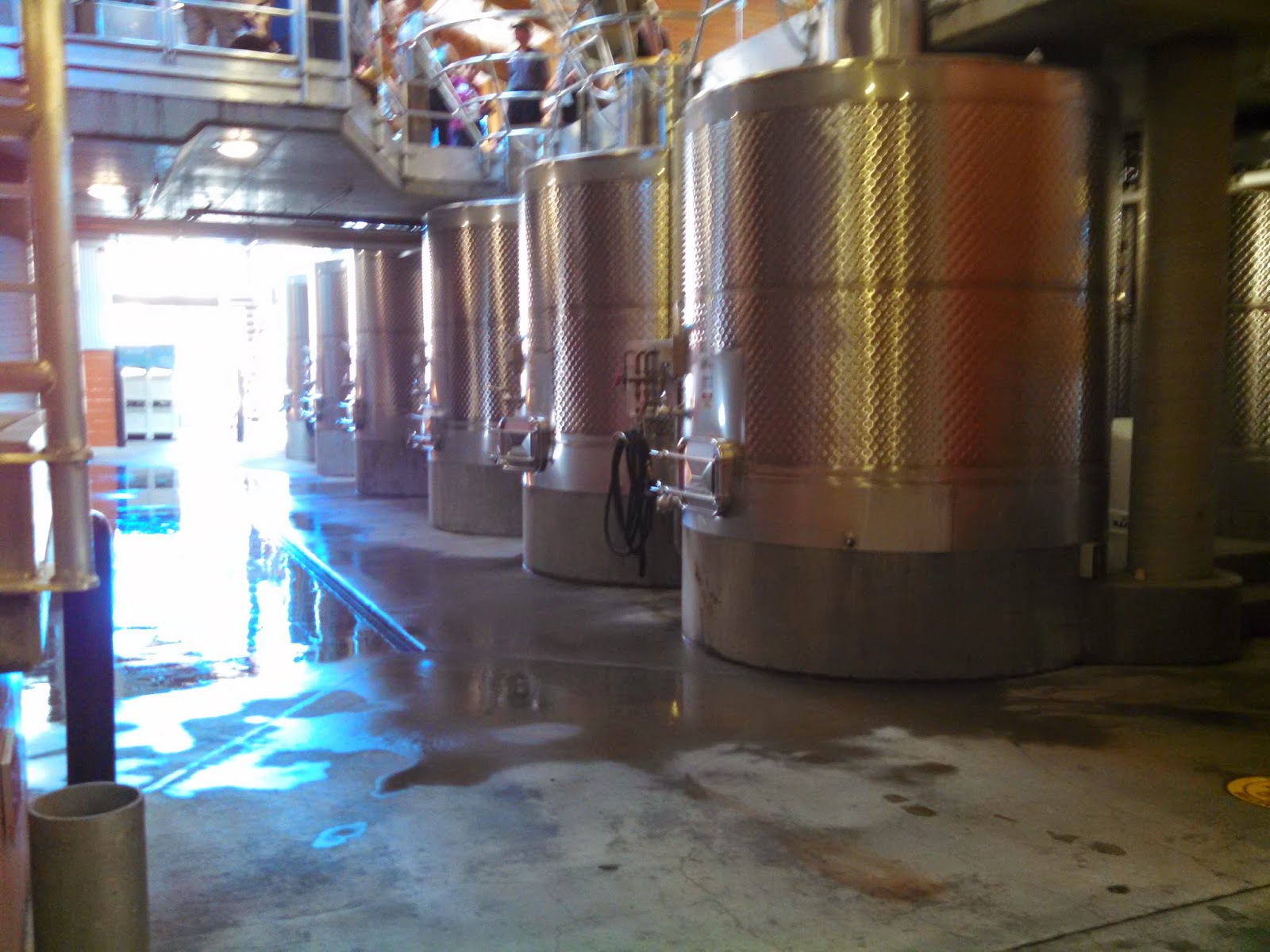 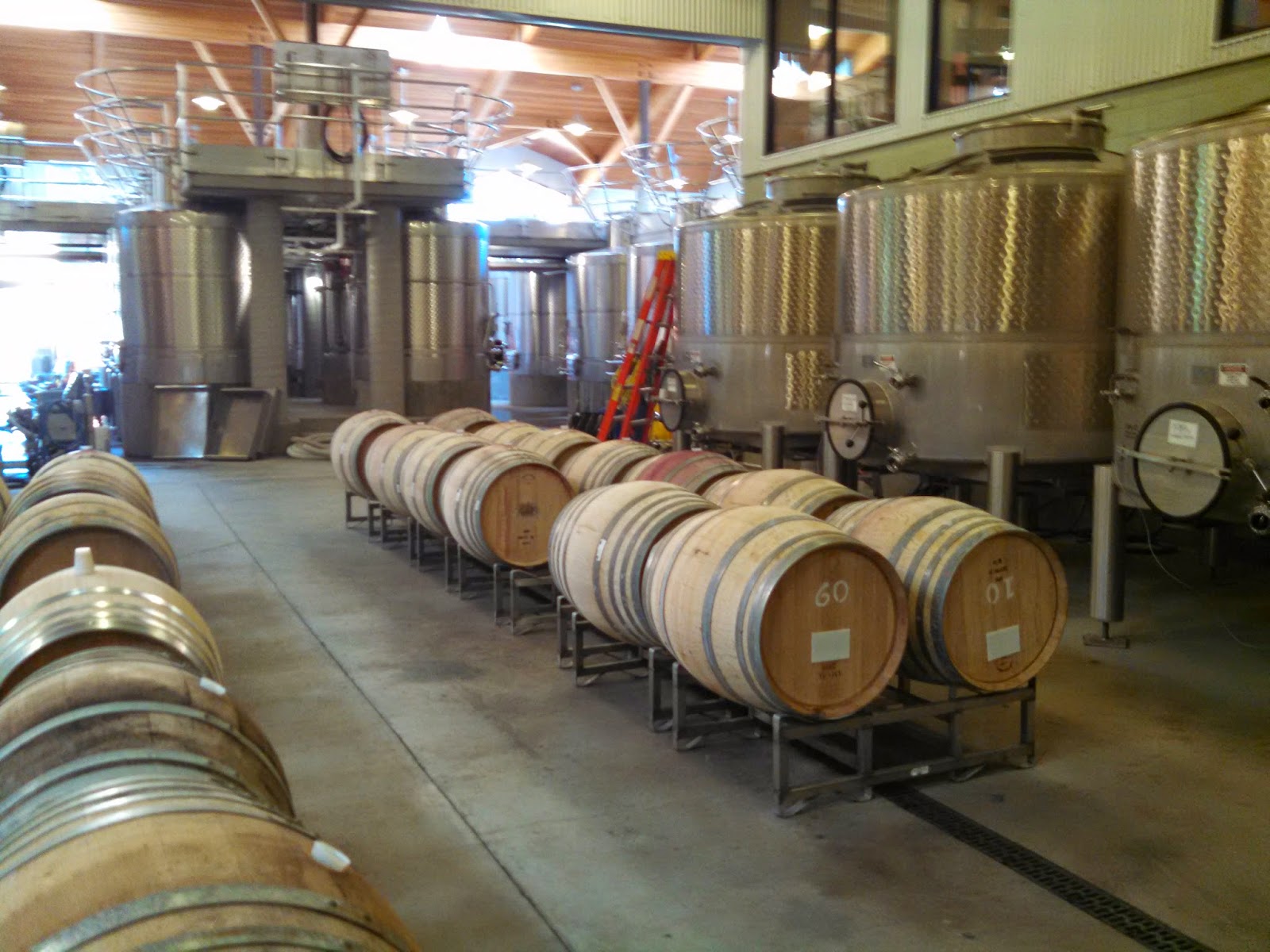 Part of their fermentation and aging facility. 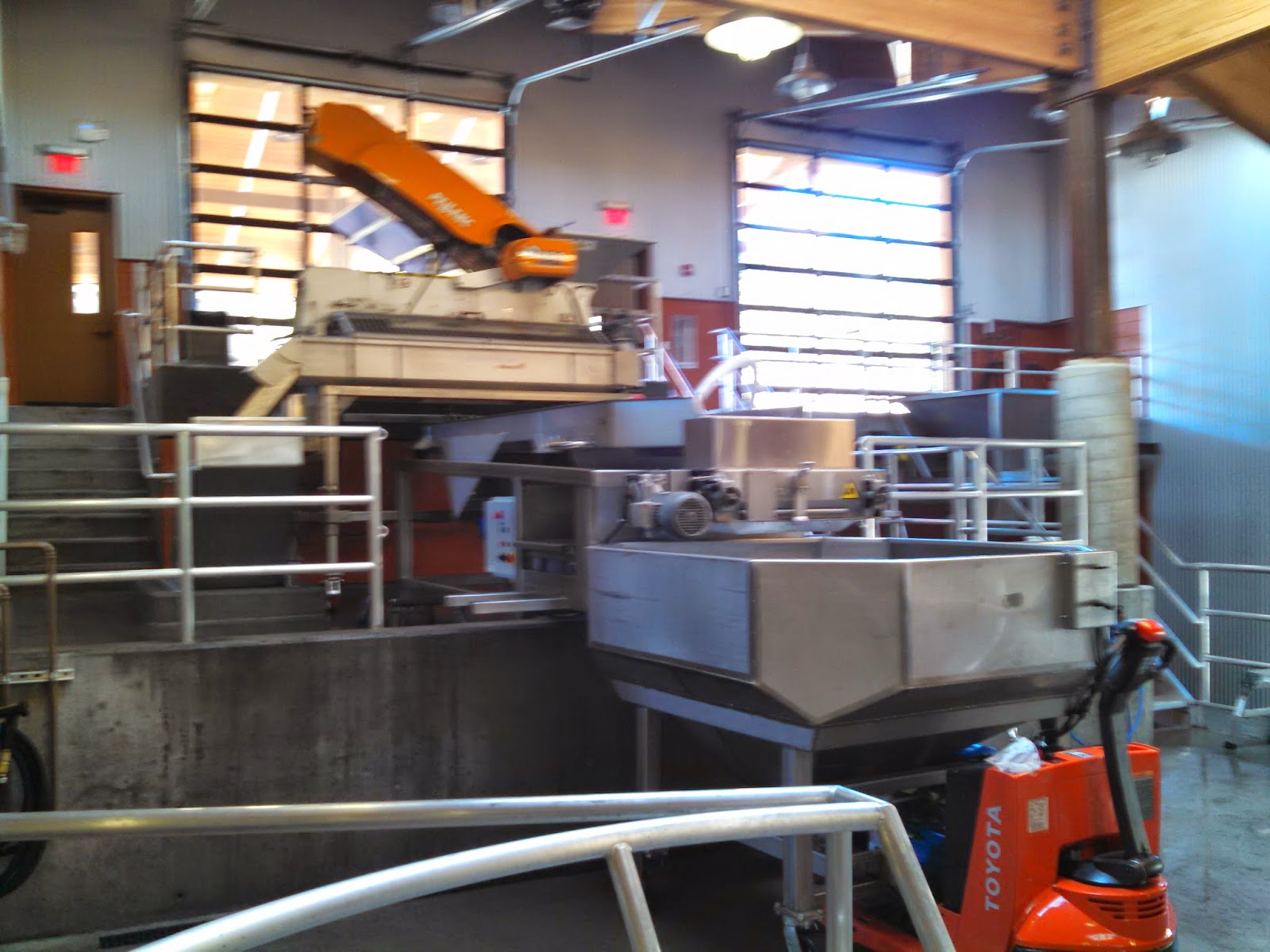 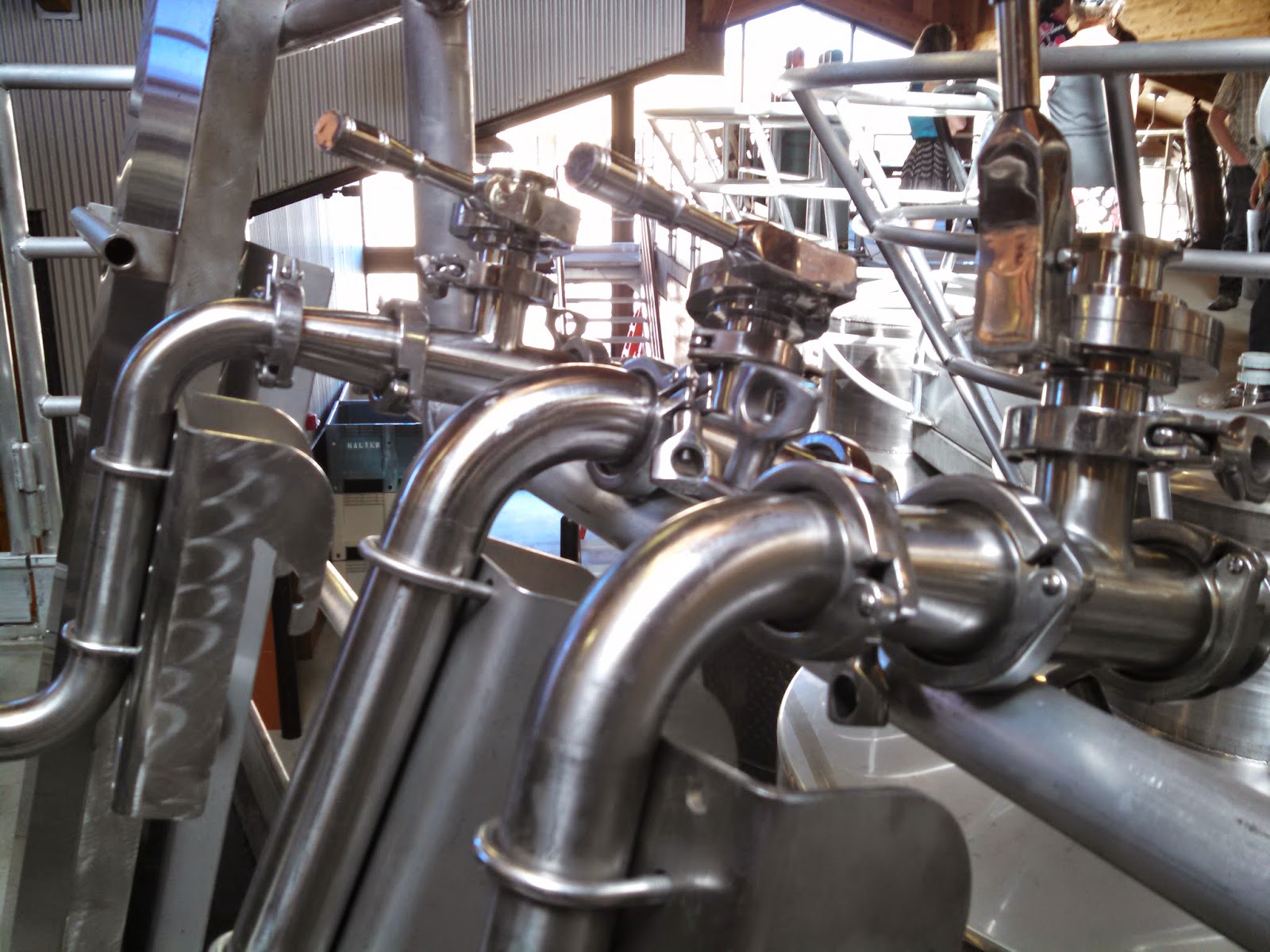 Posted by George at 9:30 PM No comments: 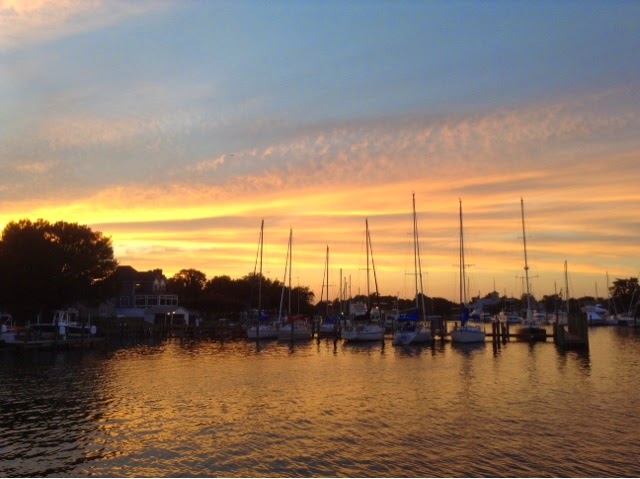 We had a very late start on our first day due to car problems on our way to the boat. With the late departure, we were only able to make it to the Sassafras River just out of Havre de Grace. But who cares, the Sassafras is a lovely place to spend the night at anchor. 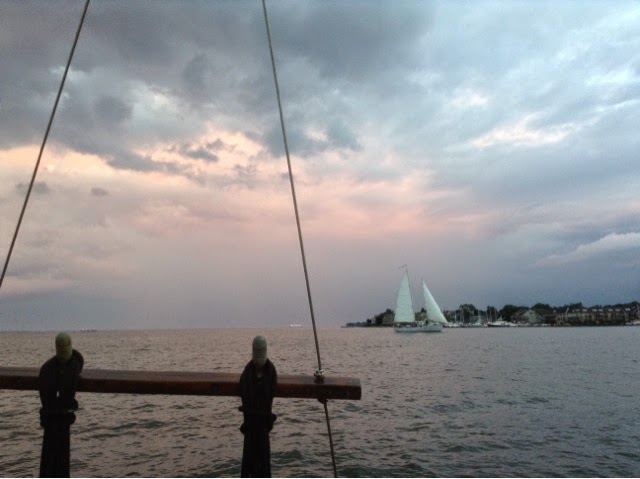 The following day, with southerly winds, we motored to Annapolis and anchored in front of the Naval Academy.

In the morning, after getting ice, we sailed and motored across the bay to the Honga River, anchoring in a wide open, yet we'll protected area near a long neck of land called the Lower Hooper Island.

On Saturday we had a part motor, part sail day to the mouth of the Potomac River and anchored on the southern side, on the Glebe River. After getting settled, we had a refreshing dip in the river. 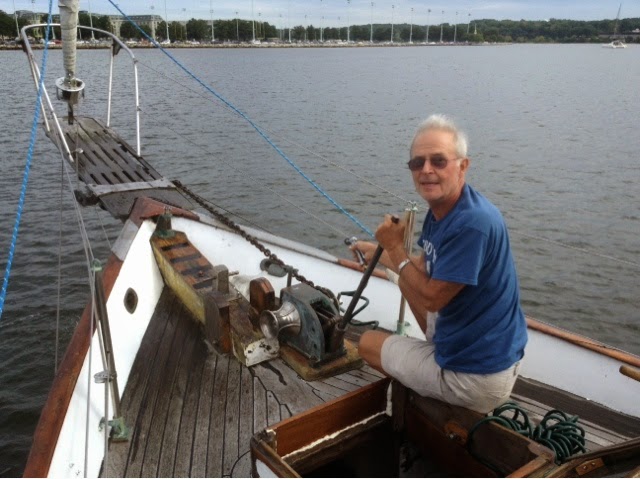 The following day we had a easy beam reach sail, followed by a couple of long tacks to make it to Reedsville, an old fishing town where they've been fishing for menhaden fish for many decades. The menhaden are used to make Omega-3. It's a smelly, placid place but very charming with beautiful homes dating back to the mid-1800's. 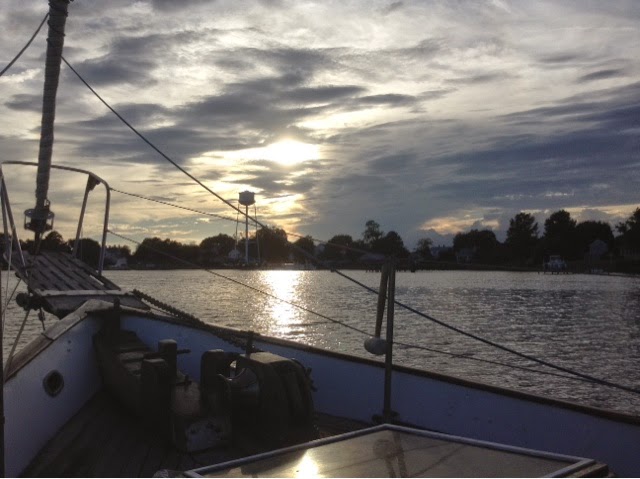 On Sunday, after a late start, the winds had shifted to the north, leading us to an easy reach south to Deltaville. The following day we decided to head out again to claw our way north a bit. But the nor'easter accompanied with a steady rain, proved too much for us. After about a half an hour of getting pounded, we returned to port. We stayed on in Deltaville for another day.

On Tuesday we got a ride into town with Chris, the Fisherman Bay Marina worker, who graciously gave us a ride through the area and to the grocery store. 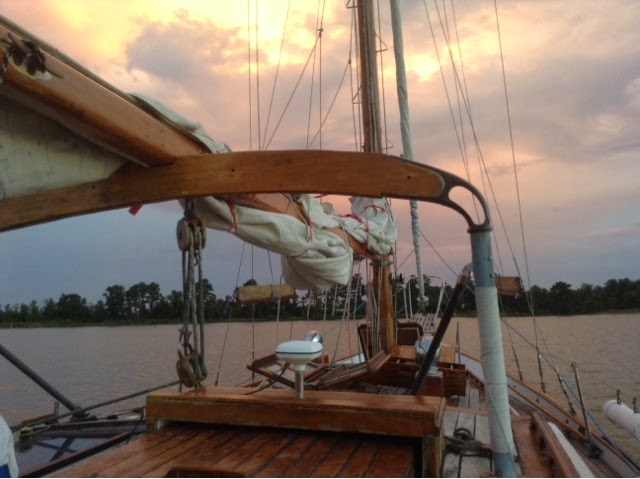 Early Wednesday morning we left Deltaville with the goals of making it back to Solomons, about 50 miles north. Tacking on another 10 miles to get out of the harbor and get in to Solomons made for a long day. We finally anchored at 11 pm, had a glass of wine and went to bed. 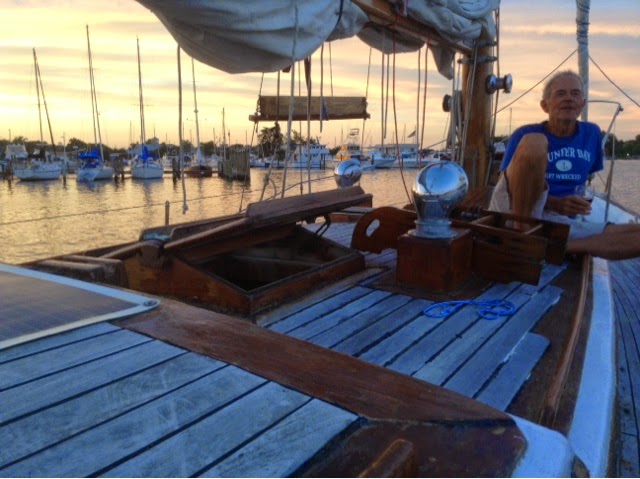 With dire weather predictions of severe thunder storms and rain for Friday, we left early Thursday morning after taking on fuel, water and ice. The wind had now clocked around to the south, making for a smooth downhill run to Annapolis. We anchored right in front of the Naval Academy for the night, opened up a nice bottle of Bordeaux Superior and fixed dinner.

The following day, we got up early for a northerly run. We didn't have a particular objective in mind since we didn't know what we were going to encounter as far as weather, winds and seas. When we got out there, it was a tough slog going under the Bay Bridge, as the bowsprit dipped deep into the water and restrained our progress. With gusts up to 20 knots and choppy 4-5 foot seas, we made slow progress. 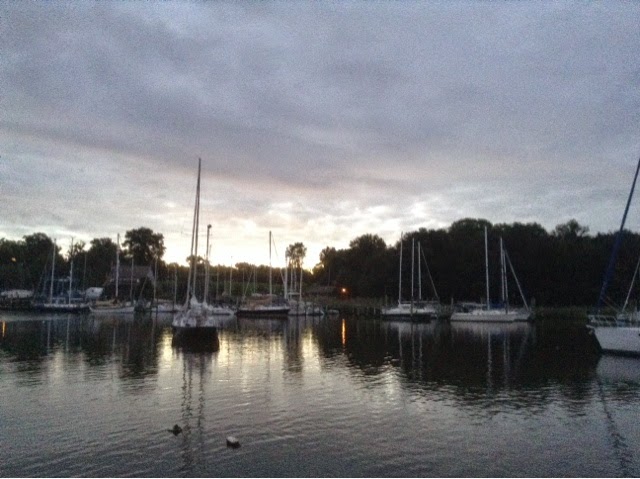 But once we past the bridge, conditions improved and we were able to make good a course to Worton Creek. Several hours later we were in a snug little harbor, anchored in 7 feet of water. We concluded the day's run with a cold margarita.

In the morning, after a breakfast of oatmeal and cantaloupe, we left Worton Creek for Havre de Grace. With not much wind, we motored our way up the channel. By 1pm, after encountering some rain, we picked up the mooring line at Havre de Grace and concluded another fun and successful annual cruise. 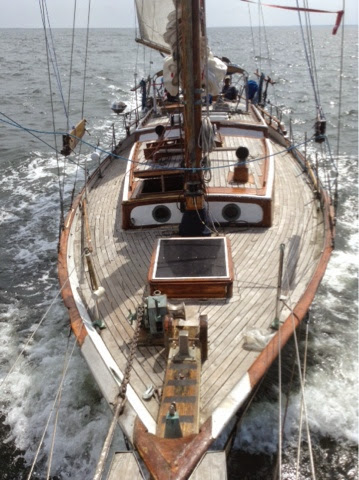 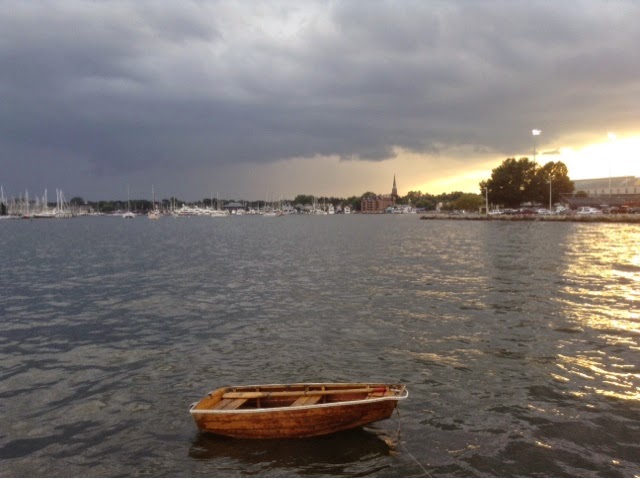 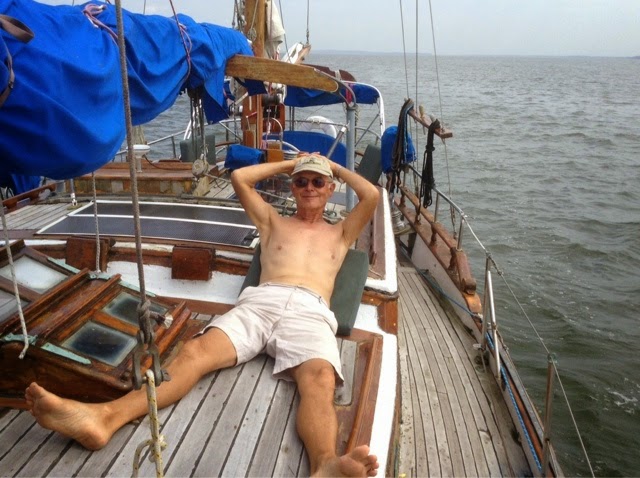 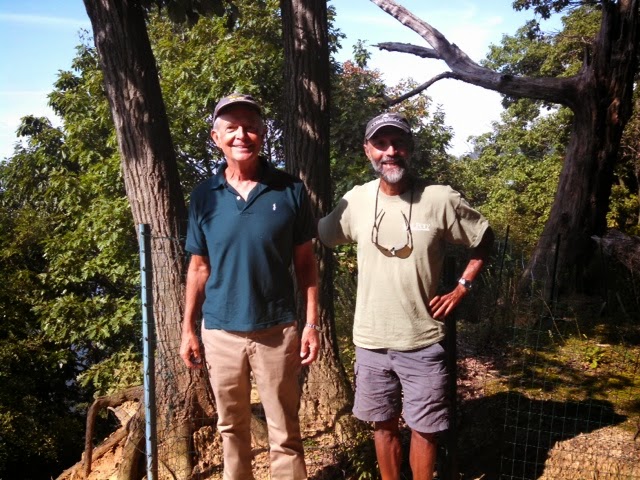 Since I've been keeping my mom and dad busy feeding me, changing diapers and keeping me entertained, it's been pretty much up to my opa and oma to get the word out on what I'm up to these days. So here's the latest.