Getting Around in Amsterdam 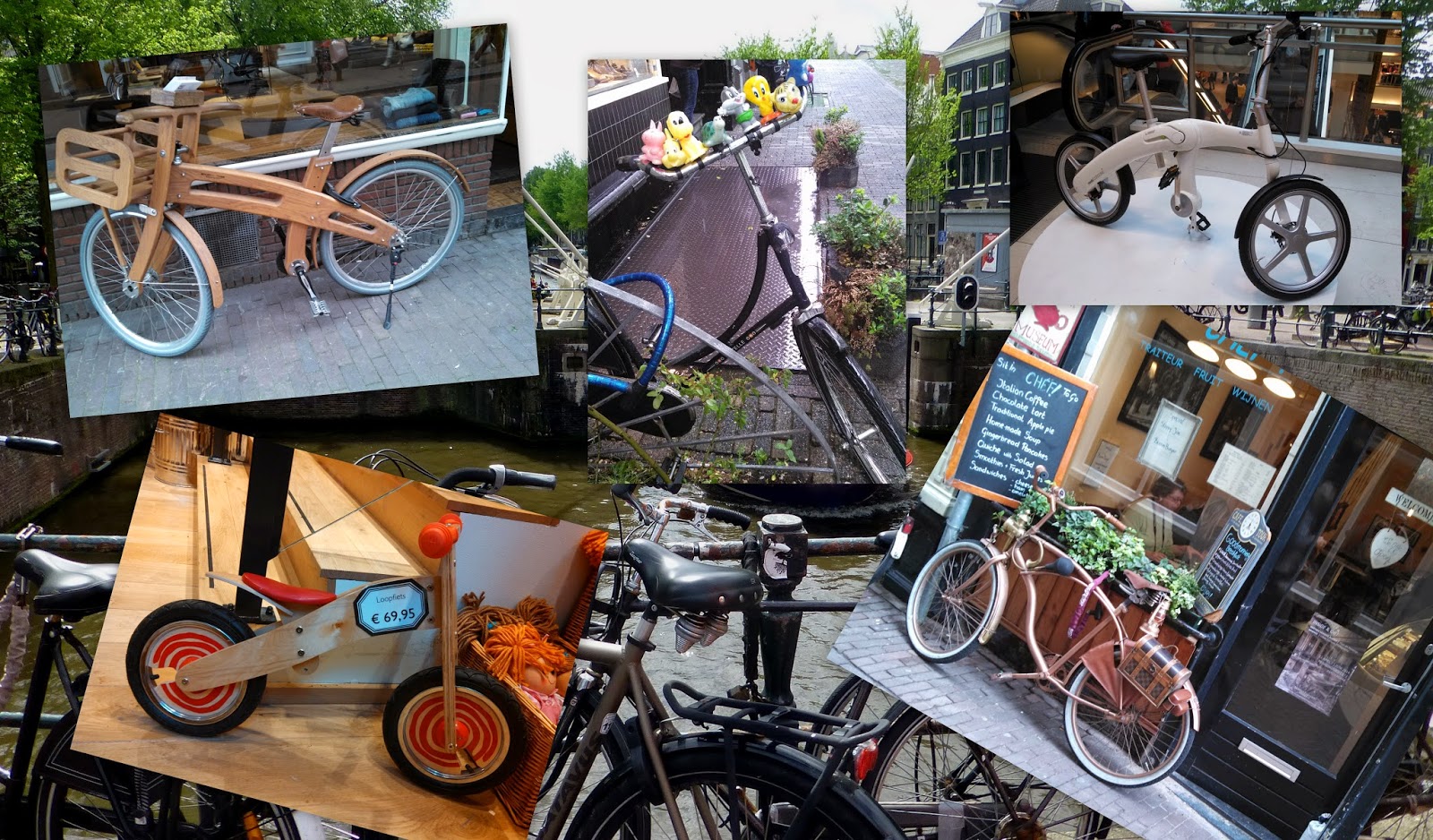 Getting Around in Amsterdam.

Amsterdam is an easy city to get around. It has a superb tram system augmented by a bus service. But, by far, the easiest way to get around the city is by bike. Amsterdam is just such an easy place to bike around in. With over 400 km. of bike trails and lanes, the infrastructure for biking is one of the best in the world. And it’s very flat - the hardest part of the ride is getting over the canal bridges!

The first thing that an American cyclist will notice is that no one here wears a helmet - men, women, adults, children, and even babies - no one. The other rather obvious observation is how at ease everyone is on their bike. It’s practically an extension of their limbs.

Here, the cycling culture develops young. When kids are barely able to walk, they are given a loopfiets (a walking bike) to learn to balance and ride around. When they start school they are taken there on bikes and when they can ride a bike, parents ride along side and take them to school.


One often sees mothers with their daughters riding side-by-side on their bikes, as you do fathers with their son doing the same. Or you see a parent on a bicycle with one child sitting in the front and one child in the backseat. 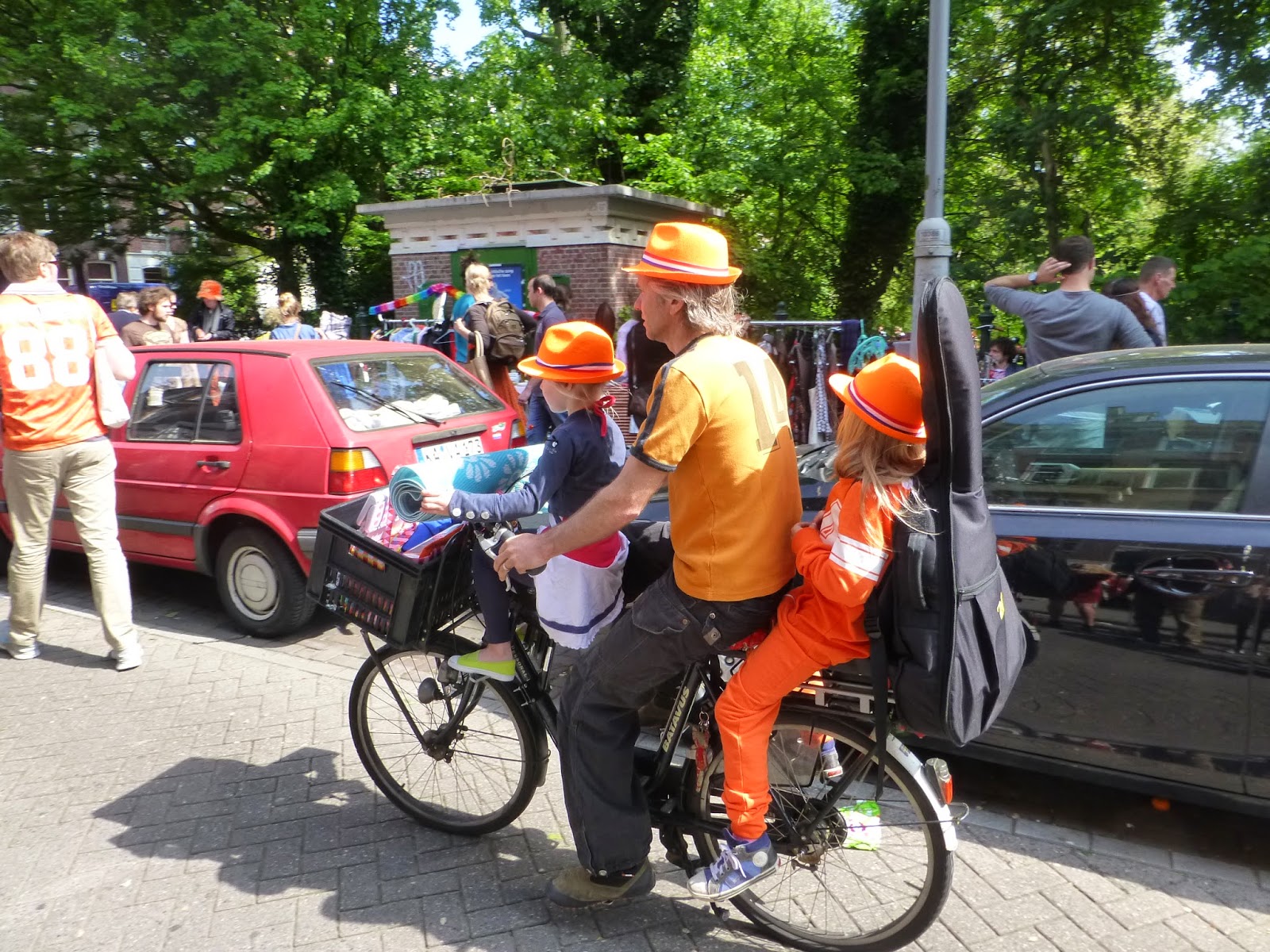 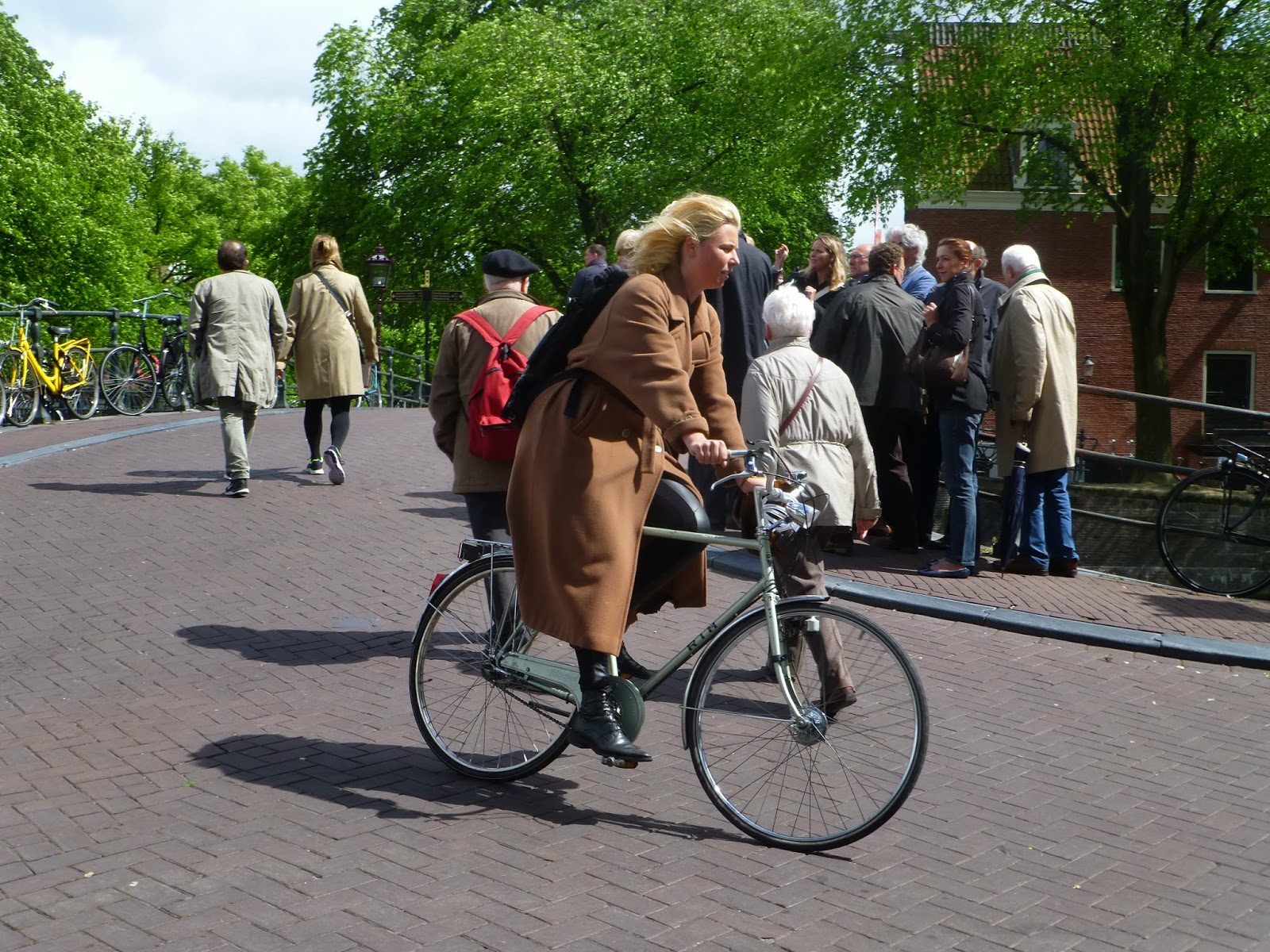 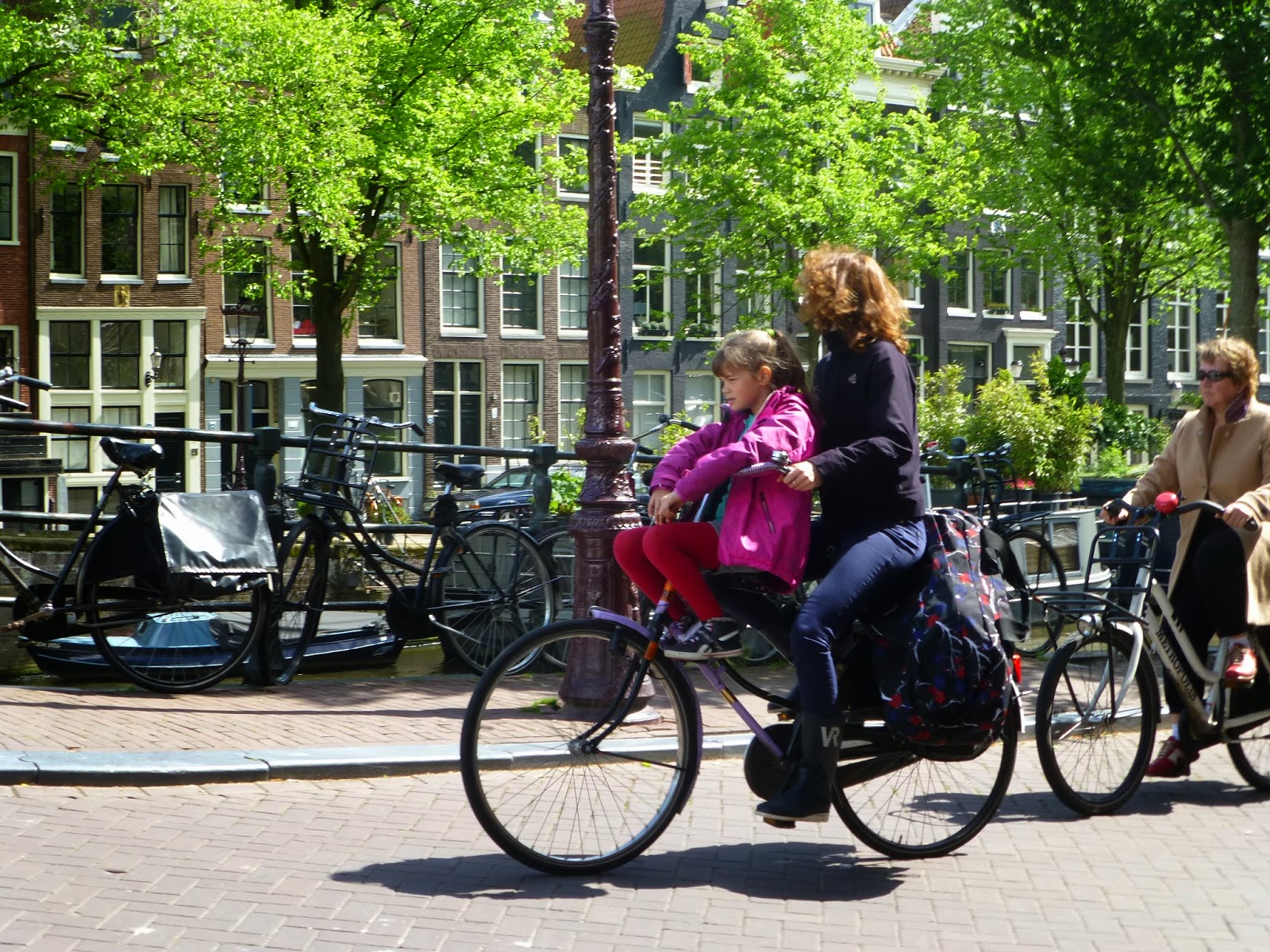 There are people talking on their cell phones with one hand and steering with the other. A couple, each riding his or her own bike, may be holding on to one another. A mother riding a bakfiets (a type of bike with a wooden box in front) with a couple of kids in it. 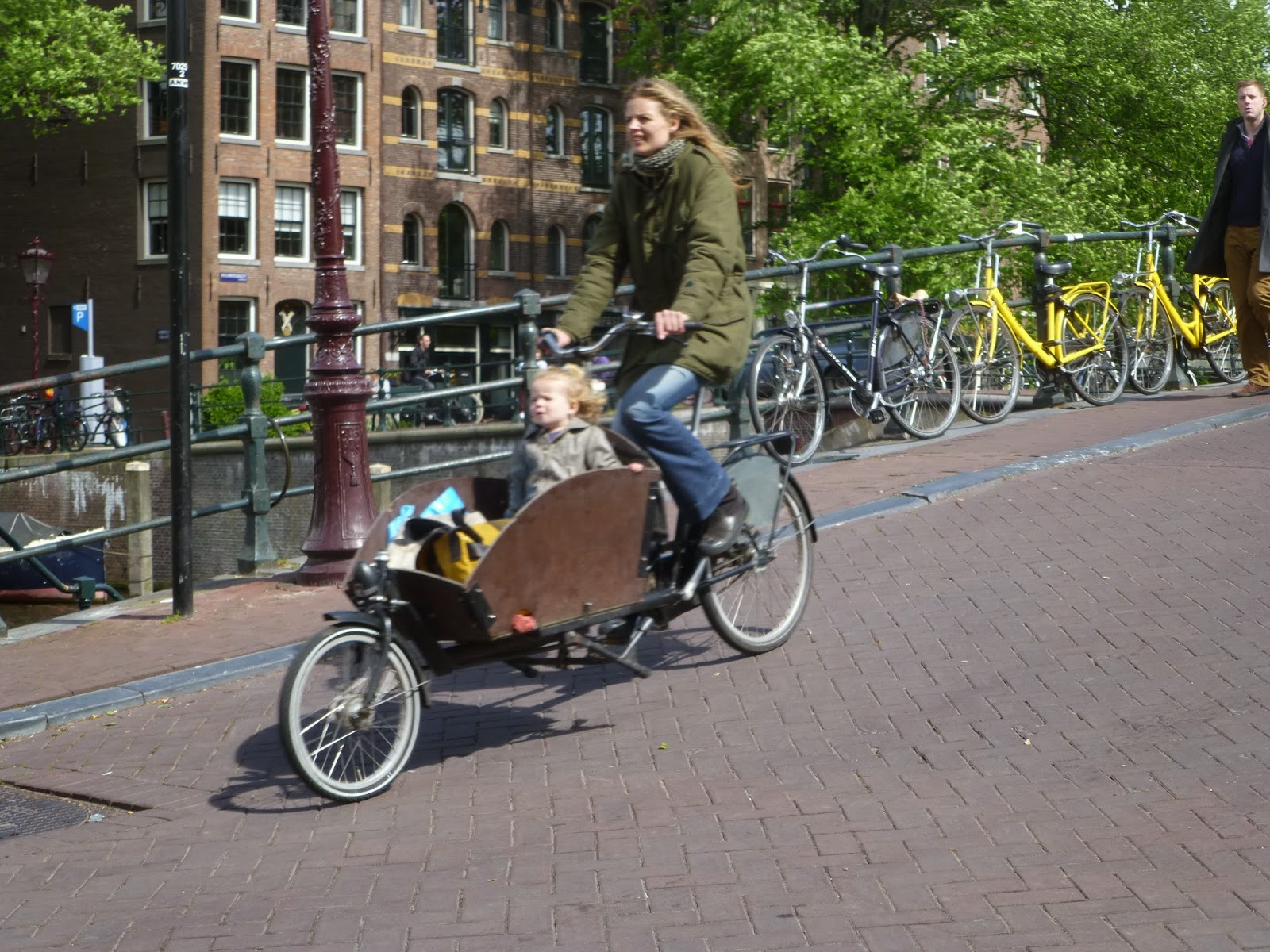 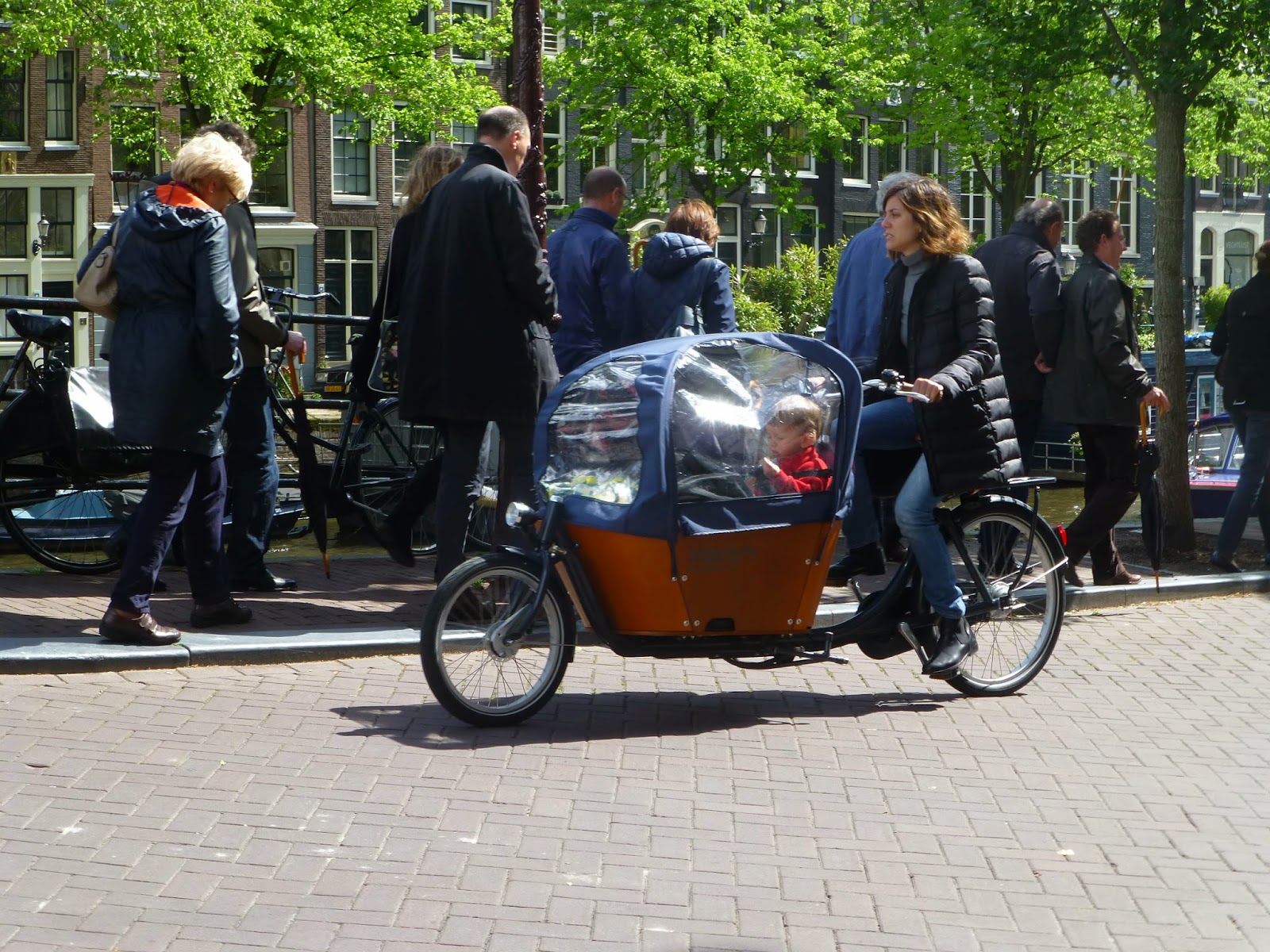 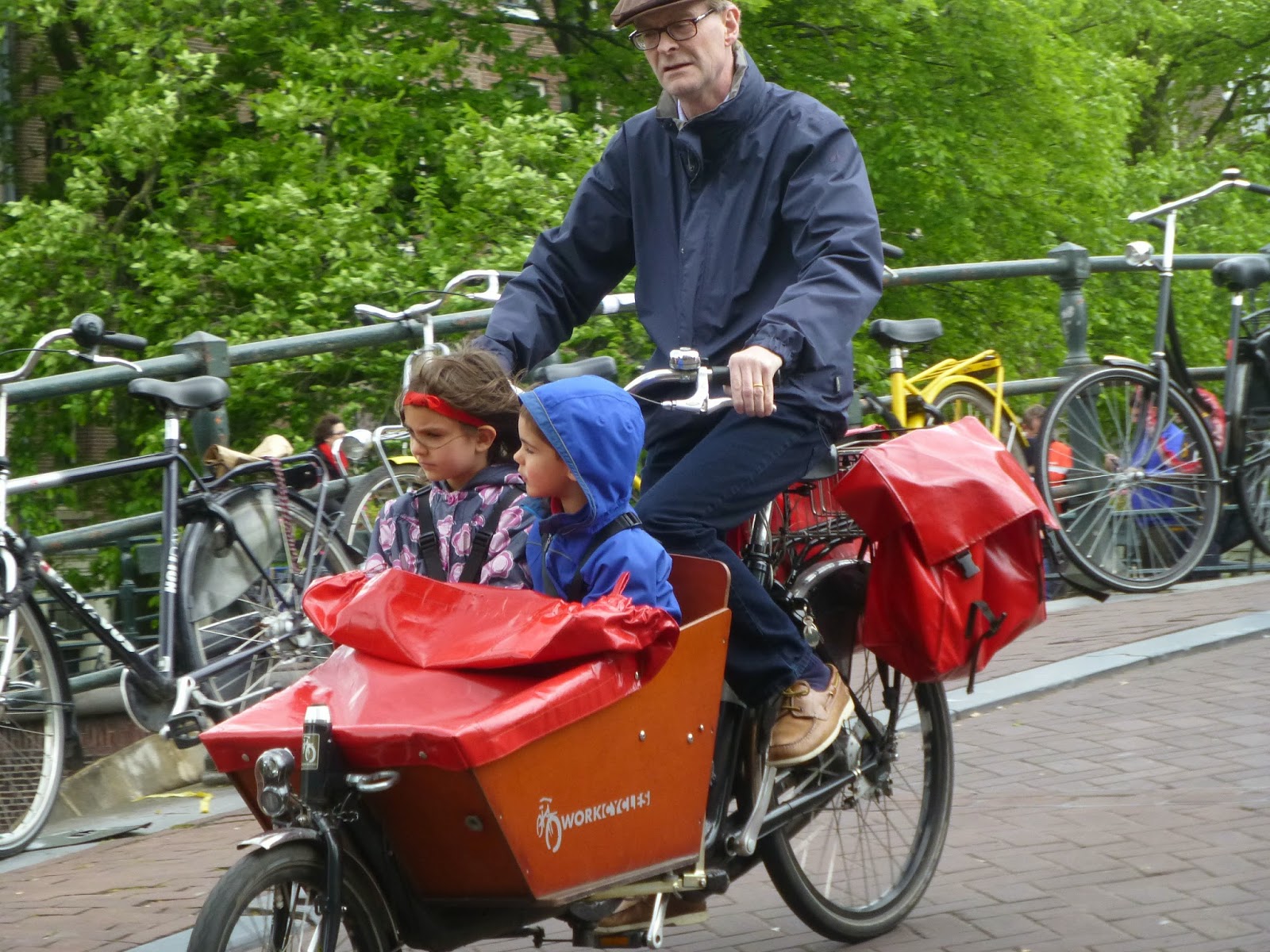 You see men and women dressed in proper office attire riding to work or home. Although most people are very mindful of the rules of the road, there are anarchist bikers who chaotically run red lights, ride against traffic and yet somehow don’t create massive accidents and pandemonium. No one bats an eye. Everybody takes it in stride.

In keeping with the Amsterdamers, Diane and I have been enjoying  riding bikes around the city, putting on lots of miles sightseeing as well as grocery shopping and doing other more mundane tasks by bike.We cycled to the northern part of Amsterdam, to what is called Java Island. On another day we rode along the Amstel. It’s a liberating feeling not being tied to a car or mass transit.

On May 4, we attended a gathering for those who were killed in WWII. There was a two minute observance of silence for those who were executed by the Nazis. The square we went to was one of the places the Nazis would take random groups of people and line them up against the wall and summarily execute them. This was to avenge an act the Dutch had committed against the occupying Nazi soldiers. Frightening to think about.

We met Maarten at the Stedelijk Museum, a museum that focuses on contemporary artists and designs. The two special exhibits were of Canadian photographer Jeff Wall and internationally acclaimed Dutch interior designer Marcel Wanders. Most of the exhibit pieces were truly creative and unusual. 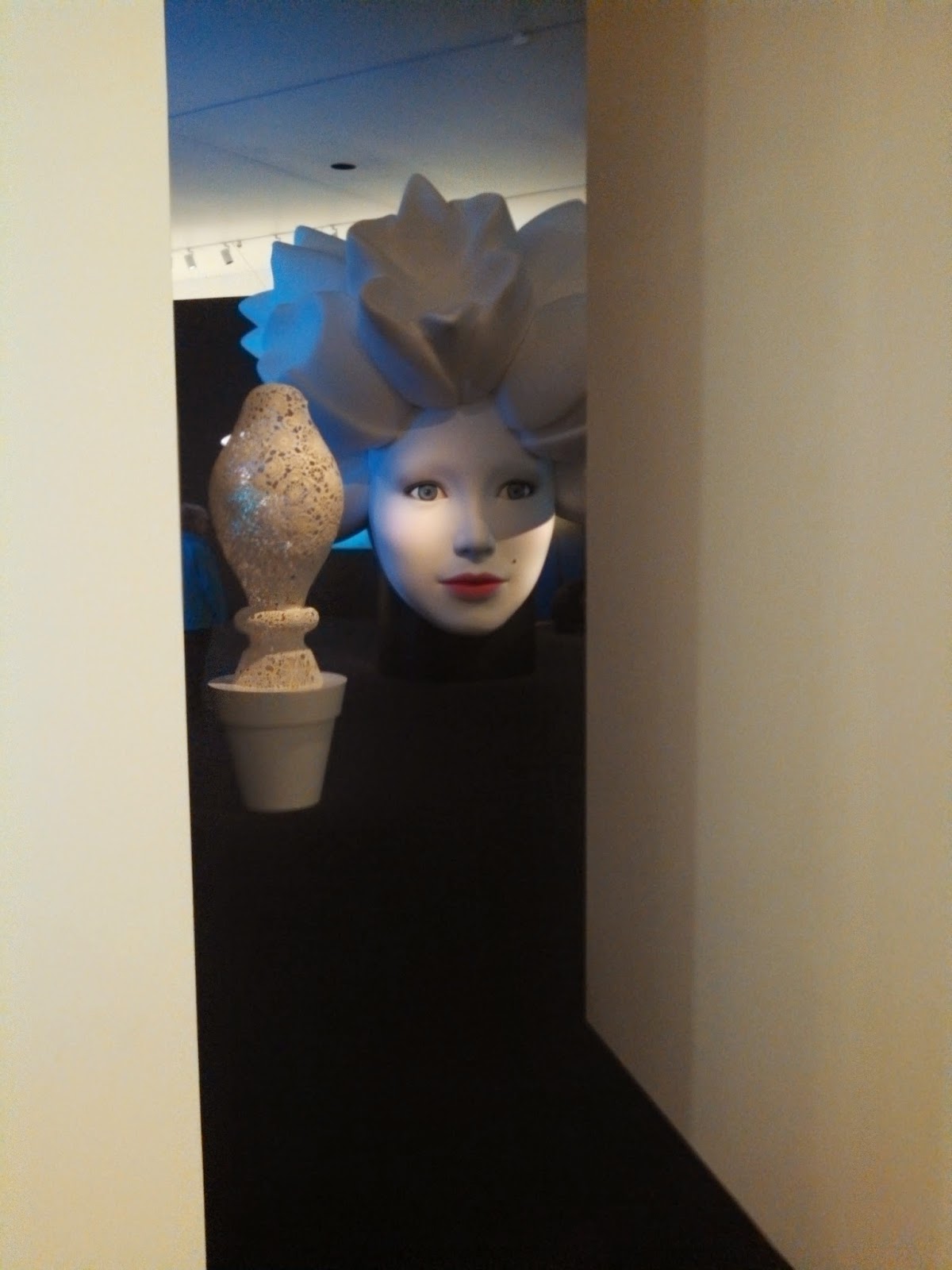 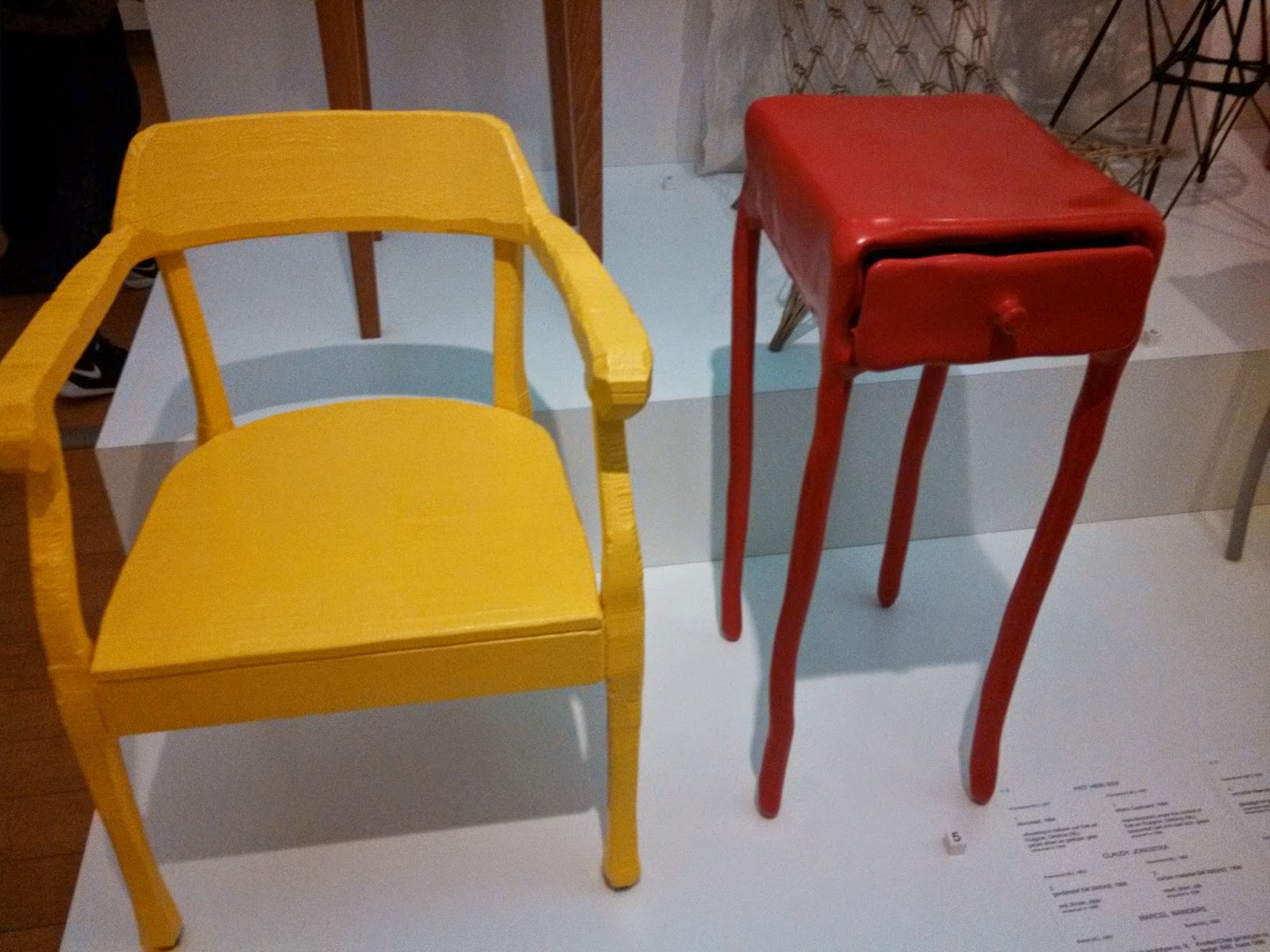 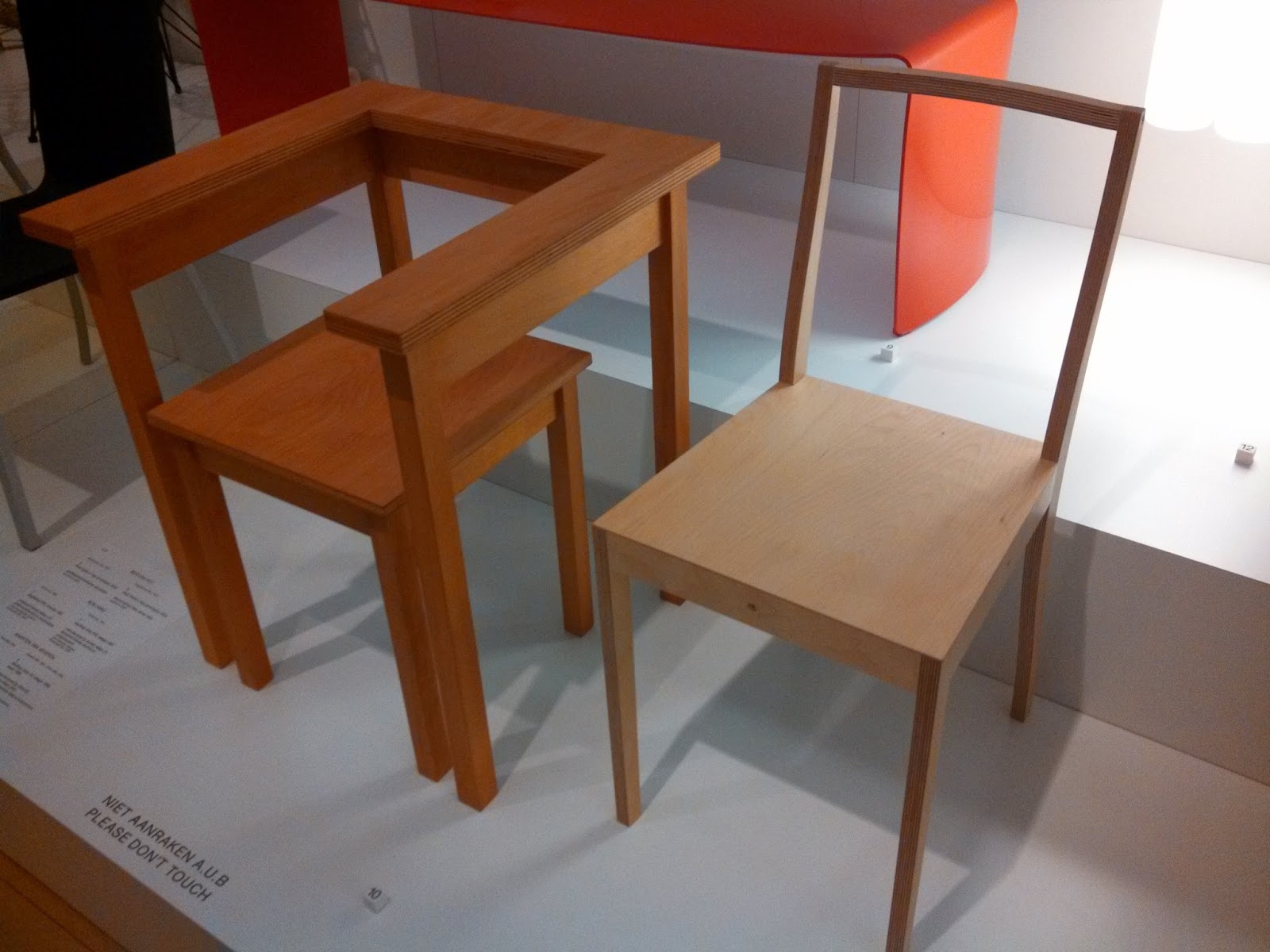 One of the most creative pieces we saw was a work called “The Beanery”, by Edward Kienholz. It is a nearly life-size model of a real bar that existed in Los Angeles. You can walk into the bar and really get the feel of what it was like to be there. But rather than ramble on about it, check it out here on youtube.
Posted by George at 2:16 PM 1 comment: