The scenery on our drive from Swellendberg to Oudtshoorn went from lush farm land to rugged mountain passes and then on to semi-desert land. But once near Oudtshoorn it became more hospitable again. 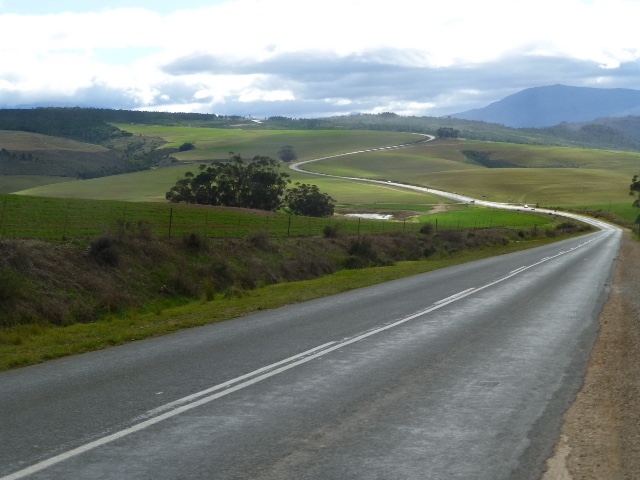 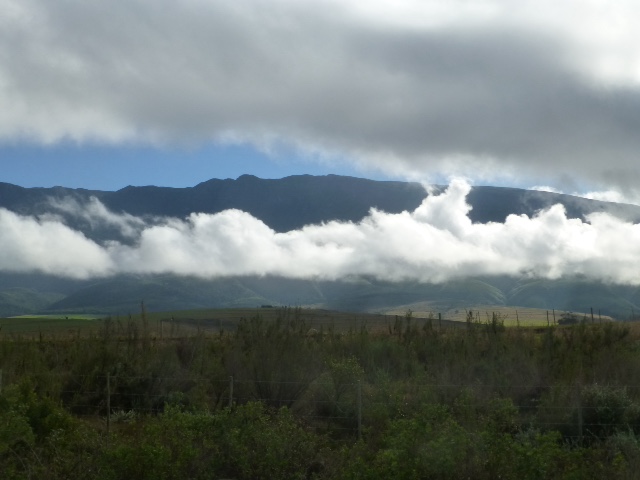 Intriguing cloud formations hung in the valleys we drove through. 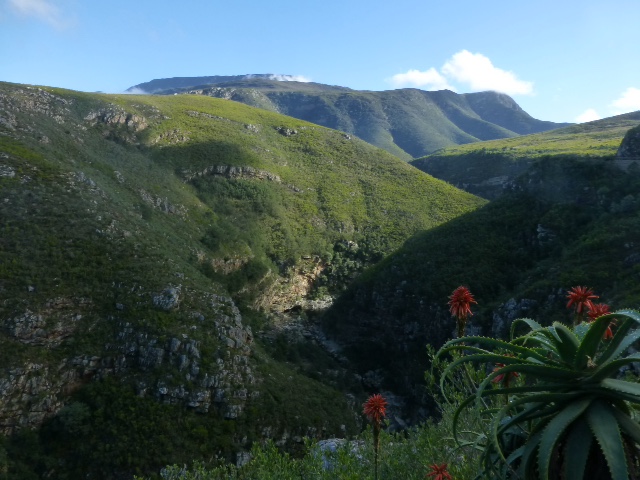 Way down below, a river was busily sculpting its way through this mountain range. 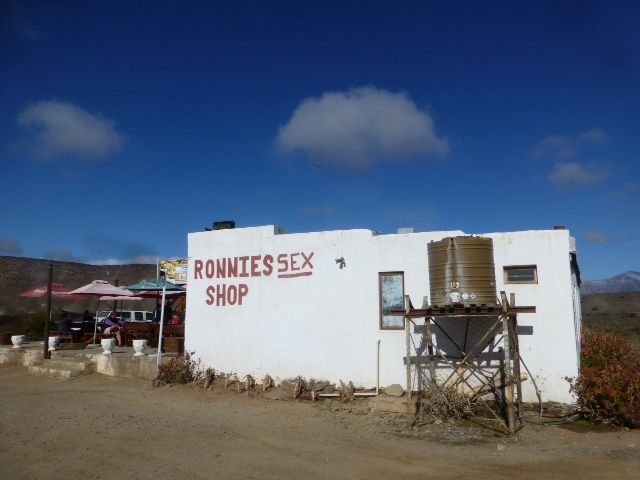 We were told that a must-stop place was "Ronnies Sex Shop". As the story goes, one day, Ronnie needed a few days off from his store called "Ronnies Shop" and asked his friends to watch the shop for him. It was during this time that his rowdy friends got drunk and had a "great" idea of adding the word "Sex" to the shop's name.
Needless to say, people started to stop by to see what the heck a sex shop was doing in the middle of the desert. From then on, it became world renowned. The bar has bunches of bras and panties hanging from its ceiling and the walls are inscribed with people's names.
The result is that the beer and the coffee now cost a lot more than it used to. Damn! But it was a fun visit. 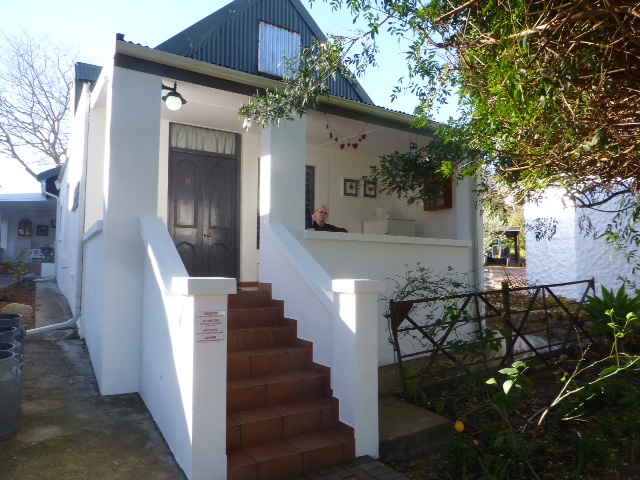 In Oudtshoorn we had our own little cottage at De Opstal. It was a huge, lovely and all white-washed facility with a wonderful, caring staff. For dinner, they recommended the Black Swan because not only were they the best restaurant around, but they offered a shuttle to the restaurant.
It turned out to be an exceptional meal where we had ostrich steak and pork neck, both really tasty. The ostrich didn't taste like chicken at all. It is a red meat that's cholesterol free and tastes like a good cut of beef. Delicious. 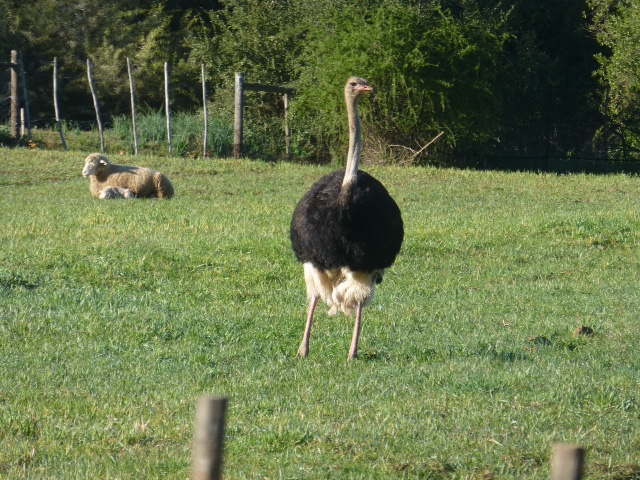 Have you ever seen an ostrich egg? They're huge and they are thick. We wondered how a tiny little chick would peck its way out of such a beefy shell. I spotted this ostrich on the grounds of De Opstal. 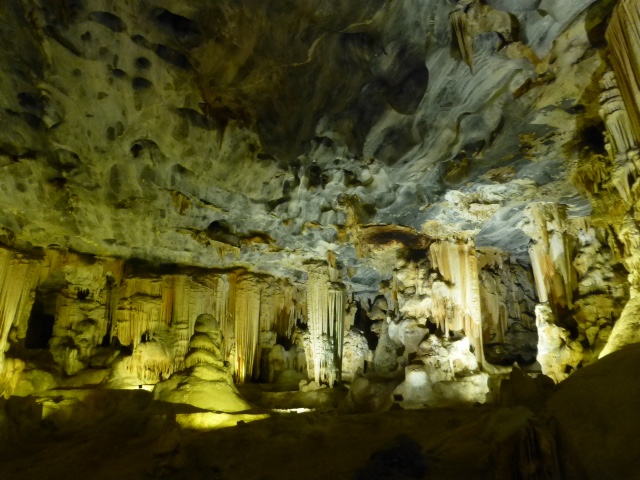 The following day we went to the Cango Caves just down the street from our guesthouse. The cave (actually a series of caves) were discovered in the early 1700's. They run over 5km long. The tour only covers around a kilometer. But it was well worth the time and effort. 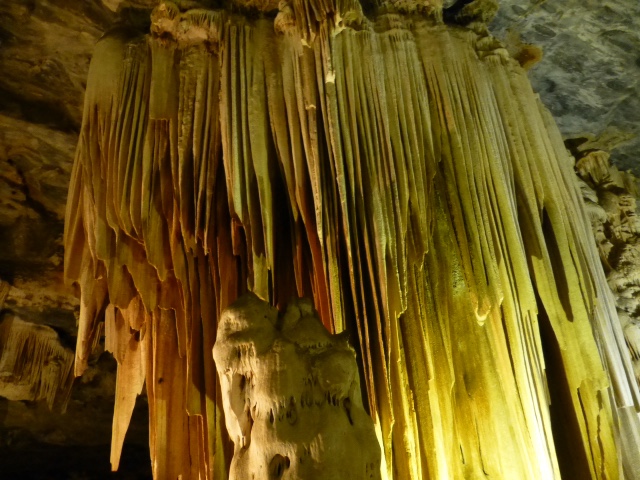 The stalagmites and the stalactites that we saw were ancient, some as old a million years. 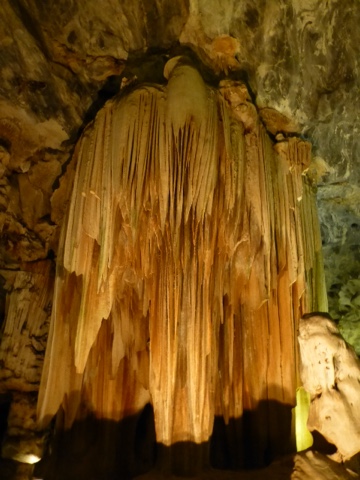 The formations in the caves were very impressive. 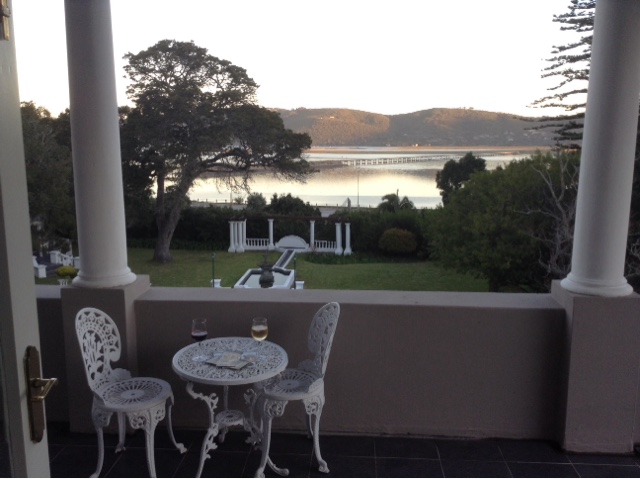 After Oudtshoorn, we drove south to Knysna. The Parkes Manor, where we stayed, was right along the bay. Our room had a balcony with an expansive view of the bay. A perfect place to sip wine in the late afternoon. 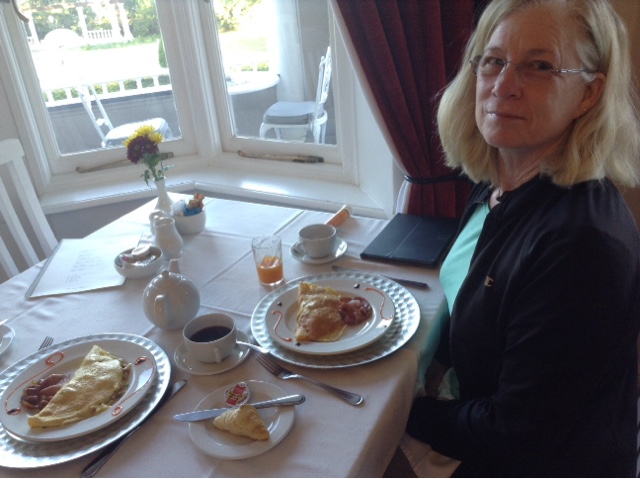 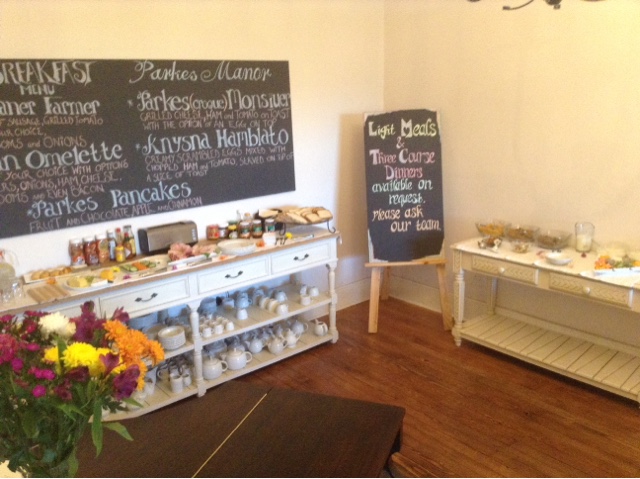 Breakfast consisted of a feast of fruits, yogurts, cheeses, croissants, breads, dried fruits, nuts, cold cuts and juices. That was the beginning. After a course of that, it was a choice of eggs or omelettes. It was all I could eat until dinner. 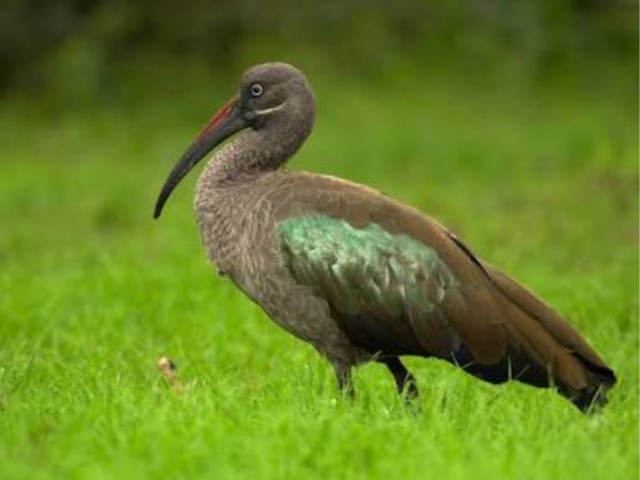 This is the Hadeda bird of South Africa. It's a very noisy bird but only in flight. Otherwise, it's a quiet bird that goes about its work of digging around lawns in search of prawn larvae, that it can pluck out with its long beak. 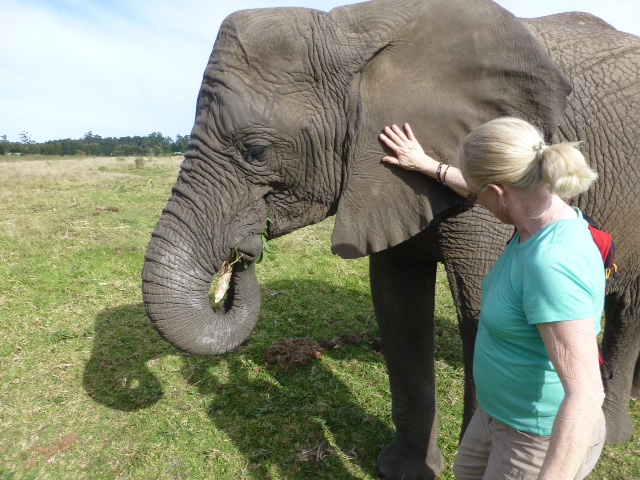 On our second day in Knysna we went to the Knysna Elephant Park, a place where they began to rescue young orphaned elephants in the early 1990's. It's now developed into a reasonably impressive elephant rescue operation.
We took a tour of their facility and got to walk around with elephants and feed them. Guides came along and told us the stories of each of the elephants we encountered. It was pretty special to be able to touch these gentle giants. 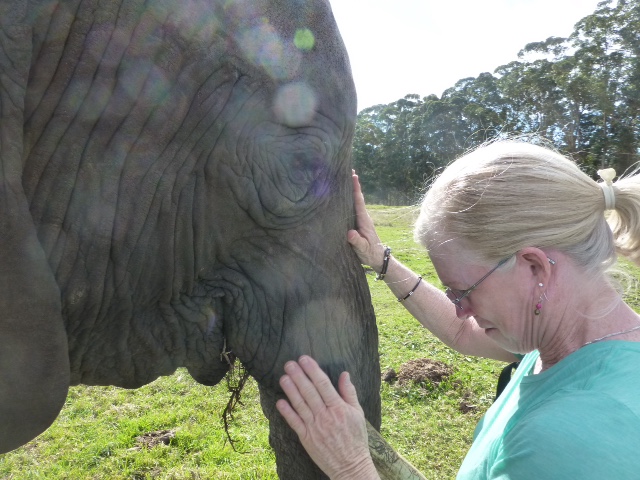 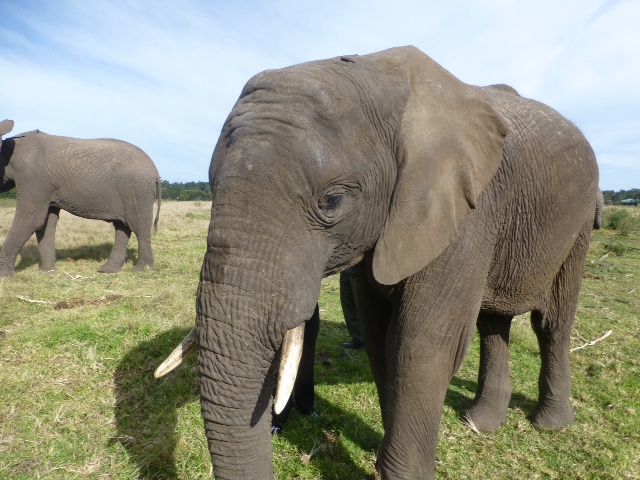 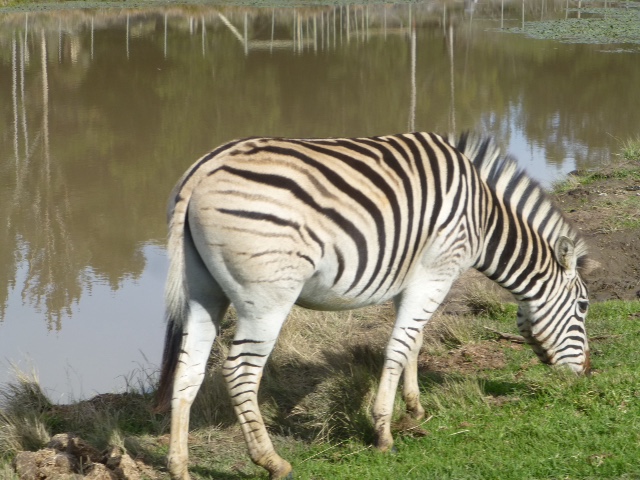 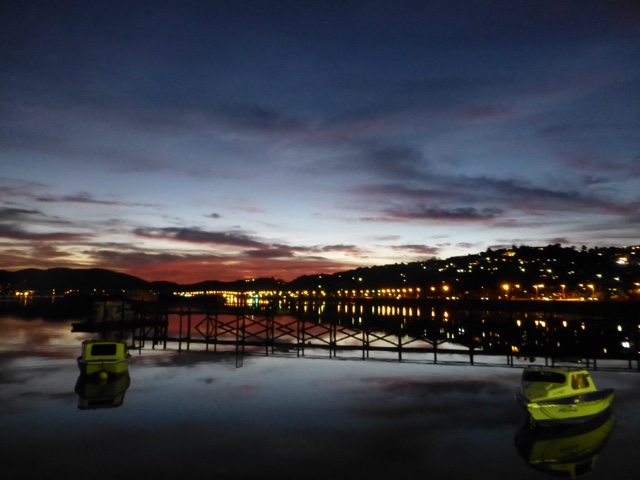 In the evening we went to a local fish restaurant that just happened to be serving a beautiful sunset to finish off a great stay in Knysna.
Posted by George at 1:16 PM No comments: