Knysna, Plettenberg and Wilderness.
NOTE: There are a lot of photos in this blog entry, so it may take a few minutes to load. Relax. Get a glass of wine. 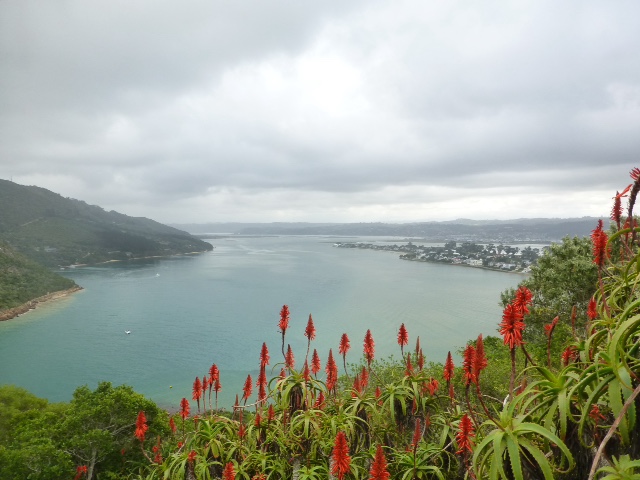 Before leaving Knysna, we took a drive to the mouth of the bay, known as Eastern Knysna Head. There's a short trail there with magnificent views of the bay and the ocean. 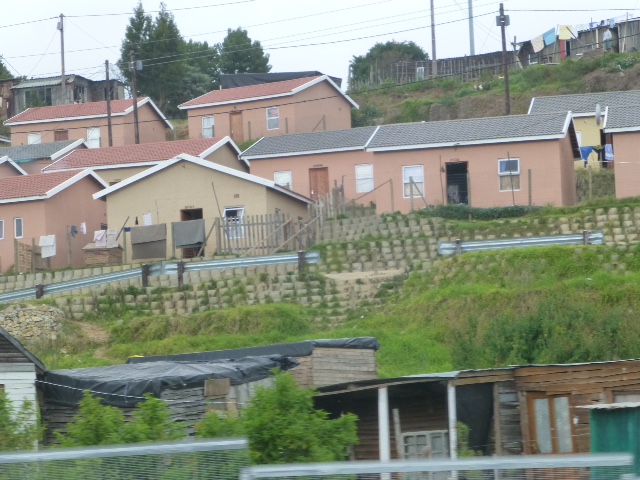 Many South Africans live in shacks on the outskirts of town. In the very foreground are some of those. But they are building upgraded versions of these shown above. The people are deeded the property. 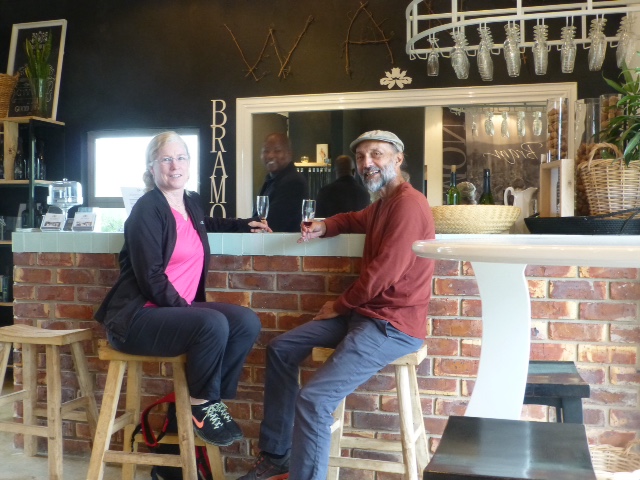 We stopped at one of a handful of wineries in the Plettenberg area. Bramon Winery had a very dry, but delicious bubbly, two Sauvignon Blancs and a very decent Pinotage. 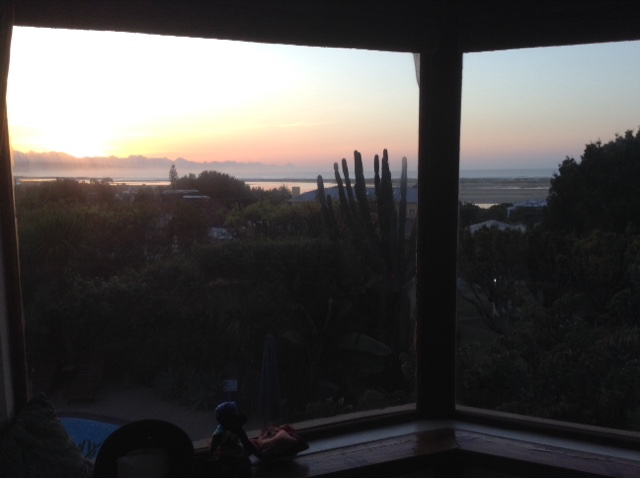 Our B&B, the Whale of a View, offered a beautiful sunrise view from our room. There were only two rooms upstairs. The other room was empty. So we had the entire place to ourselves. 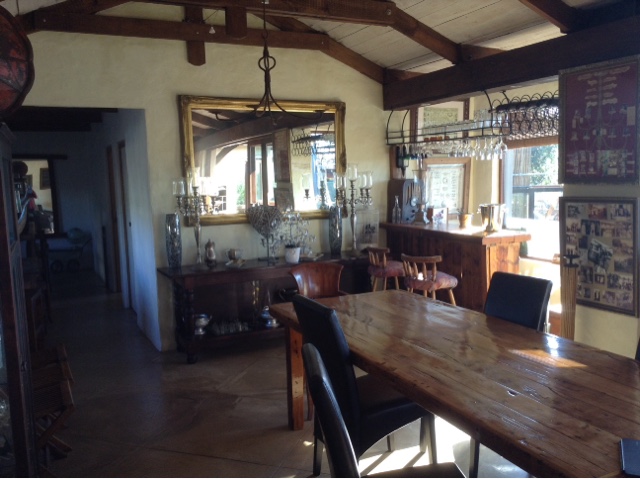 The dining room and bar area. 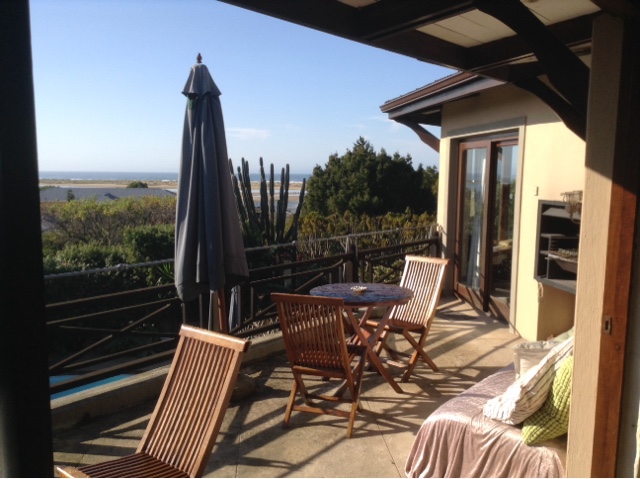 The deck sitting area.
Although the there are lots of things to do in "Plette", our main tour there was Monkeyland and Birds of Eden, both sanctuaries for those types of animals. Monkeyland is a free-roaming sanctuary that is home to over 500 previously captive primates. We walked around the sanctuary with a guide for over an hour spotting and observing monkeys, while he identified them and lectured us about their habits. 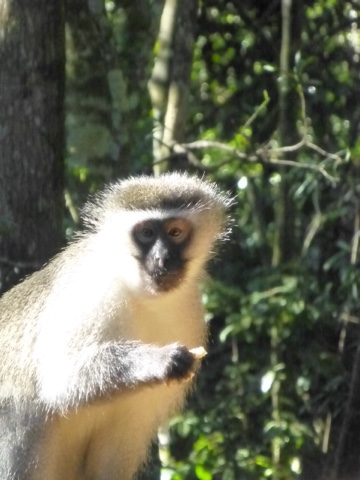 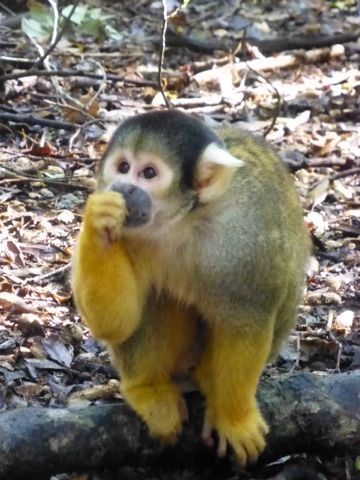 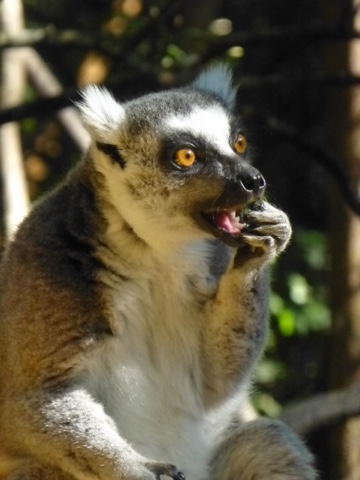 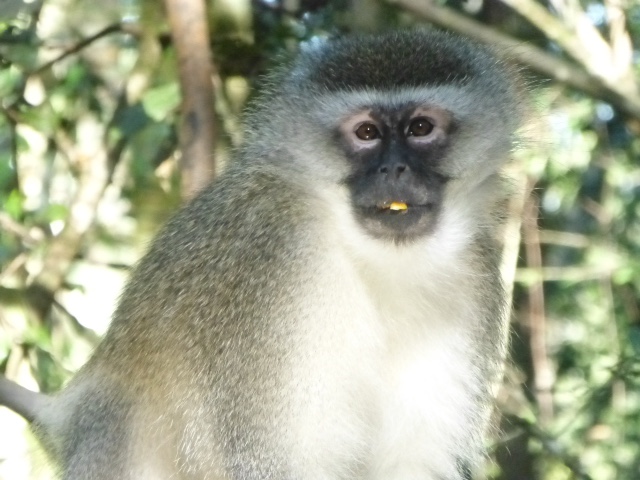 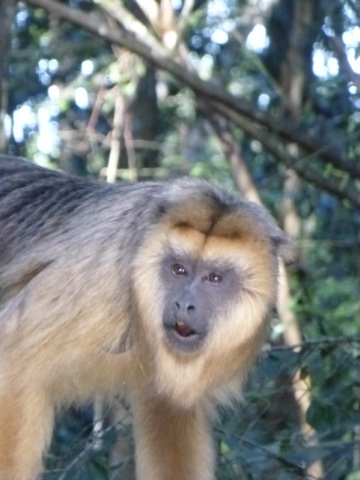 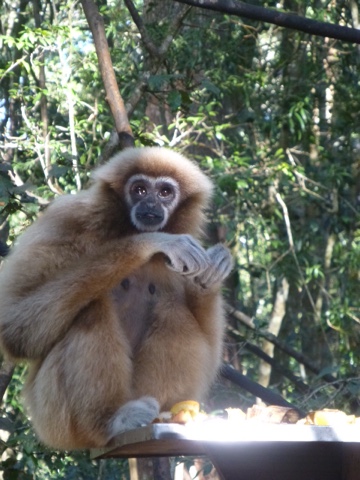 The Bird of Eden sanctuary is a single dome free-flight aviary that has several thousand birds and over 200 species. We spent several hours touring it on our own. With the birds, we got a book that enabled to identify them afterwards. 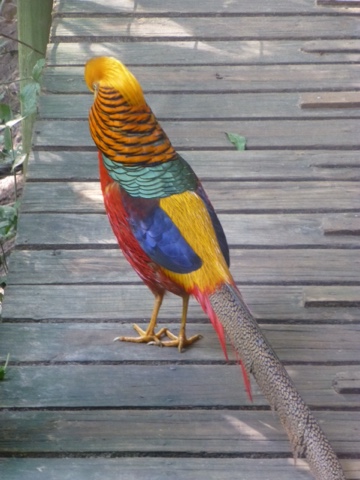 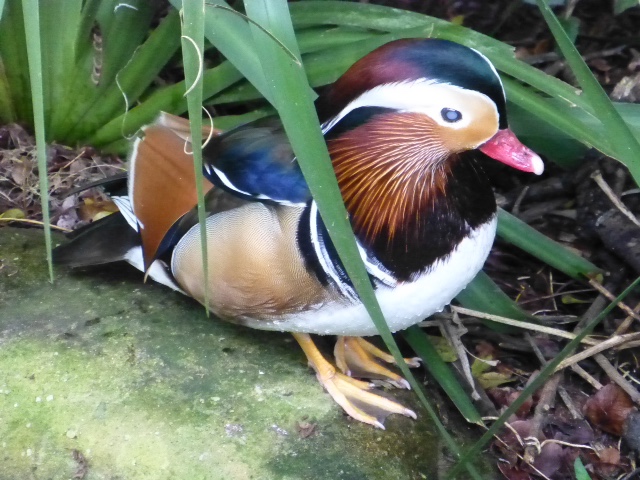 This is a Mandarin duck. Almost looks fake. 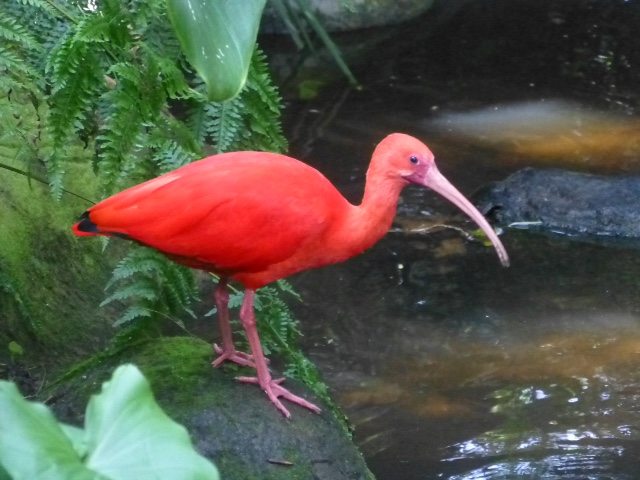 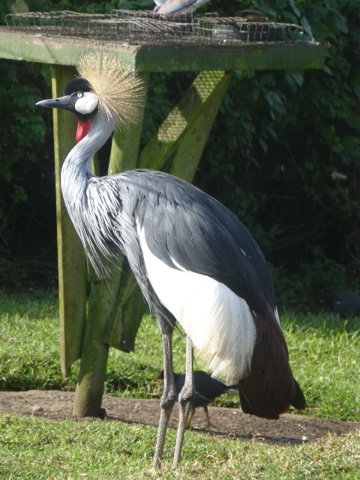 A Crowned Crane.
After a long day at the parks, we ended up at Enrico's for dinner. It's an Italian restaurant right on a spectacular rocky beach. 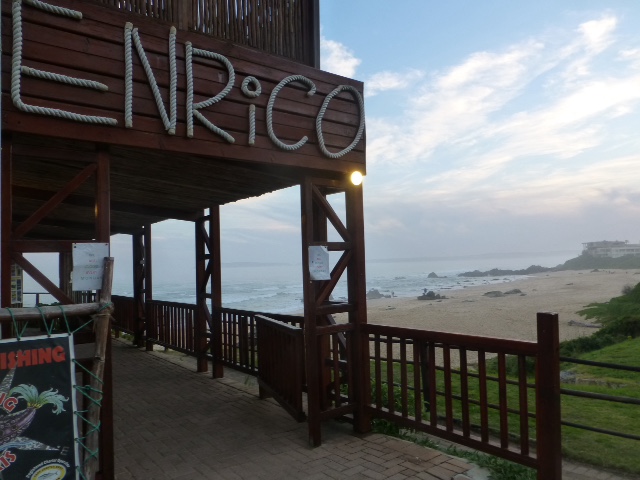 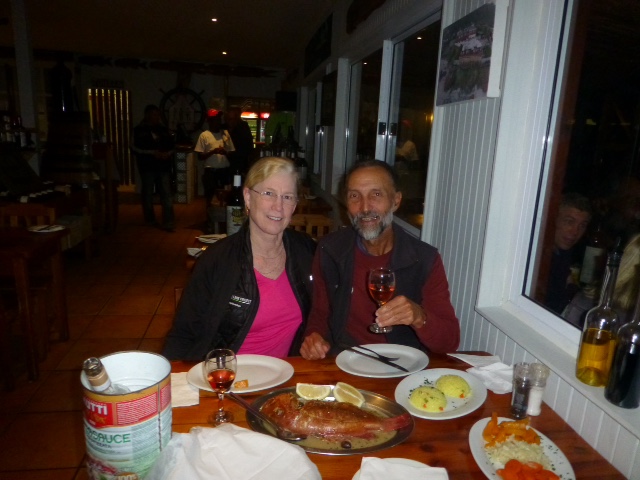 We had a delicious fish dinner accompanied by a dry South African dry Rose. 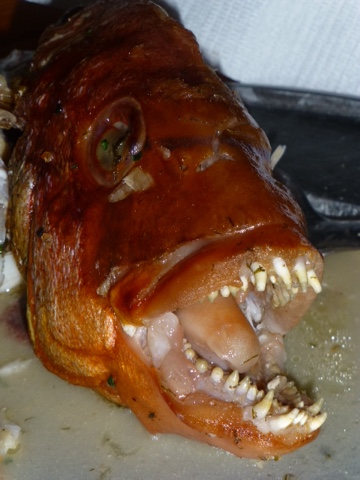 It tasted better than it looked.
From Plettenberg we drove to the small town of Wilderness, mainly because it was near the George Airport, where we would be leaving from in two days. It's right on the Indian Ocean. 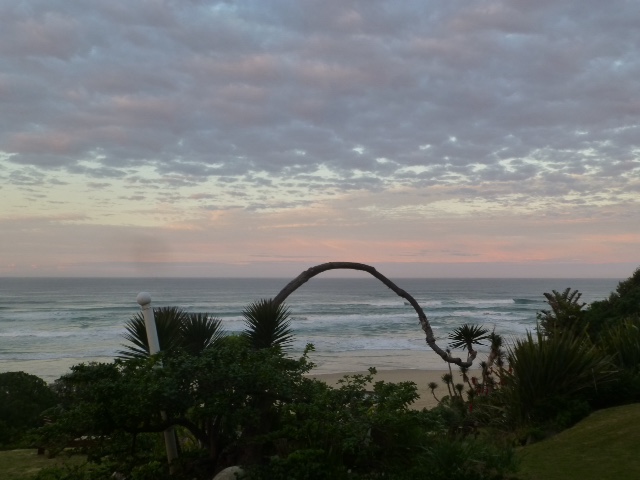 The view from our room was hypnotic. The sound of the constant surf was like music. 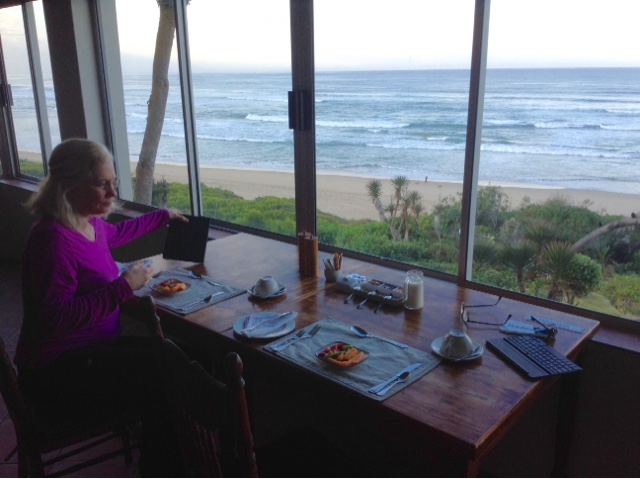 Breakfast was served upstairs, with grand views, of course. 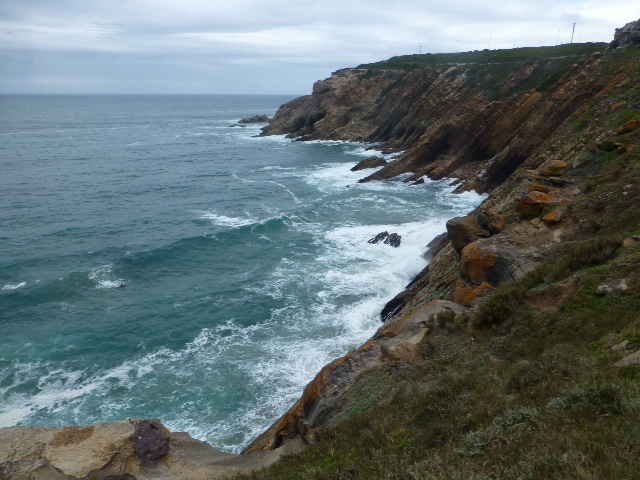 We drove to Mossel Bay, one of the days we were in Wilderness. Nice beaches and a rugged coastline that has an old lighthouse and a beautiful 13km walk. The town is an old Portuguese whaling stop. 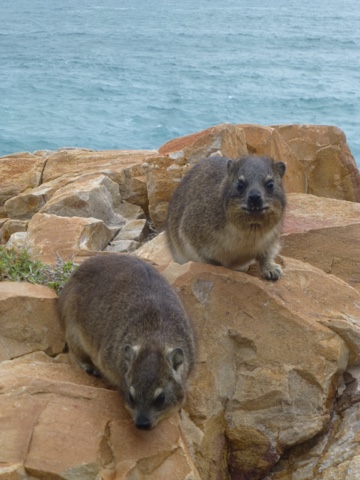 Near the car, the Rock Dassie's were hanging around, looking a handout. These guys were chunky - they're not going hungry. 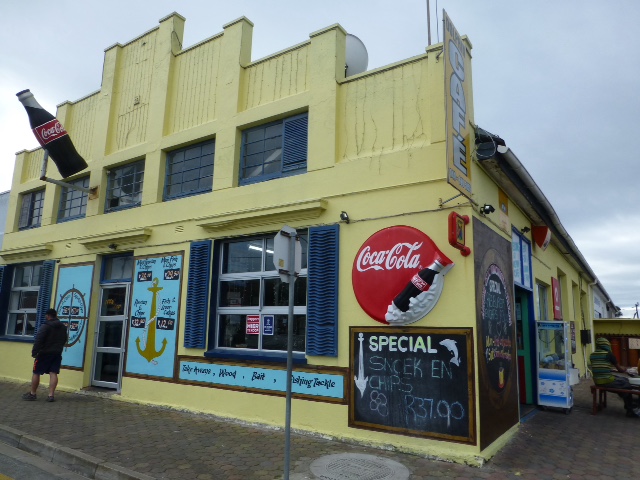 I spotted this classic looking building in town and couldn't resist taking a snapshot of it. There were several second-hand stores in town with lots of interesting (but to-big-carry-back-home) items for sale. 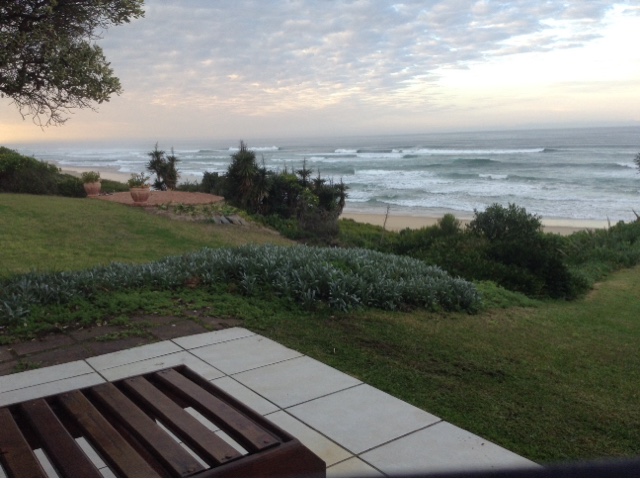 On the morning of our departure to Durban, we got our last glimpse of a morning sunrise from our room before heading out. 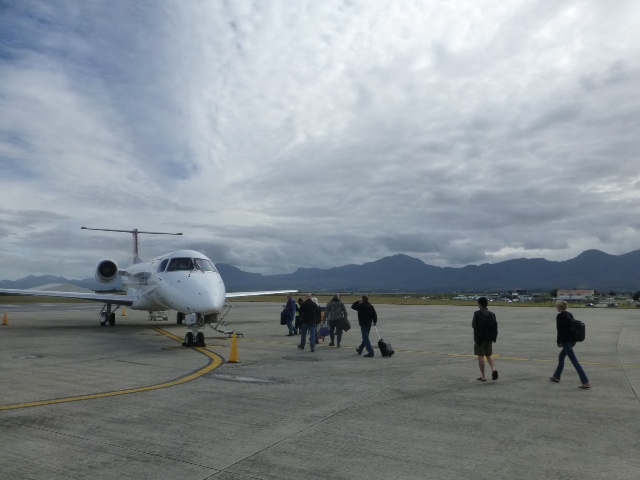 Last view of the surrounding mountains at George Airport, as we board our flight to Durban.
Posted by George at 11:59 AM 2 comments: