For years, Diane has been wanting to work at an AIDS clinic in Africa.  Finally, last year she signed up to volunteer in the northeastern area of South Africa in St. Lucia. Diane’s three weeks of volunteering mostly consisted of making home visits to Zulu families. This is her account of the experience.

Although my expectation was to work in the clinic, I soon realized that the greater need was making home visits. I set out every day with Swele, my Zulu translator, visiting homebound patients. Also, I facilitated women's support groups, which I enjoyed very much. We covered topics that the women choose, such as stress, Hepatitis B and C, and getting good sleep.

I appreciated being able to see the home situations and environments to better understand the day-to-day barriers the Zulu face in obtaining health care (or water or food). I saw several patients a day, traveling to one of three villages, with very poor dirt roads, which they call “African massage”. The Zulu are so appreciative of any and all help. I visited a few families where only the "gogo" (grandma) lives with 4-9 grand- and great grandchildren. Her adult offspring and their spouses are frequently dead (most commonly from AIDS). These older women have multiple health problems and cannot travel to the clinic. With each visit, we bring a small bag of much needed, greatly appreciated food. For some, we also bring water from the government watering holes several kilometers away.

Below is a photo of 18 month-old twins. One of the boys has “floppy legs” - no lower extremity muscle tone. He does not use his legs. One twin is walking but this one (on the right) is barely crawling. The other children in the home are adorably helpful in carrying him around the yard as they play. However, we had to ask them to stop carrying him and encourage him to move his legs. The Physiotherapist has now seen him and will refer to Occupational Therapy, for more therapy, but we are seeing a little improvement already. In the photo I'm trying to get him interested in grabbing and playing with his toes. He watched his brother do it, but he is not interested - YET! By the way, the mother of these twins was HIV +. She received appropriate anti-viral medication to prevent HIV from infecting her sons. But as it happens all too often, she struggled with side effects, stopped the drugs and died just the week before I came. The boys will join his cousins living with Gogo. 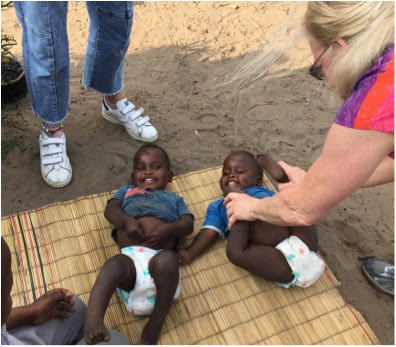 The photo below is of a “gogo”. She lives with her daughter and this boy, who is her grandson. We were visiting the daughter who is in her 30's. She has HIV and tuberculosis. The tuberculosis (TB) she has traveled from her lungs into to her spine, crippling her. We were checking on her medication supply for the TB. 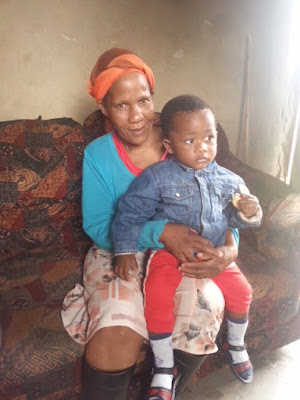 The three of them live in a home the size of your bedroom. The kitchen is an outdoor fire pit and the toilet is an outhouse. This gogo makes beaded jewelry to sell at the market for a little extra money. I bought bracelets from her for my nieces. Their clothes are mostly donated from the previous volunteers. I left many of my clothes behind as well.

After Zulu children finish high school, their only option is to get a job, if they are lucky. The university is far away and only the very, very brightest students get a scholarship to pay for tuition. But since they cannot afford the living expenses, they often still cannot attend. Educational and economic apartheid survives. 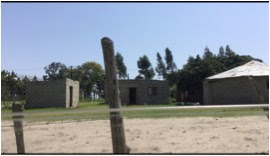 I visited a grandma who cares for these grandchildren (below). This grandma has metastatic cervical cancer that has spread to the intestines. Unfortunately, she too has HIV. She will not survive. But fortunately these children have at least one living parent.  (Yes, that is her home in the background.)

It was wonderful to put my previous (rusty) home health care experience back to work. 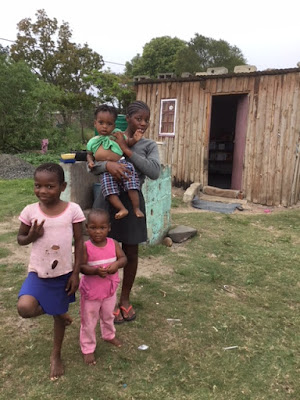 Below is Shwele, my translator. Shwele asked the woman at the banana store (the next photo down) if I could take a photo. She said yes, but at the last minute turned away from the camera. The Zulu (although mostly Christian) believe that taking a photo will steal your spirit. 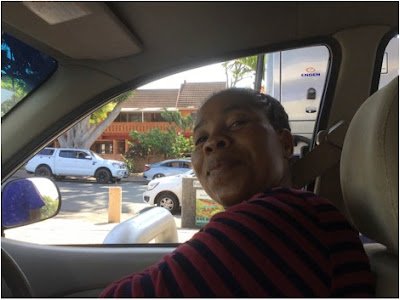 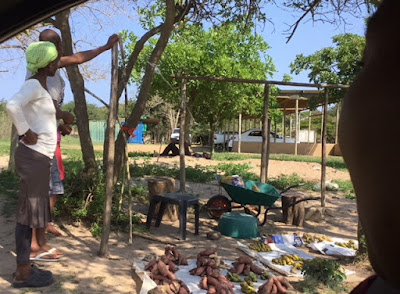 My experience in St Lucia definitely was memorable. It supported everything I have read all these years about the HIV epidemic in Sub-Saharan Africa (the good and sad). Although I fulfilled a life time dream, I am unconvinced I can check it off the list. I may need to go back. I’ll keep you posted.

Posted by George at 7:35 PM No comments: 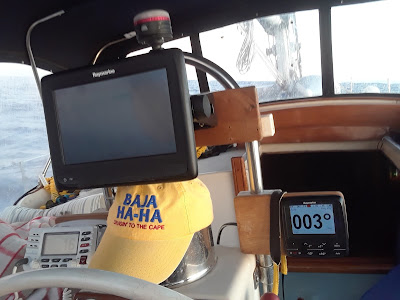 It's one thing to sail south with the winds along the Baja coast. It's an entirely different scenario when one has to backtrack and sail north against the wind and current. That, however, is the reality of the Baja Ha-Ha they don't tell you about (but we had a strong suspicion it wasn't going to be pretty).

To rejoin the boat, I took a very early flight from San Luis Obispo to SFO and from there to Cabo San Lucas. Everything went like clockwork - amazing.

I should mention one more thing. Unfortunately, my camera stopped working before this segment of the trip. Thus, the photos in the blog are not of the usual clarity since I had to resort to my Samsung phone.

Also, should you be interested in watching a couple of brief videos of sailing, you can find them here. 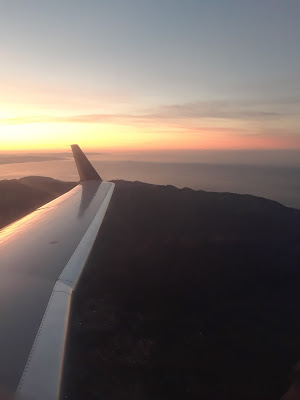 When I arrived at Puerto Los Cabos, Dave, Doug and Skip were eager to get going. They had been waiting for me for several days.

Before departing we made a last stop at what had been our favorite restaurant - El Marinero Borracho - the Drunken Sailor. We had fish tacos and a Corona. Soon afterwards, we were shoving off the dock and motoring past the Puerto Los Cabos breakwater. It was 4:15pm.

By the time we had Cabo San Lucas in our sights, it was dark. But the skies were lit up with the city lights and a full moon. We continued past Cabo San Lucas and rounded Cabo Falso, beginning our trek north. 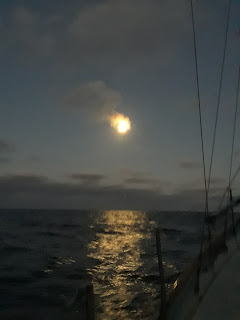 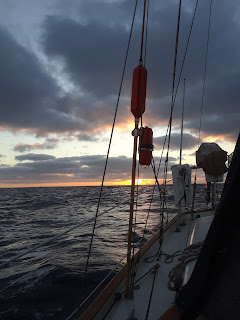 We motor-sailed days and nights. The wind mostly blowing from the northwest during the day clocking to the northeast in the evenings. One night we encountered offshore winds that gusted to 30 mph with choppy seas. The bow of Lahaina Roads would launch up in the air, then summarily crash into the sea.

Up in the bow of the boat, known as the v-berth, Skip was trying to sleep. Part of the time he would be launched into the air, then momentarily becoming weightless, before being pressed hard into the bunk. How he managed to get any sleep like that, I'll never know.

During the evenings, starting at 8pm, we took shifts of one hour each. That meant when you done with your shift, you had three hours off in which to get some sleep. My shifts were at 10pm, 2am and 6am. Oddly enough, by the morning I felt pretty well rested and ready for a pot of coffee.

These photos below are of some of the spectacular sunrises and sunsets we were treated to. 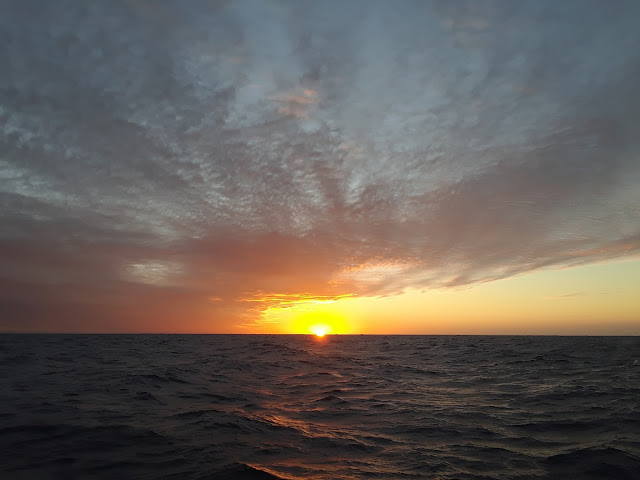 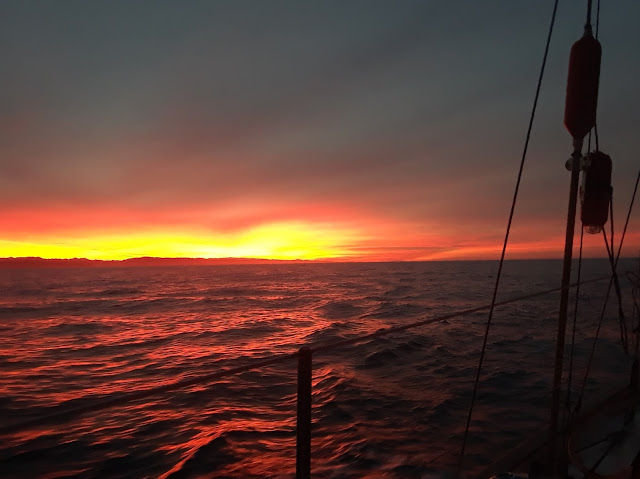 We managed to make good about a hundred nautical miles per 24 hours. After considering a brief stop in Turtle Bay, we opted to continue since it was night time and our anchoring gear was malfunctioning. No sooner had we past the entrance to Turtle Bay when the wind began to strengthen. It continued to do so until it was blowing a steady low 30 knots with gusts of wind up to 45 knots.

Fortunately, we had decided to put in a double reef in the main. We unfurled only a small portion of the headsail. The wind blew all night, making sleeping nearly impossible. The boat would launch up in the air and then bury the bow in the oncoming wave. White water often would reach over the entire cockpit dodger. What had been a bit unnerving at first, we soon got used to.

The next day it blew nearly as hard from northeast, but it was sunny and it provided a perfect course for Ensenada, 235 nautical miles away. That evening, after we had thought the worst to be over, the wind picked right back up. Initially, it remained in the mid-thirties. But by 10pm, when my hour-long shift began, Dave alerted me to the fact that the winds had strengthened to the mid-forties, with continued gusts to the mid fifties. The ocean appeared angry with frothy white wave caps breaking all around us.

We furled up the jib and were relieved we had left the main with a double reef. The wind stayed strong throughout the night, abating slightly as the night wore on. And by morning, as the sun was rising, the wind was blowing a mere 35 knots, a strength, that we now considered to be comfortable.

The rest of the trip to Ensenada was pretty uneventful, as the wind subsided and the seas became calm. We pulled into the Coral Marina at 10:30 in the morning. 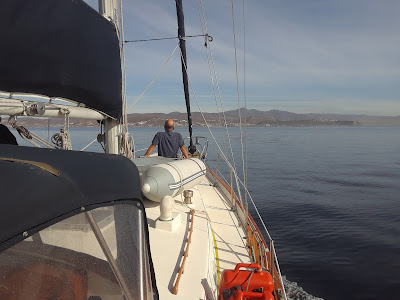 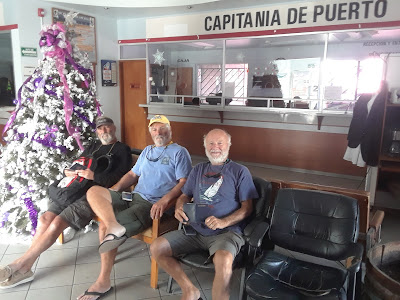 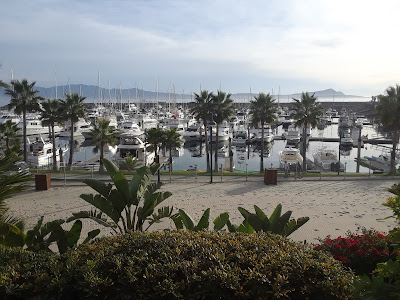 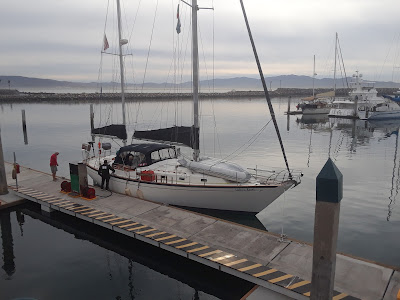 Once we were docked and in communication with our wives, we found out that Oceanside and Santa Barbara county was on fire, due, in part, to 100 mph Santa Ana winds. In fact, Skip's wife had been ordered to evacuate from their home in Oceanside. Apparently, we had gotten the remnants of those Santa Ana winds out at sea, fifty miles off shore.

After dealing with the necessary port formalities, we got back to the boat and relaxed with a Corona or two, which in the evening turned into scotches and dirty martinis. We ended the evening with a white tablecloth dinner at the marina restaurant - a lovely end to several days of excitement at sea.

The rest of the trip - pulling into San Diego to check in with U.S. Customs and Immigration, and a full day of motoring to Oceanside were uneventful.

We pulled into Dave's slip at the Oceanside Marina at 4pm. It concluded our Baja Ha-Ha cruise, an adventure, I don't think any of us will soon forget.

Just to give those of you who aren't familiar with what a sailboat looks like down below, here are some photos. Not shown, is the aft cabin with its private head.

Posted by George at 5:17 PM No comments: