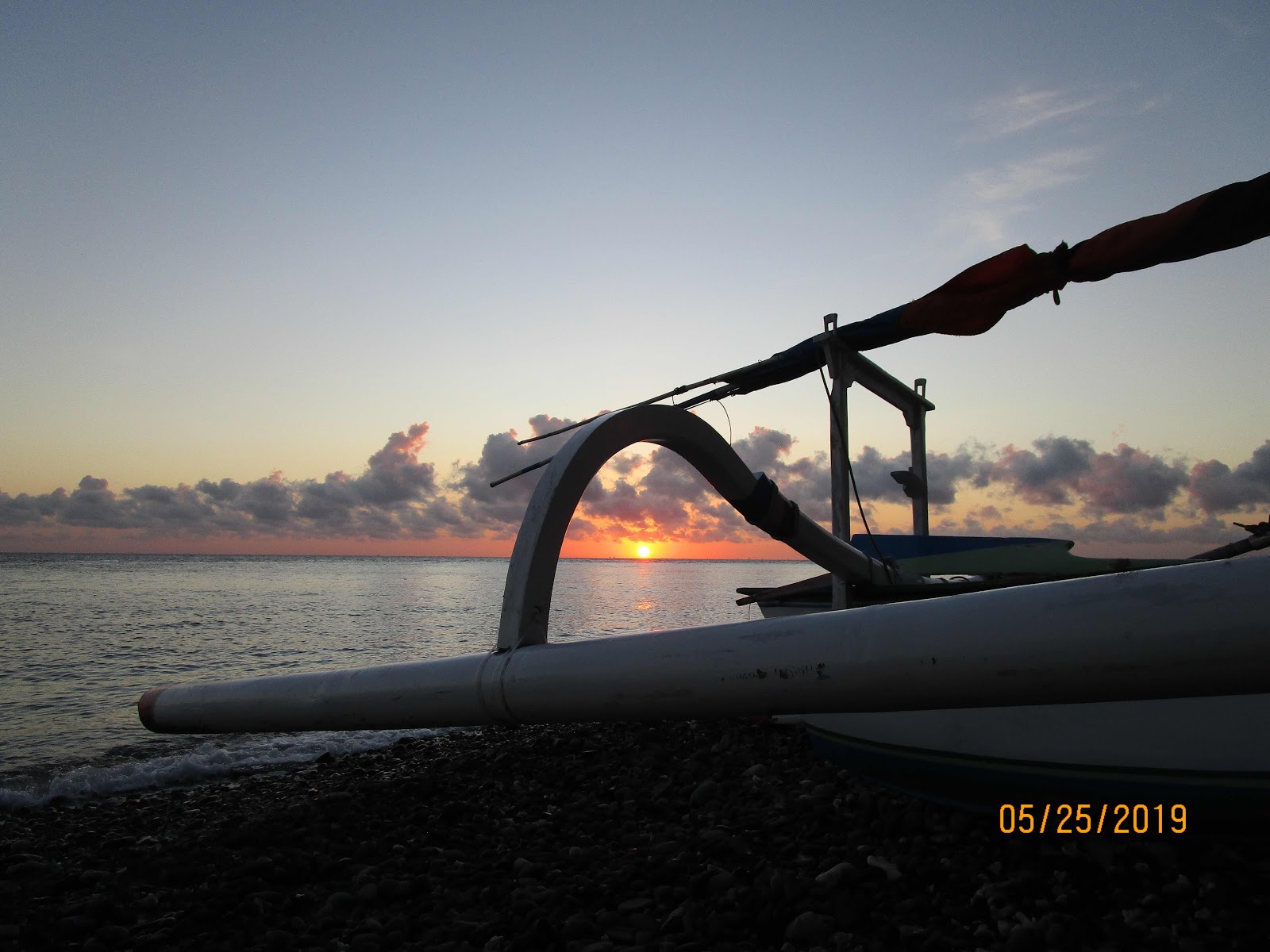 As the crow flies, Amed is not that far from Ubud. But driving there is another story. Our driver, Nyoman, suggested a couple of stops along the way - the Goa Lawah temple (otherwise known as the bat cave temple) and Tenganan, a unique and traditional village. 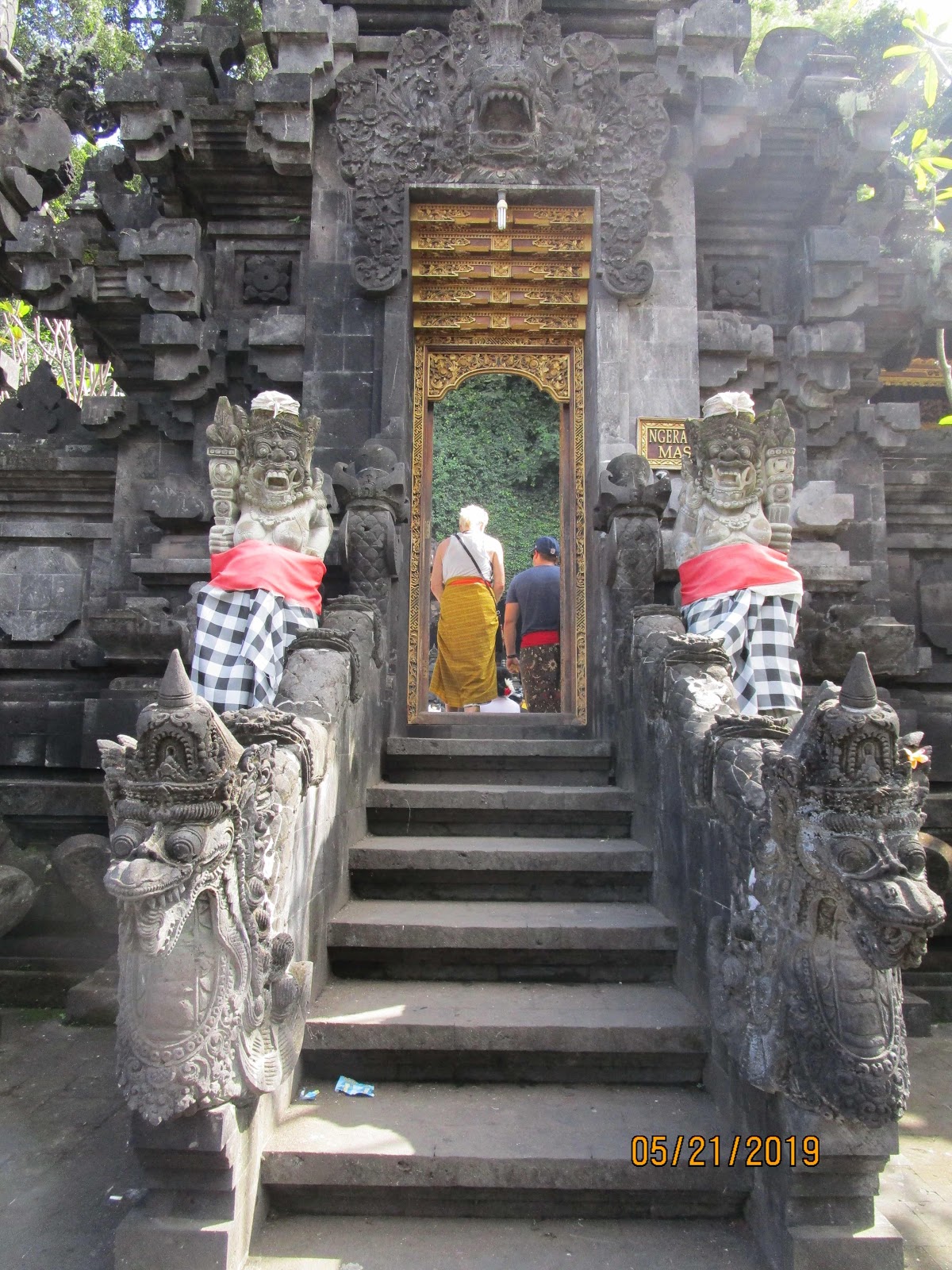 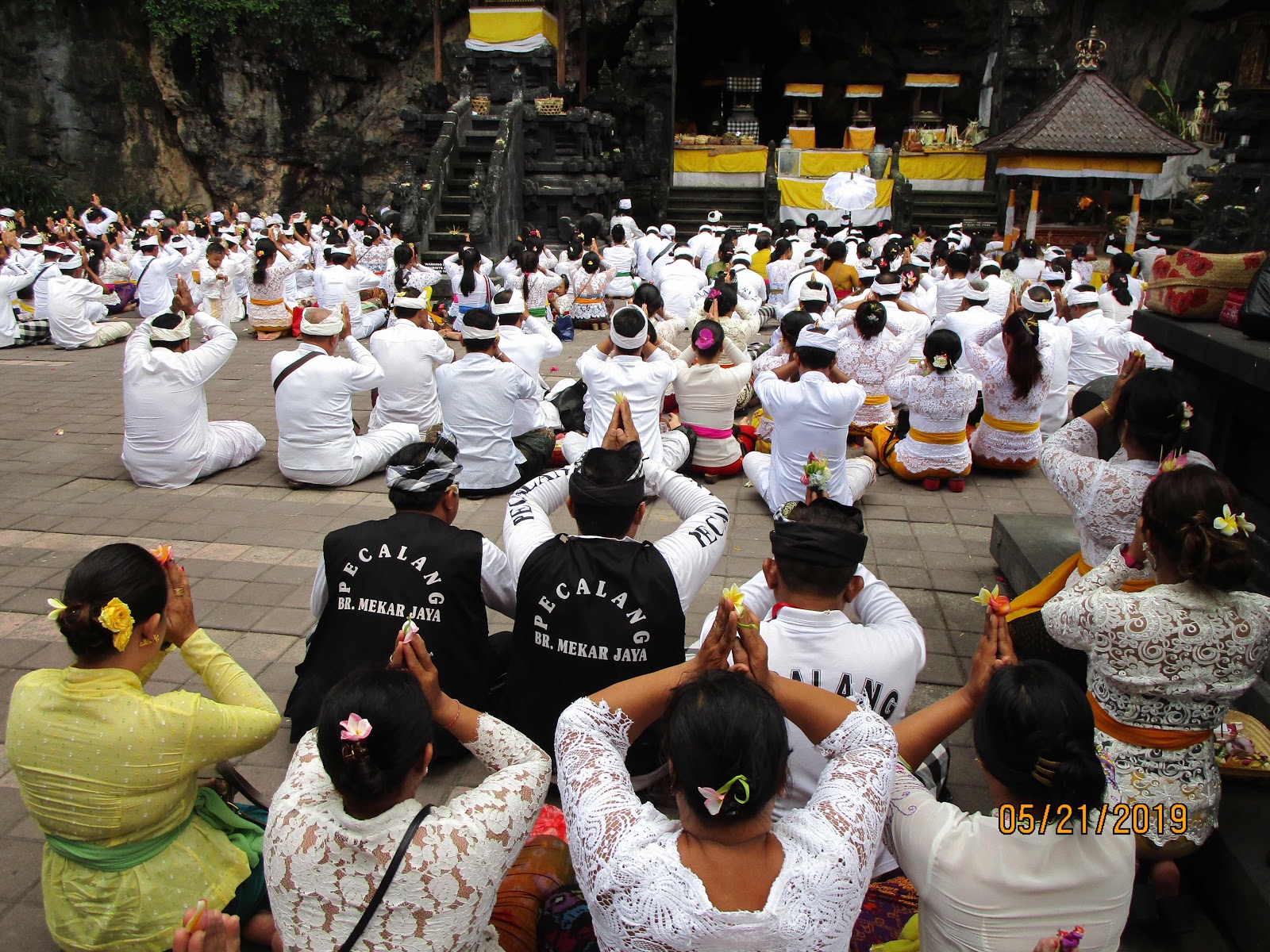 We were fortunate to be at the bat cave temple when a cremation ceremony was taking place. 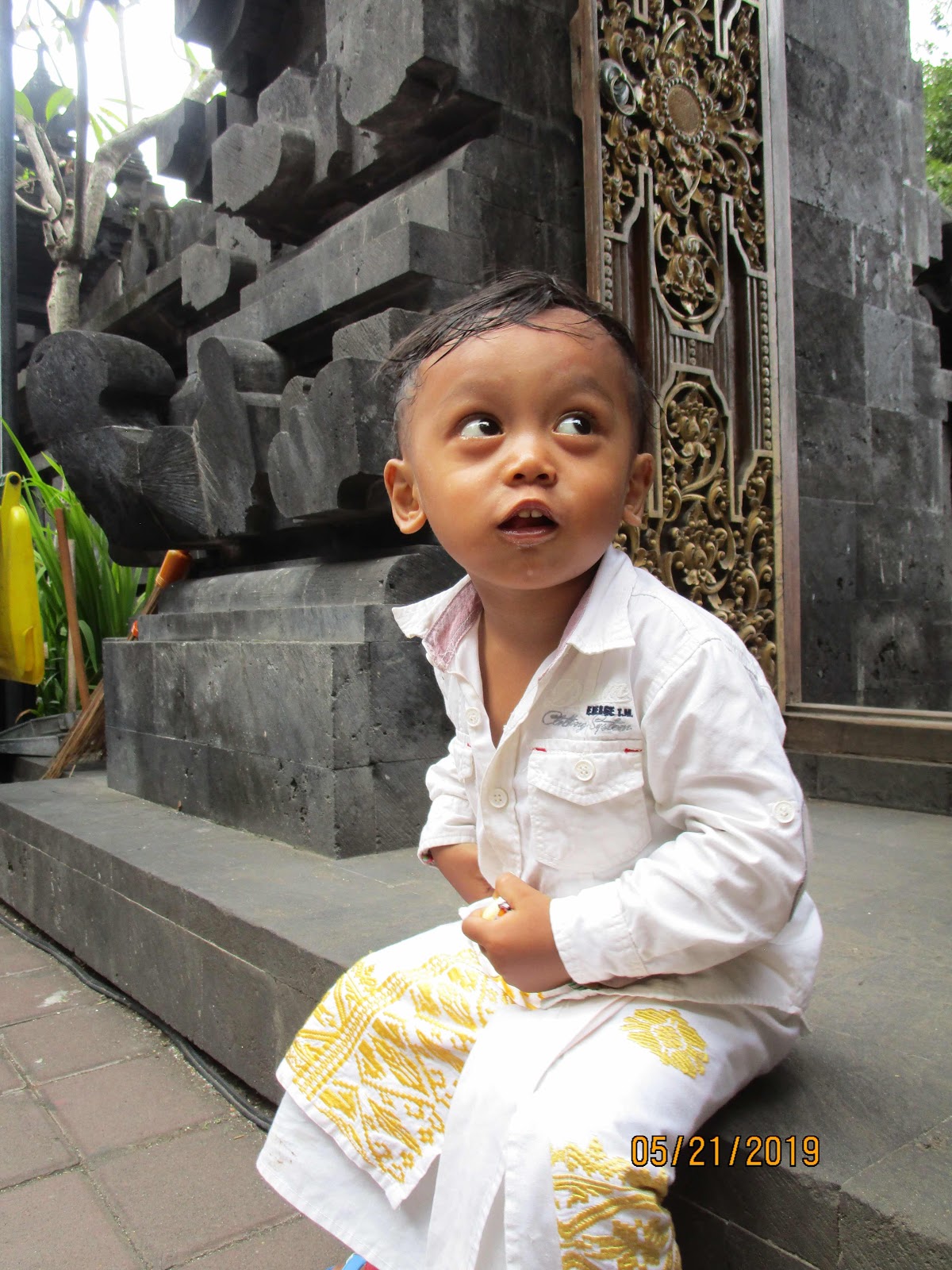 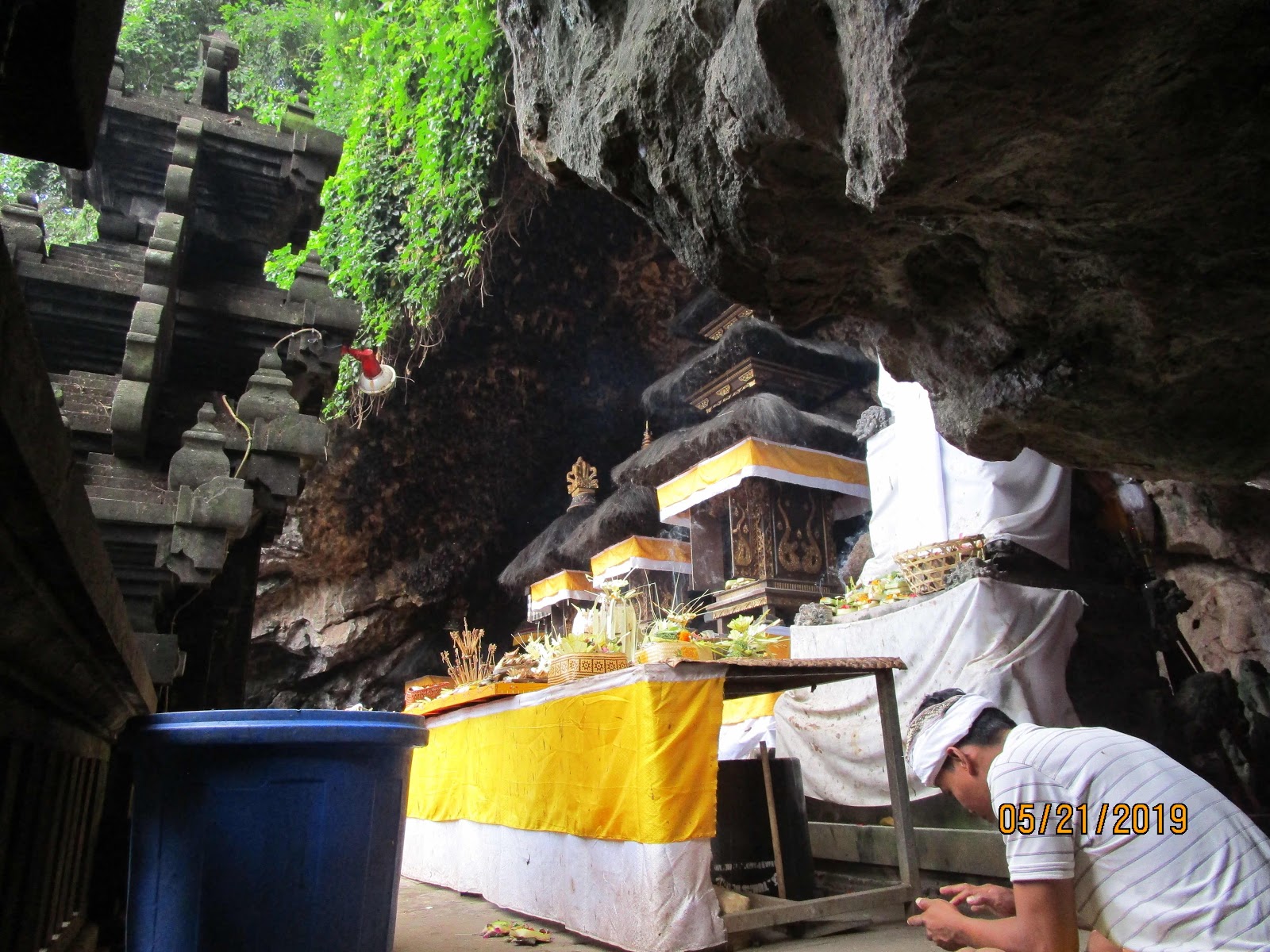 It’s difficult to see, but the inside of the cave (by the greenery and elsewhere) is full of bats hanging upside down.

Tenganan is a village that has not changed much over the years. People live simply, mostly involved in crafts such as wood carving, weaving and hand painting on bamboo sheets and on egg shells. Nyoman also told us that should a villager decide to leave the compound, they are no longer welcome to return - it’s a one-way trip. 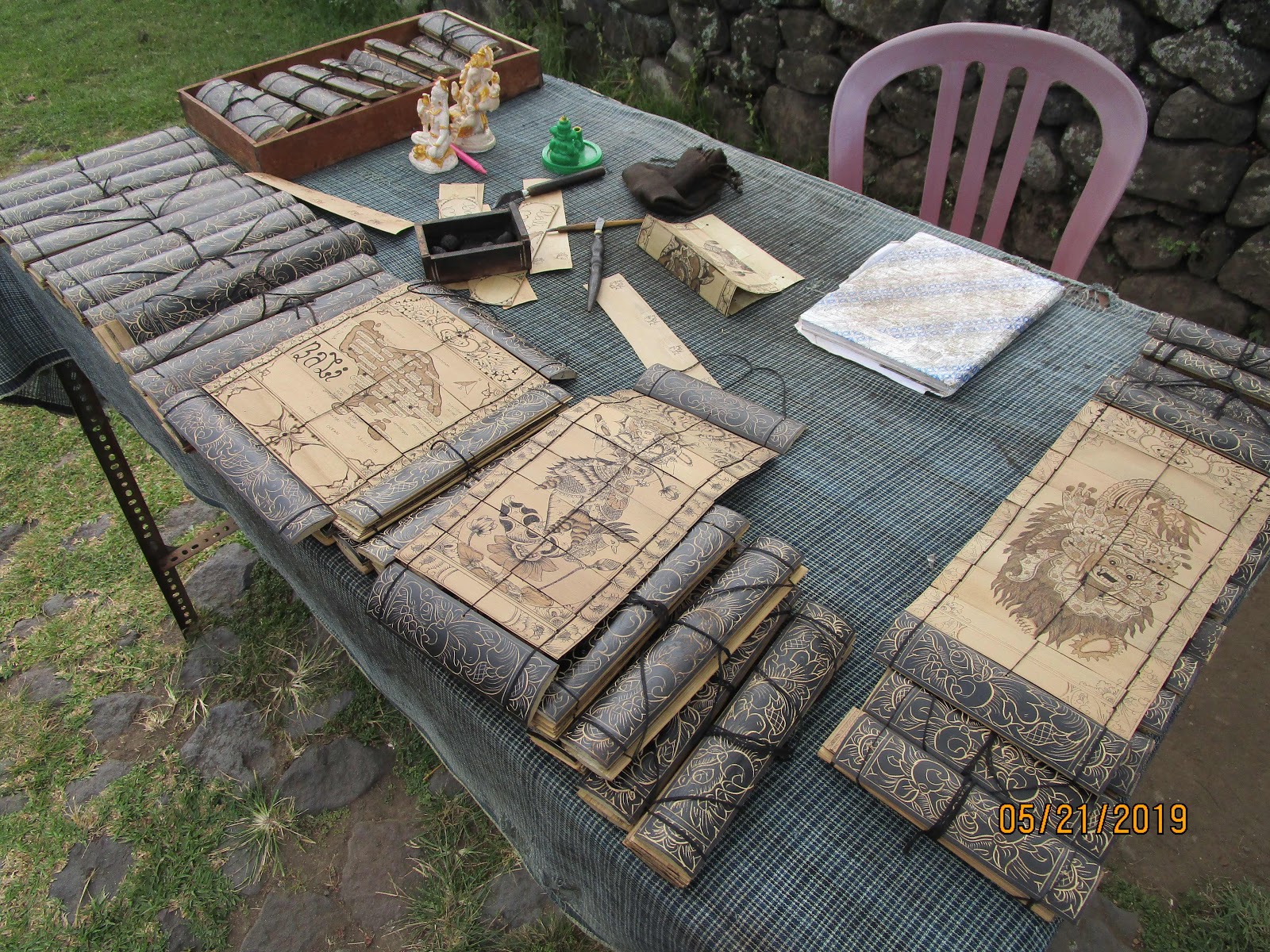 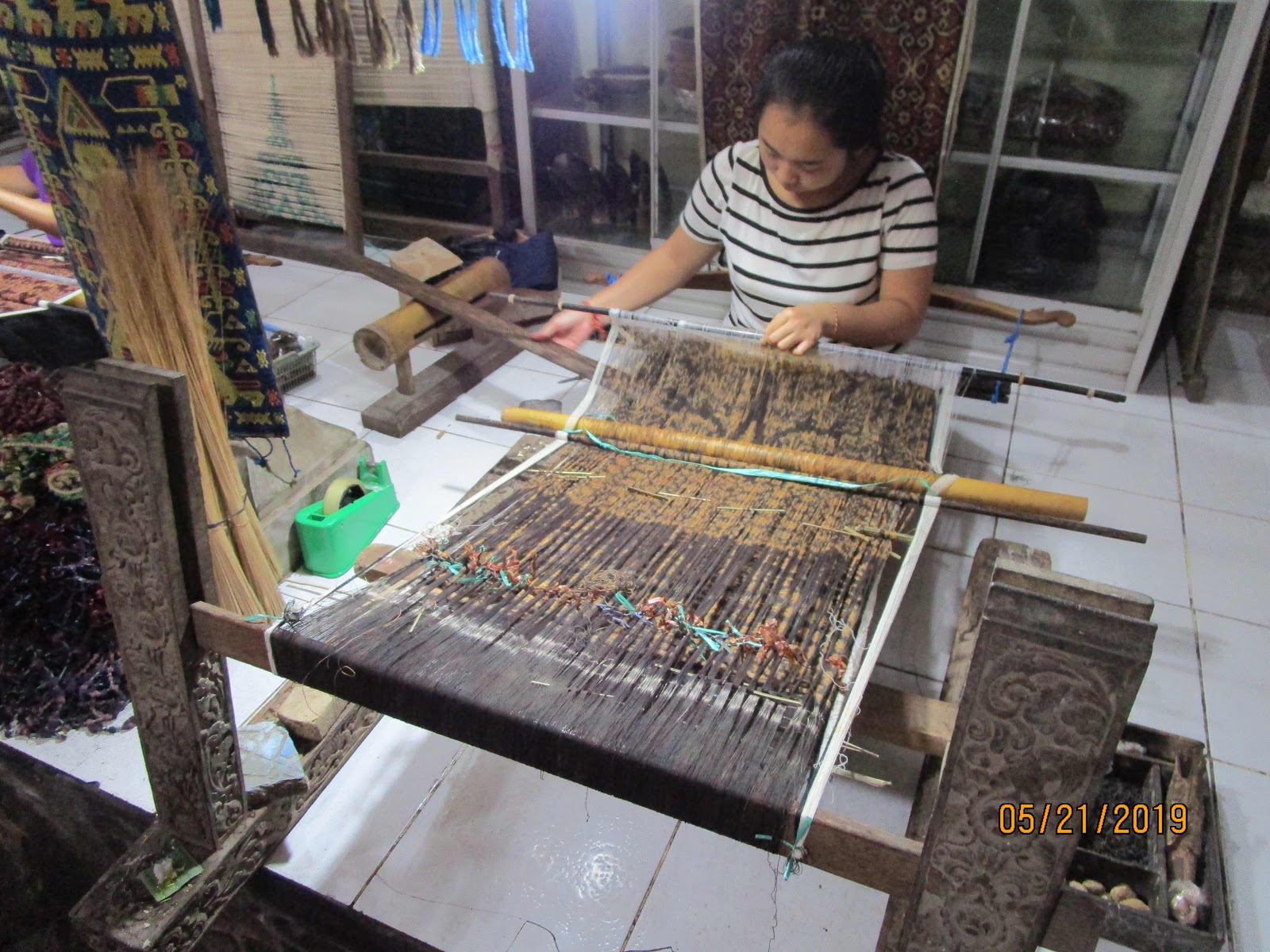 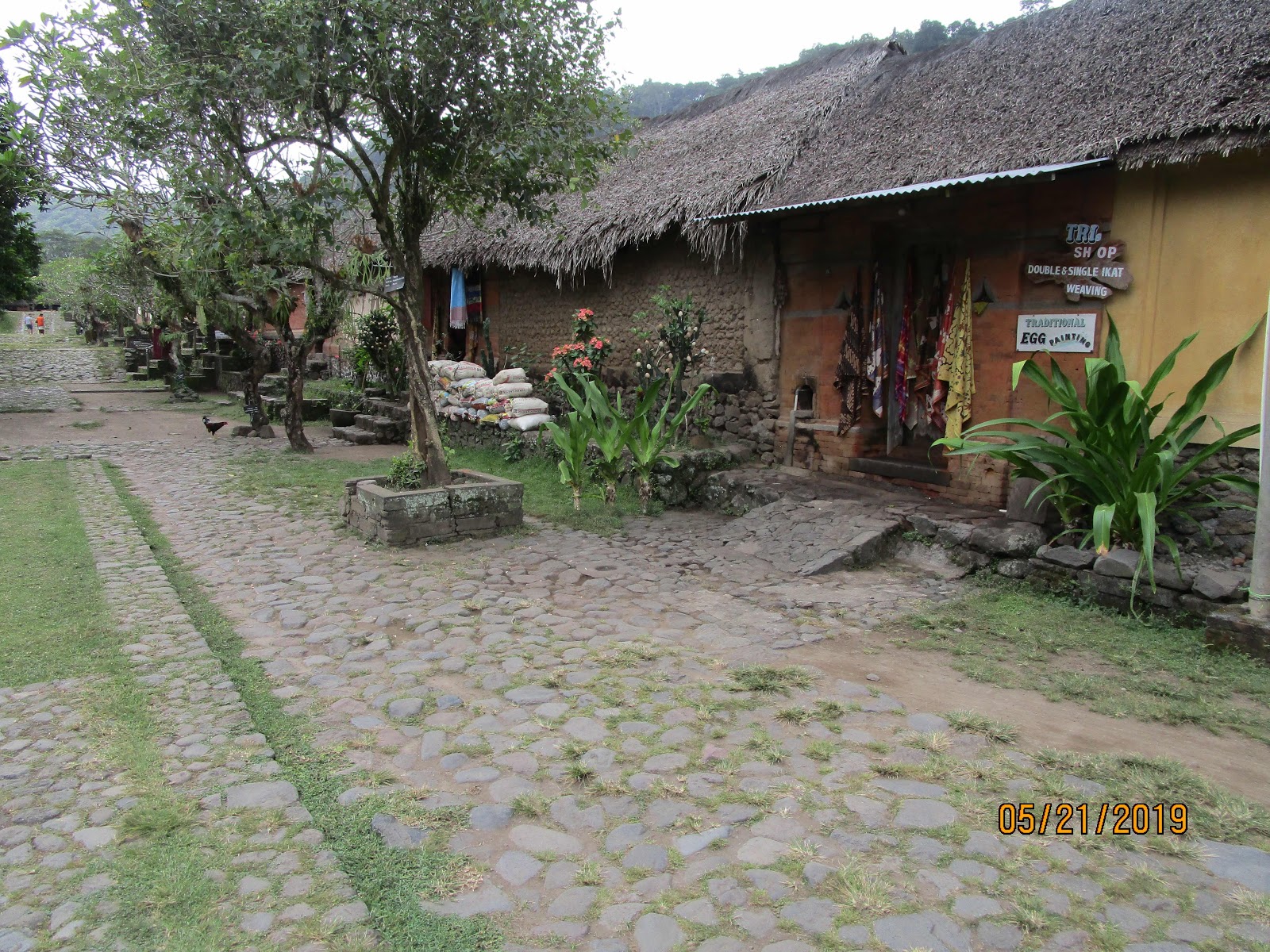 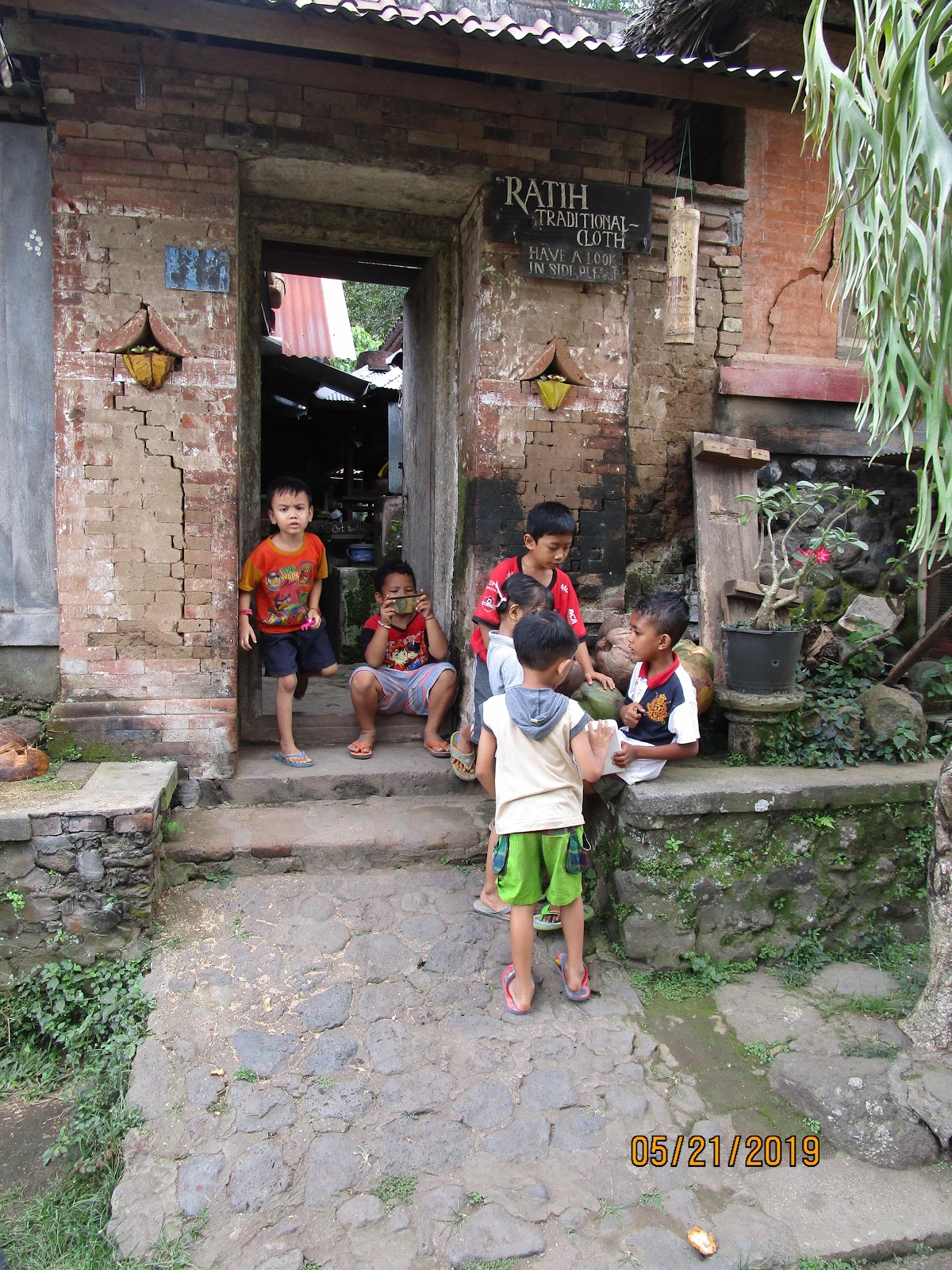 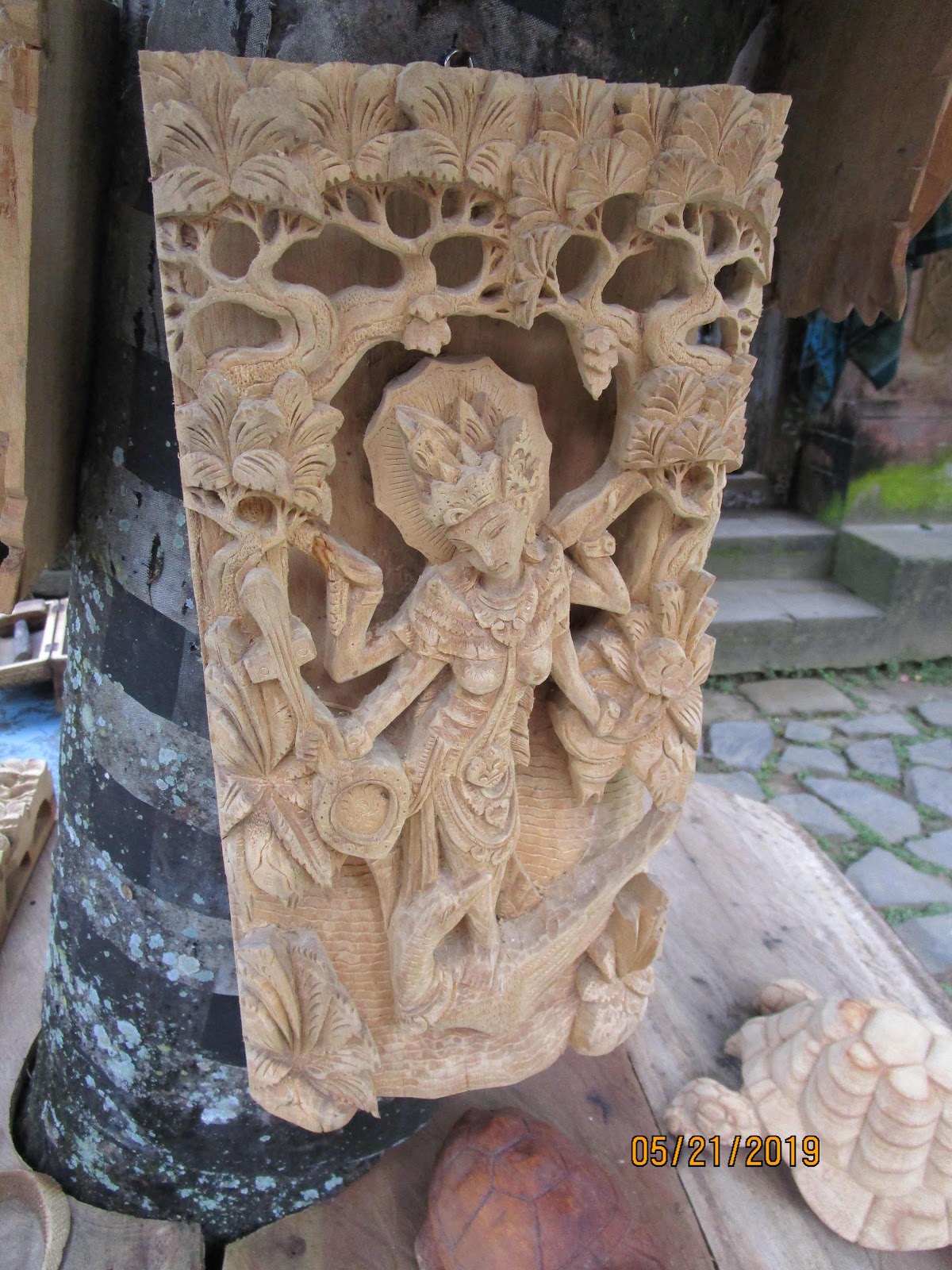 By early afternoon, we had made it to Amed, an area composed of several villages. The hotel we had chosen to stay at, the Ocean Resort Amed, was in a village further out. It looked fresh, new, clean and right on the ocean - and when they showed us to our room, we felt confident that we had made the right decision. 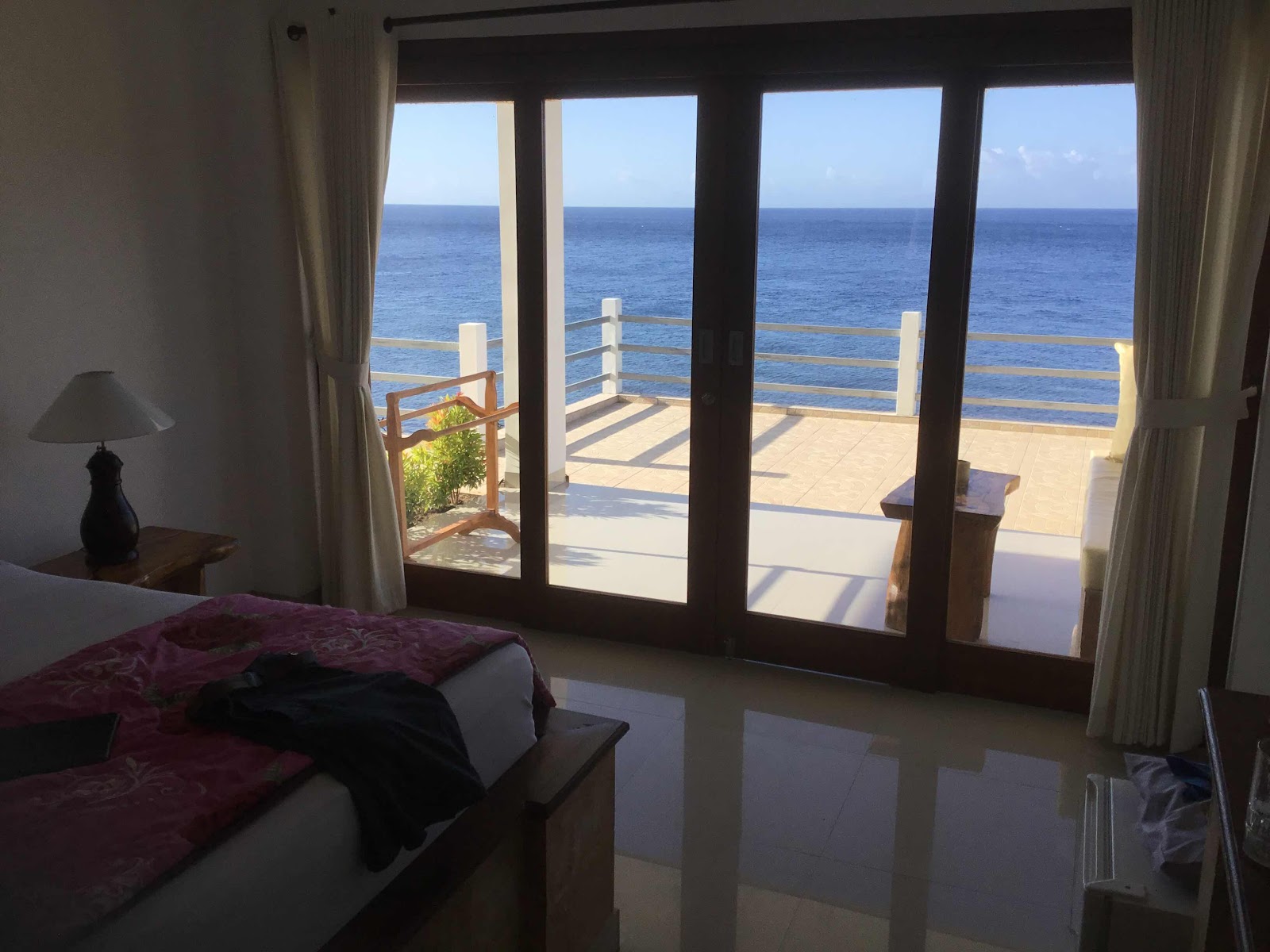 We soon met Marie and Alban, who worked for Fun Dive, one of the many dive shops in the area. I quickly set up a dive with Alban for the following morning.
Alban came by in the morning to pick me up for the diving. We were set to go to two dive sites - a wall and a WWII wreck dive. I soon found out that, although there were others diving, they were with their own guides. For my dives, it was just going to be Albin and I - perfect.
Alban surprised me when he told me that the dives were done from the beach, something I had only done once in forty years of diving. It was about a twenty minute drive to the dive spot. It turned out that the wall dive and the wreck dive were next to each other. (The photos below are not ones I took.) 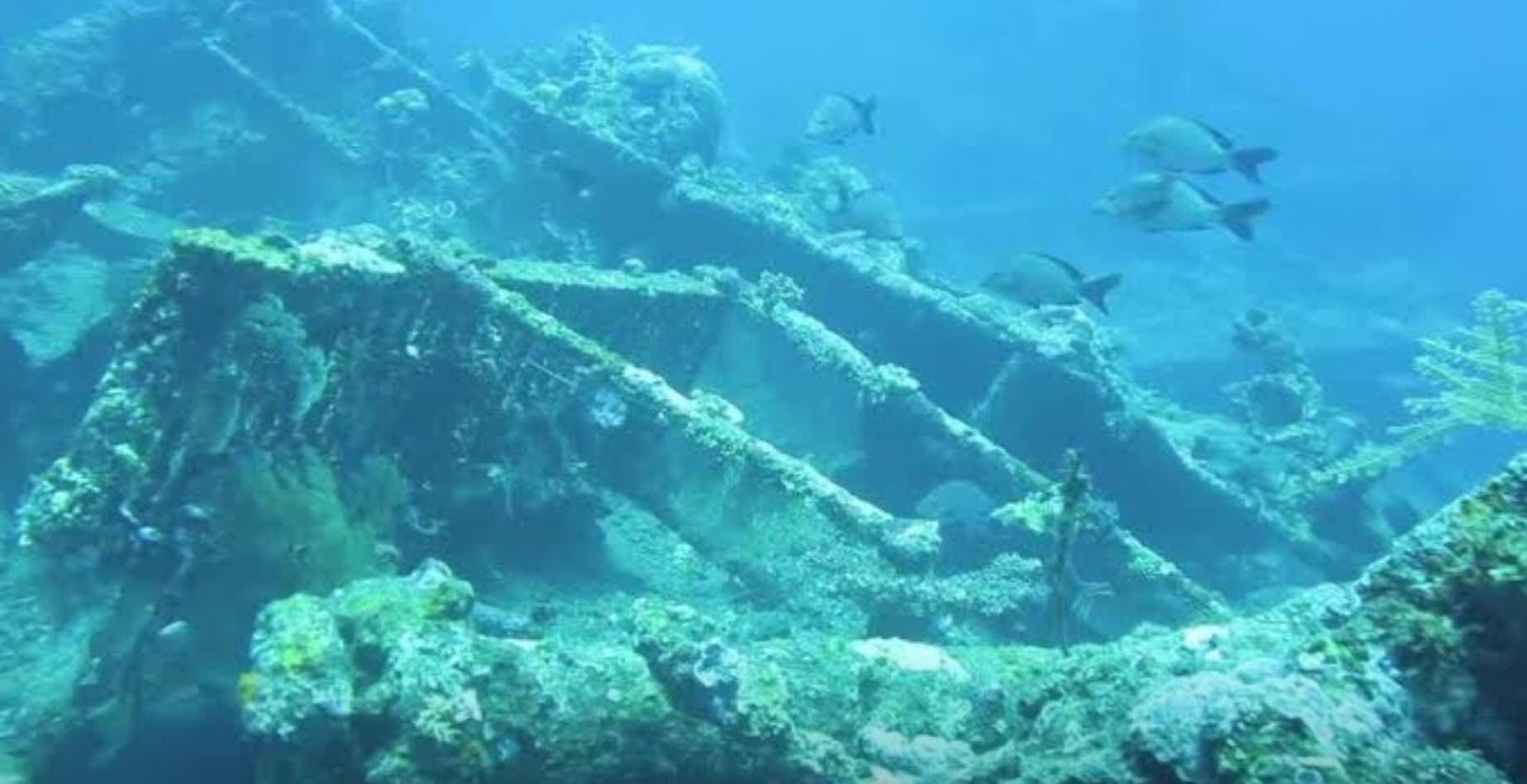 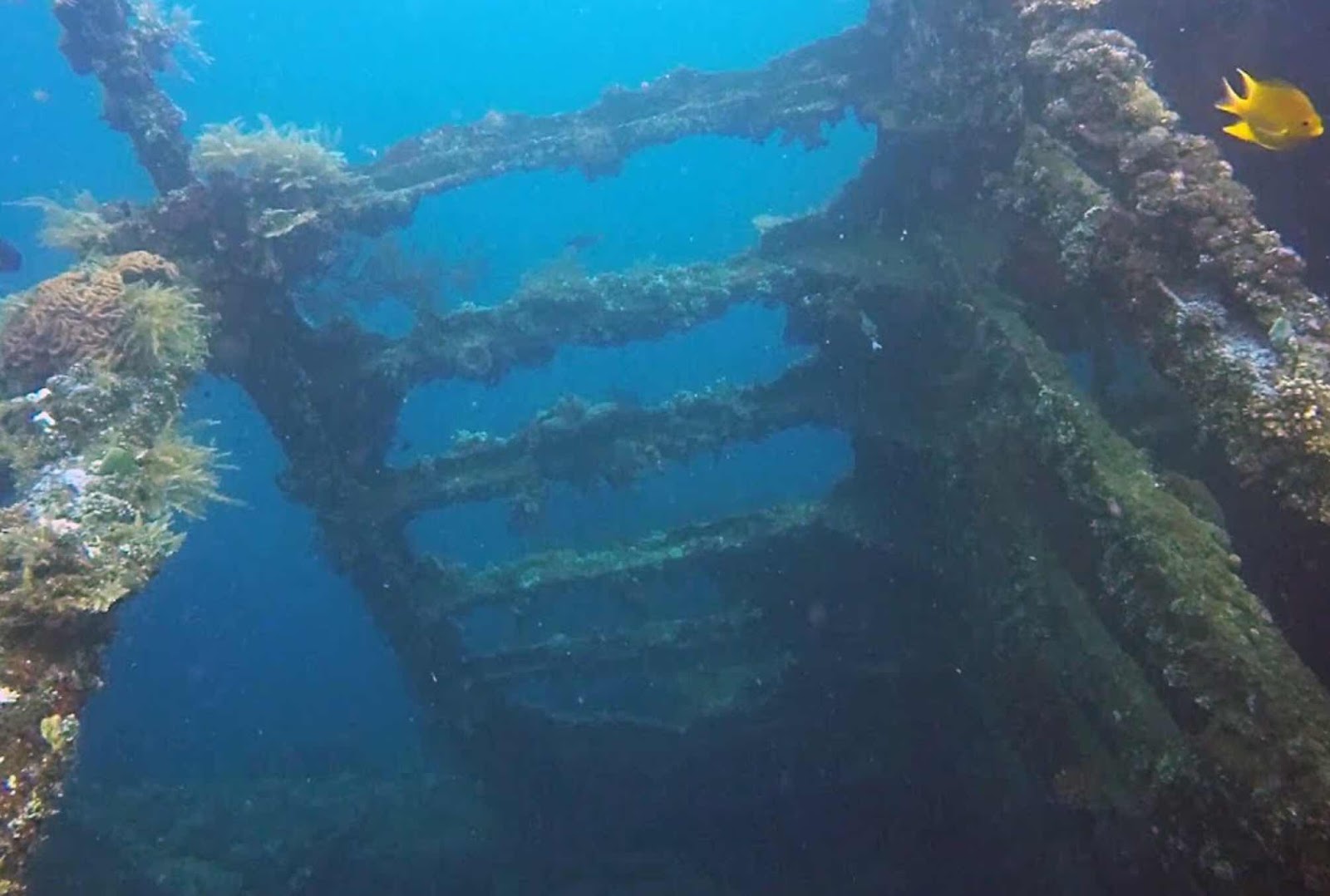 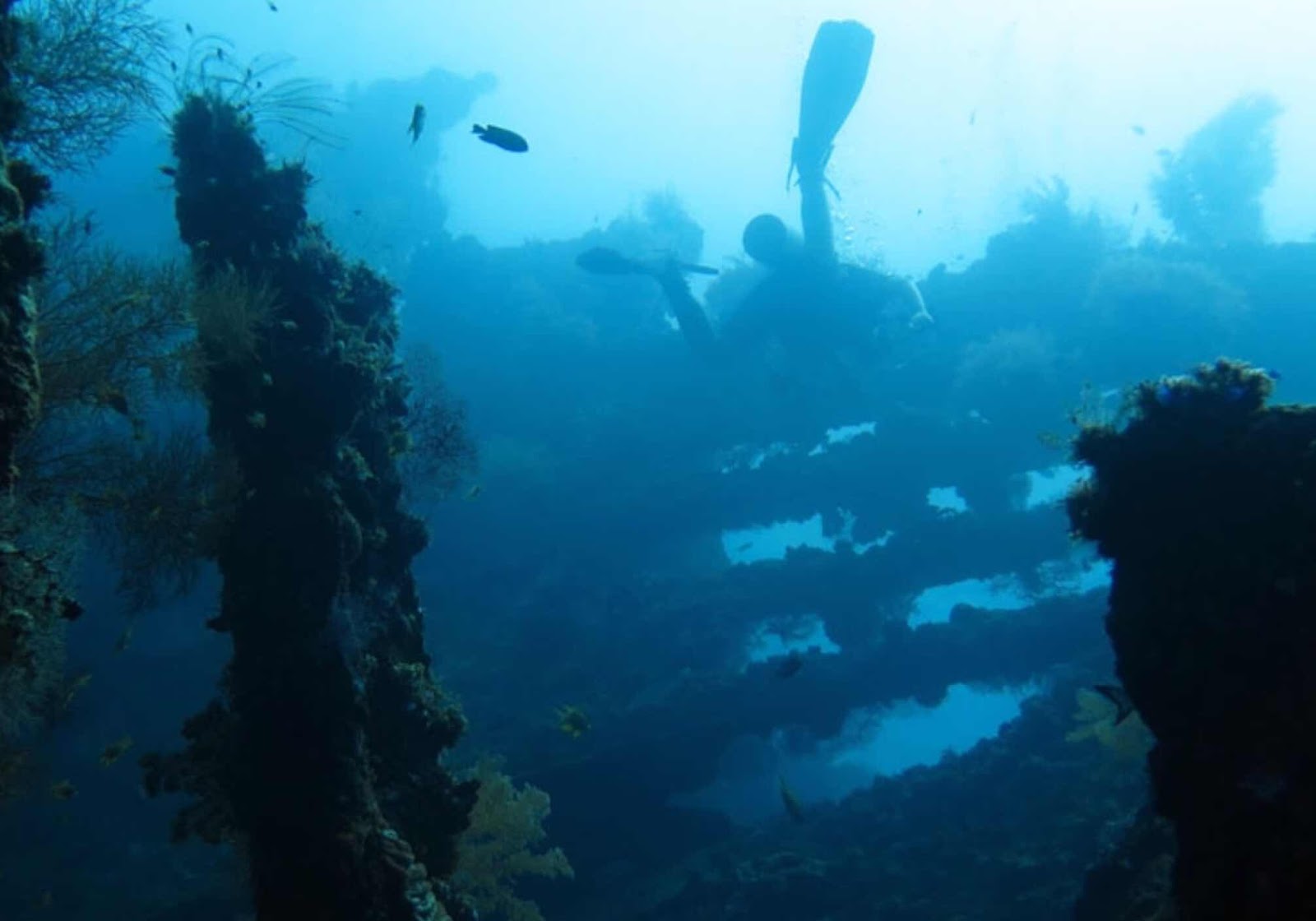 The wall dive was good but not superb. Decent coral and colorful mix of tropical fish. But later, when diving the USS Liberty (not to be confused with a Liberty-type ship), things were way different. Apparently, the wreck had provided the perfect environment for all sorts
of coral and fish to thrive. Beautiful soft and hard coral, fans and other sea life were on display. Colorful fish, slugs and garden eels abounded. Since the wreck was splayed wide open, there were were no compartments or structures to dive into. Regardless, it was a superb dive site that was thoroughly enjoyable.
One late afternoon, just before sunset, we rode our scooter to the Sunset Point Restaurant for a Bintang beer and to view the sunset. With the restaurant being pretty crowded, we opted to leave after the impressive sunset and venture to another place for dinner. That was an unfortunate decision because right after we left, Agun, the enormous volcano that looms over Amed, roared to life. After a sudden burst of thunder, lava and smoke spewed out of its crater. We missed the show but were told about it the following morning. Fortunately, we were on the windward side = several villages on the leeward side had been evacuated. 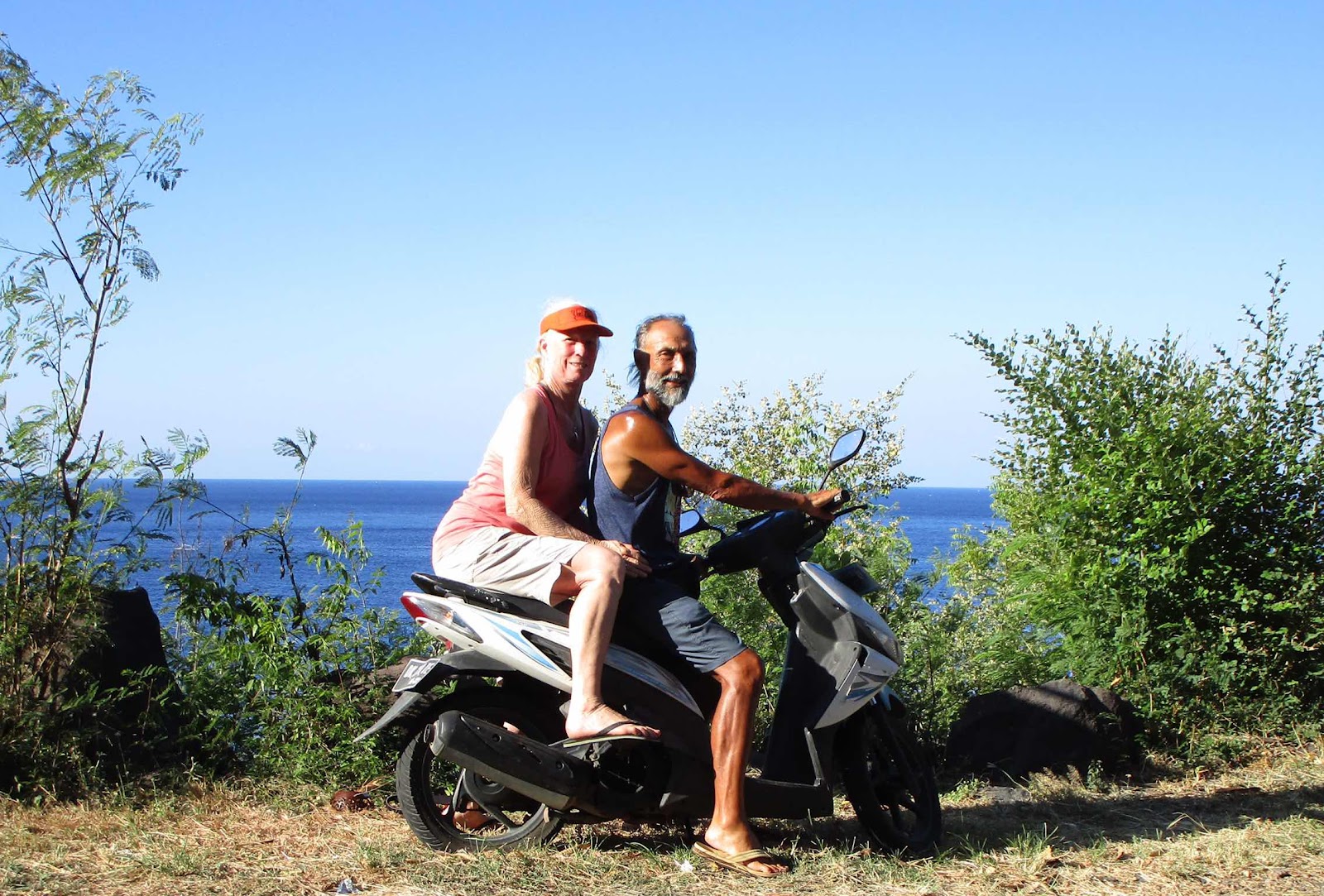 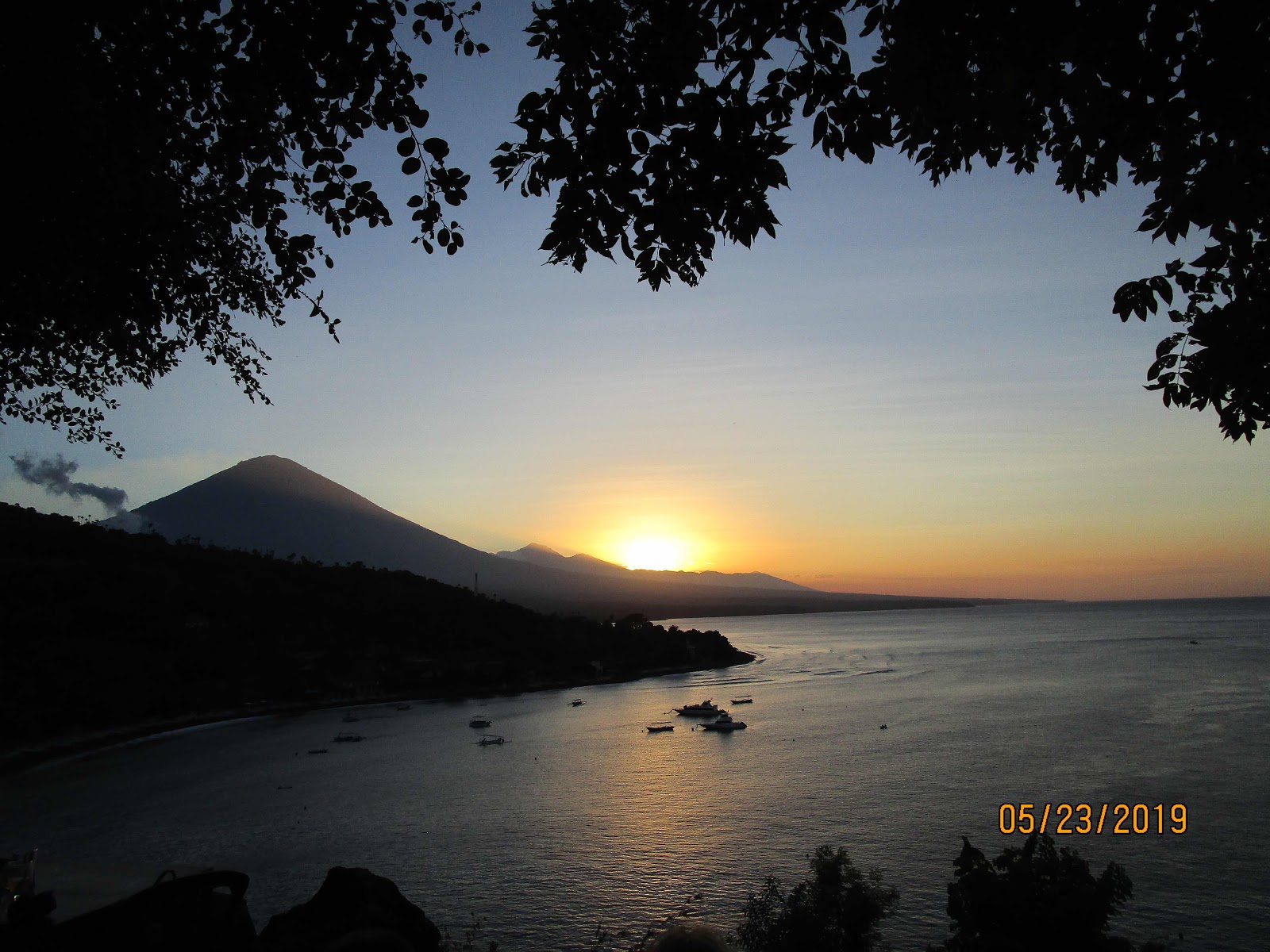 Agun (means “big” in Indonesian) is the mountain/volcano to the left.

The one outstanding restaurant that we found in Amed was recommended to us by Marie and Alban. The Galanga, a French restaurant with Indonesian fusion flare, is an unassuming looking restaurant. On the day we went, we got lucky - we didn’t have reservations, but got seated at one (of two) private tables (as long as we were done by 8pm). We had one of the very best dinners of the entire trip. 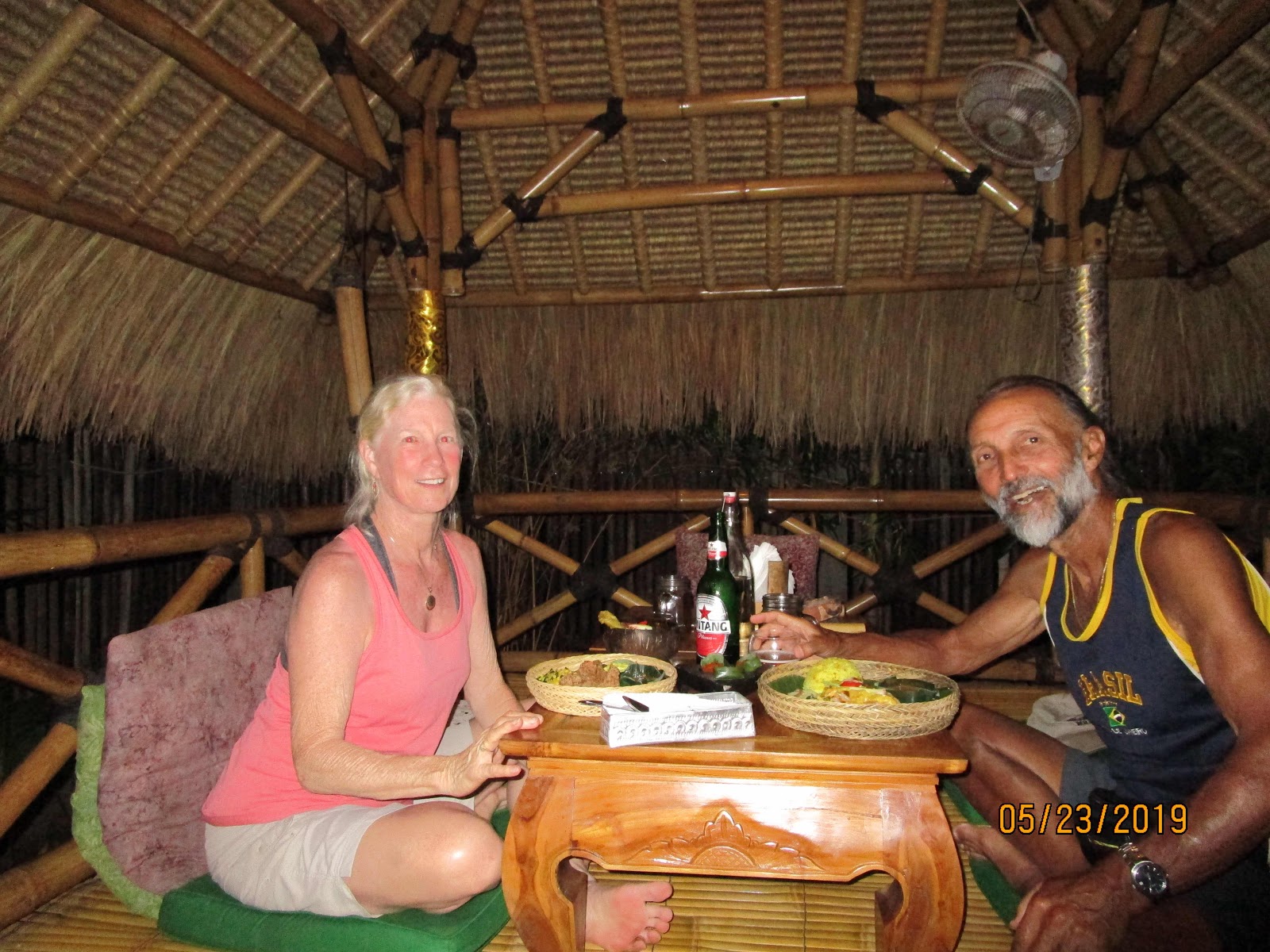 After five days in Amed, it was time for us to say good-bye. Nyoman was there at 11am to take us back to Denpasar.
Our last evening was spent at the Garden Inn Hilton, which surprised us with how good it was. It had an enourmously long pool, a well-equipped gym, a fabulous breakfast buffet and it was right next to the airport for our long flight home.
Posted by George at 2:03 PM No comments: